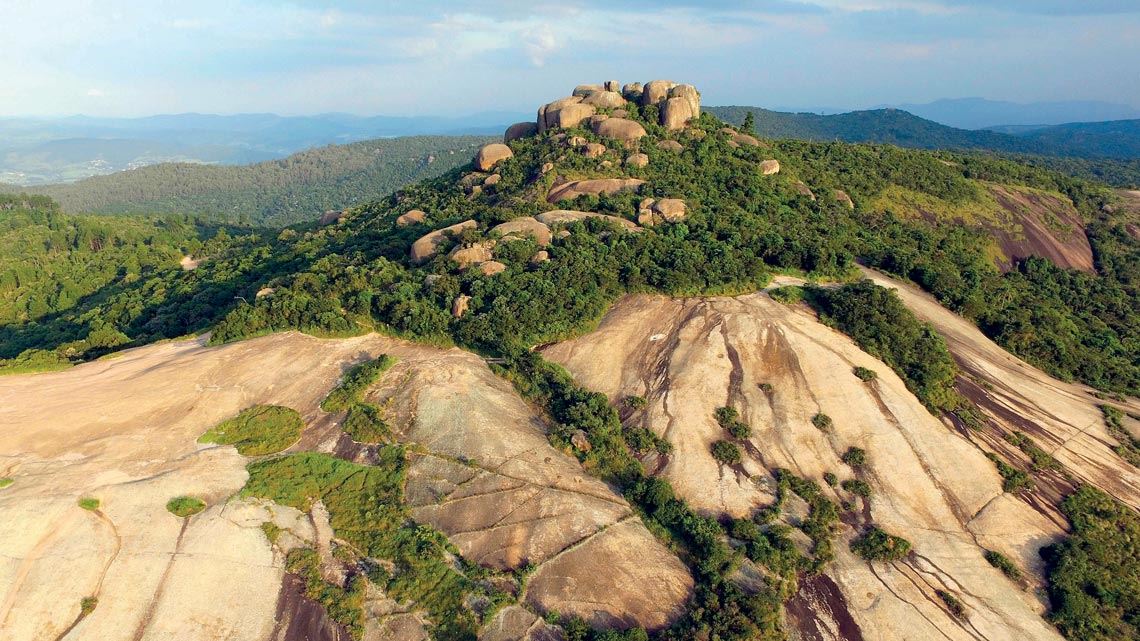 View of Itapetinga State Park, in Atibaia, one of five conservation units established with the use of BIOTA data

he Paranapanema River, considered one of the least polluted in the state of São Paulo, has been better protected since 2012, when its approximately 1,000 springs and streams became part of the Nascentes do Paranapanema State Park. Comprising 22,500 hectares, the conservation unit contains and protects the rich flora and fauna of the Atlantic Forest in the municipality of Capão Bonito—230 kilometers distant from the city of São Paulo—where jaguars, southern muriqui monkeys, and, even the extremely rare bush dog (Speothos venaticus) still roam. This March three specimens of the canid were captured by the lenses of a camera trap installed in the region by Fundação Florestal, an agency of the Secretariat for Infrastructure and Environment (SIMA) of the state of São Paulo. A year prior to establishing the reserve in Capão Bonito, four conservation units were created in the Serra da Cantareira region: Itaberaba State Park, Itapetinga State Park, the Guarulhos State Forest, and the Pedra Grande Natural State Monument.

All of these conservation areas result from the work of the BIOTA-FAPESP program, which celebrates its first 20 years in 2020, though it was created 21 years ago. The legislation that established the conservation units justified the parks’ creation based on BIOTA research, citing a study that had been published in 2008 in partnership with the Environment Secretariat (the predecessor of the agency that became SIMA). Titled Diretrizes para conservação e restauração da biodiversidade do estado de São Paulo [Guidelines for the conservation and restoration of biodiversity in the state of São Paulo], the publication was also used by São Paulo state government to establish zoning parameters for the expansion of sugarcane cultivation, through Resolution No. 88, of 2008. The regulation used BIOTA biodiversity studies to define technical guidelines for licensing business ventures in the sugar-alcohol sector across the state. The areas were classified into four use-levels: Suitable, Suitable with Environmental Limitations, Suitable with Environmental Restrictions, and Unsuitable. The 18 legal instruments produced with the program’s support are available on the BIOTA website.

One of BIOTA’s goals since its creation was to strengthen the interface between science and public management, in order to support conservation policy legislation for the region’s remaining native vegetation, says biologist Carlos Alfredo Joly, one of the program’s creators and a continuing member of its steering committee. “At first, we somewhat naively thought it was enough to just make highly reliable data available, and they would be used in making public policy. But after about five years we realized we needed to translate scientific language into a format that was intelligible to decision makers,” Joly recalls. 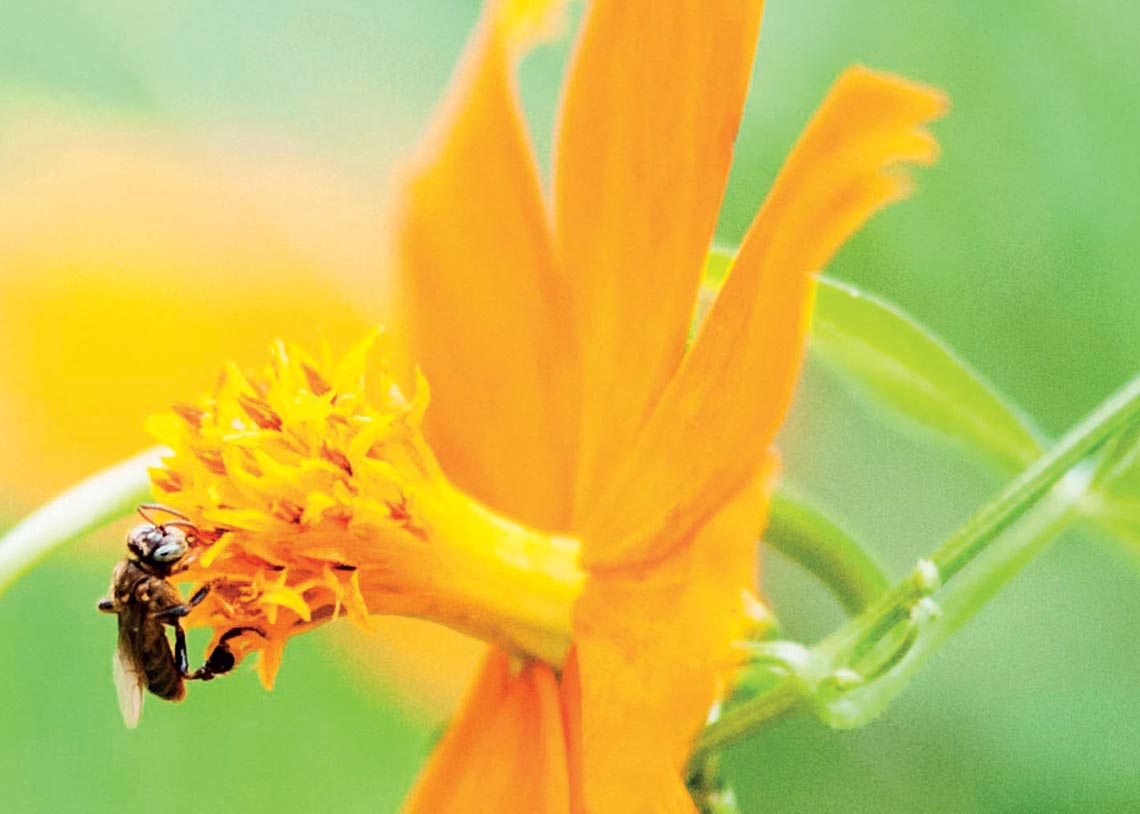 A workshop involving 160 researchers from public and private universities and research institutes in the state of São Paulo was held in November 2006 to meet this demand, which resulted in the publication of a book that still has an impact to this day. At the time, the Fundação Florestal board was led by agronomist Maria Cecília Wey de Brito, who had participated in BIOTA’s original conception from 1996 to 1999, and as a member of its steering committee, from 1999 to 2006. “It was her appearance on the committee that catalyzed this process of translating the data into a more useful format for decision makers,” Joly emphasizes. For Wey de Brito, who is today a project coordinator at Ekos Brasil Institute, an environmental NGO, the workshop and the publication it generated were important milestones for the sector. “Out of this event came the proposition of making viable public policy based on the science produced by BIOTA,” the agronomist observes.

According to biologist Ricardo Ribeiro Rodrigues, from the Luiz de Queiroz College of Agriculture at the University of São Paulo (ESALQ-USP) who is also a member of BIOTA’s pioneer steering committee, the book’s production took close to two years and included the development of 27 thematic maps and 3 synthesis maps. The first of the synthesis maps, aimed specifically at researchers, identified knowledge gaps regarding biodiversity in São Paulo. A second map suggested areas that, because of their natural characteristics, could be converted into conservation units. “We identified 22 areas, 13 of which were priorities. In these areas, seven conservation units have been created so far,” Rodrigues says.

The third of the synthesis maps showed the fragments of native vegetation existing on private properties whose characteristics, such as their small size, did not justify conversion into Fully Protected Conservation Units. This is not to say that these areas were less valuable. Protecting and interconnecting these fragments to restore ecological corridors is vital for biodiversity. Surveys conducted within the BIOTA framework by researchers from ESALQ and the USP Biosciences Institute (IB) indicate that 78% of the natural vegetation in the state of São Paulo is found on private property.

More recently, through geographic data and mathematical models, researchers working on a project coordinated by ESALQ agronomist Gerd Spavorek evaluated the distribution of vegetation deficits in the state of São Paulo. They then outlined possible scenarios for compensating for these conditions through the creation of legal reserves, i.e., areas of natural vegetation within rural properties that may only be exploited using sustainable means. In this way, landowners with vegetation deficits could regularize their property status. The project was born out of a demand from SIMA’s predecessor agency, with input from civil society. Since 2017, researchers have held eight open meetings with representatives from government departments, the agricultural sector, non-governmental organizations, universities, and research institutes, among others. To provide greater social transparency for the work, a website was created, as well as channels on YouTube and Instagram. 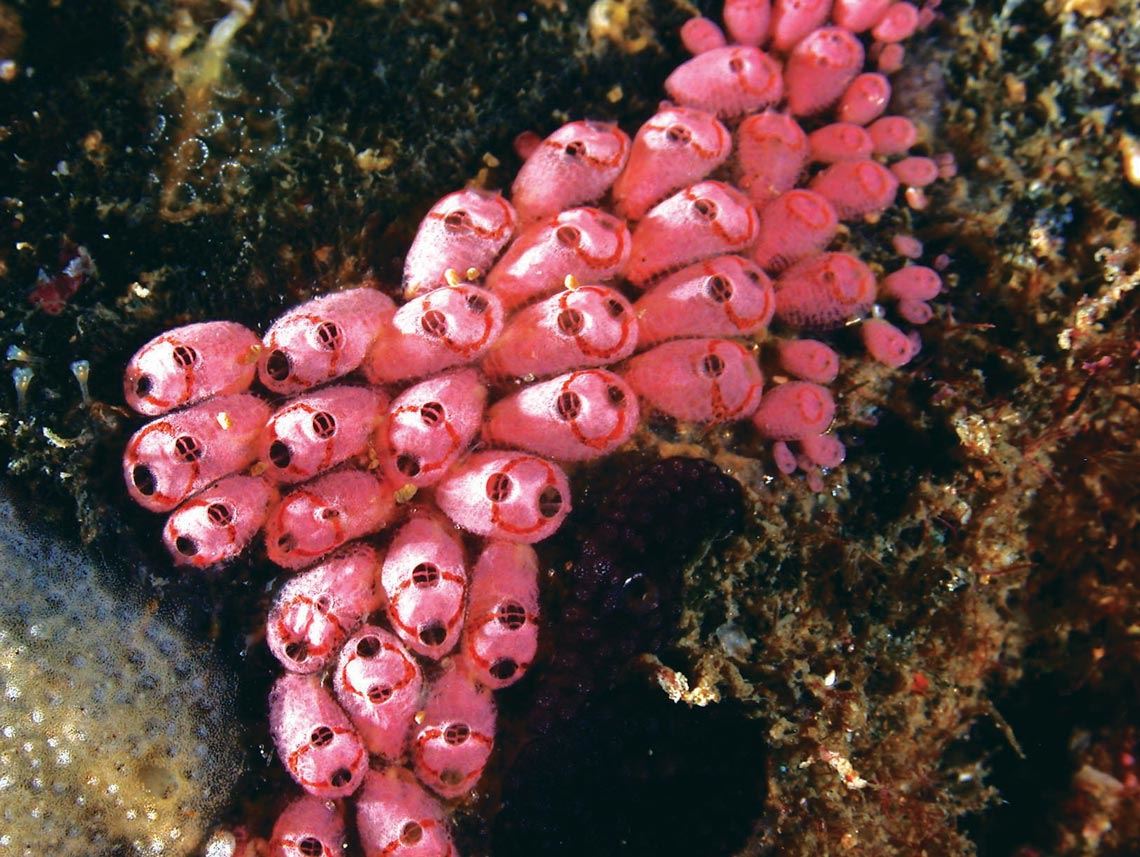 For Rodrigues, the project’s results show that it is possible to develop environmental protection strategies without compromising agricultural production. The proximity of native vegetation can increase crop productivity. “There are studies showing that coffee plantations located close to areas of native vegetation have 20% to 30% higher productivity,” the researcher notes. The secret lies in pollination. Pollinating agents, such as bees, butterflies, beetles, birds, and bats, provide valuable work free of charge to the farmer. This is what known in biology as an ecosystem service.

In early 2019, biologist Kayna Agostini of the Federal University of São Carlos (UFSCar) participated in a survey that calculated a value for the ecosystem service of pollination in Brazil. The result was impressive: US$12 billion a year, almost R$65 billion at current exchange rates. “This is a value estimate of the ecosystem service of pollination, taking into account the dependence on pollinators and the value of agricultural crop production,” says Agostini. She explains that most of the plants used for food production in Brazil (76%) depend, to varying degrees, on these pollinating agents to generate fruits and seeds, and to maintain genetic variation.

The study was published in the “Relatório sobre polinização, polinizadores e produção de alimentos no Brasil” [Report on pollination, pollinators, and food production in Brazil], which included a Summary for Decision Makers written in non-technical language. The initiative was organized by the Brazilian Platform on Biodiversity and Ecosystem Services (BPBES) in partnership with the Brazilian Network of Plant-Pollinator Interactions (REBIPP), where Agostini is a coordinator. The report is an important tool for providing scientific support in documents aimed at developing public policies that protect pollinators. “One example of this is the documentation on the objectives, goals, and indicators regarding pollinator conservation that will be submitted to the Convention on Biological Diversity (CBD), and could assist in discussions at the Conference of the Parties to the UN Biodiversity Convention (COP 15) that will take place in China in 2021,” Agostini says.

Data produced by BIOTA has also provided the scientific basis for discussions on the potential environmental impacts resulting from infrastructure projects. Expansion of the port of São Sebastião on São Paulo’s northern coast was halted in 2015 after studies BIOTA conducted indicated that such an intervention would endanger the fauna in Araçá bay, which had until then been considered by some to be dead. “The bay contains a huge diversity of species; it’s an open-air laboratory,” comments biologist Cecília Amaral from the University of Campinas (UNICAMP), who coordinated a multidisciplinary project that studied the coastal ecosystem. “We identified more than 1,400 species of invertebrates and vertebrates there, including one new family, two new genera, and 50 new species.” 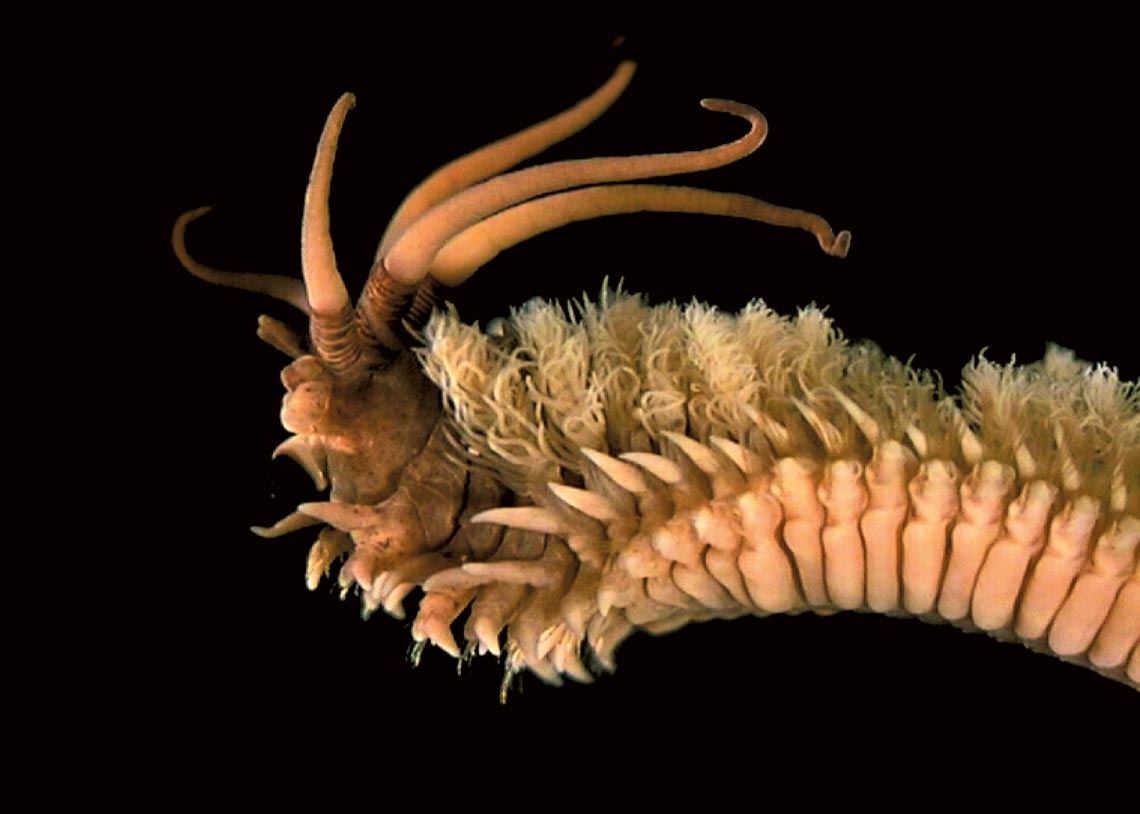 Completed in 2017, the Araçá Bay project also left a legacy for the academic field: the data on marine fauna in the state of São Paulo that were collected in the study. Currently, Amaral is working on developing the second volume of the Manual de identificação dos invertebrados marinhos da região Sudeste-Sul do Brasil (Identification manual for marine invertebrates in the Southeastern and Southern regions of Brazil), which will be augmented with material from a variety of research projects, including BIOTA Araçá. At the moment, she is coordinator of another BIOTA initiative whose goal is to conduct taxonomic refinement work on the Zoology Museum collection at the UNICAMP Institute of Biology, and fill in any gaps in the identification of collected species. The results will be available on the SpeciesLink collaborative network, which was developed by BIOTA and is coordinated by the Reference Center for Environmental Information (CRIA), a Civil Society Organization of Public Interest (OSCIP) (a type of government-registered NGO) created in 2000, in the early days of BIOTA.

At the time of CRIA’s launch, a system began being developed to receive and share species-occurrence data for holdings in biological collections throughout the state of São Paulo. “Today, the SpeciesLink network includes collections not only from São Paulo, but from all over the country and abroad,” says Dora Ann Lange Canhos, CRIA’s director and one of BIOTA’s founding scientists. Currently, the network has 1.2 million records on more than 28,000 different species found in São Paulo State. “This entire collection is available online to public managers and has been used in various ways, such as in the production of threatened species lists, environmental diagnoses, and conservation policies,” Canhos observes.

Solutions in nature
“The BIOTA program has an enormous amount of data, all of which are freely accessible,” points out biologist Jean Paul Metzger, from IB-USP. “By synthesizing the data generated in the field and the lab, it’s possible to increase knowledge, and foster transformative research at the border between science and politics,” says Metzger, who is leading a new approach for BIOTA that has the potential to increase the program’s impact in society. Named BIOTA Synthesis, this nascent line of work aims to collaboratively analyze the available data on a specific subject and use the resulting set of multidisciplinary data in the search for solutions to socio-environmental problems.

The research carried out within its scope must meet SIMA requirements as well as those of the state’s Department of Agriculture and Supply, and Department of Health requirements. BIOTA Synthesis is divided into five thematic groups: pollination and agricultural productivity; forest-based economy and restoration; water security in the face of climate change; regulation of zoonotic diseases; and disease prevention in urban areas. “It’s important to make it clear that initiatives like the synthesis center aren’t going to replace our data collection and biodiversity characterization projects. They’re just going to add a new type of activity,” Joly emphasizes.