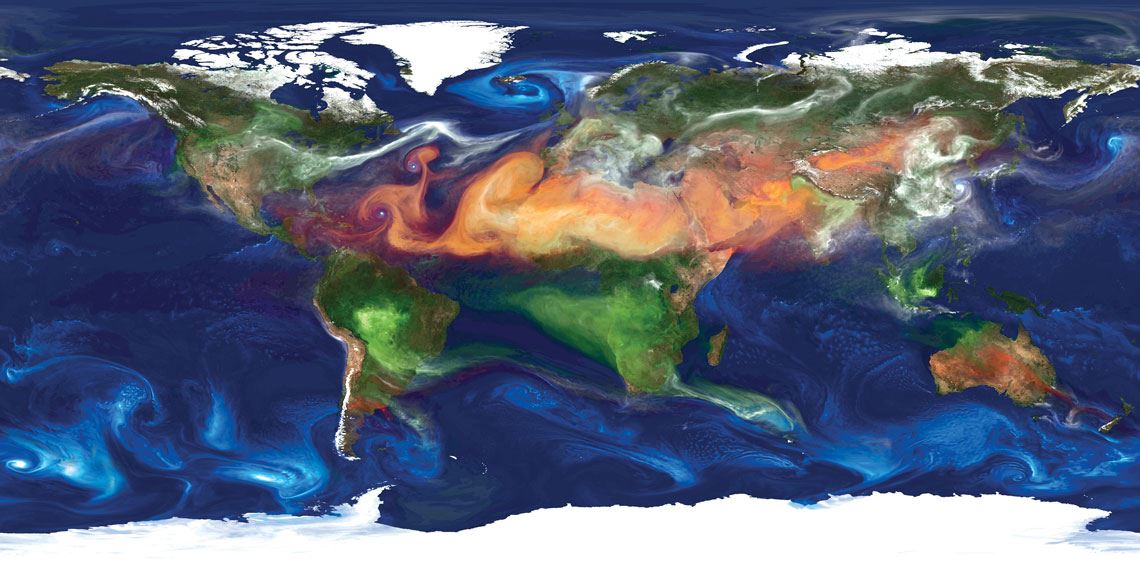 After greenhouse gases such as carbon dioxide (CO2) and methane (CH4), the small particles suspended in the atmosphere known as aerosols are humankind’s greatest influence on the global climate. Since the pre-industrial period ended in the mid-nineteenth century, the average temperature of the earth’s surface has increased by about 1.1 degrees Celsius (°C), according to the most recent report by the Intergovernmental Panel on Climate Change (IPCC), published in August this year. This increase would have been greater (around 1.6 ºC) if there had been no aerosols in the air, many of which were released by human activities and are classified as a form of pollution.

Aerosols—a technical term that covers a wide range of particles of varying sizes and compositions, whether natural or anthropogenic in origin, that are produced by human activities and suspended in the atmosphere—reduced the global warming caused by greenhouse gases by 0.5 ºC. “Aerosols mask a third of the global warming that has already taken place,” says Paulo Artaxo, a physicist from the University of São Paulo (USP) and one of the authors of the IPCC report who studies the role of aerosols in climate dynamics.

In the definition adopted by the IPCC, aerosols are suspended particles with diameters ranging from a few nanometers to a few micrometers. Due to their characteristics and composition, the half-life of these particles in the troposphere, the region of the atmosphere closest to the Earth’s surface, varies from days to weeks. They have a short-term effect on the climate, especially when compared to the thousands of years that CO2 remains in the atmosphere. But its influence may surpass local climate impacts.

Aerosols alter the planet’s energy balance in two ways. They influence the atmosphere’s temperature by scattering or absorbing solar radiation to varying degrees and interacting in the cloud formation process, thus affecting how rain is formed, an intricate climate mechanism not yet fully understood by science. “Aerosols are the basis of the condensation nuclei that form clouds and rain,” explains Artaxo, one of the coordinators of FAPESP’s Research Program on Global Climate Change (PFPMCG).

Deliberately increasing the production of these suspended particles in the atmosphere could offer a way of combating global warming if it were not for one hitch: aerosols produced by industrial and agricultural activities negatively affect air quality and are associated with a number of diseases and increased mortality (see article). According to the World Health Organization (WHO), urban air pollutants are responsible for about 7 million deaths per year. There is another obstacle that makes this strategy unfeasible. The human processes that typically stimulate the production of anthropogenic aerosols also tend to emit large amounts of greenhouse gases. It is no coincidence that the cooling effect of aerosols is more prominent in the Northern Hemisphere, which is more industrialized (and polluted) than the South, and in urban areas in general.

A study published by the US National Center for Atmospheric Research (NCAR) in the journal Geophysical Research Letters in July this year indicates that smoke from the large wildfires that occurred in Australia between late 2019 and early 2020 influenced the climate more than any other factor last year. “The main climate forcing of 2020 wasn’t COVID-19 at all,” said NCAR climatologist John Fasullo, lead author of the article, in a press release. “It was the explosion of wildfires in Australia.” 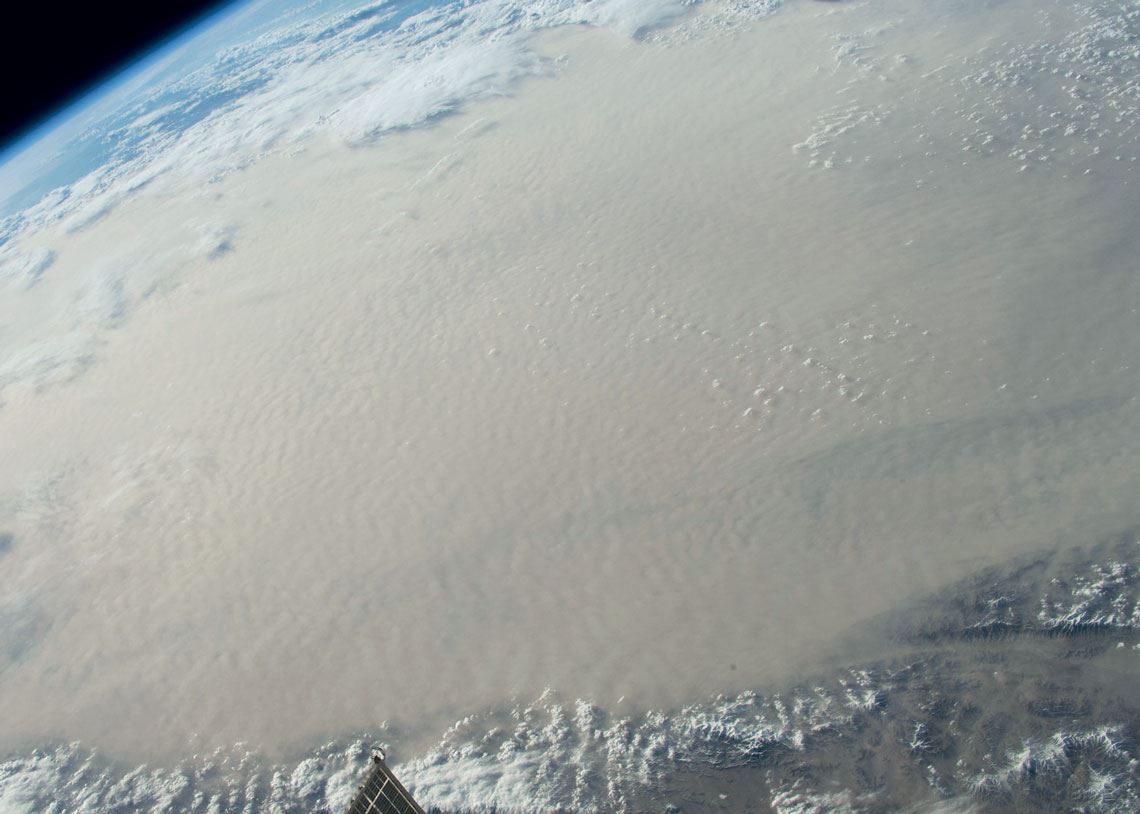 Sandstorms, like this one seen from space, are sources of aerosolsNASA

The burning vegetation in Oceania released aerosols that increased the brightness of the clouds, especially in late 2019. This increased the amount of sunlight reflected back into space. According to the study, the plume of particles from the fires in Australia cooled the global climate by 0.06 °C in 2020. The effects of the COVID-19 pandemic, which led to decreased industrial activity and greenhouse gas emission worldwide, also helped reduce warming.

Most aerosols, whether natural in origin or released by human activities, cool the climate by scattering and reflecting the sun’s rays, which would otherwise reach the Earth’s surface with greater intensity. In nature, volcanic ash, sea salt, and sand from deserts can all function as aerosols capable of cooling the climate. But according to IPCC data, the cooling effect is mostly caused by suspended particles produced or associated with human activities, such as those emitted by vehicles or the burning of fossil fuels.

Fossil fuels such as oil and coal release carbon dioxide—the main greenhouse gas—when burned, as well as sulfur dioxide (SO2), one of the precursors of sulfate aerosols. Between 2010 and 2019, this type of suspended particle alone contributed the most to reducing global warming, according to the IPCC report. Nitrate aerosols also encourage climate cooling, but to a lesser extent. They are generated by urban smog, now common in many major cities, or derived from ammonia, a compound present in agricultural fertilizers.

A minority of aerosols, however, actually absorb sunlight and warm the atmosphere. Known as black carbon, the smoke or fumes emitted by automobile exhausts and factory chimneys is the most significant type of suspended particulate matter, which in addition to polluting the air also raises the temperature of the atmosphere. It is produced by the incomplete burning of fossil fuels and biomass. Instead of reflecting the sun’s rays like light aerosols, black carbon absorbs them and heats the air. “Over the last two years, we have observed an increased amount of smoke in São Paulo from fires burning in the Pantanal and the Amazon,” points out physicist Eduardo Landulfo, head of the environmental laser applications laboratory at the Institute for Energy and Nuclear Research (IPEN).

For the last 20 years, IPEN has been using a radar to monitor atmospheric pollution, such as aerosols, via Lidar technology, which uses lasers to measure distances. Landulfo is in charge of operating the radar, which is part of the Latin American Lidar Network (Lalinet), and is one of the lead researchers in a FAPESP-funded project studying air quality and the climate in the São Paulo metropolitan area. In August 2019, radar data and satellite observations from the US Space Agency (NASA) were used to study a large plume of particulate matter created by fires in central Brazil that darkened the skies of Greater São Paulo for an afternoon, followed by heavy black rainfall in the region.

One type of suspended particle starting to gain more attention in science is bioaerosols, meaning aerosols of biological origin. Released from terrestrial and marine ecosystems, bioaerosols primarily consist of bacteria, pollen, fungal spores, algae, parts of plants and animals, and viruses. Some of these particles can release toxins or be pathological to humans. The SARS-CoV-2 virus, for example, can be found in aerosols. “Little is known about how bioaerosols influence the global climate,” says Fábio Luiz Teixeira Gonçalves, a biologist from USP’s Institute of Astronomy, Geophysics, and Atmospheric Sciences (IAG). Gonçalves, a doctor of meteorology, leads a study funded by FAPESP on how aerosols containing the bacteria Pseudomonas syringae, a pathogen of several agricultural crops, affect the formation of rain and ice nuclei in clouds between southern Minas Gerais and western Paraná. “These biological aerosols have an important influence on the occurrence of hailstorms, which negatively affect agriculture, in addition to impacting frosts,” explains the biologist.