Areport by the Organisation for Economic Co-operation and Development (OECD) shows that entrepreneurship among university students and recent graduates is highest in countries such as Canada, Australia, India, and Brazil. In these nations, students account for more than 10% of all entrepreneurs starting new technology companies—a rate higher than those of countries such as the United States, Israel, the United Kingdom, and France. The OECD evaluated the profiles of startups registered on Crunchbase, a database with information on approximately 447,000 innovative companies based in 199 countries. Only 290 startups were identified in Brazil, but 12% were founded by undergraduate students or recent graduates. Although they have a significant failure rate, these startups act as a gauge of how important innovation is to young people and of often they draw the attention of large companies interested in new business models.

In the countries analyzed, the gaming, transport, education, and e-commerce sectors were the most popular for student entrepreneurs. It is no coincidence that innovation in these areas is usually tied to software applications and low-investment ideas. Startups in sectors such as biotechnology, health, energy, and food are usually created by more experienced people who are studying or have already studied at the graduate level.

Rafael Ribeiro, director of the Brazilian Startup Association (ABStartups), believes that a number of interconnected factors explain the entrepreneurship of students and recent graduates in Brazil. “Young people tend to be more risk-tolerant and are often motivated by failure,” he says. “In addition, the current economic crisis makes entrepreneurship and potential financial independence an attractive prospect.” According to the OECD report, student entrepreneurship has increased thanks to the success of startups that have grown into global giants such as Facebook, Microsoft, and Apple. Despite being exceptional cases, all three companies were started when their founders—Mark Zuckerberg, Bill Gates, and Steve Jobs, respectively—were undergraduates, and none of them completed their studies.

Computer scientist João Machini, 29, helped found three companies at the end of his undergraduate degree at the Institute of Mathematics and Statistics of the University of São Paulo (IME-USP). The most recent started four years ago is WorldPackers, a company that advertises volunteer work opportunities from around the world. “It is a collaborative system involving hostels, homestays, and NGOs [nongovernmental organizations], where travelers exchange skills for accommodation,” he explains. The platform has more than one million users who each pay an annual fee of US$49 to use the service. Machini, whose parents are both university professors, considered an academic career himself, but decided against the idea while working on his undergraduate research project. “Entrepreneurship is very dynamic. To understand how a new idea is being received, you really need to be close to your customer, and startups are better for this than big companies, which involve more bureaucratic internal processes.”

There is a growing trend of large companies such as Microsoft, Google, Telefónica, and Bradesco establishing programs that aim to accelerate technological development through startups (see Pesquisa FAPESP issue no. 226). “Big companies want to learn and absorb the new business models created by startups, many of which—such as Uber, Airbnb, and Brazilian company Nubank—have grown so rapidly that they are threatening traditional markets,” explains Jaercio Barbosa, coordinator of the School of Entrepreneurship (ESE) of the Brazilian Micro and Small Business Support Service (SEBRAE) in São Paulo. “Startup accelerators encourage young people to create new companies,” says Barbosa. Business incubators based in universities also play an important role. “These environments provide students with institutional support and expert guidance in the form of technological consulting, business administration, and commercial structuring,” explains Guilherme Ary Plonski, scientific coordinator of the Technology Policy and Management Center at USP. 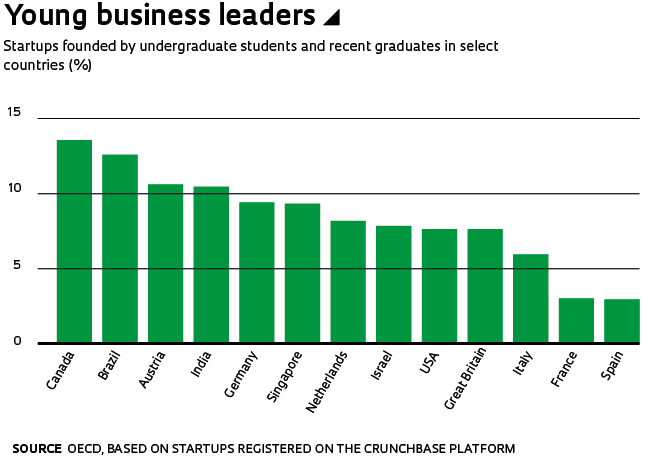 Founding a startup while still studying, however, can sometimes be a poorly timed and risky decision, says Mariana Zanatta Inglez, manager of the Business Incubator at the University of Campinas (UNICAMP). “Some students are not able to reconcile their studies with the life of an entrepreneur,” she says. “This can undermine their education, while they are not yet ready to run a company.” Alex Matioli, 27, studies business administration at UNICAMP and divides his time between classes, his job at a board game bar, and Rubian, the startup he founded in 2015. “The objective is to develop bioactive extracts for application in cosmetics and nutraceuticals (a type of food supplement).” The company is studying achiote and passionfruit features in partnership with UNICAMP and supported by FAPESP’s PIPE program. One obstacle that Matioli had to overcome was a lack of financial resources to get his company off the ground. “I did not want to rely solely on financial help from my parents, so I started working at a bar and saving money. The help of a business mentor, who later became a Rubian partner and investor, was also essential.”

A 2017 survey by SEBRAE found that only 28.4% of student entrepreneurs were studying a business-related subject at university, and at the institutions that offer such courses, just over half focused more on “finding inspiration” than on practical knowledge. “There are very few schools in Brazil that aim to train entrepreneurs,” says Jaercio Barbosa of SEBRAE. Another study conducted in 2016 by the universities of Bern and St. Gallen in Switzerland surveyed more than 122,000 students from universities in 50 countries. It found that 80.3% of the students intended to work as employees immediately after graduation. Only 8.8% said they wanted to start their own company after completing their studies. However, 38.2% said they would open a business five years after graduating—a period they deemed as enough time to take a graduate course or gain valuable work experience.

Maturity
Vinícius Freitas, a business administration student at the Institute of Education and Research (INSPER), took a two-year internship in the financial sector before starting his business. “I worked with experienced colleagues and this accelerated my learning. If I had started the company before taking the internship, the chance of it failing would have been higher.” Freitas, 24, is one of the founders of LiveHere, a Campinas-based startup that acts as a mediator between property owners and students. “Our platform simplifies the rental process for students, with no need for a guarantor or security deposit,” he explains.

The OECD survey shows that the proportion of startups founded by people with a doctorate is much higher in more developed countries such as Switzerland, Denmark, Germany, and the United States than in Brazil. In the United States, companies founded by individuals around the age of 40 tend to do better than those started by students in their twenties according to a study published on the National Bureau of Economic Research (NBER) repository in April by researchers from MIT and Northwestern University. “Older entrepreneurs often have a more specialized perspective, which is fundamental to developing more robust innovations,” says Lucimar Dantas, manager of the Business Incubator at the Alberto Luiz Coimbra Institute for Engineering Graduate Studies and Research at the Federal University of Rio de Janeiro (COPPE-UFRJ).

In Brazil, most student entrepreneurs are undergraduates or only have a bachelor’s degree as shown by the OECD survey. “This negatively influences the level of technological innovation at a company,” explains Fabio Kon, a professor of digital entrepreneurship at IME-USP and a member of FAPESP’s adjunct panel for innovation research. While Kon does not wish to discourage younger students from creating startups, he argues that we should openly discuss the limitations of student entrepreneurship due to the high failure rate of these companies and negative impacts on academic performance. Rafael Ribeiro of ABStartups notes that young entrepreneurs face a long and arduous journey. “Many tend to fail when they do not receive proper mentoring and help,” says Ribeiro. “Every student needs to learn how to build relationships with the startup community to help shorten their learning curve and enable them to validate their product or service with the consumer market.”