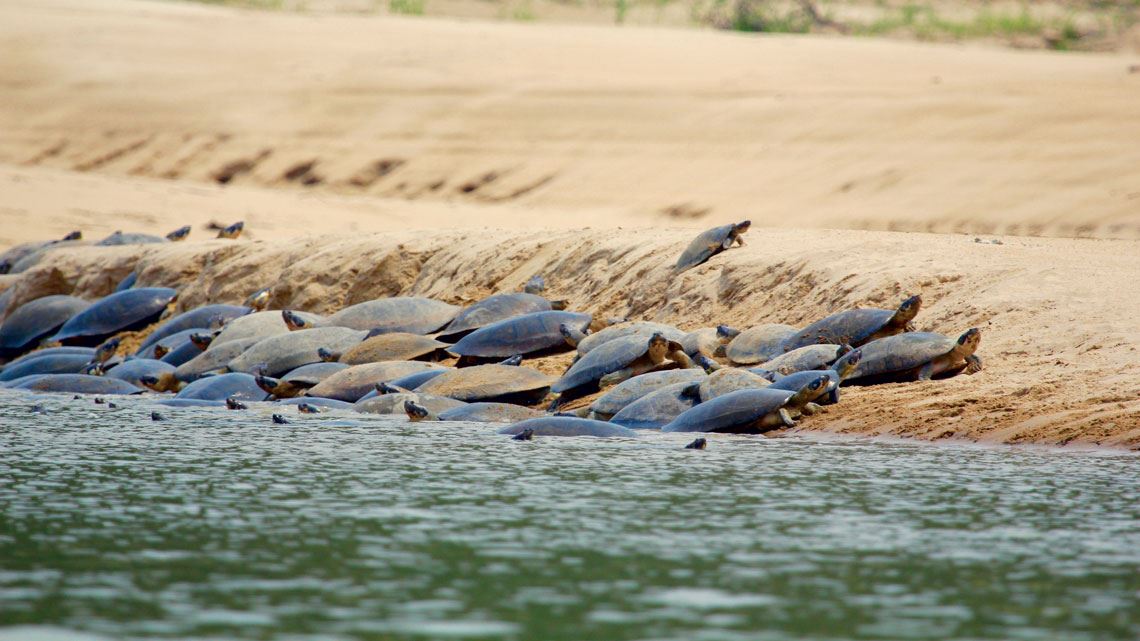 Additional resources have been provided to help protect an endangered Amazonian turtle species. The spawning period of the giant Amazon River turtle (Podocnemis expansa), during which the species behaves more gregariously and is more vulnerable to poaching, is being monitored with the aid of new integrated technologies. As well as sensors for recording environmental data and microphones and hydrophones to capture the sounds emitted by the animals, drones are being used to capture images of the spawning cycle. Cameras mounted on the unmanned aerial vehicles record each stage of the process, from the moment the turtles gather in groups in the river, to their arrival on beaches to lay their eggs, and their return when the young hatch.

The technologies are being used simultaneously as part of a project led by biologist Camila Ferrara of the Wildlife Conservation Society (WCS), a nongovernmental organization that operates in 164 countries worldwide. The study is supported by the Boticário Group Foundation (FGB). This is the first turtle conservation initiative to use the three technologies together, according to Ferrara, who has experience studying the giant Amazon River turtle. During her PhD (completed in 2012) at the Brazilian National Institute of Amazonian Research (INPA) in Manaus, she discovered that the species communicates by sound. Her research was only the second in the world to identify this means of communication between turtles.

Now, she is attempting to record communications between individuals by installing microphones in their nests and hydrophones on riverbeds. Environmental variables are monitored using electronic instruments called dataloggers, which measure the temperature in the water and the nests. Information about the river level is collected by the Brazilian National Water Association (ANA). Biologist Camila Fagundes, who also works with the WCS and is a specialist in Geographic Information Systems (GIS), is responsible for operating the drones and analyzing the images they capture.

The giant Amazon River turtle is distinguished by its social behavior and movement in groups. The females emit low-frequency, far-reaching sounds when grouping together before spawning, as a way of calling out to those who are farther away. When they leave the river, the sounds are slightly higher in frequency, used to organize their movement towards the beach. “They leave the water almost in single file,” says Ferrara.

The researcher’s current project was granted funding by the FGB as the result of a 2019 call for proposals. One of the requirements was the use of innovative methodologies in nature conservation. “There were no other research proposals with these characteristics related to turtles. Initiatives like this bring technology to conservation,” says biologist Karynna Tolentino, an  environmental research analyst at the foundation. Planned to last two years, the project was awarded R$190,000. 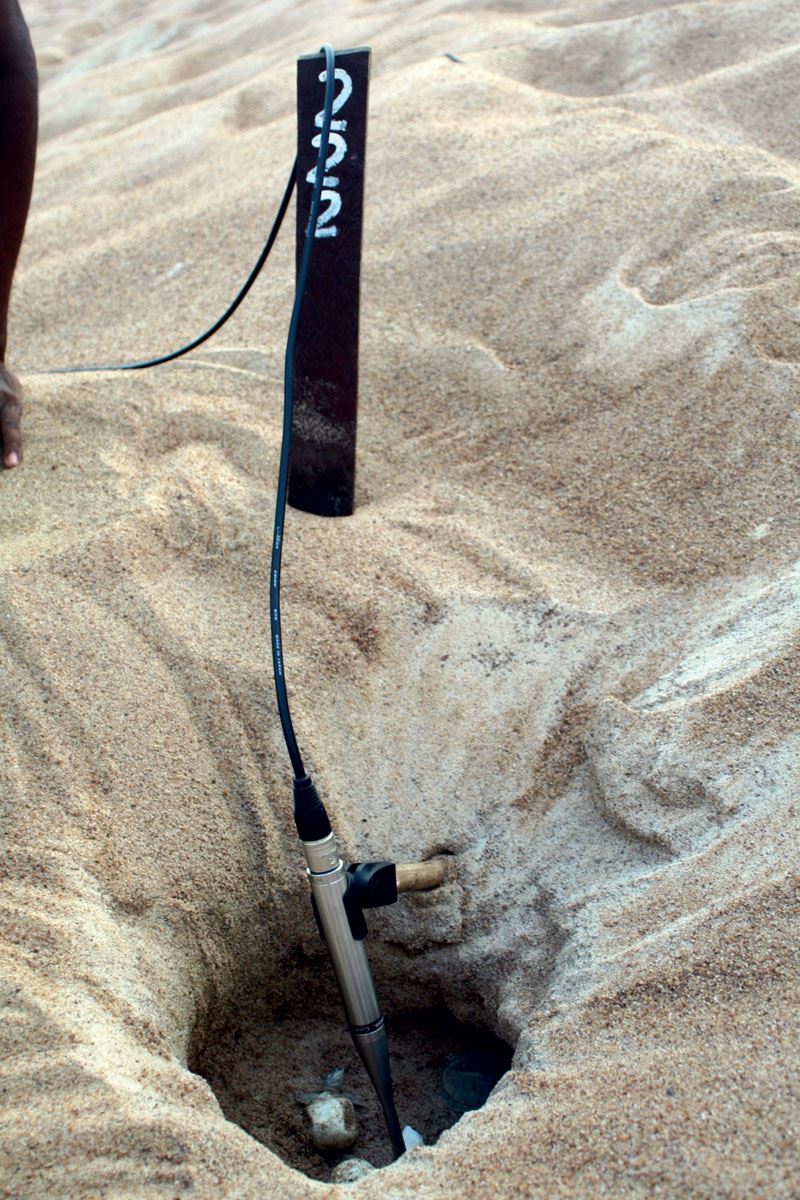 The main objective of the study is to improve how the species is monitored and managed. The area under surveillance is a 2-kilometer stretch of beach along the Purus River in the Abufari Biological Reserve, the largest spawning region of the giant Amazon River turtle in the state of Amazonas. The researcher estimates that there are around 2,000 individuals in the area. The use of drones, according to Ferrara, is new in freshwater turtle studies. “I don’t know of any previous work on how to use drone cameras to photograph turtles. We did tests to understand how to operate the drone and how much it would influence their behavior,” she says. The devices, however, are already used to study sea turtles in countries including the USA, Australia, and Mexico.

A critical moment
The spawning and hatching period is when the turtles are most at risk. It usually occurs after the flood season ends, around the middle of the year, when beaches are formed on the riverbanks as the bed recedes. Giant Amazon River turtles first gather underwater, before leaving the river in an orderly line to dig their nests.

After laying the eggs, they return to the river and wait for them to hatch. The embryos also emit sounds, which Ferrara proposes helps synchronize the hatching process. After hatching, they move towards the river in a large group to increase their chances of survival, while at the same time alerting the mothers of their presence. This behavior was first described by Ferrara and fellow biologists Richard Carl Vogt, from INPA, and Renata Sousa-Lima, from the Federal University of Rio Grande do Norte (UFRN), in 2013 (see Pesquisa FAPESP issue no. 205).

“Turtle meat and eggs are commonly eaten in the Amazon,” says Ferrara, explaining that the females are easily caught when they are waiting by the beach where they dug their nests. On spawning nights, they are even more vulnerable. “The drone images will tell us when the eggs are being laid and when they are hatching, and whether any environmental conditions, such as storms, affect this,” says the researcher.

Biologist Paula Pinheiro, from the Chico Mendes Institute for Biodiversity Conservation (ICMBIO), has already worked on the preservation of turtles and says that the new technique has advantages that could be adopted in other locations in the future. One is the reduced need for human interference—turtles may modify their behavior in the presence of researchers on the beaches where they spawn. “Collecting data by drone can minimize this interference,” says Pinheiro. She also points out that the results of the study will give local communities and environmental agencies a better idea of when to concentrate their conservation efforts.

In the first phase of the research in 2019, the group realized that the turtles took longer than usual to hatch. Ferrara does not yet have a hypothesis about potential catalysts for the hatching process. She reports that a group of scientists from the USA and Costa Rica published an article this year in which they attempted to predict when eggs laid by the olive ridley sea turtle (Lepidochelys olivacea) would hatch based on environmental variables, without associating them with sounds and images. The study involved 10 years of observation. By supplementing the data with images captured by drones and sound recordings, the hope is to shorten this time span.