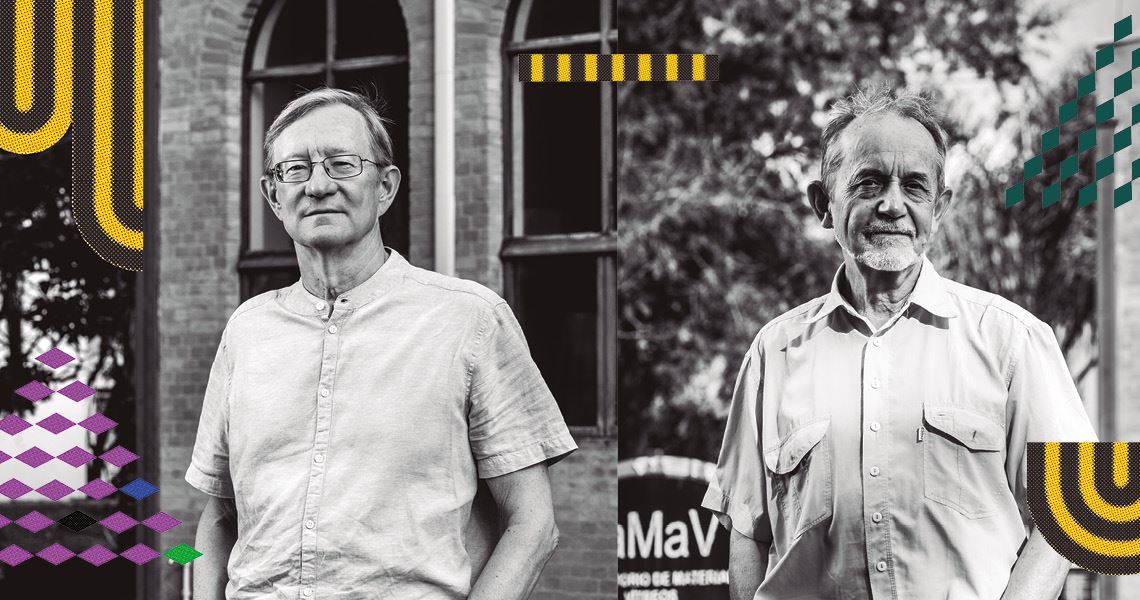 The life and career of Ukrainian physicist Alexander Abyzov was changed forever when Russia invaded his country on February 24. At the time, he was working at the National Science Center Kharkiv Institute of Physics and Technology (KIPT), Ukraine’s oldest and largest physics research institution, but like many Ukrainians, he had to leave everything behind to flee the war.

Located about 40 kilometers from the Russian border, Kharkiv was one of the first cities to be attacked. According to the local government, the city was bombed 29 times on the first day of the Russian offensive. Several KIPT buildings were damaged or destroyed, including near its experimental nuclear reactor, leading to the closure of one of its campuses.

Abyzov arrived in Brazil in early August as a visiting researcher at the Vitreous Materials Laboratory (LaMaV) of the Federal University of São Carlos (UFSCar), which is headed by materials engineer Edgar Dutra Zanotto. The center of excellence in glass nucleation and crystallization has a reputation for attracting researchers from abroad (see Pesquisa FAPESP issue nº 178). The collaboration is part of the Researchers at Risk Initiative, launched by FAPESP in March to help teaching and research institutions in the state of São Paulo welcome scientists from conflict zones, such as Ukraine, Syria, and Haiti.

The journey from Kharkiv to São Carlos was not without its hurdles. Abyzov first attempted to escape Ukraine a few days after the Russian invasion began. “Normal rail services stopped working and it was practically impossible to get a seat on the evacuation trains,” says the scientist. His only choice was to try to leave the country by car with some friends. It took four days to travel from Kharkiv to the city of Ivano-Frankivsk, near Poland—a journey that normally takes about a day.

“My wife and I were able to cross the border at dawn on March 6, with the help of some volunteers,” says the Ukrainian physicist. “From there we traveled to Germany, and a few days later to Bergen, Norway, where we were granted refugee visas.” Even from a distance, Abyzov continued to work on his research. “I’m a theoretical physicist and my work involves analyzing experimental results,” he explains.

The opportunity to come to Brazil arose after he spoke to Zanotto, with whom he has collaborated for many years. “He told me about the FAPESP initiative, so we wrote a proposal and submitted it.” Within a matter of days, the proposal was approved. In São Carlos, Abyzov will run simulations on relaxation—spontaneous and partial rearrangement of molecules—during nucleation and crystal growth in supercooled glass-forming liquids.

He hopes his research will shed light on the complex crystallization process and contribute to the development of glass-ceramics, produced through the controlled crystallization of vitreous materials, which in the future could be used in orthopedic and dental prostheses, ballistic protection for automobiles and airplanes, and as a substitute for marble and granite. “I like working here,” says Abyzov. “In Norway, I’m just a refugee, but in Brazil I’m a researcher, and that makes a lot of difference in terms of self-esteem.”

He will conduct his study in partnership with Vladimir Mikhailovich Fokin of the Vavilov State Optical Institute in St Petersburg, a physicist from Russia with whom he has been collaborating for some years. “Officially, all Ukrainian scientists cut off professional ties with Russian colleagues, but personal contacts were maintained,” he says.

Fokin is also in Brazil. He arrived in the country in August to spend a year as a visiting professor at the Federal University of Bahia (UFBA) in Salvador. “When I heard that Abyzov was here, I came to São Carlos to work with him,” says Fokin, who will spend a month at LaMaV, with which he has maintained research links for more than two decades. “Russia and Ukraine are two major powers in glass research,” adds Zanotto, who since 2013 has been head of the Center for Research, Education, and Innovation in Vitreous Materials (CeRTEV), one of the Research, Innovation, and Dissemination Centers (RIDC) funded by FAPESP. “For anyone researching nucleation and crystallization in glasses and their physical and chemical properties, close contact with scientists from these countries is essential.”

Abyzov is expected to stay in Brazil for just three months. “I’m in the country as a tourist and I can’t stay any longer than that,” he explains. Norway only allows him to leave the country for six months. If this period were to be exceeded, he would lose his refugee status. “The only way for me to extend my stay in Brazil would be to get a humanitarian visa, which can take a long time. If I can’t do that, I’ll go back to Bergen and work with Zanotto and Fokin from afar.”

What remains even more uncertain is any potential return to Ukraine in the future. “Kharkiv is still being bombed and we don’t know what’s going to happen in the next two or three months, so it doesn’t make sense to plan any further ahead than that.”