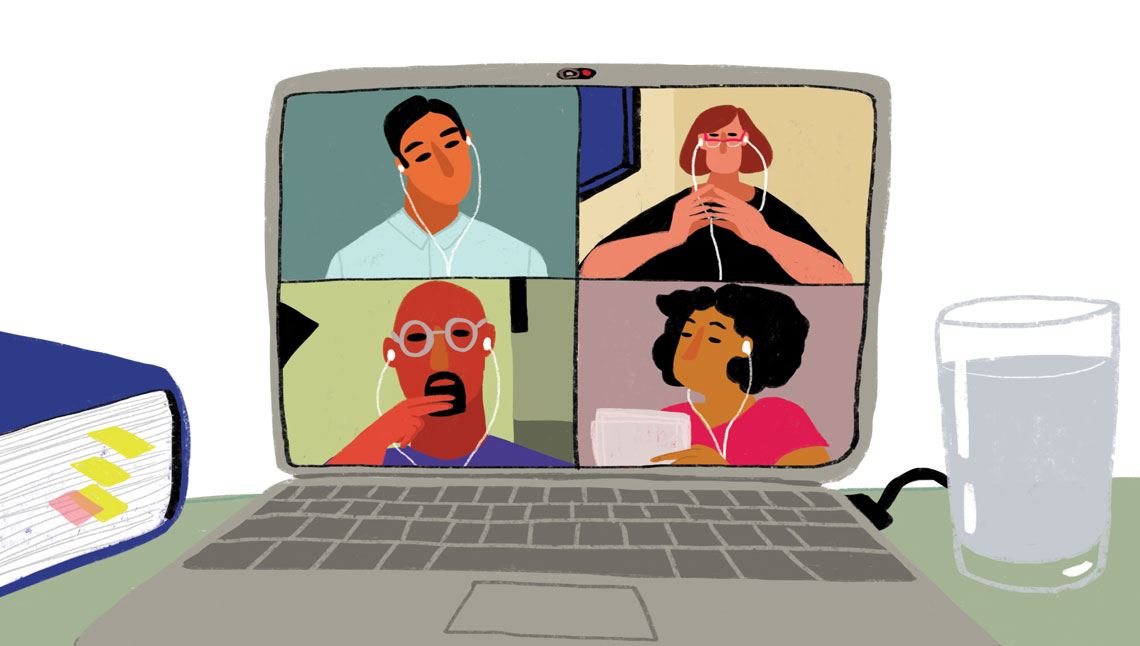 The use of communication technologies to defend dissertations and theses has become routine for graduate students and their advisors in recent months. In an effort to maintain previously established schedules amid the COVID-19 pandemic, students are turning to videoconference platforms more than ever, which in addition to video interaction, allow users to present slides and perform other tasks commonly involved in defending theses face-to-face. Some of the most used platforms are Zoom, Microsoft Teams, Google Meet, and Web Conference.

Even before the current social-distancing measures were put into place, these technologies were increasingly being adopted by Brazilian institutions. Videoconferencing tools have long been used by professors on thesis committees who are unable to attend in person, something often covered by university regulations. “As well as scheduling issues, it can be difficult to cover travel and accommodation expenses for researchers from more distant regions,” explains Francisco Kennedy Silva dos Santos, head of the Graduate Geography Program at the Federal University of Pernambuco (UFPE).

Internal regulations usually limit the number of committee members who can participate remotely to one member for master’s defenses and two for PhD defenses. However, with teaching and research activities suspended by universities across the country during the pandemic, remote participation has become the norm for everyone involved. “Although remote thesis defenses are new to many academics, almost everyone is already familiar with the technologies, which has facilitated the creation of fully virtual committees,” says Santos.

Despite initially causing some apprehension among researchers, remote defenses have been well received by the scientific community. “Since we still don’t know when face-to-face activities will resume, this is a good way to maintain the workflow of projects that are already at an advanced stage,” explains Fabiana Jardim, from the School of Education (FE) at the University of São Paulo (USP), who recently participated in the remote defense of a master’s thesis by a student she has been supervising. The researcher has been using the internet to keep up with all 10 of the graduate students she is supervising, and welcomes the use of video software, as well as voice and text messages. “My students are at various stages in their research and this form of communication helps me organize the information I need to share with each of them,” says Jardim.

• Find a private space for the videoconference
• Choose somewhere quiet and well-lit
• Put your cell phone on silent mode and disconnect other devices from the local network
• Have water, paper, and a pen in hand, as well as any data and notes that may be useful
• Rehearse the session in advance to familiarize yourself with software and its features
• Check with your institution on what to do in the event of a disconnection or a system crash

After finishing her PhD thesis in March this year, Perla Cristina Carmo, a researcher on the Social Work Postgraduate Program at the Pontifical Catholic University of São Paulo (PUC-SP), was informed that she would have to defend it remotely. “At first I was worried about how it would all be organized. But I felt reassured after reading the guidance email from the institution,” says Carmo.

The procedure for scheduling a defense, which was already done using an online form on the university’s website, remains more or less the same. After the thesis has been uploaded—under normal conditions, a printed copy would have been submitted—committee members receive an email with instructions on how to access the platform used by the institution. The process of defending a thesis by video is much the same as in person, with the student and the examination committee meeting for a set amount of time to discuss and assess the paper. “In my case, it was four hours, which in the end felt more tiring because everything was done on a computer,” says Carmo.

Valéria Feitosa, a PhD student at USP’s School of Economics, Administration, Accounting, and Actuarial Science (FEA), recently went through the experience of taking her qualifying exam remotely. She met with the three committee members via videoconference, in an entirely virtual process that lasted about two hours. “I had the chance to test the software beforehand when giving a presentation to my research group, which made me feel calmer when it came to the qualifying exam,” she explains.

National platform
The Conferência Web platform, launched in 2018, has become one of the most widely used resources for remote thesis defense among Brazilian federal institutions. Developed by the Brazilian National Education and Research Network (RNP) in partnership with the Brazilian Federal Agency for Support and Evaluation of Graduate Education (CAPES) and the Audio and Video Laboratory (PRAV) at the Federal University of Rio Grande do Sul (UFRGS), the tool has been used for around 600 defenses since most of the country began implementing lockdown measures in mid-March. “What’s unique about this platform is that it was designed specifically for educational institutions, with features that reproduce aspects of face-to-face thesis defenses,” says Luiz Coelho, assistant director at RNP.

Each virtual session on the platform can have up to 75 participants, and the meeting moderators can set up a user hierarchy beforehand. As well as allowing slide shows and screen sharing, the software also lets users record from two cameras, providing multiple angles. To avoid the need for students to disconnect from the session, the committee deliberates in a separate virtual space, so that their discussion prior to disclosure of the result is completely private. Broadcasts can also be expanded to up to 2,000 viewers. “This guarantees the fundamental character of the defense process as open and transparent,” adds Coelho. At the end, authorized participants are given access to a recording of the entire public session.