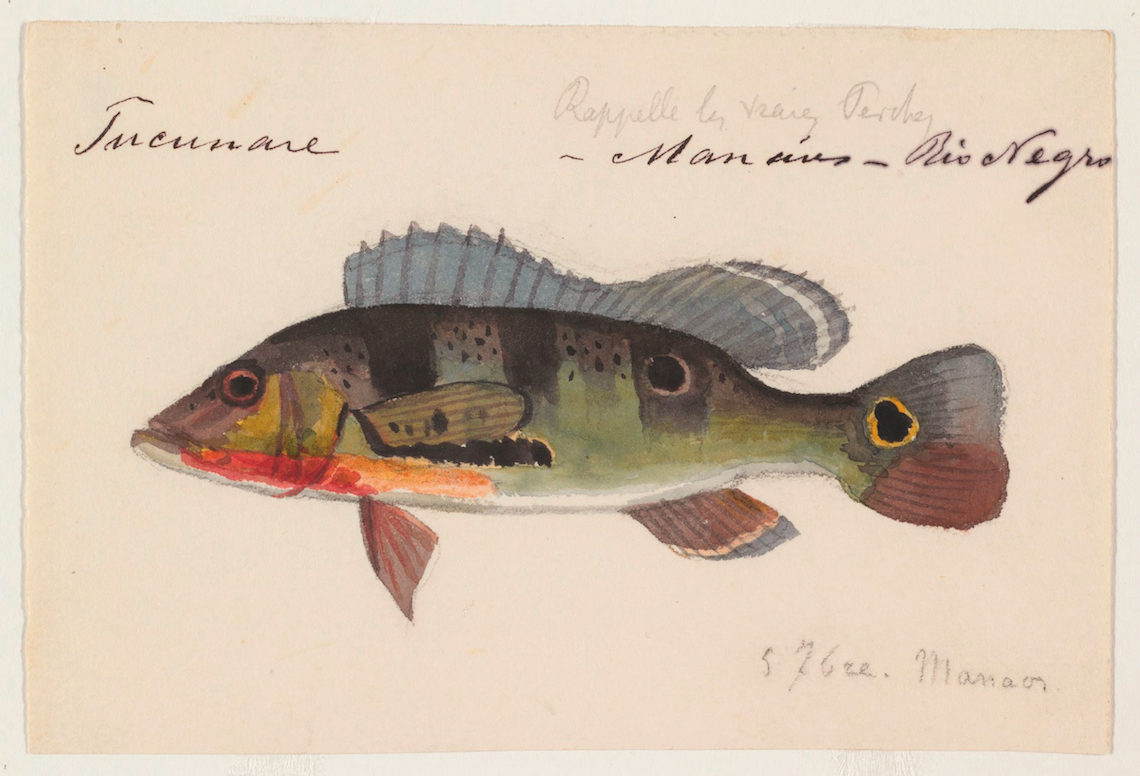 During late 1865 and early 1866, Swiss artist Jacques Burkhardt (1808–1867), already ill, stayed in a simple house on the banks of the Amazon River, in the Amazonian city of Tefé, just over 500 kilometers (km) from Manaus. Stopping in the capital of the state of Amazonas was one of the main stages of the Thayer expedition, privately sponsored in order for Swiss naturalist Louis Agassiz (1807–1873), a friend of Dom Pedro II (1825–1891), to achieve two goals through an unprecedented trip through a large portion of Brazil. The first―disproving Charles Darwin’s (1809–1882) theory of evolution, which was gaining traction at the time―was not achieved. The second goal, that of studying Brazilian fish, generated a gigantic amount of data. About 80,000 specimens of Brazilian fauna, mostly fish, were taken to the Harvard Museum of Comparative Zoology, founded by Agassiz in the United States. 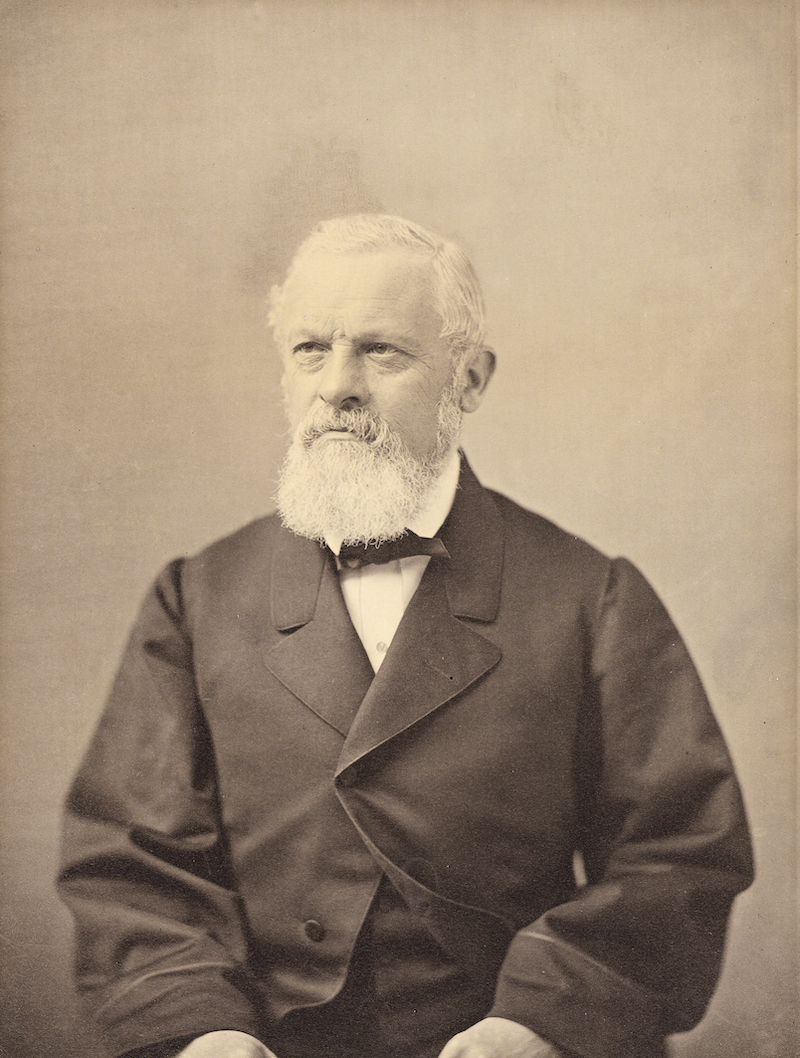 The Swiss illustrator produced 1,100 watercolors depicting Brazilian fish, but the whereabouts of about half of the drawings are unknownReproduced from Peixes do Brasil: Aquarela de Jacques Burkhardt 1865–1866

An incredible by-product of the Thayer expedition―a set of watercolors by Burkhardt depicting salt- and freshwater fish―can now be appreciated, for the first time, in the book Peixes do Brasil: Aquarela de Jacques Burkhardt 1865–1866 (Fish of Brazil: Watercolors by Jacques Brurkhardt 1865–1866). Published in 2019 by EDUSP, the volume was edited by two fish specialists from the Museum of Zoology at the University of São Paulo (MZ-USP), Heraldo Britski and José Lima Figueiredo. One-third of the 521 detailed drawings included in the book were produced in the Tefé house. “Agassiz claimed that the expedition yielded 1,100 drawings of fish. My hope is that publishing the book helps reveal the whereabouts of more of these watercolors,” notes Britski. “We don’t know if the other drawings have been lost completely or if someone still has them somewhere.”

The expedition left the United States on April 1, 1865 and landed in Rio de Janeiro 23 days later. Several teams were organized in order to simultaneously explore the areas to be studied. The main group, which was led by Agassiz and included the illustrator, explored various locations in the Paraíba River basin and collected saltwater fish in the bay at the mouth of the river. The team then headed to the North by ship. After traveling through Salvador, Maceió, Recife, Fortaleza, and São Luís, they arrived in Belém and sailed up the Amazon River to Tabatinga, in the state of Amazonas. On the way back, down the great river, the expeditionaries stayed longer in Tefé; from there, they went on to Manaus to make short excursions into the Rio Negro region. They then visited Belém once again, made a stop in Fortaleza for one last expedition into rural Ceará, and returned to Rio de Janeiro. At the end of March 1866, they departed for the United States.

According to the book editors, little is known about Burkhardt’s life before becoming friends with Agassiz and moving to the US state of Massachusetts, to become Agassiz’s personal artist. Agassiz’s records reveal that the artist worked very hard during the expedition in Brazil. “In Tefé, in a warehouse on Rua Direita, in downtown Rio—where all the material was stored—or on the deck of the Icamiaba, traveling through the Amazon,” described the naturalist. Once caught, the fish were quickly brought to him so he could create the watercolors, considered to be sketches to be improved later, in the United States. Some specimens were kept in an aquarium, to maintain their vibrant coloring. One of Agassiz’s letters, included in the book, describes Burkhardt’s great effort, drawing up to 20 fish a day―at a time when photography was still in its infancy and in black and white only. In Brazil, the artist produced more than 800 watercolors of fish; 2,000 images in total. In addition to other animals, he also drew landscapes―many of them depicting the banks of the Amazon.

The fact that not all illustrations have survived a period of more than 150 years is the result of the artist’s troubled life since the expedition returned to the United States. Burkhardt began working on the originals shortly after the trip but died before concluding his work. “Burkhardt, a dear friend for 20 years, passed away 10 months after our return from a disease that was not caused by Brazil’s tropical climate, as it had existed for several years prior, but undoubtedly worsened. My advice was useless in the face of his obstinate desire to come with us, even though such a trip could only be fatal to him,” writes the naturalist in a letter. Agassiz asked other ichthyologists to study the material, but the watercolors were never published during his lifetime. He died in 1873. Part of the collection was taken to Vienna by Austrian zoologist Franz Steindachner (1834–1919). The Amazonian specimens were the subject of many studies during the late nineteenth century. However, according to the editors of the book, for some reason the watercolors were never used to illustrate these works.

The rich material that remained in the United States was left in the Museum of Comparative Zoology for more than 60 years. In 1940, the director of the institution sent the watercolors to a famous Stanford University ichthyologist, George Myers (1905–1985). The note included was succinct: “Perhaps you will find some use for them. If not, I suppose that even in California you may sometimes need fuel for your fireplace.” When he visited Rio de Janeiro to give lectures, between 1942 and 1944, during World War II, Myers brought some of the watercolors and showed them during his talks. According to a paper written by Myers, all the drawings were handed to the National Museum of Brazil, in Rio de Janeiro. But they never appeared again at the institution. The editors also claim that, in 1971, the watercolors that had remained in California also vanished. Myers died in 1985, before the drawings could be found again.

They mysteriously reappeared a few years later at the Museum of Comparative Zoology. Thanks to their good condition, the sheets were digitized and can now be viewed online. The watercolors depicting more than 500 Brazilian fish can now also be seen in the work published by EDUSP. “Burkhardt drew some Amazonian fish, such as the angelfish, which are very much coveted by aquarists today,” adds Britski. Over the past few years, several books, such as those by Ana Maria Belluzzo and Paulo Vanzolini (1924–2013), have been illustrated by some of Burkhardt’s drawings―especially in Brazil. But none of them brought together so many of the Swiss illustrator’s drawings.