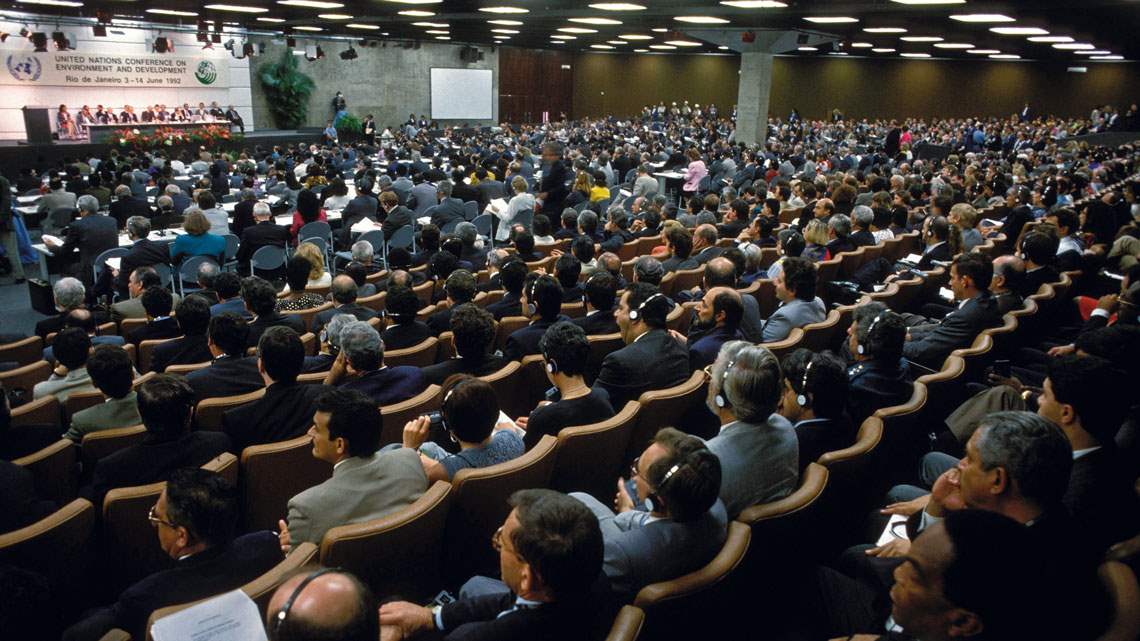 One of the sessions on the first day of the United Nations conference in Rio, in 1992

On March 23, 1992, José Goldemberg, a professor of physics at the University of São Paulo (USP) and then minister of education, was appointed as interim environmental secretary in place of engineer and environmentalist José Lutzenberger (1926–2002). One of his immediate tasks was convincing heads of State from other countries to attend the United Nations Conference on Environment and Development, also known as the Earth Summit or the Rio Summit, which was due to be held a few months later in June to address issues such as global warming, Amazon forest fires, climate change, and loss of biodiversity. News articles published by the roughly 7,000 journalists covering the event introduced the public to the then-novel concept of sustainable development, defined as the need to reconcile environmental protection with social and economic progress.

Just weeks after he was installed as environmental secretary, Goldemberg was in Beijing, China, in a meeting with the Chinese prime minister, Li Peng (1928–2019), alongside Brazilian ambassador Marcos Azambuja. “He was an engineer by profession and wanted to know whether the measures against global warming would hurt China’s economic progress. I answered: ‘Not if you develop state-of-the-art technology,’” Goldemberg said in early March, recalling his discussion nearly 30 years prior. The then-secretary’s agenda included similar meetings in Washington, New Delhi, and Tokyo. “The heads of state I spoke to were hesitant to attend the conference in Rio.”

But as far as attendance is concerned, the Earth Summit, held from June 3 to 14 at Riocentro, a convention center in Rio de Janeiro, was a success: it attracted approximately 180 heads of State, including US president George H. W. Bush (1924–2018), French president François Mitterrand (1916–1996), British prime minister John Major, and Cuban president Fidel Castro (1926–2016). “The Rio Summit was the first major conference in the 1990s about global issues and the largest international event ever hosted in Brazil,” says then foreign minister Celso Lafer, who previously served as chairman of FAPESP (2007–2015) before being succeeded by Goldemberg (2015–2018). “This was the heyday of Brazilian diplomacy and optimism about Brazil’s potential.”

The Earth Summit built on the international debate about environment issues that began in 1968 with the Club of Rome, a group of business, banking, political, and academic leaders who shared a concern over the depletion of natural resources, such as oil. These concerns reached a wider audience when they published a report on “The Limits to Growth” in 1972.

“Around that same time, the United Nations (UN) Conference on the Human Environment, also known as the Stockholm Conference, in Sweden, became the first to bring together heads of State to discuss environmental issues. “The Stockholm Conference was the first to raise global awareness about nature’s fragile ecosystems,” says Lafer. “But it faced significant diplomatic difficulties stemming from North-South polarization—between rich and poor nations—and East-West tensions amid the Cold War [a political and ideological conflict between the United States and the Soviet Union], which shaped the geopolitical landscape at the time.” 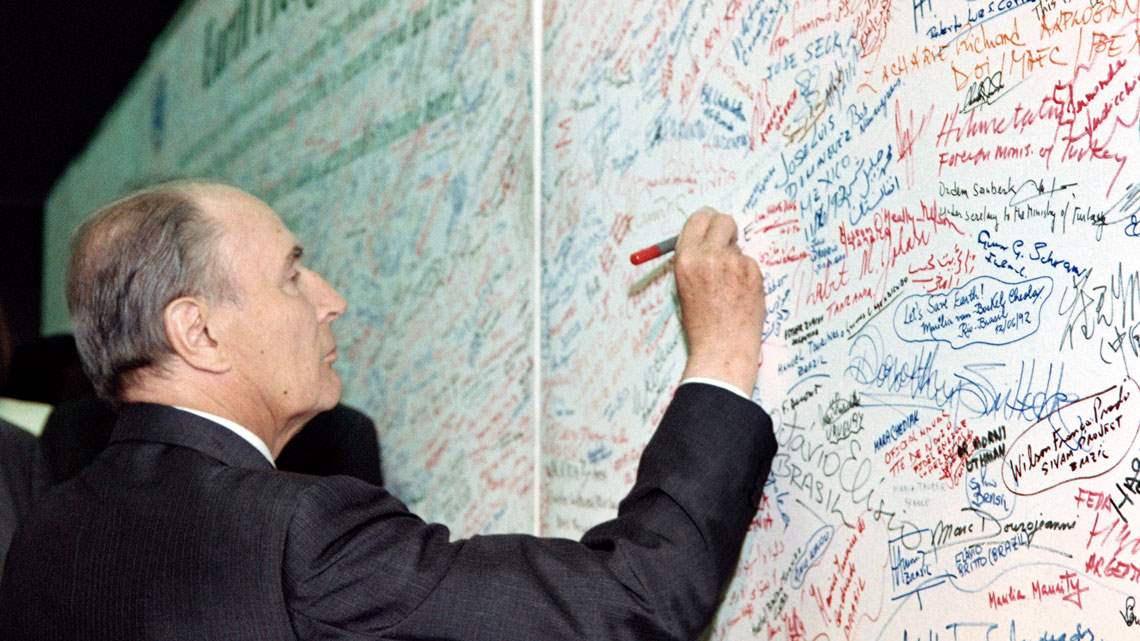 In 1987, the UN published a report titled “Our Common Future,” also referred to as the Brundtland Report after Gro Harlem Brundtland, then prime minister of Norway. The report advanced the concept of sustainable development that had been conceived at the Stockholm Conference. In December 1988, José Sarney (1985–1990), then president of Brazil, presented the country’s candidacy to host an international UN conference to discuss the issues presented in the report.

“Sarney’s motivations revolved largely around the Amazon,” writes former Brazilian ambassador Rubens Ricupero, who then headed the Brazilian embassy in Washington, in a yet-to-be-published article. Amazon deforestation, he recalls, had been exacerbated in the late 1980s.

A professor holding the José Bonifácio chair at the USP Institute of Foreign Relations since January 2022, Ricupero mentions another factor that contributed to Brazil’s selection to host the conference. “On December 22, 1988, the murder of Chico Mendes [1944–1988] in Xapuri, Acre, northern Brazil, led to an international outcry over the perceived passivity, complicity or ineffectiveness of Brazilian policymakers in stopping the wave of destruction.”

But there were two clear signs that Brazil had a newfound interest in environmental preservation. The first was its new Constitution, promulgated in October 1988, which incorporated by reference the country’s National Environmental Policy, approved in 1981 as a result of advocacy by biologist Paulo Nogueira Neto (1922–2019), the first director of the Special Department for the Environment (1973–1985), an agency later superseded by the Ministry of the Environment. The second was the creation of the Brazilian Institute of the Environment and Renewable Natural Resources (IBAMA) in 1989, with a mandate to execute Brazil’s environmental policies.

Lafer, who was tasked with organizing the conference, recalls how the Federal Government, under President Fernando Collor, the state of Rio under Governor Leonel Brizola (1922–2004), and the city of Rio under Mayor Marcelo Alencar (1925–2014) worked together in coordination to deliver the conference. “Everyone understood the significance of the event.”

“There was a tense moment when the Chinese delegation warned that they would not attend if Tibetan monk Tenzin Gyatso, the Dalai Lama, whom they regarded as an enemy of the State, was present. On being consulted by Lafer, the Brazilian president reportedly said that under no circumstances could China be left out of the conference. But nor could the Dalai Lama. 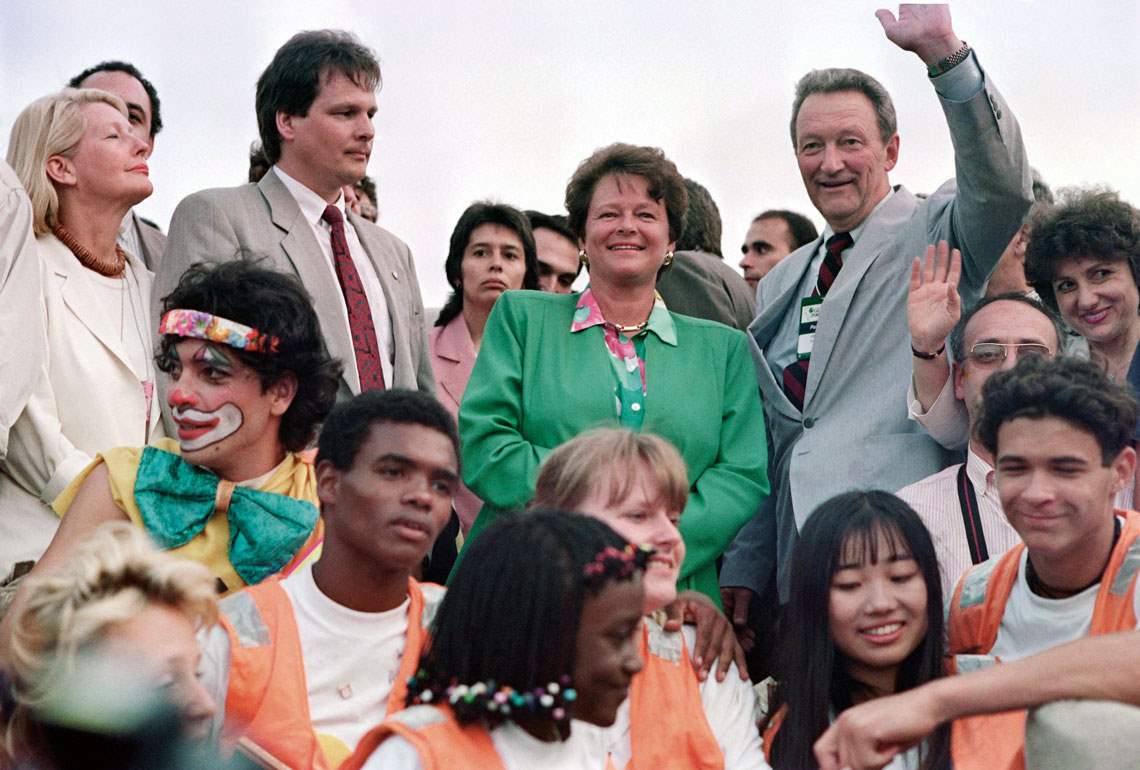 The Ministry of Foreign Affairs resolved the impasse by granting the religious leader an unlimited visa on the implicit condition that those organizing his visit strictly follow an agreed schedule, which began with the Global Forum, a side event held at Aterro do Flamengo. The Chinese delegation would wait for the Dalai Lama to leave before coming to Brazil. There was a risk, however, that the Dalai Lama could extend his stay in Porto Alegre. When he was alerted to the risk, Lafer intervened to make sure he would leave Brazil on time. Before the Chinese arrived, the monk had left for Buenos Aires. “In a conference seeking to build intergovernmental consensus, we couldn’t let a diplomatic slip put it in jeopardy,” he says.

In his opening address during the conference, Lafer described the summit as “a unique opportunity to change the prevailing patterns of interaction in global society.” The international landscape was then ripe for joint action. Azambuja, former secretary-general of the Ministry of Foreign Affairs, who led the working groups during the conference, notes that “global events in that period had created an environment where countries were more willing to cooperate.” The fall of the Berlin Wall in November 1989 and the dissolution of the Soviet Union in December 1991 had ended the tensions of the Cold War. “The world now recognized how fragile nature was and was trying to find common ground to address environmental issues,” says the ambassador. Brazil, for its part, “was abandoning the idea that the environment was no longer a matter of us against them; it was becoming a cause of our own.”

Ricupero notes that Brazil played an important role in the talks surrounding the three major international agreements that were signed during the conference.

The first was the United Nations Framework Convention on Climate Change, signed at the opening of the conference. This agreement outlined strategies to combat global warming and was the precursor of the Kyoto Protocol in 1997, in which 154 nations pledged to reduce their pollutant emissions. “But in those countries that refused to sign the Kyoto Protocol, greenhouse gas emissions continued their ascent,” says Goldemberg. “Brazil did agree to set reduction targets but failed to meet them. It also failed to eliminate deforestation.” This impasse would only be resolved in 2015 with the Paris Agreement, whose 195 signatories all established voluntary emissions reduction targets. 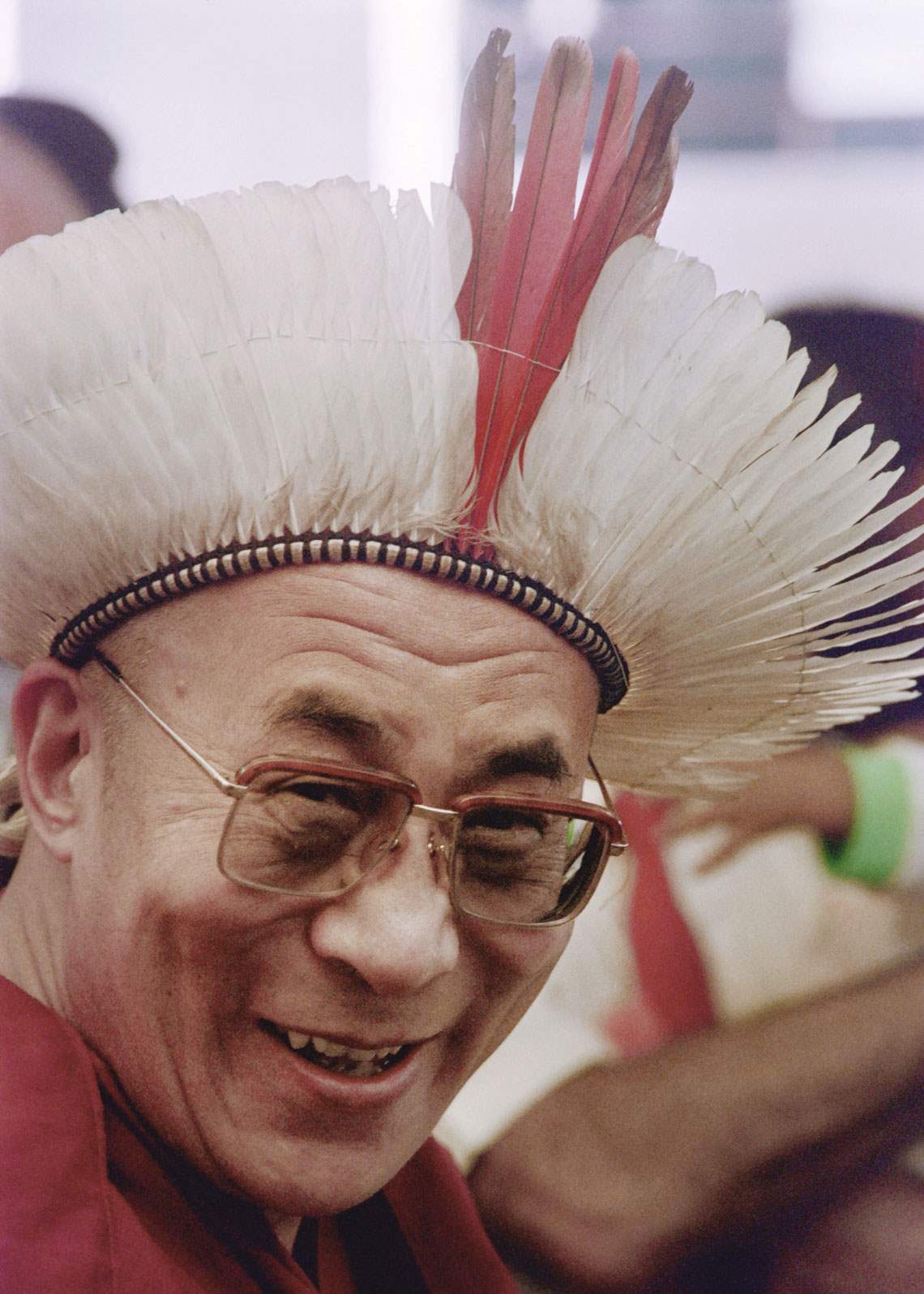 The second international agreement was the Convention on Biological Diversity, also signed at the opening of the conference, which set targets on preserving biodiversity (see Pesquisa FAPESP issue nº 198). The US signed the convention on climate but not the one on biodiversity. “Their refusal to this day is essentially motivated by the US’s expansive concept of intellectual property and their rejection of any restriction on the scope of pharmaceutical or other patents, including any requirement to pay royalties to communities possessing traditional knowledge about medicinal herbs,” notes Ricupero. As Brazil’s ambassador in Geneva, Switzerland, in the late 1980s he helped to draft the two agreements. “The approaching Rio Summit put a hasty end to the negotiations on the conventions, which had been under discussion for several years,” Ricupero told Pesquisa FAPESP.

The third agreement resulting from the summit was the Agenda 21, a set of recommendations to achieve sustainability and preserve natural resources in the twenty-first century. After being appointed to chair the funding committee soon after the conference opened, Ricupero recalls how his chapter of the Agenda 21 had not so much as its title written, while the others already had complete drafts that would be firmed up in the coming days. After an unproductive meeting open to all interested parties, he held a second, closed meeting with regional leaders only, convened at 11 a.m. on the 10th, the final day of the conference, to prepare a draft of the funding chapter. When he finally completed the draft at 4 a.m. the following day, he noticed that his elbows, after 16 hours of friction on his desk, were raw and bleeding. “Except Nordic countries, no other nation was willing to commit to funding environmental programs,” he recalls. As he wrote in an article published in April 1993 in the magazine Lua Nova, financial pledges came to less than half of the US$10 billion they expected.

“The Agenda 21 was meant to be a powerful planning tool for cities, states and countries,” says Arlindo Philippi Jr., an engineer at the USP School of Public Health, who coauthored the book, Curso de gestão ambiental (A course on environmental management; Manole, 2004). “Wealthy nations implemented virtually everything they committed to do, while peripheral nations such as Brazil made little progress.”

“The Earth Summit made it clearer than ever that the loss of forests and polluted rivers are everyone’s loss,” says Azambuja

Philippi Jr. and biologist Maria Claudia Mibielli Kohler assessed the outcomes in São Paulo, Rio de Janeiro, Santos, and Florianópolis from implementation of the Agenda 21, which began in 1992 but was later interrupted as subsequent administrations took office. They described their findings in an article published in 2003 in the journal Cadernos de Pós-Graduação em Arquitetura e Urbanismo. “Had São Paulo adopted the Agenda 21 in city planning, perhaps many of its present-day environmental issues, such as recurrent flooding, would have been minimized or even resolved,” he says.

He notes, however, that the Rio Summit did accelerate the creation of the state and municipal environmental agencies forming the National Environment System (SISNAMA), as a platform for implementing related government programs: “The 1992 conference did advance solutions to many problems, although not to the extent expected, especially in waste management, due to a lack of commitment from government leaders across the three spheres of government.” Goldemberg notes: “No government official can now say they are against sustainable development.”

The 1992 summit, which was revisited in the Rio+20 conference, also hosted in Rio in June 2012 (see Pesquisa FAPESP issue nº 193), was the first UN conference that was open to participation by society. Another 1,400 organizations and 10,000 people, approximately, discussed key environmental issues during the Global Forum, a side conference. “This event sent a clear signal that the environment is no longer a matter for governments only; it opened the doors for society to participate directly in policymaking,” says Azambuja. “The Earth Summit made it clearer than ever that the loss of forests and polluted rivers are everyone’s loss.”