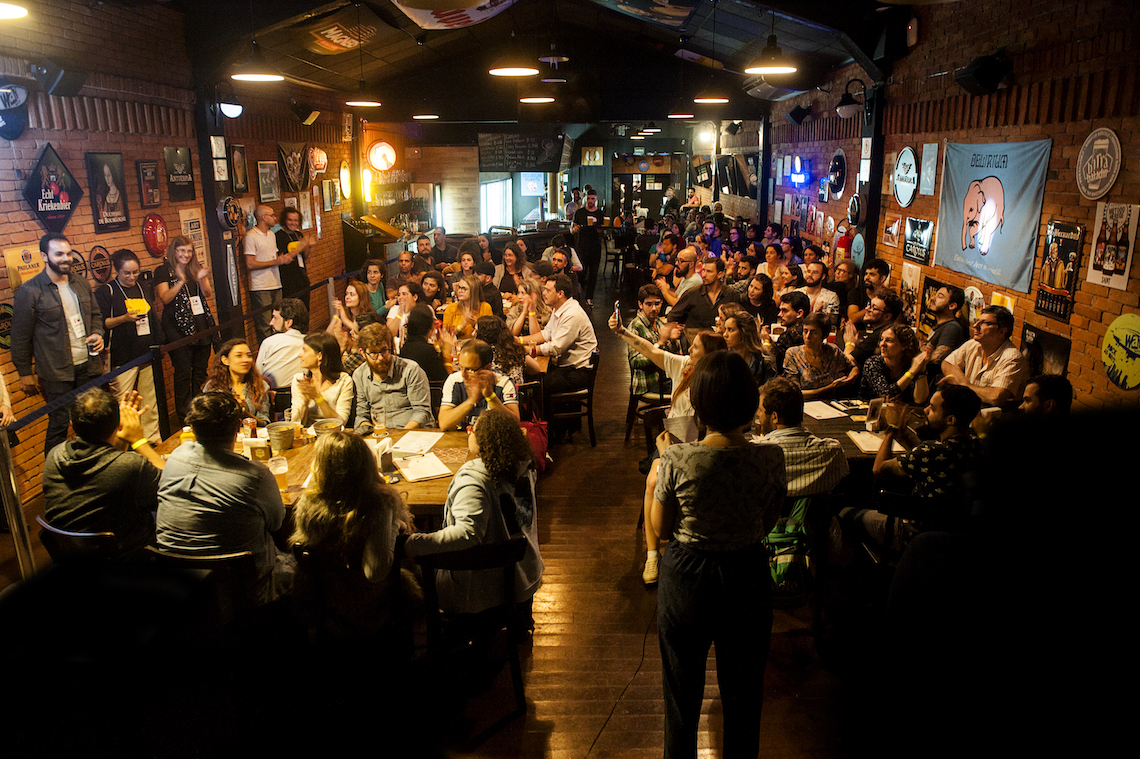 In the penultimate week of May, bars in 85 Brazilian cities put on a series of events that many customers have never seen before: instead of live music, the venues played host to scientists from a range of fields who presented their research and answered questions from the public between sips of beer. The Pint of Science festival was created in the United Kingdom in 2013 and this year was held simultaneously in 24 countries, including Spain, Thailand, Canada, the USA, and Costa Rica—but in no other country has the event spread so widely as it has in Brazil. Urban violence, videogames, archaeology, indigenous languages, and communication were just some of the many themes covered at the festival. Many of the attendees were ordinary members of the public. “Bringing scientific information to people unfamiliar with science is one of our main objectives,” says biologist Natalia Pasternak Taschner, the festival’s coordinator for Brazil.

At 7:00 p.m. on February 22, a rainy Wednesday evening in São Paulo, dozens of people arrived at the Tubaína bar in the Bela Vista neighborhood to listen to lectures on exoplanets and the creation of the universe. The place was packed, and the crowd spilled outside onto the sidewalk. Rogério Rosenfeld, vice president of the Brazilian Physics Society and a professor at São Paulo State University (UNESP), and Adriana Valio, coordinator of graduate studies in geospatial sciences and applications at Mackenzie Presbyterian University, spoke about the expansion of the universe and planets in other galaxies. Even the staff stopped to listen. “I wanted to know more about dwarf stars and the universe, and I finally have a better understanding of the subject, which seems very complex,” says lawyer Paula Silva, 28.

Various topics were addressed at the Delirium Café in the Pinheiros neighborhood of São Paulo: on May 21 and 22, teams of researchers from numerous fields—from quantum physics to sports science, volcanology, and climate change—rotated from table to table answering all manner of questions. “It was great fun talking about science in a crowded bar,” said one of the participants, physicist Paulo Artaxo, from the Institute of Physics at the University of São Paulo (USP). 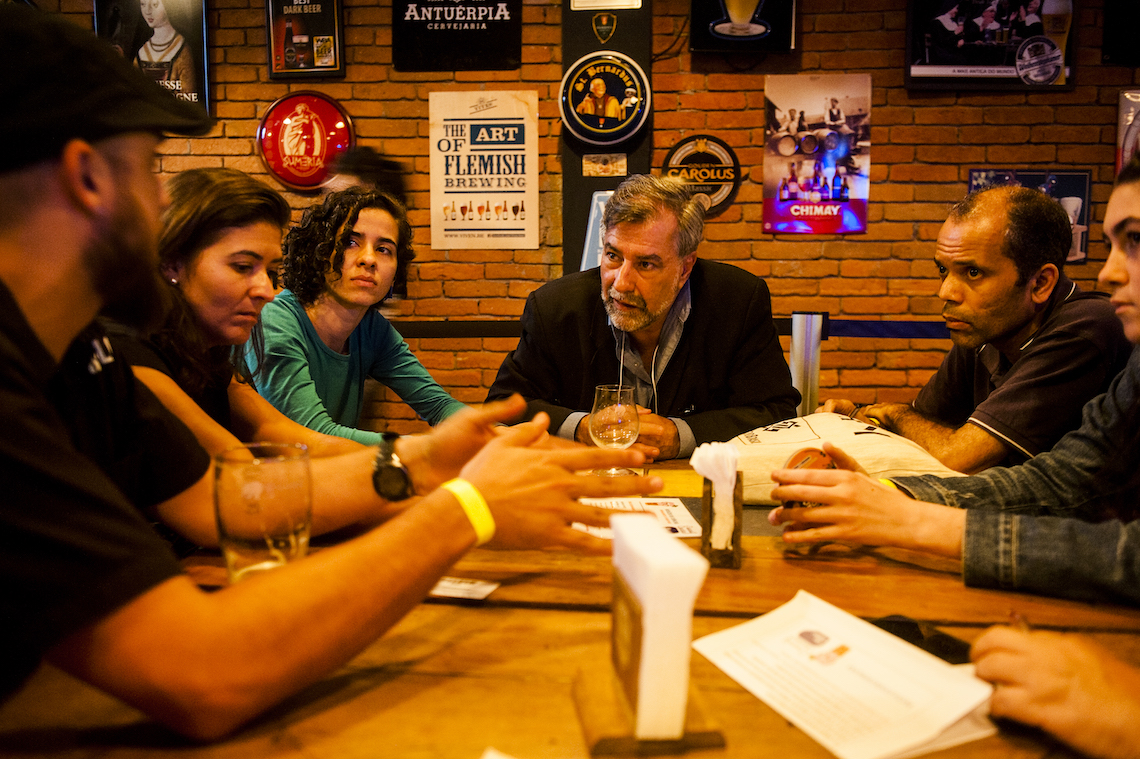 The festival was bigger than ever this year. In São Paulo, Pint of Science events were held on the east side of the city for the first time. Researchers from different fields gathered to talk about science at Warehouse 77, a bar located in the old neighborhood of Penha. They presented their research and discussed, among other topics, the government funding cuts to science, technology, and education in Brazil. On May 21, psychologist Elizabete Cruz, from USP’s School of Arts, Sciences, and Humanities (EACH), spoke about pregnancy and childbirth and how they relate to race and gender issues. Pharmacists Jeanine Vargas and Elizabeth Ferreira, both from the School of Pharmaceutical Sciences at USP, then gave a talk on the concept of neglected tropical diseases, focusing on Chagas disease and leishmaniasis, explaining their causes, symptoms, and treatments. To close the evening, biochemist Maurício Baptista, from USP’s Institute of Chemistry, presented some of the results of his research into the effects of sunlight on the skin. He also talked about the importance of using sunscreen.

On the same night, the Taverna Medieval bar and restaurant—a traditional Pint of Science venue in the Vila Mariana district of São Paulo—was filled to capacity with customers in horned helmets enjoying the medieval ambience and listening to a talk on how neuroscience supports research into wellbeing and healthier ways of living. The speakers were biopsychologist Elisa Kozasa (wearing a medieval cloak in the spirit of the event), a researcher from the Brain Institute at Hospital Israelita Albert Einstein, and agronomist Carlos Henrique Amaral de Souza. Only at the end of the lecture did the audience find out that Souza is also a Buddhist monk who goes by the name lama Rinchen Kyenrab. The evening began with a short performance by Companhia Delas of the play Mary e os monstros marinhos (“Mary and the sea monsters”), which tells the story of Mary Anning, an English paleontologist who discovered many fossils in the nineteenth century, something that was unheard of for a woman at the time.

At Tio Bola Cervejas Especiais, a bar in the city of Alegrete, there were presentations on nanotechnology, atmospheric modeling, and climate change. In the city of Belém, the activities were spread across four bars and addressed topics such as diet and the Amazon. At the Garage, Rock & Beer bar in Nilópolis, a town in the state of Rio de Janeiro, patrons learned about neuroscience with Thiago Matos Pinto, a computer science specialist from the Nilópolis campus of the Federal Institute of Rio de Janeiro. 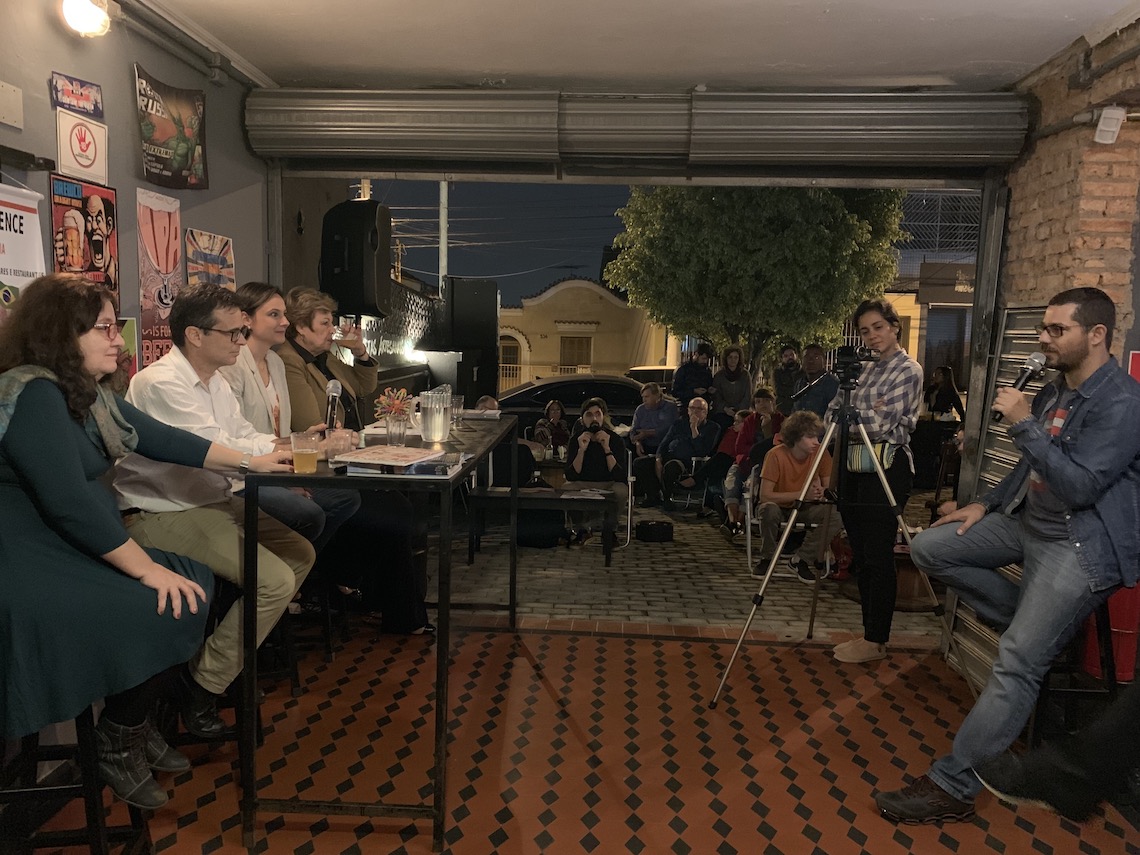 Pint of Science was created in London in May 2013 by two researchers from Imperial College: biologist Michael Motskin and neuroscientist Praveen Paul, both specialists in degenerative diseases. The idea was borne from an event they held a year earlier, when they invited people affected by Parkinson’s, Alzheimer’s, and multiple sclerosis into their labs to learn more about their research. “We have always wanted to better communicate to the public what our work is all about in a simple and accessible way, and our engagement with patients in 2012 showed us that it was possible,” says Praveen Paul. So the pair spoke to pubs in London about the idea of hosting scientists to talk about their research on Mondays, Tuesdays, and Wednesdays, when bars tend to be less busy. The pubs provide the necessary audiovisual equipment, but the cost is covered by the customer. “A lot of people turned up. We realized this could be a real success,” says Motskin.

With the help of their colleagues, Motskin and Paul created the Pint of Science website to promote the festival in the UK and to share the concept of bringing scientists and the public closer together in an informal environment. And it worked. Researchers from around the world heard about the event and decided to reproduce it in their own countries. “It is important to communicate scientific knowledge, to combat preconceptions, and to show that scientists are ordinary people like everyone else,” says Natalia Pasternak.

The first Brazilian version took place in 2015 at two bars in São Carlos, in the interior of São Paulo State, organized by journalist Denise Casatti of the Institute of Mathematical and Computer Sciences (ICMC) at USP. She requested permission from the British founders, then spoke to bars and arranged the schedule. The following year, Natalia Pasternak took over. In 2016, Pint of Science was held in seven cities, including São Paulo, São Carlos, Campinas, and Belo Horizonte. “It was mostly friends working together, making a concerted effort to promote the festival in the country,” recalls the biologist. “The biggest challenge was to convince commercial establishments to participate, because nobody knew anything about the event and they didn’t understand why we wanted to talk about science in a bar or restaurant in the middle of the week.” 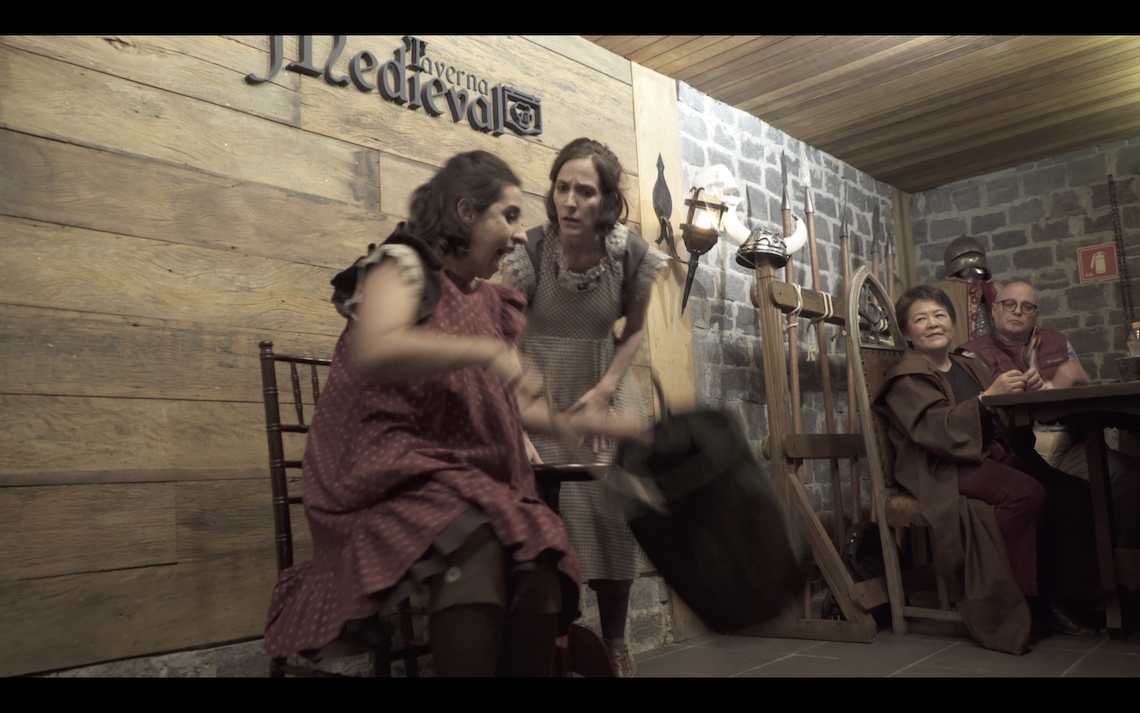 In 2017, it spread to 22 Brazilian cities, and last year, it took place in 56 different municipalities. In three years, the festival has grown so rapidly that it now has eight regional coordinators and a national team of 10 researchers who cater to an audience of hundreds, with waiting lists of researchers eager to take part. Some 2,000 volunteers helped run the festival this year, including scientists, journalists, and media analysts. Everyone who spends their time organizing venues and giving lectures does so on a voluntary basis. Topics suggested for presentation are analyzed months in advance by the coordinators. Great care is taken to strike a balance between complex scientific issues and subjects about which the public already has some knowledge.

The researchers are generally happy with this balance. “We have learned to communicate in an accessible way that everyone can understand, rather than using the scientific terms that we are used to,” says Patricia Brum, from the Biodynamics Department at USP’s School of Physical Education and Sport. She explained what she does at her lab and the impact of physical exercise on the body during an informal chat at Finnegan’s Pub in São Paulo in 2017. Brim says that she spent months preparing her presentation, with some help from her daughter Ana Luiza, then 13 years old. The teenager had the idea of using a double-decker bus as an example, with a driver sitting down and a ticket collector going up and down the stairs all day, to show the difference in their daily physical activity levels. “She likes science and reads a lot,” says the researcher. “It’s great to be able to engage new generations in the pursuit of knowledge.”

Sparking curiosity and inviting questions is one of the Pint of Science festival’s key objectives. Biochemist Walter Colli, from the Institute of Chemistry at USP, gave a talk on biotechnology and food safety at the event in 2016. “People often misunderstand the meaning of words, which leads to misconceptions,” he says. “This is the case with the term ‘transgenics,’ for example. Few people really know what it is, and most people are afraid because they believe it is something harmful, which is far from the truth.” 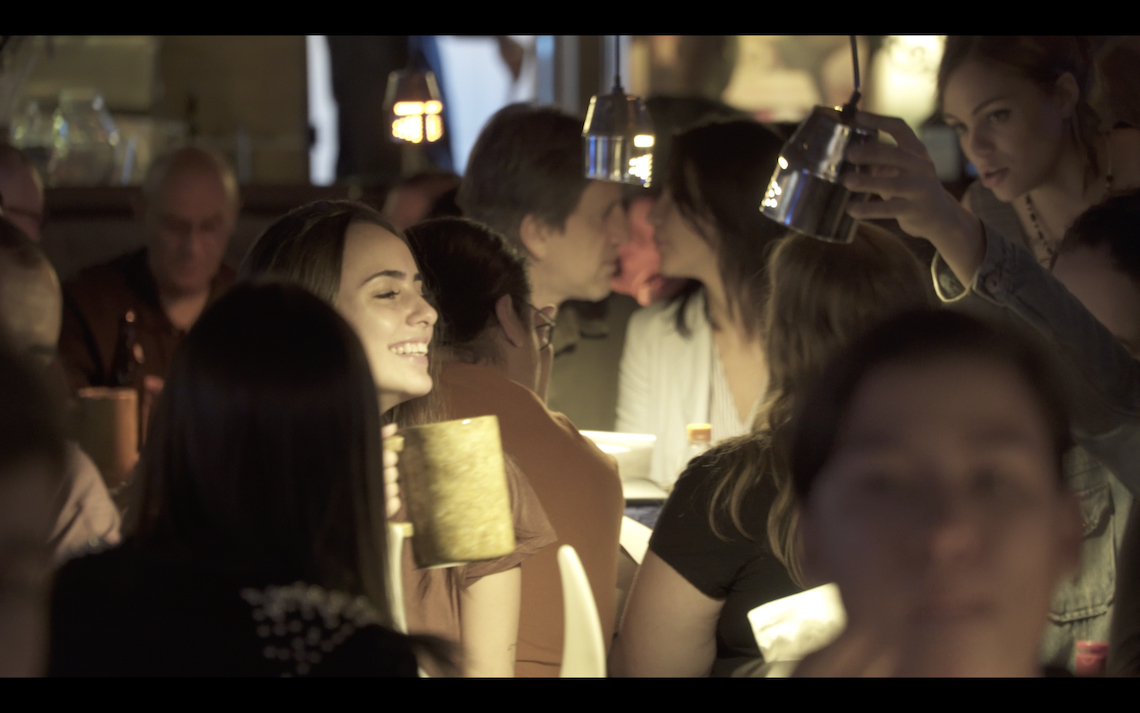 Scenes from the festival in Brazil: 2,000 volunteers choose the bars and organize the scheduleLéo Ramos Chaves

For the organizers and researchers involved in the event, the growing number of attendees and the diversity of the topics covered has helped increase scientific dissemination. “The greater the number and quality of channels used to transmit knowledge, the better,” says Alicia Kowaltowski, from the Institute of Chemistry at USP. In 2016, she talked about the mechanisms of human metabolism at the Tartar & Co restaurant in São Paulo, and the following year she once again participated in the festival, this time at Pizzaria Dona Firmina in the neighborhood of Moema. She says she enjoys the experience and hopes to continue taking part in the future. “I really like having the opportunity to talk to the public, exchanging friendly ideas about how our bodies behave,” she says.

Many of the people attending the events end up actively engaging in the discussion, generating new interactions with the researchers. A monthly 20-minute discussion on physics has been taking place at Tubaína bar in São Paulo since last year, organized by the International Center for Theoretical Physics/South American Institute for Fundamental Research (ICTP/SAIFR), which also hosts regular science events at the Moreira Salles Institute. “Observing how much interest people have and seeing how the festival opens doors to knowledge is very rewarding,” says Natalia Pasternak.