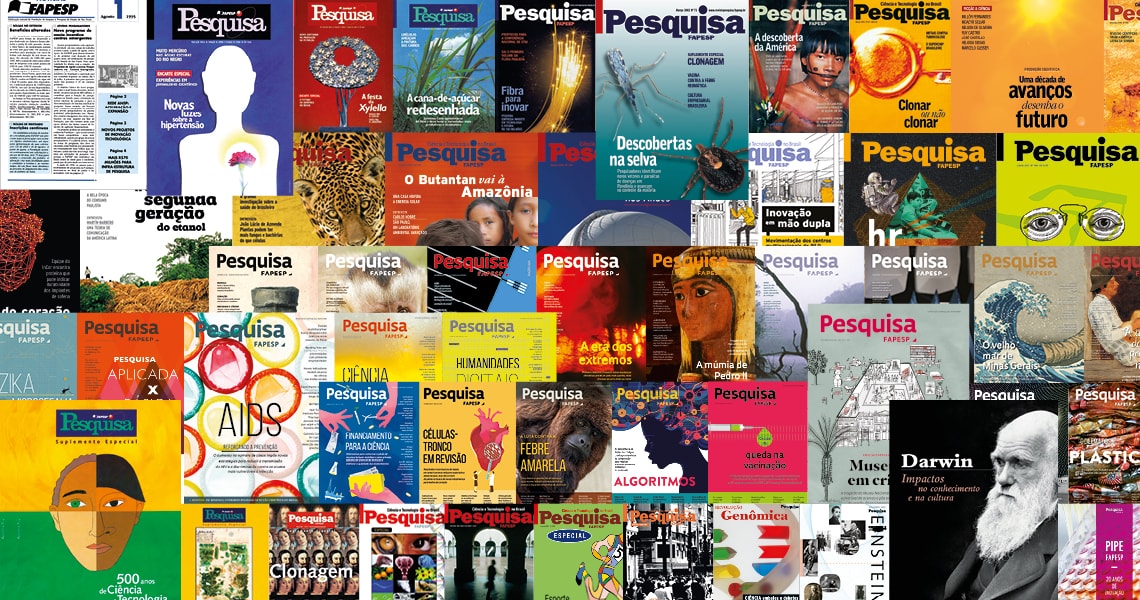 In the months leading up to the new millennium, genome research was a hot topic in academia and at research centers across Brazil and worldwide. This was the background of the launch of the first edition of Pesquisa FAPESP in October 1999.

The cover highlighted the advances of a research project funded by the foundation that aimed to define the genetic components of arterial hypertension, which affects millions of Brazilians. At 48 pages long, readers were given an insight into the latest developments in human genome sequencing, industrial process control software, and FAPESP’s Partnership for Technological Innovation (PITE) and Technological Innovation in Small Businesses (PIPE) programs, which had already benefited 300 companies.

“The journal evolved from FAPESP’s natural communication process. It played—and still plays—a key role in consolidating FAPESP programs and sharing their results,” says José Fernando Perez, who was scientific director at the foundation between 1993 and 2005 and helped get the publication off the ground. “It has always been a high-quality outlet for science communication and serves as a reference for science journalism in Brazil.”

Carlos Henrique de Brito Cruz, former FAPESP president (1996–2002) and scientific director since 2005, says the journal was a major step toward making the research conducted in São Paulo and Brazil better known to the public. “It has been very effective at achieving that goal. Articles in Pesquisa FAPESP have prompted editorials in major newspapers, and even more interestingly, they have been used as a basis for university entrance exam questions, showing that high schools are paying attention,” he says. “I don’t know of any similar initiatives by foreign research funding agencies. In Brazil, the Pesquisa FAPESP journal is highly respected and has encouraged—much to our satisfaction—similar initiatives at other agencies.”

Curious readers looking for the journal’s October 1999 issue online will notice that it is issue number 47, not 1, as would be expected. The reason is that the journal originally started as the Notícias FAPESP newsletter, launched in August 1995, and the numbering continued from there, rather than starting again from one. The newsletter, with four pages and an initial print run of 1,000 copies, was created with the primary purpose of spreading information about the foundation’s actions.

“The journal was a natural development of the newsletter. After producing Notícias FAPESP for four years, we realized that there was an opportunity in the country for a bigger project, for a serious scientific journal with links to an institution,” recalls journalist Mariluce Moura, who was responsible for the creation of Pesquisa FAPESP and was editor in chief until December 2014.

Moura says that her main reference when creating the publication was the British science journal New Scientist. “I was a big fan. I also liked Scientific American and French journal La Recherche, which inspired Pesquisa FAPESP‘s name.” The journal’s graphics were designed by graphic artist Hélio de Almeida, a designer with vast experience in journalism and publishing, who has also designed the covers of hundreds of books on the Brazilian publishing market. Almeida was art director at the publication for almost seven years, until August 2006.

The graphic and editorial excellence of the journal, according to Celso Lafer, FAPESP president between 2007 and 2015, has always been one of its defining factors. “Pesquisa FAPESP is a respected authority on everything important in Brazilian science. Right from the start, it was open to all fields of knowledge. It is the only publication that can make all this information so accessible with such high quality,” he says.

Carlos Vogt, coordinator of the Advanced Journalism Studies Laboratory at the University of Campinas (LABJOR-UNICAMP), says that the history of scientific communication in Brazil can be divided into two fundamental periods: before and after Pesquisa FAPESP. “There are other important initiatives, such as the Ciência Hoje and Ciência e Cultura journals, but Pesquisa FAPESP, due to the conditions under which it was formed and its professionalism, has become a major milestone in the history of scientific communication in the country,” said Vogt, who was FAPESP president between 2002 and 2007.

Just like the Notícias FAPESP newsletter, the journal was initially distributed for free to a select audience, including leaders of research groups and deans of universities in the state of São Paulo, as well as state government officials. Later, FAPESP scholarship and grant recipients were added to the mailing list.

In March 2002, the journal was published in a new format that continues to this day—96 color pages organized into four sections (Science and Technology Policy, Science, Technology, and Humanities), as well as more specific subsections that have changed over the years—and went on sale at newsstands, in bookstores, and via subscriptions with the aim of reaching a wider audience. Sales have grown over time and today represent 18% of its total circulation of 28,000 copies.

Although the initial objective was to publicize the foundation’s activities and projects, the publication has expanded its area of journalistic coverage. In 2002, when it first went on sale at newsstands, the journal had already started covering research not related to FAPESP or institutions in São Paulo. Its scope now covers important research conducted anywhere in Brazil or by Brazilian scientists working abroad, as well as highlighting major international advances, such as the detection of gravitational waves by American observatories in 2015.

Two other striking milestones in the publication’s history occurred in 2004: the Pesquisa Brasil radio show aired for the first time, providing news and reports produced by the journal’s staff, and the first international editions were published, initially in English and Spanish, and later in French. Six international editions are published each year—three in English, two in Spanish, and one in French—consisting of a selection of articles from the monthly Brazilian editions, chosen based on the excellence of the research described, the quality of the text, its repercussion among readers, and its interest to the foreign target audience.

It was also in 2004 that the content printed in the journal was first made available to textbook publishers, including Saraiva, Moderna, and Poliedro Sistema de Ensino. For the first three years, the texts were provided at no cost, but a fee was introduced in 2007. In 2018, 90 articles and 22 images (photographs and infographics) were sold, a significant increase on the previous year (26 texts and 11 images). The texts are used to create teaching materials, mostly for high school students.

Digital world
As online platforms began gaining ground over print media worldwide, Pesquisa FAPESP launched its website in 2001. As well as providing an open-access online archive of all print editions and special issues, the site now offers its own content. Since 2011, short videos based on content published in the journal have been released every 14 days. The website was redesigned last year, making the browsing experience more fluid and intuitive, and reducing the gap between the online and print versions of the journal.

The publication’s presence on social media began a little over a decade ago, initially with a Twitter profile (2008) and later on Facebook (2010). Its Instagram profile, created in 2012, is its fastest growing profile in recent years, reaching almost 25,000 followers in June, a 100% increase over the same month in 2018.

While the journal’s articles are based on the results of academic research, sometimes the reverse is also true, with academic research based on the publication. Since 2003, 26 theses and dissertations about Pesquisa FAPESP or a related topic have been defended at higher education institutions in São Paulo, Rio Grande do Sul, the Federal District, Minas Gerais, Goiás, and Santa Catarina. In the same period, the journal was the subject of 17 articles published in national periodicals.