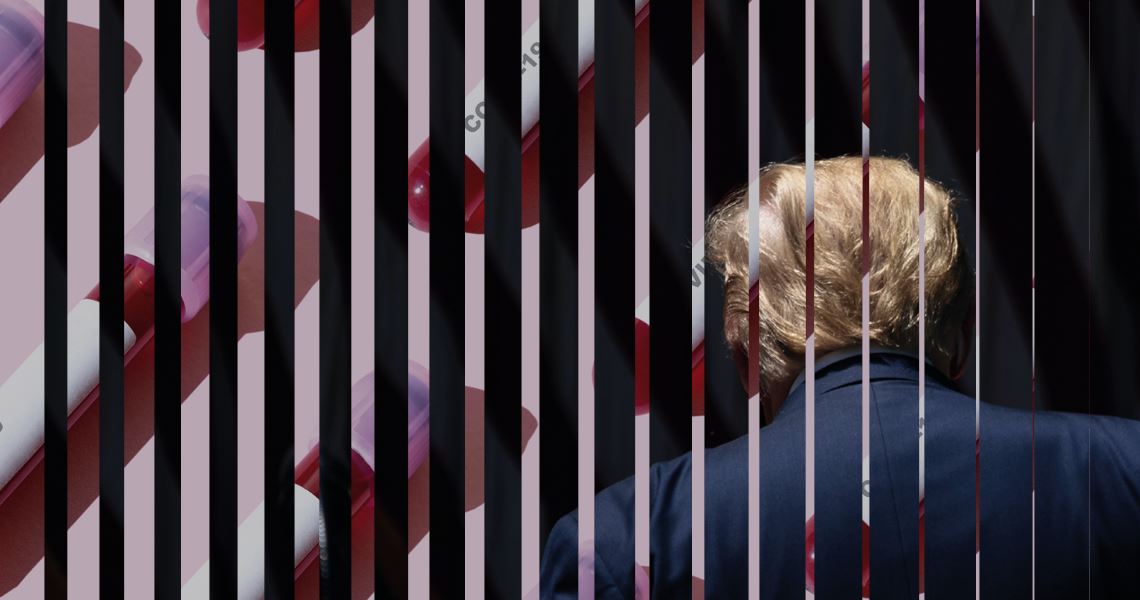 Trump wants a vaccine approved before the November elections

The representatives of nine companies developing COVID-19 vaccines, including Pfizer and AstraZeneca, issued a joint statement on September 8 reaffirming their commitment to scientific integrity during medical studies, reiterating that they will only submit vaccine candidates for approval by international regulatory bodies after they have demonstrated their safety and effectiveness in phase 3 clinical trials. Days earlier, executives from seven US biopharmaceutical companies published an open letter calling for “political considerations to be put aside” during the development of COVID-19 drugs and vaccines. “Our nation’s leaders should reassure the public that politics will not influence the development and approval of new medicines. Conclusions about both the safety and effectiveness of such medicines should be based on rigorous collection and assessment of data by all the appropriate bodies. Public health and the public’s trust in new medical products are dependent upon the integrity, transparency, and objective assessment of new data as they emerge,” they wrote. More recently, pharmaceutical companies Pfizer and Moderna have gone a step further, releasing details of their vaccine trials for the first time, including how they selected participants and how they are being monitored, the conditions under which testing would be stopped, and the evidence they will use to determine whether people who have received the vaccine are protected against COVID-19.

These moves are a response to increasing attempts to interfere with clinical testing schedules and the approval of medications and vaccines for the disease. In pursuit of political prestige and the economic growth that would result from announcing a solution to the novel coronavirus crisis, governments around the world are pressuring researchers and regulatory agencies to speed up trials—or skip them altogether. “It seems like the pandemic has brought science back to the center of political disputes between the world’s major powers,” says geographer Neli Aparecida de Mello-Théry, from the School of Arts, Sciences, and Humanities (EACH) at the University of São Paulo (USP). Since the pandemic began, the researcher has been studying the geopolitical effects of COVID-19 on economic interdependence between nations. According to Mello-Théry, the disputes we are now seeing could jeopardize our fight against the disease by creating the impression that vaccine safety has been sacrificed for political gain, making some people resistant to vaccination.

Before they can be sold and administered on a large scale, new drugs and vaccines need to be approved by regulatory bodies. Before being approved, they must undergo successive tests to measure their safety and effectiveness. This process can take years to complete, especially for new vaccines. Agencies are usually more demanding when it comes to vaccines because they are given to thousands of healthy individuals; any side effect, however rare, could affect many more people than a drug developed for a specific disease. In view of the current pandemic, however, with the rising number of COVID-19 deaths and new cases, worsening inequality, and severe recessions, this complex scientific process now has potentially major political and economic implications.

“In the USA, for example, the announcement of a vaccine could change the course of the presidential elections in November,” says Mello-Théry. President Donald Trump has placed increasing pressure on regulatory authorities to approve a vaccine by as early as October. His main target has been the Food and Drug Administration (FDA). Since May, Trump has shown a tendency to interfere with the agency in relation to COVID-19, such as when he ordered it to relax its inspection procedure for diagnostic tests developed by private labs and clinics. The FDA has already been accused of yielding to political pressure by authorizing the emergency use of certain COVID-19 treatments, such as hydroxychloroquine, despite little evidence of its effectiveness in patients affected by the virus. More recently, the agency approved emergency use of convalescent plasma therapy for people with the disease. The announcement was made on the eve of the Republican convention and the day after Trump accused the agency of delaying the approval of vaccines and therapeutics for political reasons. The pressure now faced by the FDA is to approve a vaccine before the elections, which in practice would mean reducing or eliminating the criteria usually adopted for the process.

According to Elize Massard da Fonseca, a professor from the Public Management Department at the Getulio Vargas Foundation in São Paulo, this type of behavior is not a new phenomenon, and is not restricted to government agencies or the pharmaceutical industry. “Pressure on the FDA to approve potent antiretroviral therapy in the early 1990s came primarily from advocacy groups for patients with HIV,” recalls the researcher, who is studying regulatory processes for pharmaceutical products. “The difference is that today these demands are more brazen, given the political and economic implications of approving a vaccine.” Fonseca says there is no chance of the FDA ignoring international guidelines and protocols when it analyzes the vaccine candidates. “It is one of the most respected agencies in the world, it would never risk its reputation in that way.” This does not mean, according to her, that the agency will not have to face the difficult decision at some point of authorizing a vaccine for emergency use in a small portion of the population—such as health professionals and individuals at high risk—before it is formally approved.

China, meanwhile, has invested heavily in research and development (R&D) over the last two decades, especially in biotechnology. They have built maximum security laboratories, acquired the best equipment and machines, and created rules for repatriating scientists working abroad (see Pesquisa FAPESP issue no. 283). The result is that of the 187 novel coronavirus vaccine candidates currently under development worldwide, 20 are from the Asian country. The most advanced is Sinovac Biotech’s Coronavac, which is now undergoing phase 3 clinical trials in several countries, including Brazil, where the company has a partnership with the Butantan Institute. “Unlike the USA, China’s endeavor to be the first nation to approve a COVID-19 vaccine has no internal political bearing, but is driven by its ambition to show the world that it is a power capable of competing with the USA scientifically, economically, and geopolitically,” Swiss lawyer Els Torreele, former director of the Access to Medicines Campaign for the international organization Doctors Without Borders, told Pesquisa FAPESP. “Testing their vaccines in other countries, offering priority access to the final product in return, is part of China’s strategy to expand their geopolitical influence and improve their image among Western nations.” Internally, however, the country does not seem to be implementing traditional protocols for testing and approving vaccines. In an unusual strategy, it has already begun administering vaccine candidates to military personnel and civil servants. According to an article in The New York Times, although the Chinese government has emphasized that volunteers are free to choose whether they receive the vaccine or not, officials and soldiers have said they feel pressured to participate in the tests.

In the rush to obtain a vaccine, Russia has even skipped some of the steps considered essential to verifying the safety of new compounds. In August, the country surprised the world by announcing the registration of Sputnik V, but without presenting any data on its phase 1 and 2 clinical trials. President Vladimir Putin was quick to claim that the vaccine is safe. “I would like to repeat that it has passed all the necessary tests,” said the Russian leader during a conference call with government ministers. He added that one of his daughters had already been vaccinated and was feeling well. She apparently experienced a mild fever after receiving the first dose. “After the second injection, she again had a slight temperature increase, and then everything was fine. She’s feeling well and has a high number of antibodies,” said Putin.

The pandemic has brought science back to the center of political disputes between the world’s major powers, says Mello-Théry

Researchers at the Gamaleya National Center of Epidemiology and Microbiology in Moscow waited nearly three weeks before publishing an article in The Lancet detailing the vaccine’s initial clinical trials. Almost immediately, however, a group of scientists from various institutions published an open letter expressing concern about the consistency of the data. “While the research described in this study is potentially significant, the presentation of the data raises several concerns which require access to the original data to fully investigate,” they wrote.

In addition to the potential scientific, technological, and economic benefits, Russia’s eagerness to enter the race for a vaccine against the novel coronavirus, according to Mello-Théry, is part of the Putin government’s strategy to expand its influence in Eastern Europe and Southeast Asia. “The aim is to present an alternative to the vaccines offered by the USA, the UK, and China.” Several countries have shown an interest, including Brazil. In August, the government of Paraná announced plans to work in partnership with Russia. More recently, the Russian Direct Investment Fund (RDIF) and the Bahia State Health Department signed an agreement to distribute 50 million doses of Sputnik V in the country.

Torreele warns that the rush to approve a vaccine could have serious implications regarding their safety and efficacy. “The only way to determine the safety of these compounds is to conduct clinical trials involving as many people as possible, which takes time. The current trials have been criticized for not being diverse enough, and even if they do try to include a wider range of subpopulations, the numbers will remain small in terms of detecting less frequent side effects,” she says. “These factors, added to suspicions over political attempts to accelerate the approval process, could undermine public confidence in new coronavirus vaccines.”

These impacts have already been reflected in opinion polls. One carried out by YouGov between September 9 and 11 highlights increasing reservations in the USA about taking a COVID-19 vaccine. In May, 55% of Americans said they would get the vaccine as soon as it is approved. That number has now dropped to less than a third of respondents. “In Brazil, an IBOPE survey published on September 5 found that one in four Brazilians are resistant to the idea of getting a COVID-19 vaccine,” says Dayane Machado, a PhD student from the Science and Technology Policy Department at the University of Campinas (UNICAMP).

Brazil is in a unique situation, with different levels of government—federal, state and municipal—having adopted uncoordinated, sometimes contradictory, approaches to the pandemic. According to Machado, “this tends to create feelings of uncertainty and distrust among the public that can be difficult to reverse.”

“The only way to progress in developing a vaccine and building a trusting relationship with the public is to invest in total transparency with regard to clinical trial protocols and data, and to ensure they are independently and openly reviewed by public health experts,” highlights Torreele.