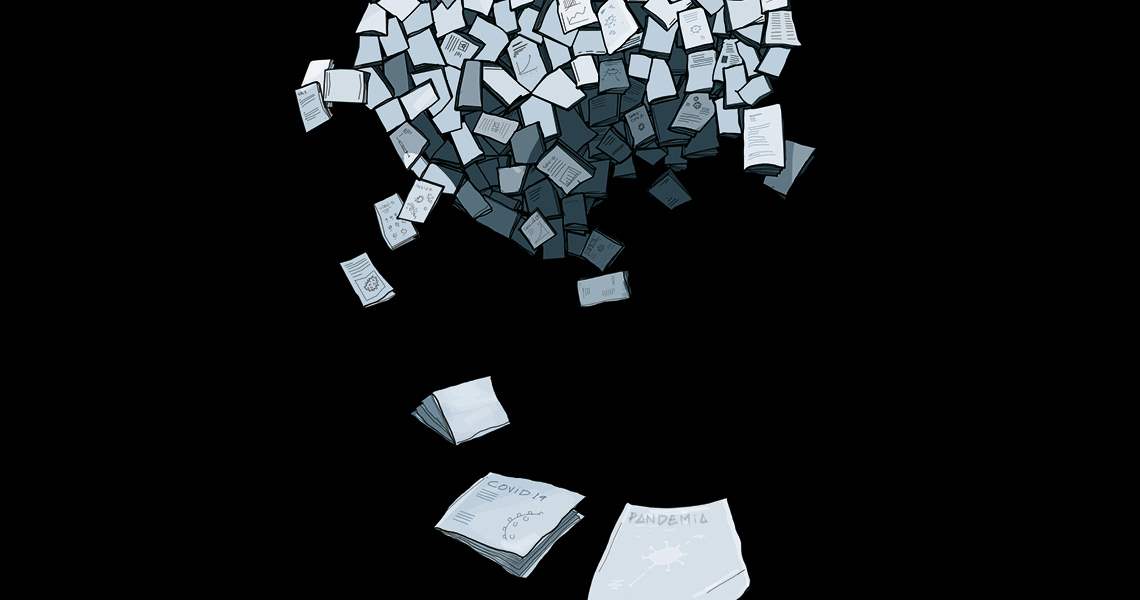 In over two years of the pandemic, around 500,000 studies on topics related to Covid-19 were published in the form of scientific articles or their preliminary versions, preprints, disseminated in public repositories. According to a survey released in April by Philip Shapira, of the Institute of Research and Innovation of the University of Manchester, UK, this formidable volume of information responded to almost 4% of global scientific output between 2020 and April of this year and has shifted the balance of knowledge generation. Available on the bioRxiv platform, the work analyzed the Dimensions database and observed that in the field of virology the proportion of articles about Sars-CoV-2 rose from 3.1% of the total in 2019 to 37.1% this year, and from 0.8% to 23.8% in the field of infectious diseases. The influence also extended into subjects unconnected to medicine—Covid-19 was the topic of 6.4% of sociology and law literature in 2021.

Scientific journals speeded up their manuscript assessment processes in order to give quick responses to the health emergency and many of them achieved exceptional performance. The latest edition of the Journal Citation Reports (JCR), a report by the company Clarivate that evaluates the impact and visibility each year of 21,000 periodicals around the world, showed that a group of journals from the field of medicine multiplied its influence and had an impact factor greater than 100 in 2021. This means that, last year, the articles published by these titles over the previous two years were cited more than a hundred times in other works, a sign of recognition for their contribution. The periodicals that performed best were Journal of the American Medical Association, The Lancet, Lancet Respiratory Medicine, Nature Reviews Drug Discovery, Nature Reviews Immunology, Nature Reviews Molecular Cell Biology, and New England Journal of Medicine (NEJM).

The most impressive performance was by British publication The Lancet. Its impact factor increased from 79.3 in 2020 to 202.7 in 2021, taking it to the top of the JCR ranking for the general and internal medicine category for the first time. It had three of the ten most cited Covid-19 articles in 2021, which described the clinical characteristics of the first patients hospitalized with the novel coronavirus in the Chinese city of Wuhan in 2019, the risk factors for mortality, and the epidemiological data from the first outbreak of the pandemic. Since the JCR began being produced, 45 years ago, first place in general and internal medicine always belonged to NEJM, from the USA. Despite dropping to second place, this journal’s impact factor increased from 91.2 in 2020 to 176.1 last year.

The increase in the volume and repercussion of publications about Covid-19 has also led the prestigious journal Nature to be the first journal to surpass the one million mark for citations within a single year, achieved in 2021. “The novel coronavirus caused millions of deaths, overloaded health systems around the world, and forced isolation in communities used to living in a globally connected world,” said Nandita Quaderi, editor in chief of the Web of Science database, on the release of the JCR. “We are now beginning to understand some positive aspects, such as unprecedented scientific collaboration, the accelerated speed of innovation, and the discovery of treatments and vaccines.”

The response involved the majority of the world’s countries. Italy, one of the nations that suffered most from the first wave of the pandemic, was proportionally the country with the highest engagement according to analysis by Shapira: 4.15% of all the articles published in journals indexed by Italian scientists between 2019 and 2022 dealt with the novel coronavirus. The rate reached 3.37% in the UK, 2.9% in the USA, and 1.12% in China.

Brazil, with 2.62% of its output linked to the disease ranked similarly to countries such as Canada (2.68%) and Australia (2.56%). “During the pandemic, the number of articles submitted to Brazilian journals from the SciELO library increased by 23%,” observes Abel Packer, coordinator of the collection that unites 215 open-access periodicals from the country in different areas of knowledge. “During the quarantine, many researchers took advantage of the forced isolation to write the manuscripts they had planned, creating extra work for the editors,” he says. Between 2020 and July 2022, the SciELO library published almost 60,000 scientific documents, including original articles, reviews, and editorials. Of this total, 3,773, the equivalent of a little over 6%, were about Covid-19.

Health science journals dedicated 11% of their content to the subject. The topic also mobilized other disciplines. On the list of the ten titles that gave the most coverage to the health emergency from the SciELO library, one that stood out was the Revista de Administração Pública, edited by the Getulio Vargas Foundation (FGV) since 1967. Between 2020 and July 2022, it published 60 articles on pandemic-related subjects—a third of its total production. The space given by the FGV periodical was second, proportionally, only to the Brazilian Journal of Infectious Diseases, with 63 articles about the illness among the 179 published between 2020 and 2022. The list of the ten periodicals that had the most engagement (see table), contains titles on health as well as work, education, public policy, and interdisciplinary fields.

A curious trend was observed on the list of articles from Brazilian journals that received the most citations: a large part of them dealt with the effects of the pandemic on mental health. The list contains studies about the levels of stress, depression, and anxiety amid social isolation; the relationship between personality traits and prevention of the illness; and the impacts on mental health and on the development of Brazilian children. The paper with the greatest repercussion, with over 500 citations on the Web of Science database, was an editorial from the Brazilian Journal of Psychiatry titled “Pandemia de medo e Covid-19: Impacto na saúde mental e possíveis estratégias” (Pandemic of fear and Covid-19: Impact on mental health and possible strategies), which analyzed the scientific literature available until the start of 2020 regarding the impact of epidemics and natural disasters on people’s mental health, and based on this evidence listed recommendations for governments, hospitals and reference centers, support groups, and individuals for facing the problem.

The lead author of the study, psychologist Felipe Ornell, says that the idea for the work arose in February 2020, before the emergence of the first cases in the country. “I talked with psychiatrist Felix Kessler, who had been my master’s co-supervisor, and we noticed that there was widespread panic among the people. This manifested itself initially in behaviors such as the impulse to fill the shopping cart with toilet paper and stockpile at home. Countless types of accumulated fear would create a burden of stress that would chronically aggravate or trigger mental symptoms and disorders,” says Ornell, who works in the Alcohol and Drugs Research Center of the Hospital de Clínicas de Porto Alegre and is doing a PhD in psychiatry at the Federal University of Rio Grande do Sul. “This has probably never occurred on such a large scale and our hypothesis is that this fear would generate a burden of mental health issues, or better, a pandemic of fear within a biological pandemic.” According to him, the fact the article was approved and published quickly—the following month, in March—was fundamental for it becoming a reference for subsequent studies. “The editorial was one of the first to deal with the issue, it launched several hypotheses, most of which were later explored and confirmed.” The work, which is among the five most read from the Brazilian Journal of Psychiatry website, helped to elevate the journal’s impact factor, which rose from 2.46 in 2020 to 6.3 in 2022.

Naturally, only a fraction of the studies made a difference in fighting the pandemic. An analysis carried out by a team from Northwestern University’s Kellogg School of Management and the Massachusetts Institute of Technology (MIT), in the USA, showed that two-thirds of the authors that published about Covid-19 in 2020 did not have experience with topics related to the illness. By using an analytical tool capable of measuring an article’s degree of novelty, a group discovered that the further a researcher strayed from their usual area of specialization, the lower the impact of their works involving the novel coronavirus was.

It is true that after explosive growth in 2020 and 2021, the proportion of new studies about Covid-19 has begun to run out of steam this year. According to Philip Shapira’s analysis, the portion of articles on the illness even increased in the first four months of this year, but at a slower rate than seen in 2021. And in 70 subareas, such as pharmacology, emergency medicine, and the respiratory system, the proportion has already suffered a reduction. “Now that lots of clinical and epidemiological knowledge gaps have been filled, the focus for the majority of researchers is returning to their specialized interests,” Alimuddin Zumla, specialist in infectious diseases of the University College London, told the journal Science. This is good news, according to him. “There are many other priority diseases that have been neglected during the Covid-19 era and they need attention.” A study published in February in PLOS ONE highlighted a shift in research funding for the novel coronavirus and, at the same time, a reduction of investment in clinical trials and new treatments, interrupted as a result of the health emergency—the only exception being clinical trials for Sars-CoV-2 vaccines.

“It is necessary to redirect the incentives for basic science and neglected or temporarily abandoned areas of biomedical research,” wrote the authors of the study Massimo Riccaboni, of the School for Advanced Studies Lucca, in Italy, and Luca Verginer, of the Swiss Federal Institute of Technology in Zurich. For Shapira, a perennial fruit of the mobilization is the learning that the scientists have accumulated. “Facing the disease has probably trained a whole group of researchers and taught them to think of pandemics from medical and public health perspectives. There has been an investment in human capital,” he told Science.