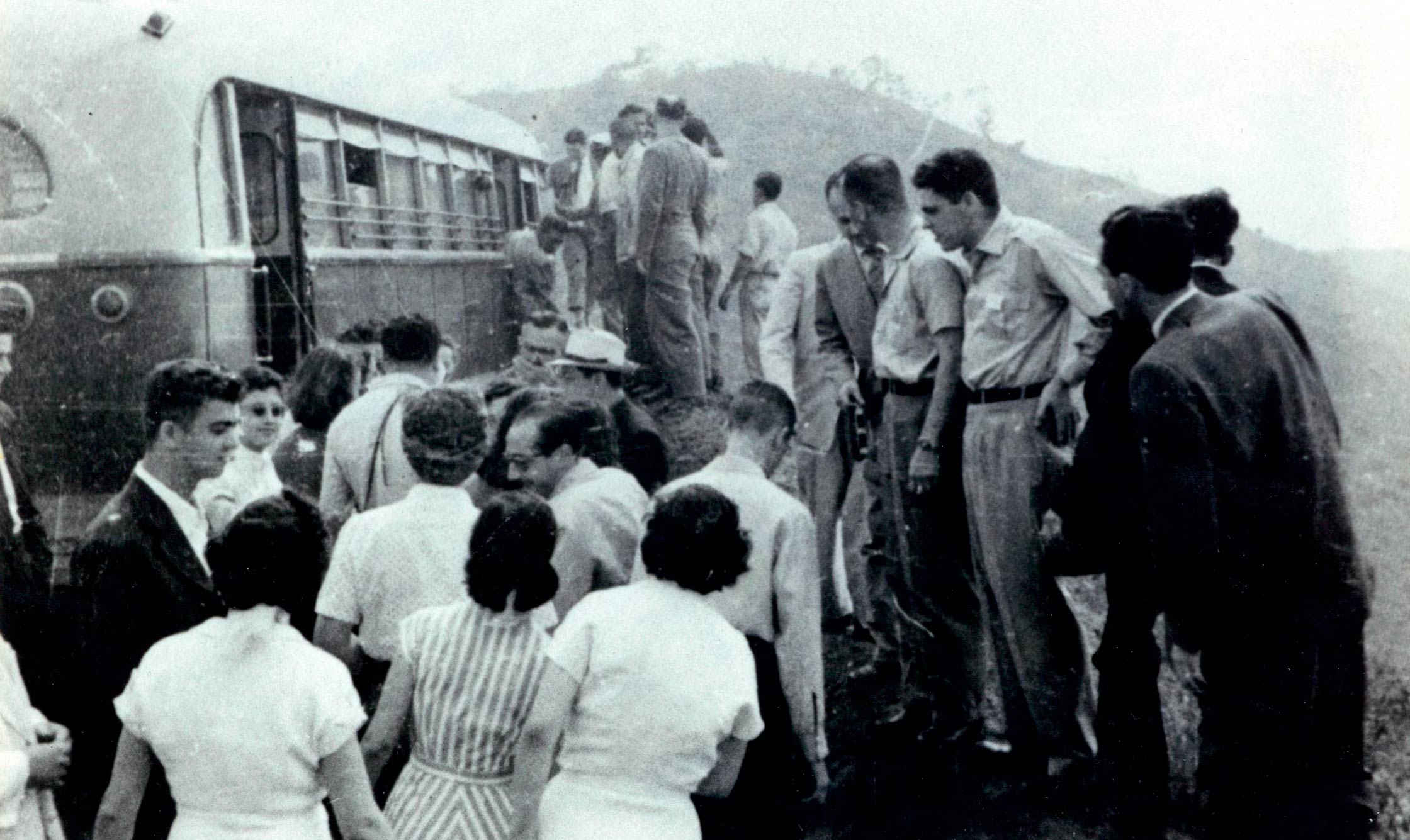 Participants of the 3rd Annual Meeting of the SBPC, held in 1951 at the Federal University of Minas Gerais, in Belo Horizonte

In 2010, while still a journalism student, Ádria Siqueira attended the 62nd annual meeting of the Brazilian Society for the Advancement of Science (SBPC) in Natal, Rio Grande do Norte. In 2014, she traveled across the country to take a two-week course on scientific journalism at the 66th annual meeting in Rio Branco, in the state of Acre. The following year, she was accepted into the master’s program of the Laboratory of Advanced Studies on Journalism at the University of Campinas (LABJOR-UNICAMP), and in 2018 Siqueira began her doctoral studies in public health at the School of Medical Sciences at the University of Campinas (FCM-UNICAMP). “My plan is to pursue an academic career with a focus on health communication,” she says.

The course in Acre was taught by teachers from LABJOR and drew 15 students from across the country. It was one of the recent innovations of the SBPC annual meetings: events with greater public visibility designed to promote Brazilian science and encourage young people like Ádria, who are interested in an academic career. In 2017, approximately 15,000 students attended researchers’ lectures and debates at the Federal University of Minas Gerais (UFMG), in Belo Horizonte.

This year’s conference was held at the Federal University of Alagoas, in Maceió, from July 22 to 28, and enjoyed a similar level of public involvement. Discussions included the importance of basic science, funding for scientific and technological production, diseases caused by arboviruses (dengue, zika, chikungunya, and yellow fever), slavery in Brazil, the use of quilombola territories (lands occupied by former slaves and their descendants), family farming, gravitational waves and neutron stars, bacterial resistance to antibiotics, and health policies, among other topics. The debates this year marked 70 years since the founding of the SBPC.

With their changing locations, free admission, and varying themes, the SBPC meetings also attract public attention due to a variety of other activities that have gained popularity in recent years. These include free exhibits by institutions, research centers, and companies displaying items such as model rockets, cosmic ray detectors, robots, and fossils, which attract some 6,000 visitors per day. The last day of the exhibits is reserved for families, and is also free of charge.

Unlike what one might think at first, these are not just traveling spectacles. “The lectures, debates, and parallel activities always leave behind seeds, even though germination may take a while. The annual meeting is more like seeding the field than setting off fireworks,” says physicist Ennio Candotti, director-general of the Museu da Amazônia (MUSA), president of the SBPC for four administrations, and currently its honorary president.

Publications
Since 1949, the SBPC has published the magazine Ciência e Cultura, initially financed by businessman Francisco Matarazzo Pignatari (1917–1977). Directed for 18 years by physician José Reis (1907–2002), one of the society’s founders, the magazine was at first a quarterly vehicle for articles written by researchers. In 1991, it began to be published bimonthly in English. After a few years out of publication due to lack of funding, in 2002 it entered into a new phase as a Portuguese language quarterly with LABJOR in charge of editorial production.

With a current circulation of 8,000 copies, Ciência e Cultura “publishes thematic editions exploring the trends of scientific development, with articles that popularize science—always using references—and sections with stories and news. The journal’s target audience is postgraduate students,” says linguist Carlos Vogt, former UNICAMP dean (1990–1994), SBPC vice president (2001–2003 and 2003–2005), FAPESP president (2002–2007), and chief editor of the journal from 2002 to 2007, and currently, since 2017.

Exhibit space and activities for SBPC Youth, which joined the 69th annual meeting at UFMG, in 2017UFMG/Foca Lisboa

In 1982, at the 34th annual meeting in Campinas, the first issue of another SBPC publication, Ciência Hoje (Science today) was published, created by Ennio Candotti with neurologist Roberto Lent, physicist Alberto Passos Guimarães Filho, and geneticist Darcy Almeida (1930–2014). The magazine was initially supported by the Brazilian National Council for Scientific and Technological Development (CNPq) and the Brazilian Funding Authority for Studies and Projects (FINEP). It featured reports from journalists and articles by researchers focused on education, written to reach a broad audience by using common language and current themes: the first issue discussed pollution in Cubatão, on the São Paulo coast. The initial circulation was 15,000 copies and rose to 80,000 in 1987. The results led to the launch in 1986 of Ciência Hoje das Crianças (Science today for children). “For more than 20 years, by means of agreements with publishers, the Ministry of Education and Culture bought 180,000 subscriptions of Ciência Hoje das Crianças,” says Guimarães Filho, president of the Science Today Institute responsible for the publication of the two magazines.

At the end of 2014, the government didn’t renew its subscriptions to the children’s magazine. The situation was aggravated by the loss of Ciência Hoje subscribers, and led to layoffs of the production staff and to the suspension of the magazines. In April of 2016, Ciência Hoje stopped printing, and Ciência Hoje das Crianças followed suit in December. According to Guimarães Filho, publishing agreements with the Brazilian Federal Agency for Support and Evaluation of Graduate Education (CAPES), and subscription purchasing arrangements with municipalities allowed for the site’s reactivation and for the two magazines to resume publication—initially only online—in July 2018. “We’re coming back, but with extreme caution,” he notes.

Cover of the first issue of Ciência Hoje magazine, launched in July of 1985, in CampinasSBPC Collection

The magazines weren’t enough to satisfy the SBPC’s plans. “We observed that we needed a more frequent publication,” says attorney José Monserrat Filho, who created Jornal da Ciência (Science journal), another SBPC publication, once again with Ennio Candotti’s participation. Launched in 1985 at the 37th annual meeting in Belo Horizonte, under the name Informe Ciência Hoje (Science today report), it initially published weekly news and discussions on science and technology policies. By criticizing decisions of the federal government and its representatives in the area of science and technology, it became known as “the fighting cock of Brazilian science,” says Monserrat, editor of the publication until 2007. In 1994 the JC online began, a daily clipping service of news and articles on science and technology, which currently has 10,000 subscribers. In 1997 Informe Ciência Hoje changed its name and became the biweekly Jornal da Ciência, maintaining its focus on news and debates about scientific and technology policy, and currently has 15,000 readers.

The launching of Ciência Hoje, Ciência Hoje das Crianças, and Jornal da Ciência in the 1980s marked a new phase in the history of the SBPC. They had gone through a difficult period prior to this, in the 1970s, clashing with the military regime. In 1977, the federal government tried to prevent the SBPC’s 29th annual meeting. Originally to be held in Fortaleza, Ceará, it was first transferred to the University of São Paulo, where it was again prohibited, and finally to the Pontifical Catholic University of São Paulo (PUC-SP). “This is the Vatican’s territory,” argued the then archbishop of the capital and dean of PUC-USP, Paulo Evaristo Arns (1921–2016), blocking the government’s intervention. The SBPC publicly defended political amnesty and the return of teachers who had been exiled by the military regime.

On the last day of the meeting, students, teachers, and scientists participated in a musical and theatrical spectacle, “The SBPC ‘77 Brazilian Popular Music Show,” at the Portuguesa Sports Gymnasium. According to the State Department of Social and Political Order (DEOPS), there were more than 20,000 in attendance at the show, whose revenues went to the SBPC. Two months later, the military invaded the PUC campus and arrested students and professors who were considered opponents of the military government. In June of 2018, while searching for documents about the SBPC, historian Walkiria Chassot found a 121-page report prepared by the DEOPS, with clippings of published newspaper articles about the debates and presentations made at the PUC meeting, showing how closely the government had followed researchers and those interested in science.

Exhibit space and activities for SBPC Youth, which joined the 69th annual meeting at UFMG, in 2017UFMG/Foca Lisboa

The 1977 gathering wasn’t the only time an SBPC annual meeting almost didn’t happen. In the early 1990s, the SBPC criticized the government of the then president of the Republic, Fernando Collor de Mello (1990–1992). “In 1992, Collor ordered that the budget for the meeting be suspended, but Lindolpho de Carvalho Dias, who was one of the CNPq directors at the time, had some presence of mind and said he had already transferred the money for the annual meeting,” says Candotti. Dias presided over the CNPq during the following administration, from 1993 to 1995. Gradually, over the following years the SBPC conferences recovered their essentially scientific character.

In parallel to the annual meetings, (the first of which was held in Campinas in 1949), the SBPC promotes conferences for Brazilian or foreign scientists visiting Brazil. From 1948 to 1951, 40 meetings of this kind were held, conducted by researchers such as pathologist Henrique da Rocha Lima (1879–1956), neurologist Miguel Ozorio de Almeida (1890–1952), physicists César Lattes (1924–2005), José Leite Lopes (1918–2006), and Marcelo Damy de Souza Santos (1914–2009), bacteriologist Otto Bier (1906–1985), and naturalized Brazilian chemist Heinrich Rheinboldt (1891–1955). Among the foreigners who participated in these conferences were French physician and director of the Pasteur Institute of Paris, Jacques Tréfouël (1897–1977), Argentine physiologist Bernardo Houssay (1887–1971), winner of the 1947 Nobel Prize in Physiology or Medicine, and Canadian physiologist Charles Best (1899–1978), who discovered insulin. Through as many as four regional meetings a year, the SBPC seeks to motivate the debate on issues of local interest, such as the preservation of the Cerrado (wooded savanna), and the drought in the Northeast, with meetings in cities like Feira de Santana, in Bahia, Cruzeiro do Sul, in Acre, and Oriximiná, in Pará.

This is the third of four articles on the SBPC’s 70-year history.
The next story in this series will discuss the future of the SBPC.