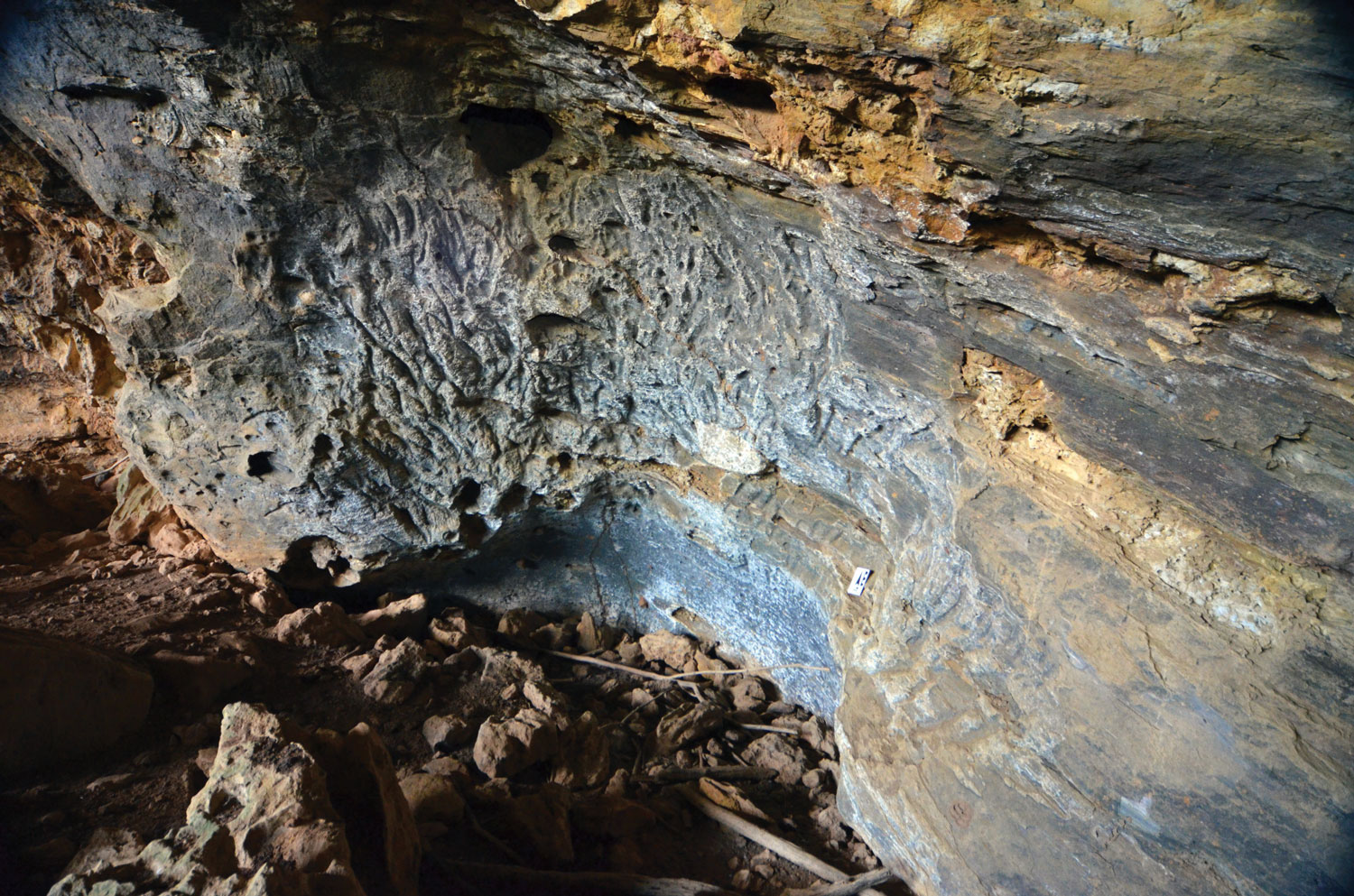 Chamber in Minas Gerais, showing marks resembling scratches on the wall and a hollow that may have served as a resting spot for ground sloths

The Valley of Giants is what paleontologist and oceanographer Francisco Buchmann calls a 250-meter-long stretch of the Esmeril River in rural Rio Pardo de Minas, a municipality of 30,000 in northern Minas Gerais State. There, the steep slopes along the river are covered by tall, dense forest infested with ticks and bees. The vegetation obscures the entrance to six caves of impressive size, which are as long as 40 m and, in most cases, terminate in a spacious chamber 5 to 10 m wide and up to 4 m high. Most strikingly, they may have been dug by large mammals, such as giant armadillos and ground sloths, which lived until approximately 10,000 years ago in what is now Brazil and constituted the class of animals known as South American megafauna.

Buchmann, a professor at São Paulo State University (Unesp) in São Vicente, became aware of these caves in 2012, when geologist Vitor Ferreira, from the mining company Sul Americana de Metais, discovered them by chance while looking for a spot to establish an iron-mining facility in the area. The following year, Buchmann returned with his team to map the caves and investigate the origin of curious marks etched into the walls.

The tunnels, which feature arched ceilings and walls, as well as grooves in the rocks compatible with scratch marks made by strong claws, led the researchers to conclude that the caves in the Valley of Giants must have been excavated by large animals, such as those belonging to the South American megafauna. In a paper published in the Revista Brasileira de Paleontologia in May 2016, the group asserts that these caves did not develop through water erosion or some other geological process. They were likely huge paleoburrows, or chambers dug into the rock by animals, possibly the largest such burrows ever discovered on Earth.

Along with geologist Heinrich Frank of the Federal University of Rio Grande do Sul (UFRGS) and other colleagues, Buchmann has discovered more than 1,500 paleoburrows in southern and southeastern Brazil over the past 15 years. However, they regard the ones in the Valley of Giants as special, along with nine others that were found in three neighboring river valleys within the surrounding eight kilometers. The researchers see these paleoburrows as different because they hold stronger evidence that the animals that excavated them lived in groups: the burrows are close together, and in the innermost chamber of each, there is more than one space that they conjecture served as the animals’ resting spot. “A community of ground sloths likely excavated these tunnels,” Buchmann hypothesizes. “A family probably lived there.”

Ground or land sloths have been extinct for at least 10,000 years and are related to present-day sloths, though they had very different habits. The six species of sloth that exist today spend their lives holding onto tree branches and trunks, where they feed on leaves and fruit. Their arms and feet are not adapted to walking on the ground, which the sloths do rarely and with great difficulty while leaning on their elbows. The nearly 100 species of ground sloths that lived in the Americas between 15 million and 10 thousand years ago used all four feet to walk on the ground and occasionally stood upright, which left their front legs free to grasp fruit or to dig.

Despite the name giant sloths, these animals varied considerably in size. The largest ones belonged to the family Megatheriidae, which could reach six meters tall when standing upright. Studies of fossilized bones suggest, however, that the articulation of their arms did not enable the megatherids to dig easily, despite their enormous curved claws. This fact and a comparison with the marks found in the paleoburrows in Minas Gerais led Buchmann’s team to suspect that these caves were sculpted into the rocks by species of the family Mylodontidae, which grew as tall as two meters.

Unesp and UFRGS paleontologists interpreted the hundreds of grooves etched into the walls of the paleoburrows as marks left by the animals’ claws as they opened the tunnels. At present, these marks are the principal indicators of the identity of the excavators, given that no primitive sloth fossils have ever been found in the paleoburrows of Brazil.

Buchmann compared silicone molds of these marks against specimens of fossilized feet from ground sloths found in Minas Gerais, which are all preserved at the Museum of Natural Sciences at the Pontifical Catholic University (PUC) in Belo Horizonte. The marks on the walls of the paleoburrows compared more favorably with the claws of mylodontids of the genus Valgipes than with the claws of other potential excavators, such as the extinct giant armadillos of the genus Pampatherium, which inhabited what today are the Pampas of Argentina and southern and southeastern Brazil during the same period.

The researchers noted another feature common to the 15 paleoburrows in northern Minas Gerais. In the last chamber, next to the claw marks, there were always one to three hollows in the wall very close to the ground, each one measuring 1 to 3 meters wide (see the photo on page 46). “The surface of the hollows is smooth and appears to be very polished,” notes Buchmann. He believes that these surfaces were beds, the mylodontids’ favorite resting spots.

Paleontologists have already raised the possibility that at least some species of ground sloths may have lived in groups. Buchmann favors this hypothesis to explain how sloths were able to open such large tunnels in the Valley of Giants. “When I think about the volume of sediment excavated, I can’t imagine how a single individual could have done this,” he says. “I think it’s most likely that there was a colony of animals living and digging together.”

“These discoveries represent a milestone,” says Cástor Cartelle, a paleontologist specializing in prehistoric mammals and curator of the museum at PUC-Minas. “The work of Buchmann’s team has yielded numerous interesting pieces of evidence that the animals occupied these burrows for at least some time and left marks on the walls there.”

Cartelle is not convinced, however, that the burrows were occupied by sloths. He says that there is considerable variation in the size and shape of sloth claws, even among individuals of the same species, and he questions the identification of the marks. “Why would a sloth dig a burrow?” he asks. “A burrow this size would not provide protection against a predator such as saber-toothed tigers.” In his opinion, the most likely explanation is that the burrows were made by giant armadillos, such as Pampatherium.

Buchmann suspects that the burrows were probably not excavated for safety reasons because sloths had few predators. He and his colleagues think that the most likely hypothesis is that the sloths were excavating in search of shelter from the climate, which, at that time, was colder and dryer. Ground sloth anatomy suggests that, similar to present-day sloths, they had difficulty maintaining their body temperature.

Cartelle raises other possibilities to explain the size of the burrows and the signs of occupation by several animals. There may have been large fissures in the rocks of these mountains, in which case, the animals merely completed the openings rather than carrying out the full excavation. Another possibility is that one animal occupied the burrow, left its marks, and some time later, another member of the species did the same.

“I agree that occupation at different times by animals of similar size is a more plausible explanation for the existence of more than one resting place in these burrows,” says Renato Lopes, a paleontologist at the Federal University of Pampa (Unipampa) in Rio Grande do Sul State, who has performed collaborative work with Buchmann and Frank. “We know of no xenarthrans [an order of mammals that includes armadillos and sloths] that form familial groups beyond mother and offspring.”

Sizes S and L
The Brazilian paleoburrows are considered to be the world’s largest ichnofossils—marks made by animals that are preserved in rock, such as footprints and burrows. Similar to living species and fossils, ichnofossils are classified into genus and species. Lopes, Buchmann, Frank and Felipe Caron, from Unipampa, published the first official designation of paleoburrows found in Brazil, Uruguay, Paraguay and Argentina in the journal Ichnos in September 2016. There are paleoburrows in other regions, but they are not as large. The tunnels attributed to excavation by giant armadillos or ground sloths are ichnofossils of the genus Megaichnus.

This new genus has been divided into two species. The largest and widest paleoburrows, attributed to sloths, belong to the species Megaichnus major (see illustration). Most of these have been found in southern Brazil and a few others in the states of Minas Gerais and São Paulo. In 2015, one was discovered in Acre State and another in Rondônia State. The latter, found on the outskirts of the city of Porto Velho, is the most recent and extensive of the paleoburrows, measuring 600 m long.

The narrower and more abundant paleoburrows were given the classification Megaichnus minor. Most of these are filled with sediments brought in by flooding. The few open tunnels stretch for more than 30 m and may bifurcate and form galleries. On their walls, researchers have identified marks from claws, fur and carapace plates from giant armadillos of the genera Pampatherium and Propraopus.

Buchmann heads the Palaeoburrows Project carried out by researchers from six Brazilian institutions, who have identified thousands of such tunnels over the past 10 years. The group is working to identify and map the paleoburrows and to publish what is known about them in southern Brazil, where many were known to the local populace but have been mistaken for caves or attributed to excavations performed by indigenous peoples.