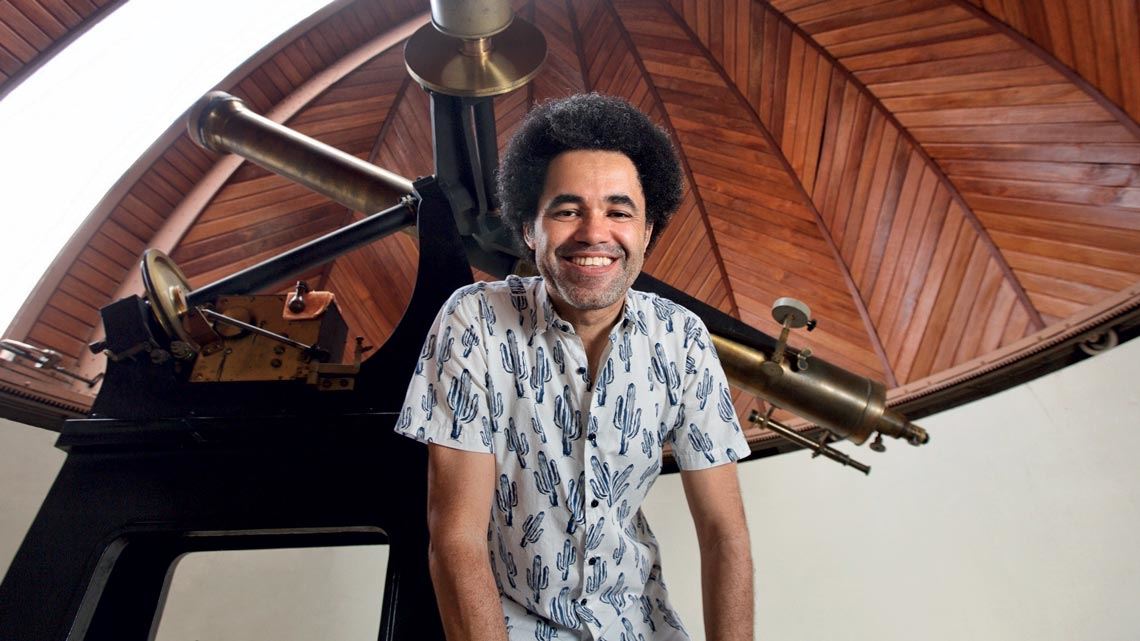 Driven since childhood by a desire to understand how the Universe was formed, it was by observing space that researcher Alan Alves Brito found the path that would lead him to specialize in the field of stellar astrophysics, a branch of astronomy that studies how stars are born through physics and chemistry. “The abundance of different chemical elements in the atmospheres of stars tells us how they were formed,” explains Brito, from the Astronomy Department at the Physics Institute (IF) of the Federal University of Rio Grande do Sul (UFRGS) and director of the university’s astronomy observatory.

Born in Vitória da Conquista, Bahia, Brito spent much of his life in Feira de Santana. In 1997 he enrolled on the new undergraduate course in physics at the State University of Feira de Santana (UEFS), and enthusiastically welcomed the news that astronomers Vera Aparecida Fernandes Martin and Paulo César da Rocha Poppe, both from the Institute of Astronomy, Geophysics, and Atmospheric Sciences (IAG) at the University of São Paulo (USP), would be joining the teaching staff the following year. “Through physics, I found a way of learning about astronomy, since there was no undergraduate course in the field in my city,” recalls Brito, who was able to focus on astronomy for his undergraduate research project after the two professors arrived from São Paulo.

Later, during his master’s and PhD, he looked more closely at the chemical elements that make up the atmosphere of stars located in the central area of the galaxy known as the bulge. During his postdoc, which he studied on visits to Australia and Chile, he expanded his research into extragalactic globular clusters.

Engaged in the discussion of historically structured racism in Brazil, Brito uses astrophysics as a starting point for his students to reflect on race and gender inequality in science. “As well as showing that astrophysics is not so distant from everyday life, I try to use it to help people understand their own context.”

Since 2017, the astrophysicist has been part of Akotirene Kilombo Ciência, a project involving black students from a school in the Morada da Paz quilombo community in the Metropolitan Region of Porto Alegre, Rio Grande do Sul. The objective is to integrate physics, astronomy, and natural sciences into daily life in the quilombo. “We built a laboratory, bought science books and a telescope, and made observations. We also work with children from indigenous communities and other quilombo groups and schools in the region,” he explains. At the events, which include lectures, seminars, and discussions on the periodic table, the researcher highlights the role of science and education in combating prejudice and aiding the quest for racial equality.

Brito is author of the book Antônia e a caça ao tesouro cósmico (Antonia and the cosmic treasure hunt) (Appris, 2020), which addresses concepts of science education in elementary and high schools. “It tells the story of a girl from a public school in the Brazilian countryside who is in love with astronomy,” he says. In 2019, the researcher also released Astrofísica para a educação básica: A origem dos elementos químicos no Universo (Astrophysics for primary education: The origin of chemical elements in the Universe) by the same publisher.