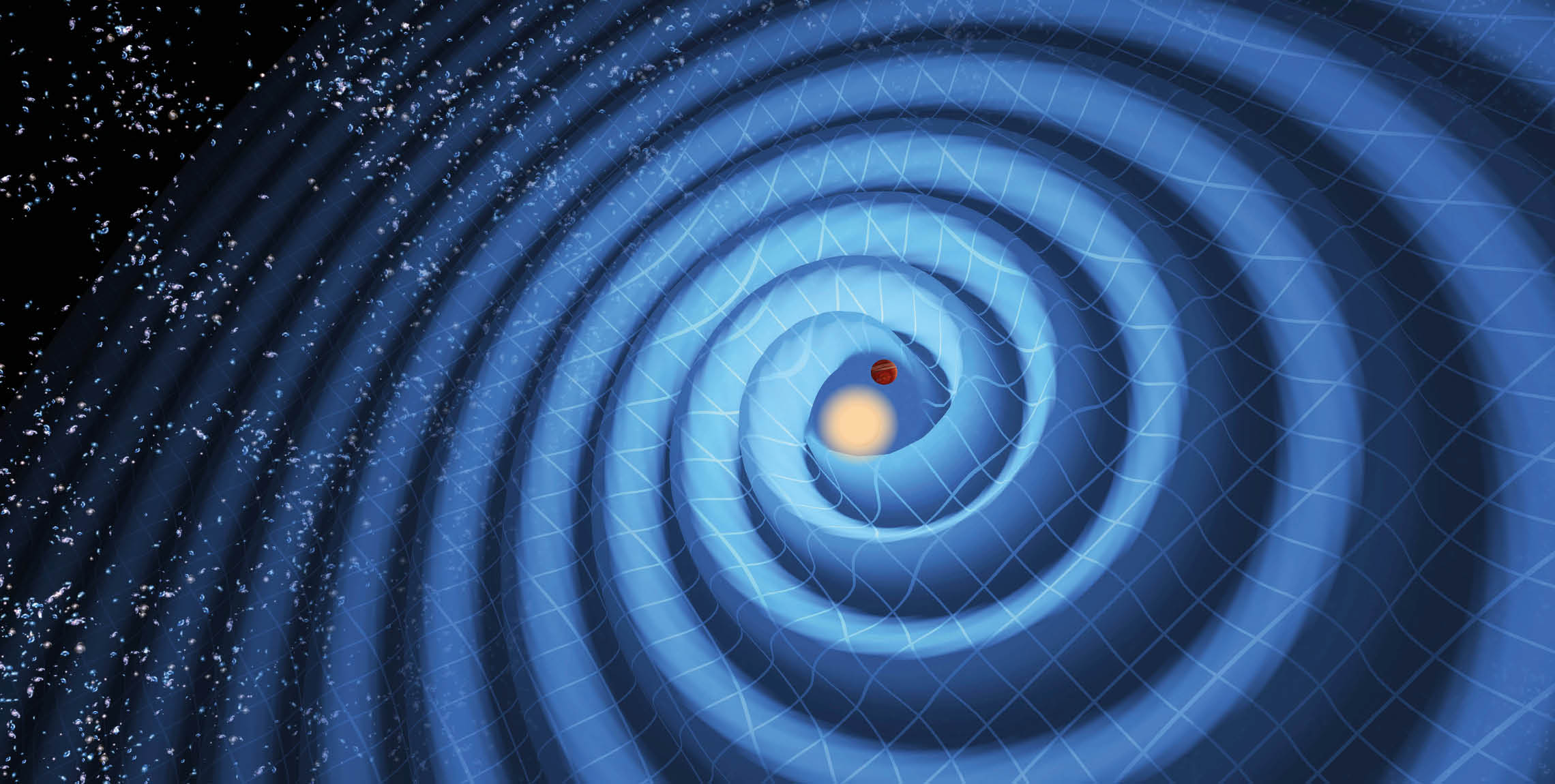 Illustration of a binary system, composed of a star and an exoplanet, emitting gravitational waves

Since September 2015, when the twin detectors of the Laser Interferometer Gravitational-Wave Observatory (LIGO) first recorded gravitational waves—a phenomenon predicted by Albert Einstein (1879–1955)—the number of events observed and associated with this distortion of space-time have literally exploded. Most have involved distant binary systems, located between 130 million and 3 billion light-years away from Earth and composed of two massive celestial bodies—usually a pair of black holes or neutron stars. These bodies orbit around a center of gravity, spiraling progressively closer toward a tremendous collision that results in the production of gravitational waves.

In an article published in the scientific journal Monthly Notices of the Royal Astronomical Society on June 21, a trio of astrophysicists from the University of São Paulo (USP) and the Federal University of Rio Grande do Norte (UFRN) proposed that gravitational waves could be used to discover and study other binary formations—composed of a star similar to the Sun and a giant exoplanet with an ultra-short orbital period—that are much less energetic and closer to Earth, less than a thousand light-years away. These types of exoplanets have masses greater than Jupiter, the most massive planet in our solar system, and are almost “glued” to their star, taking about an hour to complete one full orbit around it. Earth takes about 365 days (which we call a year) to completely orbit the Sun.

“Earth-based detectors like LIGO do not have the resolution needed to register the weak gravitational waves emitted by this type of planetary system,” explains USP’s José Ademir Sales de Lima, lead author of the study. “But we did some calculations and found that the Laser Interferometer Space Antenna [LISA] will be able to measure them in some cases.” Coordinated by the European Space Agency (ESA), LISA will be the first space observatory dedicated to measuring gravitational waves. It is expected to begin operations in the 2030s. Of the approximately 2,800 known planetary systems, just over a dozen are formed of a star and an ultra-short-period exoplanet.

Lima and his colleagues Francisco Edson da Silva and João Vital da Cunha, both from UFRN, calculated the probable level of gravitational waves emitted by 14 such systems, all with exoplanets that orbit their star in less than 80 minutes. In the end, they concluded that only three of them emit enough gravitational waves to be detected by LISA: GP Com b, V396 Hya b, and J1433 b. These exoplanets have masses 18 to 57 times greater than Jupiter and are located between 245 and 737 light-years from Earth. Because they are extremely close to their star, they are too hot to contain liquid water. “Like any binary system, every exoplanet orbiting around a star generates gravitational waves. However, the vast majority are very weak, so we are unable to detect them,” explains Vital.

Regular emissions
Compared to the strong signal released in one huge burst by collisions between two supermassive black holes or neutron stars, a planet moving around a star produces a tiny, almost imperceptible level of gravitational waves. The first black hole collision, discovered in 2015 by the scientific collaboration LIGO, generated gravitational waves with a maximum power of 3.6 x 1049 watts (), lasting just a few milliseconds. LISA will be able to measure emissions much fainter than those recorded by LIGO.

Despite being weak, the disturbance caused by gravitational waves from binary systems with ultra-short-period planets has one observational advantage, according to the authors of the study: their emissions will be almost continuous and regular, instead of creating a strong but one-off event that is not repeated, as is the case with the detections made by LIGO. “We can therefore monitor the gravitational waves generated by these planetary systems on a daily basis,” says Lima. As the planet orbits around the star, its gravitational wave signal will be produced at fixed time intervals that in theory will be measurable by LISA. When planets have an orbital year of just one hour, these waves could be recorded dozens of times in a single day of observation.

Astrophysicist Odylio Aguiar, from the Brazilian National Institute for Space Research (INPE), which is part of the LIGO collaboration, believes it will be difficult to discover new exoplanets by detecting gravitational waves from binary systems, even after LISA starts operating. “The exoplanets analyzed in the Monthly Notices article will fall into the region of LISA’s sensitivity curve known as irresolvable galactic binaries,” explains Aguiar. “There are so many binary systems in our galaxy in this range that all of their signals together will produce so much background astrophysical noise that in practice it will be almost impossible to discover new exoplanets. But gravitational waves will make it easier to confirm exoplanets already identified by other methods.” According to Aguiar, the LISA observatory will only be able to detect exoplanets that are a few light-years away from Earth and therefore outside the region of irresolvable galactic binaries. Lima and his colleagues are aware of this problem, but are more optimistic about the potential of gravitational waves in the discovery of certain types of exoplanets.