Profile of the seabed off the southeast coast of Brazil, measured using a depth sonar; the depressions are the craters that produce methane

Two research groups—one from São Paulo and the other from Rio Grande do Sul—have identified nearly 2,000 craters on the sea floor approximately 200 kilometers (km) off the south and southeast coast of Brazil. Reaching up to 230 meters (m) in diameter and 90 m deep, the holes on the seabed, known as pockmarks, are formed by the expulsion of gas, primarily methane (CH4), one of the main greenhouse gases. It is estimated that most of the methane, however, is consumed by bacteria and other ocean organisms before reaching the atmosphere.

There is not yet any data on how much the Brazilian coastal craters contribute to the country’s total greenhouse gas emissions, which stood at approximately 2 billion tons in 2014, representing approximately 5% of the global total, according to the Brazilian Ministry of Science, Technology, Innovation, and Communications (MCTIC). Produced mainly by livestock and waste treatment processes, methane accounts for 24% of global net emissions (the volume of gas remaining in the atmosphere after subtracting the carbon removed by human interventions such as reforestation). Carbon dioxide (CO2), which results primarily from the burning of fossil fuels, accounts for 64% of net emissions, and nitrous oxide (N2O) from soil fertilization represents 12%. Methane remains in the atmosphere for much less time than CO2, but its capacity to retain heat is 21 times greater; N2O, in contrast, holds 310 times more heat than CO2. 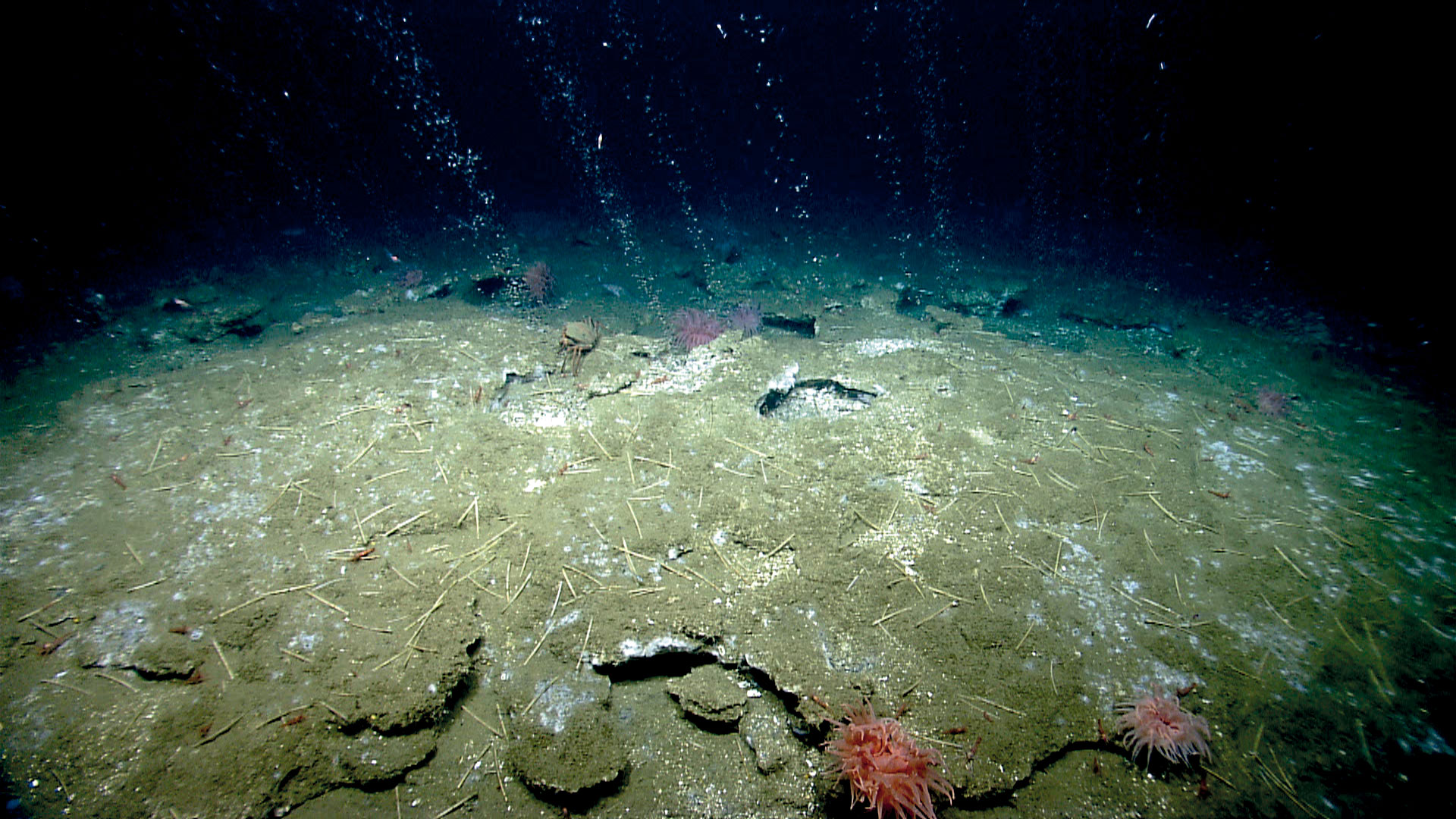 Methane bubbles rise from sediment on the seabed off the coast of Virginia, USA, providing sustenance to anemones, worms, and microorganismsNOAA

According to estimates published in Nature Geoscience by the Max Planck Institute of Marine Microbiology and the Center for Marine Environmental Sciences (MARUM) at the University of Bremen, both in Germany, methane produced at the bottom of the ocean by decomposing organic material, especially in these craters, probably contributes to between 1% and 5% of global methane emissions to the atmosphere. “Recent studies suggest that methane produced at depths greater than 100 m barely reaches the surface of the sea,” says geologist Anthony Rathburn, a professor at California State University, USA. “The dissolved methane is often oxidized, forming CO2, by microorganisms in the water column.” The resulting CO2 is consumed by marine organisms before it can reach the atmosphere.

These types of underwater craters are economically valuable because they can indicate the presence of natural gas reservoirs. In 2011 and 2013, researchers from the Pontifical Catholic University of Rio Grande do Sul (PUC-RS) and Petrobras mapped approximately 1,000 underwater craters off the coast of Rio Grande do Sul and used them to identify hydrocarbon reserves in the Pelotas basin, a 250 km2 area in the south of Rio Grande do Sul state. “Based on the initial studies, we believe this area has very large reserves of natural gas that could be exploited in the future,” says chemist Luiz Frederico Rodrigues, a researcher at the Institute for Petroleum and Natural Resources at PUC-RS. The sediment in this area contains carbohydrates—crystalline solids formed of water and gases—that preserve large volumes of methane, as described in an article published in Revista Brasileira de Geofísica (Brazilian journal of geophysics) in September 2017. 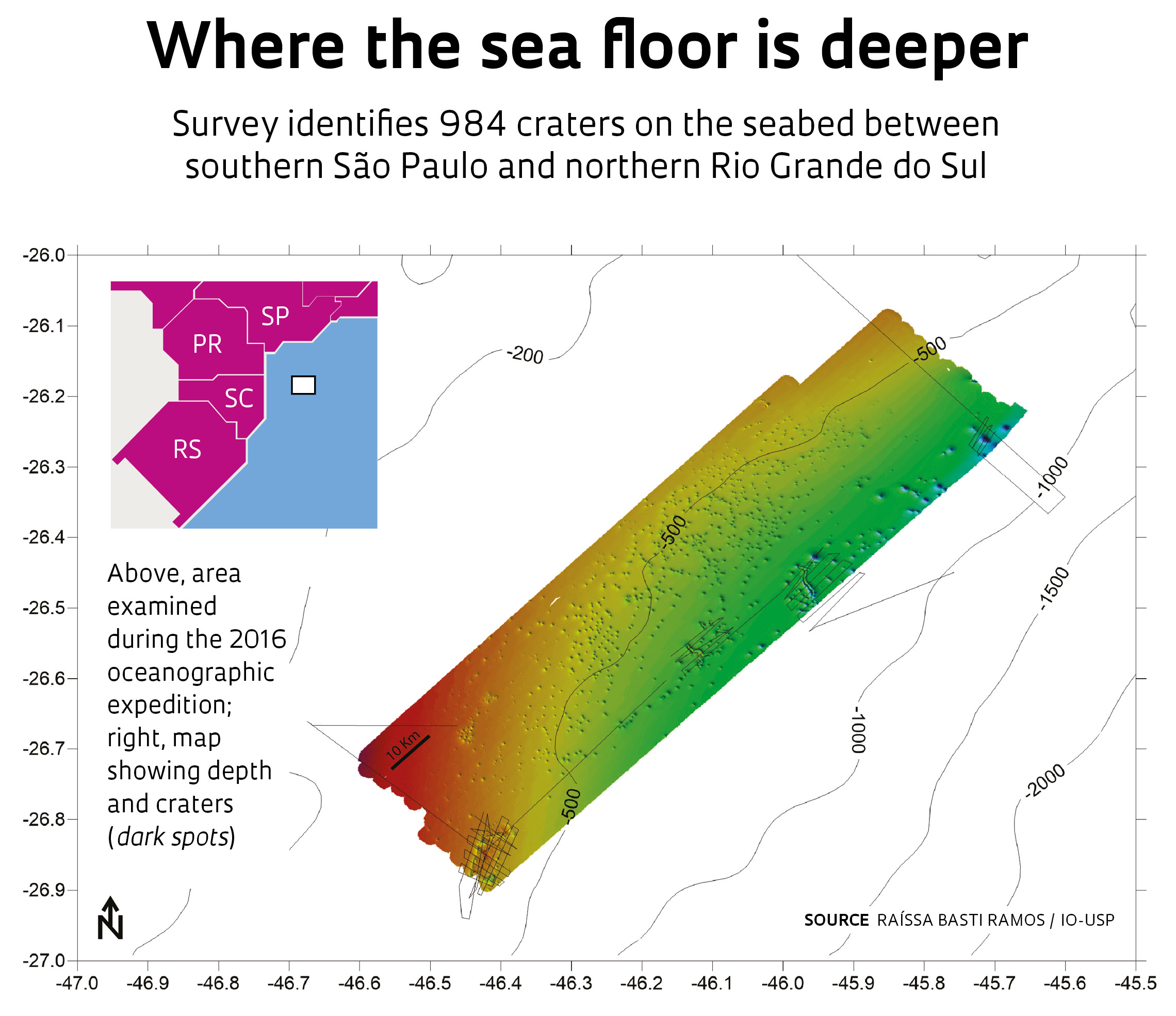 In 2016, a team from the Oceanographic Institute at the University of São Paulo (IO-USP) identified 984 craters in an area 130 km long by 30 km wide off the south coast of São Paulo to the north of Rio Grande do Sul. According to a study published in the Journal of Geochemical Exploration in September, some of the craters are still emitting methane. “It is difficult to know which ones are releasing gas and which ones have already stopped. The only way to find out would be by using a methane sensor, which we don’t currently have,” says geologist Michel Mahiques, a professor at IO-USP and coordinator of the expedition on the Alpha Crucis that enabled the team to identify the craters. The formations are distributed at marine depths of 300 to 700 m. “In December 2017, we carried out new surveys in the area and discovered even larger pockmarks in deeper regions,” he says.

“Methane was released into the ocean at greater rates in the past, especially during the ice age, when the sea level dropped by about 120 m and the water pressure on seafloor gas reservoirs was lower,” says Brazilian biologist Rodrigo Portilho-Ramos, currently a researcher at MARUM in Bremen. In a study conducted at Fluminense Federal University and USP in collaboration with Rathburn and other specialists from Germany and the US, Portilho-Ramos found that fossilized shells collected from a crater at a depth of 475 m off the coast of Florianópolis, Santa Catarina state, had lower carbon levels than samples taken from surrounding areas. The varying carbon contents are the result of an intense but not-yet-quantified release of methane between 40,000 and 20,000 years ago—about the time of the last ice age—according to an article published in Scientific Reports in April 2018.

The craters off the São Paulo coast and others near the Abrolhos reefs between the states of Bahia and Espírito Santo were first discovered separately in 2007 by researchers from the Federal University of Rio Grande and were initially believed to be remnants of caves. In 2016, the USP group conducted a comprehensive survey, finding that the craters are abundant and some release methane. However, it is not yet known how many there are off the Brazilian coast and how many are emitting methane. “The Brazilian sea floor has not been mapped in detail by research institutions. Although oil companies and their service providers have a lot of information, they rarely release it for public use because it could contain information on oil and natural gas reserves,” says Mahiques.

The gas released off the southeast coast is caused mainly by rising salt columns beneath the seabed, according to a study published by the USP researchers in the scientific journal Heliyon in February 2017. Because of the intense pressure to which they are subjected, these columns of salt—known as diapirs—break the overlying rocks of the sea floor, which then sink, forming a crater. This process leads to the release of methane trapped in the remains of dead animals and plants that accumulate on the seabed. 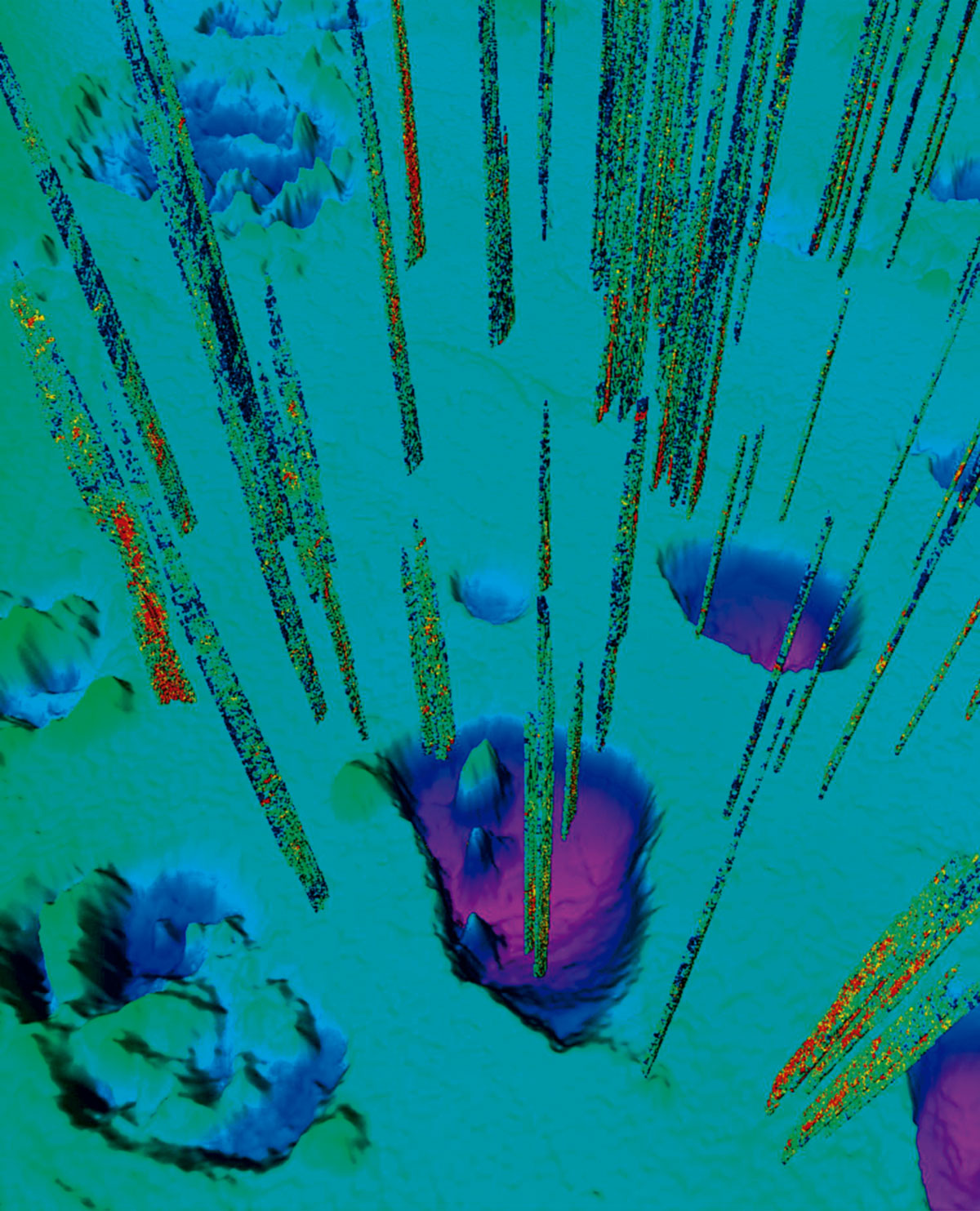 Biological richness
These craters form unique environments where communities of microorganisms, mollusks, and other invertebrates are more diverse and abundant than in neighboring regions. In an article published in the journal Limnology and Oceanography in October 2007, researchers from Norway and the US found that in one area of the Arctic Ocean, at 1,200 m deep, there were 2.5 times as many species in methane-rich areas than in surrounding regions. In these areas, the authors of the paper noted that life is sustained by methane, not sunlight, which cannot reach the deep sea.

In her laboratory at IO-USP, biologist Vivian Pellizari grows bacteria and other microorganisms that produce methane during the degradation of organic matter on the sea floor, an environment devoid of oxygen. “The challenge now is to keep these cultivations viable until the microorganisms are isolated,” says Vivian, who wants to discover the diversity of microorganisms on the seabed that produce and consume methane. She is on the scientific committee of the São Paulo School of Advanced Methane Science, a conference to be held in Ilhabela, on the coast of São Paulo state, in October, whose purpose is to discuss the origins and transformations of methane in sea and land environments.

The first underwater craters of this type were discovered off the coast of Nova Scotia in Canada in the late 1960s by a team from the Bedford Institute of Oceanography. Detected by what was a new sonar system at the time, the craters in Nova Scotia were 150 m wide and 10 m deep. They were soon identified all over the world. In 2013, researchers from New Zealand, Germany, and the US discovered the largest underwater craters ever found, 500 km east of Christchurch, New Zealand. The largest craters in this region were 11 km in diameter and 100 m deep, approximately 1 km from the sea surface. They were likely created by gases erupting through the sediments, but they do not seem to have released higher levels of methane than other, smaller craters.