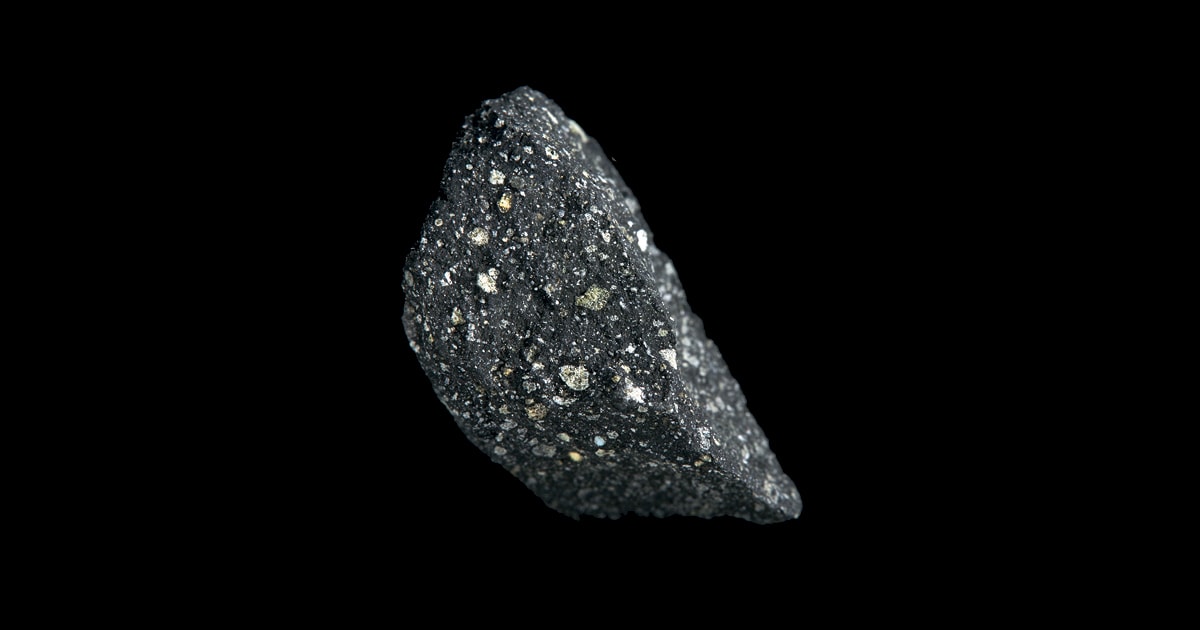 Fragment of the Murchison meteorite

At around 11 a.m. on Sunday, September 28, 1969, a ball of fire crossed the sky in southern Australia. A rock from space had exploded upon entering our atmosphere, creating a boom that was heard seconds later. A shower of small rocks fell near the village of Murchison, 160 kilometers north of Melbourne, the state capital of Victoria. Nearly 100 kilograms of meteorite fragments were later recovered and distributed among museums in the United States and Australia, and they have been studied for the last five decades. Scientists are interested in the origin and composition of objects like the Murchison meteorite because they can help to reveal more about the cloud of gas and dust that gave rise to our Sun and its planets.

The most recent study of samples from Murchison revealed that the meteorite contains grains of stardust formed up to 7.5 billion years ago, long before our solar system existed—the grains are thus described as presolar. “These are the oldest solid materials ever found on Earth,” said American geochemist Philipp Heck, a researcher at the Field Museum and the University of Chicago and lead author of the article that described the results, published in the journal Proceedings of the National Academy of Sciences (PNAS) on December 13.

Heck led an international group that included Brazilian geochemist Janaína Nunes Ávila, from the Australian National University (ANU), which used a range of techniques to investigate the structure, age, and origin of 40 presolar stardust grains taken from the Murchison meteorite. Some had already been analyzed with less precise techniques, dating them as older than the solar system, but not as old as is now known.

Invisible to the naked eye, these presolar grains are extremely rare. They were formed by chemical elements in the layers of dust that surround certain stars at the end of their life. Over many years, these elements come together to form tiny grains, which end up being incorporated into the structure of asteroids like the one that the Murchison meteorite came from. “Every grain is essentially a tiny frozen piece of a star that died before our solar system was formed,” says Ávila. Her work determined that the stardust came from red giants—a type of star that is older and brighter than the Sun.

To extract the grains, the researchers crush a small shaving of the meteorite into a very fine powder. They then use acids to dissolve the most soluble organic and inorganic compounds. What remains are extremely hard grains—those studied were made of silicon carbide (SiC).

The Murchison meteorite is one of a class known as carbonaceous chondrites, rich in organic compounds and largely unaffected by heat during formation. “Carbonaceous chondrites have never reached temperatures above 200 degrees Celsius,” explains astronomer Maria Elizabeth Zucolotto, curator of the meteorite section of the Brazilian National Museum in Rio de Janeiro. “For this reason, their chemical composition has not changed much, and they serve as a kind of fossil record of the time and region in which they were formed.” When handled, they release a characteristic odor, which according to some, smells like a combination of asphalt and mangrove mud.

To estimate the age of the silicon carbide grains, the researchers measured the concentration of two chemical elements trapped within their structure: helium (He) and neon (Ne). The group specifically analyzed two varieties (isotopes) of these elements that are rare on Earth: He-3, the nucleus of which contains two positively charged particles (protons) and one neutral particle (neutron), and Ne-21, which has 10 protons and 11 neutrons. These isotopes are produced in space as the result of interactions between cosmic rays (high-energy particles that travel at close to the speed of light) and other chemical elements. The concentration of He-3 and Ne-21 in the grains is proportional to the amount of time they were exposed to cosmic rays, allowing the researcher to calculate when the grains formed.

According to Heck, the existence of more grains aged between 4.6 billion and 4.9 billion years old suggests that there was a surge in star formation in the Milky Way around 7 billion years ago. A greater number of stars were born, rapidly evolved, and then died 2 billion years later, emitting the elements that form these grains into space. “There was a time, before the beginning of our solar system, when more stars formed than normal,” he explained. “Thanks to these grains, we now have direct evidence that there was a period of increased star formation in our galaxy.” The Murchison meteorite, and others, could harbor even older grains that have not yet been found.