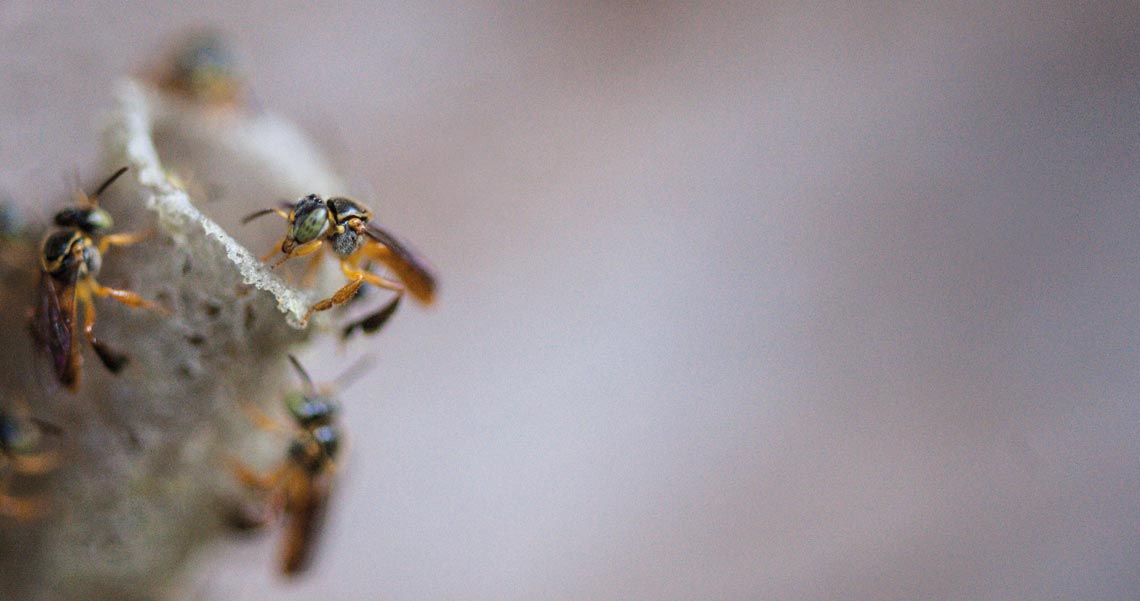 After a severe bee die-off in the early 2000s, possibly caused by the overuse of field insecticides, the Brazilian Institute of the Environment and Renewable Natural Resources (IBAMA) invited biologists Osmar Malaspina, from São Paulo State University (UNESP) in Rio Claro, and Roberta Nocelli, from the Federal University of São Carlos (UFSCar), to do in-depth studies on the bees’ condition in Brazil. In 2017, the government approved a law stating that agrochemicals to be marketed in Brazil must undergo risk assessment tests on Apis mellifera bees, a species adopted internationally for this type of testing because they live almost everywhere in the world. However, the high mortality rate continued. From December 2018 through February 2019, 400 million Apis deaths were recorded in the state of Rio Grande do Sul, while the states of Santa Catarina, Mato Grosso do Sul, and São Paulo recorded 50 million, 45 million, and 5 million respectively. The insecticides used to kill crop pests are one of the causes of reduced bee populations around the world, along with declining forest area and climate change.

The working group created by IBAMA to assess the risk of pesticides concluded that it was necessary to include stingless bees, which are representative of the approximately 350 species unique to Brazil. “We have to create toxicity analysis methodologies for native bees in order to avoid testing only with Apis bees, before launching a new product,” emphasizes Malaspina, coordinator of the research lab for studying ecotoxicology in social bees at the UNESP Institute of Biosciences in Rio Claro. “We suggest that the methods adopted for evaluating toxicity during the immature stage of Apis bees cannot be applied to assess risks in stingless bees,” says biologist Annelise Rosa-Fontana, a postdoctoral researcher at UNESP in Rio Claro.

In 2015, in an experiment for her doctorate at the University of São Paulo (USP) in Ribeirão Preto, she placed different doses of an insecticide widely used in agriculture, thiamethoxam, in the larval food of a species of native stingless bee, the straw-bee (Scaptotrigona depilis). Only 40% of the larvae treated with the highest dose of insecticide survived, whereas in the control group, which didn’t receive the insecticide, 80% survived, as detailed in an article published in 2016 in the journal Apidologie.

In 2018, she participated in a study at UNESP conducted by biologist Adna Dorigo, which evaluated the effect of dimethoate, used as an international reference in toxicity tests, on the northeastern uruçu bee (Melipona scutellaris). In this study, published in March 2019 in the journal PLOS One, the lethal concentration required to kill 50% of a population of uruçu larvae was 320 times lower than with the Apis larvae. In more recent studies, still in their preliminary stages, larvae of another stingless bee species, the mandaguari (Scaptotrigona postica), died off with a lethal concentration even lower than used with the uruçu.

Changes in behavior
At the Luiz de Queiroz College of Agriculture of the University of São Paulo (ESALQ-USP), biologist Cynthia Jacob reinforced the conclusions about the effects of agricultural pesticides on stingless bees by verifying that thiamethoxam and three other insecticides of the neonicotinoid group can cause behavioral changes in adult jataí bees (Tetragonisca angustula). These include reductions in flight speed and travel distance, according to a study published in February in the journal Chemosphere.

Apis predominate as honey producers and are essential as pollinators of oranges, soy, canola, and cotton, among other agricultural crops, while the stingless bees facilitate the productivity of coffee, strawberry, apple, peach, tomato, and eggplant crops. The report “Pollination, pollinators, and food production,” organized by the Brazilian Platform for Biodiversity and Ecosystem Services (BPBES) with the Brazilian Network of Plant-Pollinator Interactions (REBIPP) and presented in February 2019, estimated the value of services provided by pollinators in Brazil at R$43 billion. According to their report, bees perform 66% of this pollination work, together with beetles, butterflies, moths, birds, and bats.

Stingless bees—which actually have atrophied stingers—are active in virtually all of Central and South America, Africa, Southeast Asia, and northern Australia. “They live in forests close to plantations, like Apis, but they’re less numerous and visible, and cover smaller areas; however they do enter into agricultural fields,” notes Malaspina. Faced with the risk of a steady decline in bee populations, he argues: “Since agrochemicals are still indispensable for maintaining agricultural crop sizes, manufacturers of pesticides and agricultural producers should invest in less toxic agrochemicals or in more selective biological products.”

“If used properly, through aerial applications by certified companies, agricultural pesticides have no impact on bees,” says lawyer Renata Camargo, sustainability coordinator of the Brazilian Sugarcane Industry Association (UNICA), which represents 120 sugar and alcohol producing refineries. In June 2017, UNICA and the Sugarcane Planters Organization of the South-Central Region of Brazil (ORPLANA) signed an agreement with the São Paulo State Government, the Greener Ethanol Protocol, to promote good practices in the use of agrochemicals and the protection of native vegetation, among other objectives.