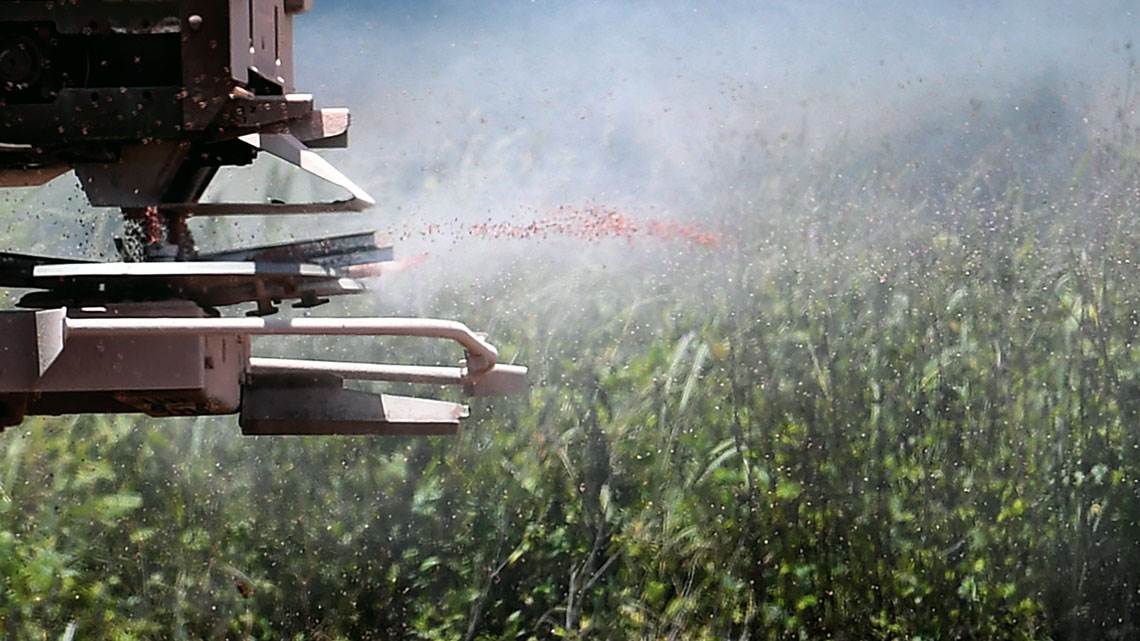 Agricultural machine sprays fertilizer on a soybean field in Goiás

Brazil’s Ministry of Agriculture, Livestock, and Food Supply released a new version of its National Fertilizer Plan (PNF) in March, with the aim of reducing the country’s dependence on imported raw materials for chemical fertilizer production. The goals are aggressive: to reduce imports from the current 85% to 60% by 2030 and 45% by 2050. One of the plan’s strategies is to teach rural producers how to use these products more efficiently and how to sustainably manage the soil. With this objective in mind, the Brazilian Agricultural Research Corporation (EMBRAPA) started the FertBrasil Caravan in May, which will visit 48 agricultural centers across the country to show technicians and farmers how to take advantage of lesser-used fertilizer sources, such as biomass, and how to reduce losses during application. The aim is to increase efficiency in the use of fertilizers. “This should allow rural producers to save money by spending less on these inputs,” says José Carlos Polidoro, an agronomist from EMBRAPA Soils in Rio de Janeiro.

Improving management is important, but it is not enough alone. “We also need to implement policies that encourage domestic manufacturing based on technologies that we have already mastered,” says Caue Ribeiro, a materials engineer from EMBRAPA Instrumentation in São Carlos.

There are currently about 20 industrial projects on hold in Brazil that are intended to produce nitrogen (N), phosphate (P), and potassium (K) fertilizers—three elements essential for plant growth. These chemical elements are used in different proportions depending on the crop type and soil characteristics.

One of these industrial projects is a nitrogen fertilizer plant that Petrobras started building in Três Lagoas, Mato Grosso do Sul, in 2011, works on which were only resumed this year. “There are also projects planned for the production of phosphate fertilizers in São Paulo, Minas Gerais, and Rio Grande do Sul, and for potassium fertilizers in the Amazon, all facing restrictions linked to the environment or feasibility,” explains Polidoro.

Brazil is the third largest food producer in the world, second only to China and India. In 2019, Brazilian agriculture produced 1.08 billion tons of cereals, vegetables, fruits, oilseeds, roots, and tubers, accounting for 11% of global production, according to data from the United Nations Food and Agriculture Organization (FAO) presented in the World Food and Agriculture Statistical Yearbook 2021. This production requires the use of large amounts of chemical fertilizer, making the country the fourth largest consumer of these inputs in total volume. According to the yearbook, Brazil used 16.5 million tons in 2019, compared to 19.9 million in the United States, 29.9 million in India, and 47.5 million in China.

Reliance on imported raw materials has more than quadrupled in the last two decades, an issue that has become more evident since Russia invaded Ukraine. This dependence on external sources leaves national agriculture vulnerable to price increases set by the few countries responsible for global supply—these increases occur both due to the increase in demand over recent years and the geopolitical landscape, such as the war in Ukraine. Russia is the biggest producer of the global fertilizer market’s main commodity: NPK granulate, the most used in Brazil. “Roughly 22% of fertilizers imported by Brazil come from Russia,” says Paulo César Teixeira, an agronomist from EMBRAPA Soils. “The Brazilian government has been looking for other suppliers and apparently expects no shortages in the short term.”

The reliance on foreign sources for almost all fertilizer used in the country is in part caused by policies adopted over the last three decades. Domestic production, started in the 1970s, was state-owned before being privatized in the 1990s. Producers then began to face economic and structural difficulties, such as high logistical costs and problems extracting and processing Brazilian raw materials due to the country’s geophysical characteristics. “Companies chose to start producing abroad instead and then importing into Brazil, which was facilitated by a 1997 exemption from state and federal import taxes,” says Polidoro. These exemptions continued until 2021.

“Because of the high costs of building factories, the impacts on the environment, and the logistics involved, fertilizers were never attractive commodities for private producers,” says agronomist José Oswaldo Siqueira, professor emeritus at the Federal University of Lavras (UFLA) and former scientific director of the Vale Institute of Technology (ITV). Due to these market characteristics and the increase in national agricultural production, fertilizer imports, which were at 20% at the end of the 1990s, have since grown at a rate of 6% to 8% a year, increasing the deficit.

There is room, however, to improve and reduce the use of chemical fertilizers. Brazil currently uses a high concentration by area, at an average of 304 kilograms per hectare (kg/ha), lower only than China (393 kg/ha) and more than twice the world average (137 kg/ha).

Experts told Pesquisa FAPESP that in addition to hopefully resuming domestic production, the country needs to manufacture more efficient fertilizers with less nutrient loss and better use by plants.

A little over a decade ago, with funding from FAPESP and federal funding agencies, Ribeiro from EMBRAPA and colleagues from the University of São Paulo (USP) in São Carlos developed a nanostructured material based on clay and urea that slowly releases nitrogen, decreasing loss by volatilization to the atmosphere, one of the main factors lowering the efficiency of nitrogen fertilizers. The granule production process, described in the Journal of Agricultural and Food Chemistry in 2012, has been patented by EMBRAPA. The new slow-release fertilizer was tested on forage grass in a greenhouse and in the field, proving more efficient than common fertilizers and another commercially available slow-release version, according to the results published in the journal ACS Sustainable Chemistry and Engineering in 2017. “The emission of volatilized gases into the atmosphere was reduced by up to 90%,” reports Ribeiro.

Polidoro believes it would be possible to increase autonomy by adopting good practices in fertilization management and using biological inputs and residues with potential for agricultural use, as well as other products, such as organomineral fertilizers (combinations of NPK with organic sources).

Introducing selected microorganisms (bacteria or fungi) into the seeds of certain grains can also reduce the need for nitrogen fertilization. Research started in Brazil in the 1960s by agronomist Johanna Döbereiner (1924–2000), born in former Czechoslovakia, showed that bacteria of the genus Rhizobium, which live in the soil, transform nitrogen in the atmosphere into nutrients for legumes such as soybeans. This process generates savings of US$2 billion per year for Brazilian producers.

Currently, selected bacteria and fungi can be sowed together with the seeds, promoting nitrogen fixation and increasing its availability to the plants. “Other inoculants, such as the bacteria Azospirillum brasiliense, have been tested for biological nitrogen fixation in corn and EMBRAPA has already developed solutions to increase the availability of phosphorus to other crops,” says Ribeiro.

In another approach, the Geological Survey of Brazil (SGB) has been mapping rocks of potential agricultural interest in São Paulo and other Brazilian states that contain phosphorus, potassium, and macro and micronutrients. These rocks can be crushed into a fine powder, which is then deposited in the ground. “This strategy has been consistently used by private landowners in the country,” says agronomist Ruy Caldas, a collaborating researcher at USP’s Luiz de Queiroz College of Agriculture (ESALQ). In June, the SGB and ESALQ signed an agreement to jointly investigate the effectiveness of this strategy. According to Caldas, it could have a major impact on the sugar and alcohol sector.