The 2017 edition of the Innovation Survey (PINTEC), released April 16 by the Brazilian Institute of Geography and Statistics (IBGE), revealed a decline in innovation effort among Brazilian firms driven primarily by the mid-decade contraction of the economy. Out of 116,962 Brazilian private and public firms in the manufacturing, services, and utility sectors, 33.6% reported having engaged in some form of product or process innovation between 2015 and 2017. This percentage, referred to as the overall innovation rate, is 2.4 percentage points below the 36% reported for the period 2012–2014. It is also lower than the 35.7% for 2009–2011, and 38.6% for 2006–2008. The three-yearly PINTEC survey is the go-to source for information on innovation performance in Brazil’s economy. Data from the survey is used in academic and industry research, and to inform public policy. 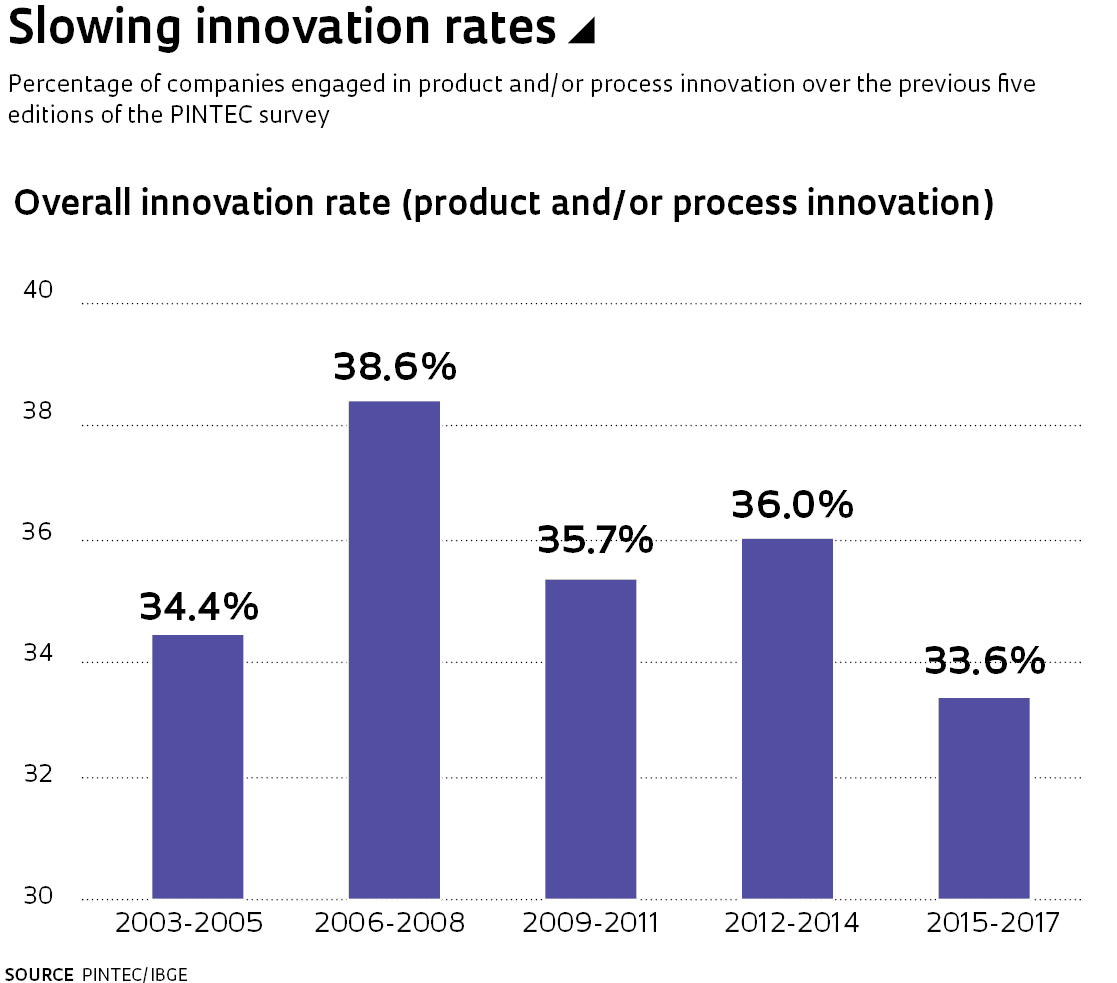 The percentage of companies receiving government funding for innovation also fell from 39.9% in the previous survey to 26.2% in the current one. This edition of PINTEC undoubtedly reflects the severe economic crisis that coincided with the survey period—Brazil’s Gross Domestic Product (GDP) fell by 3.8% in 2015 and by 3.6% in 2016, before recovering by 1% in 2017. “Companies tend to invest less in research and development [R&D] when the economy is contracting, although they should really do the opposite so they remain competitive and are able to regain the ground they have lost,” says chemical engineer Pedro Wongtschowski, chairman of the board at Ultrapar Participações and head of the National Confederation of Industry’s (CNI) Mobilization for Business Innovation (MEI) initiative. “Unfortunately, innovation has not been structurally ingrained in Brazilian firms and remains highly dependent on the circumstances,” says Wongtschowski, who is also a member of the FAPESP Board of Trustees. 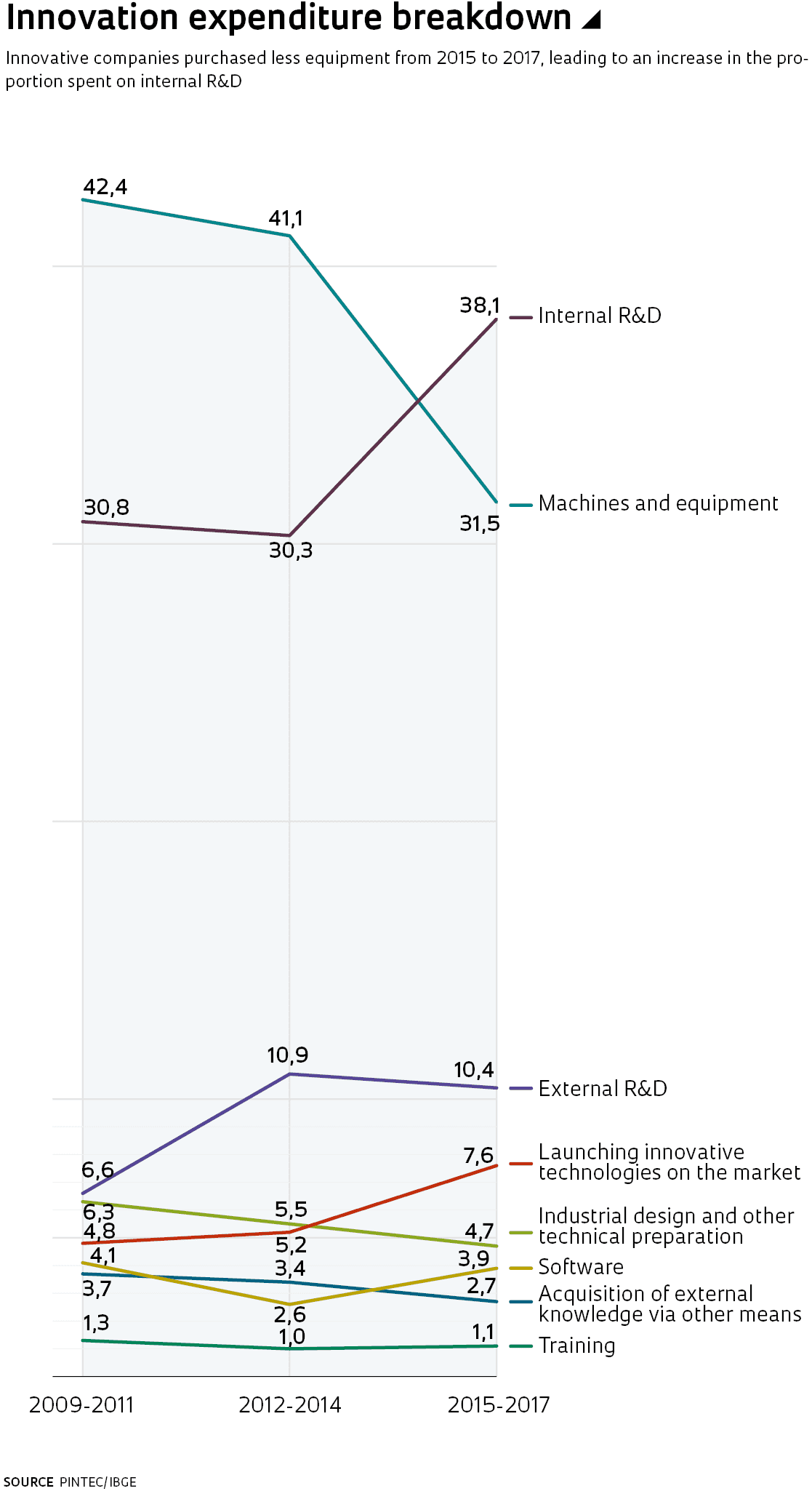 The decline was greatest in process innovation—or innovation aiming to reduce costs and complexity in production. The percentage of companies engaged only in process innovation dropped from 17.5% in 2014 to 14.8% in 2017, while those engaged only in product innovation grew from 3.9% to 5.1%. The contingent of companies engaged in both product and process innovation shrank from 14.6% to 13.7% from one survey to the next. Process innovation is typically achieved by purchasing new equipment, a strategy that saw reduced investment between 2014 and 2017. According to the survey, equipment finance—an important form of government support for innovation—benefited 29.9% of innovative companies in the period 2012–2014, compared to just 12.9% between 2015 and 2017. In manufacturing, equipment finance was used by 14.1% of survey respondents, down from 31.4% in the previous three-year period. “Notably, equipment finance from BNDES [the Brazilian Development Bank], Brazil’s leading provider of these types of loans, fell substantially in 2017 to the levels seen in 2005. BNDES disbursements specifically were 30.7% in real terms of what they were in 2014,” says economist André Tosi Furtado, a professor in the Department of Science & Technology Policy at the Institute of Geosciences of the University of Campinas (IG-UNICAMP). Economist João Carlos Ferraz, a researcher at the Institute of Economics of the Federal University of Rio de Janeiro (IE-UFRJ), points to another worrying correlation in the PINTEC survey. Expenditure on new machinery and equipment to implement new or upgraded products or processes fell from 0.85% of net revenue in 2014 to 0.51% in 2017, a decrease of 40%. “Over the same period, gross fixed capital formation, or investment to increase production capacity in the economy, dropped by nearly 30%.”

There was a sharp drop in the number of people engaged in internal R&D. In 2014 there were 52,905 researchers and 20,560 research technicians working at manufacturing, services, and utilities companies, a contingent that decreased to 41,036 researchers and 17,396 technicians in 2017. “The decline is quite significant, and most prominent in manufacturing,” says André Furtado. “In the automotive industry, for example, the number of people engaged in R&D was halved. This reflects a marked deindustrialization trend.”

When analyzing the PINTEC data on a sector basis, Furtado found several distinctive patterns. “When you look at R&D intensity in manufacturing, the decline is mildest in export-intensive industries such as agribusiness, mining, and food and beverages. But a very substantial drop in R&D investment is seen in the electrical and electronic equipment and machinery industries, as well as in the oil and gas industry, reflecting reduced investment by state-run Petrobras,” he says. Industries such as aerospace and transportation equipment performed better. “This clearly reflects investment through public technology procurement,” says Furtado, referring, for example, to the KC-390 military transport jet developed by Embraer for the Brazilian Air Force. The government, he says, apparently attempted to offset the reduced innovation investment through industry-specific programs, despite the shortage of credit for equipment finance. 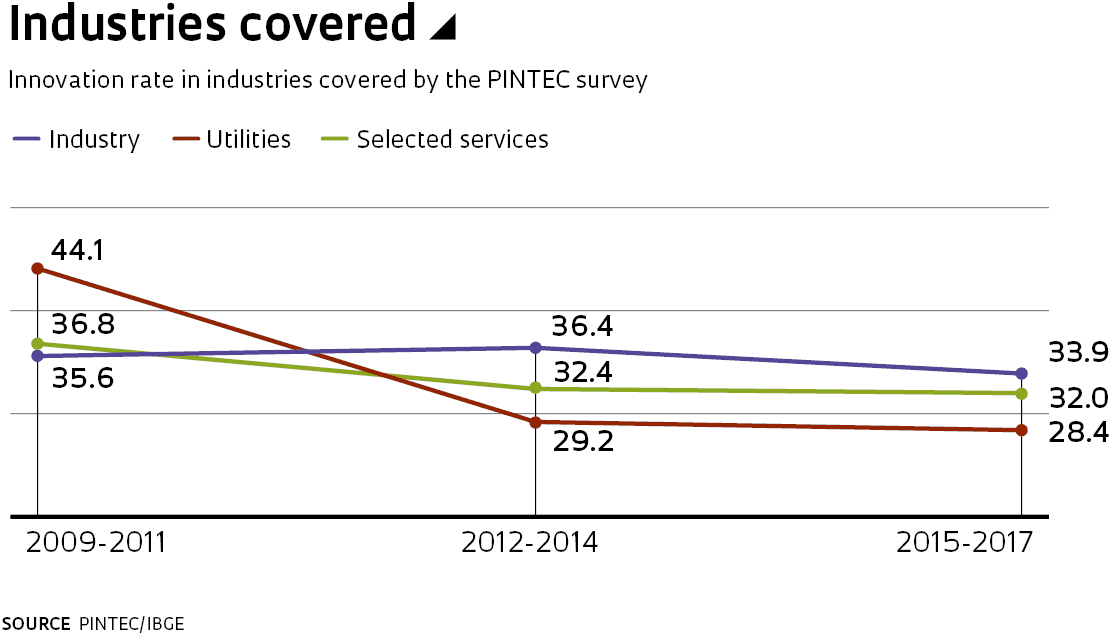 Ferraz, of UFRJ, notes an intriguing finding from the survey: business expenditure on internal R&D—the more creative component of firms’ innovation efforts—has remained relatively flat. In 2017, internal R&D expenditure represented 0.74% of firms’ net revenue, only slightly down on the 0.77% in the 2014 survey. “While this level is low, it has remained relatively steady through economic cycles for at least 20 years, evidencing a resistance to both upside and downside change among companies, especially in manufacturing,” he says. This ossification creates challenges for policymakers, who have struggled to bring about change.

The slower rates of innovation were expected from the economic contraction, but were compounded by other factors, says economist Fernanda de Negri, who heads the Center for Research on Science, Technology, and Society at the Institute for Applied Economic Research (IPEA). One was Petrobras’s drastic R&D spending cuts. “Petrobras accounted for 10% of total R&D investment in Brazil in 2014, but reduced spending by almost half between 2014 and 2017,” she says. Another compounding factor was the curtailment of public funding for innovation. According to an IPEA statement about the PINTEC survey results, innovation funding from the Brazilian Funding Authority for Studies and Projects (FINEP) and BNDES fell from R$8 billion in 2014 to R$4.3 billion in 2017. “In turn, grant funding for innovation projects, one of the primary funding mechanisms available from FINEP and one of the best suited for high-risk innovation, virtually vanished in 2017,” says Negri. The one exception was the “Lei do Bem,” a set of tax incentives for R&D to boost innovation, which benefited 4.7% of companies compared to 3.5% in the previous survey. “But even Lei do Bem incentives were underutilized due to uncertainty about whether the program would continue.” 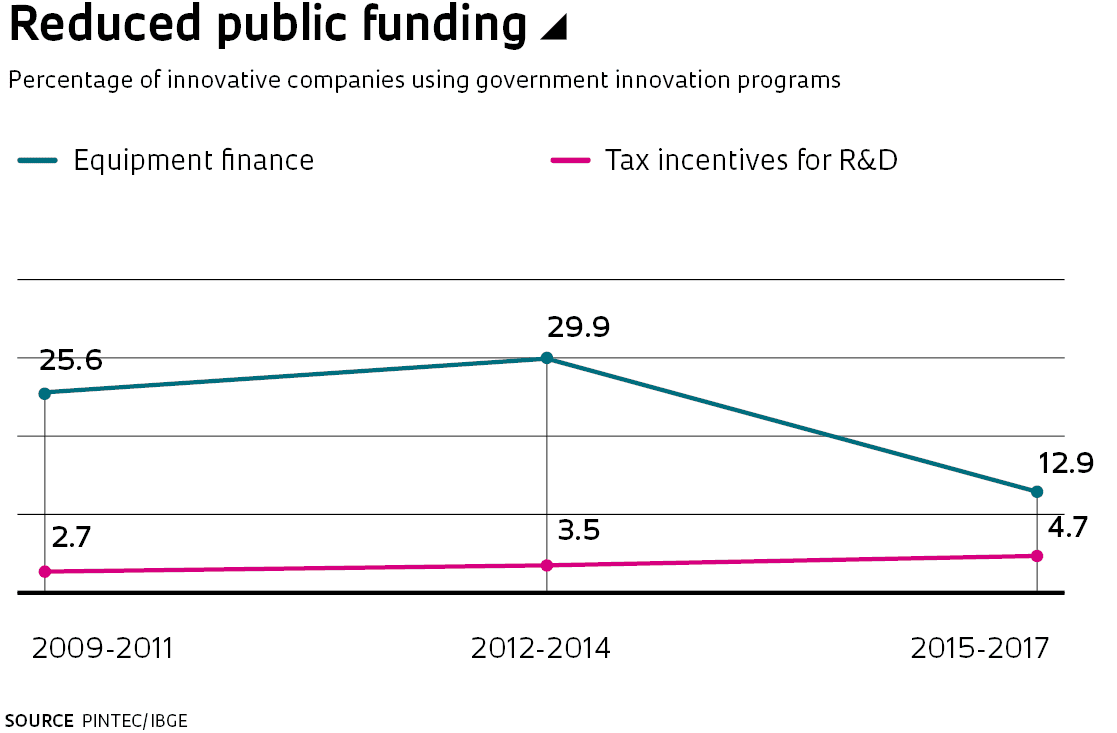 In the 2014 edition of the survey, says Negri, a downside trend was already observable, but was offset by strong performance in the telecommunications industry. “We identified that the surge in investments by telecommunications carriers was largely connected to the organization of major events such as the World Cup,” she explains. This strong performance did not continue into 2015–2017, although Negri believes it could have. “If the 5G regulations had not been delayed, higher innovation investment would have been needed to implement the new technology.”

Pedro Wongtschowski also notes the unfavorable landscape for small and medium-sized innovation enterprises as revealed by the survey. When it comes to innovation investment, companies can be divided into two major categories, he says: large ones with many employees, which account for the bulk of innovation expenditure, and technology-based startups, which are often not covered by the IBGE survey because they fail to meet the minimum threshold of 10 employees. “Small and medium-sized businesses represent the biggest funding gap,” says Wongtschowski. “Access to funding mechanisms is more difficult due to tax and financial guarantee requirements that small businesses are often unable to meet.” He stresses the importance of creating new mechanisms to fund innovation research in these types of companies, as FAPESP has done with its Research for Innovation in Small Businesses (RISB, or PIPE in the Portuguese acronym) program. “The current state of innovation underscores the value of FAPESP’s program model,” he says.