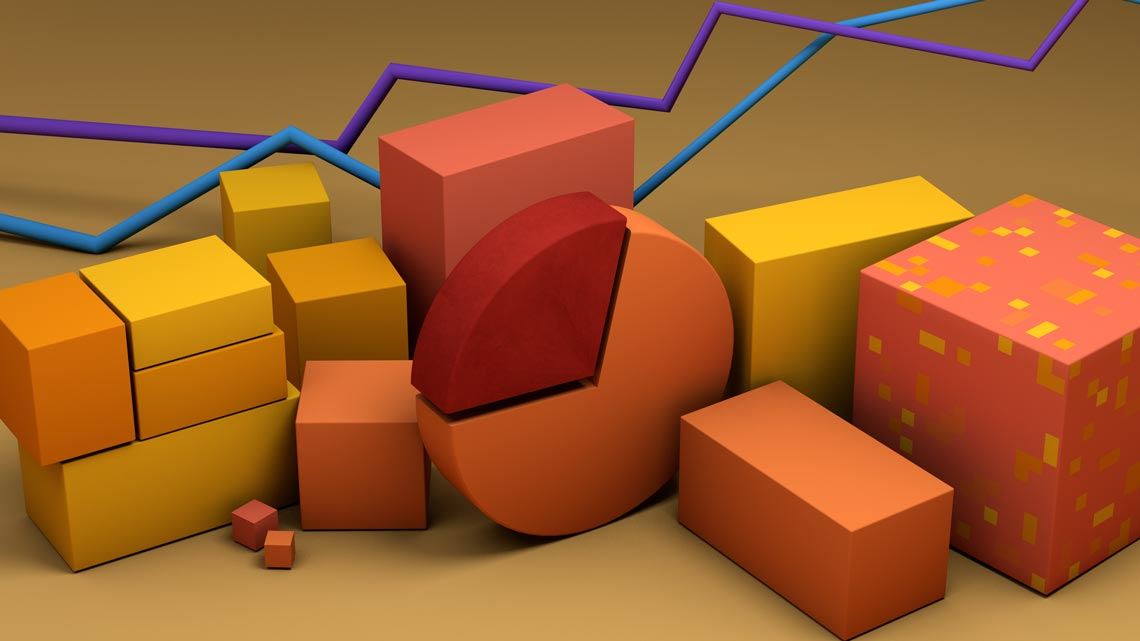 FAPESP’s total annual research expenditure was R$1,257,288,187 in 2019, an increase in nominal terms from R$1,216,750,480 in 2018.  Excluding inflation for the period, research expenditure was on a level with the previous year. A total of 24,806 projects, including research grants and fellowships, were funded in the year, slightly more than the 24,720 projects funded in 2018. Projects were selected by 9,324 advisors who issued 23,491 opinions—on average, researchers received an initial response to their applications within 69 days. In all, 20,310 project proposals were submitted to the Foundation in 2019, and 10,443 were accepted. These were some of the figures reported in FAPESP’s Activities Report 2019, released in August. The complete report is available at fapesp.br/publicacoes, along with summary annual reports going back to the Foundation’s founding year, 1962. “Despite the instability in Brazil’s research funding environment in the year, FAPESP expanded its strategic programs in 2019 as it continued to support the scientific community,” said FAPESP President Marco Antonio Zago during a presentation of the report.

The Foundation’s budget for scientific and technological development is funded by 1% of tax revenue in the state of São Paulo—an allocation made under the state’s constitution of 1989—and by revenue earned under research collaboration agreements with other institutions and companies. In 2019, FAPESP received R$1.35 billion in budget allocations from the state treasury and R$102 million in other revenue. Half of its expenditure went to research for the advancement of knowledge, a funding category that supports long-term basic and applied research through Thematic Projects, Research, Innovation, and Dissemination Centers (RIDC), Junior Researcher programs, the São Paulo Excellence Chair (SPEC), and Special Programs, as well as short-term research through regular research grants. The other half was allocated to training (24% of the total), research infrastructure (9.5%), innovation research (9%), strategic research (6%), and science outreach (1.5%). By field of knowledge, R$594.5 million was allocated to life sciences, R$413.2 million to exact sciences, Earth sciences, and engineering, R$126 million to interdisciplinary research, and R$123.3 million to the humanities and social sciences.

Research activity in collaboration with industry and universities was among the highlights of the report. FAPESP spent R$18.2 million in 2019 toward funding Engineering Research Centers and Applied Research Centers (CPEs/CPAs) in partnership with companies such as pharmaceutical manufacturer GSK, oil company Shell, carmaker Peugeot-Citroën, and cosmetics company Natura, at host institutions such as the University of São Paulo (USP), the University of Campinas (UNICAMP), São Paulo State University (UNESP), the Federal University of São Carlos (UFSCar), and Instituto Butantan. At these centers, teams from partner companies engage in long-term—5-to-10-year—collaborations with scientists from universities and research institutes, with a goal of sharing knowledge and finding applications for research outcomes.

Research is co-funded in equal parts by FAPESP and the partner company while, in turn, the universities hosting the centers provide infrastructure and pay researchers’ salaries. “The program has attracted much interest from both corporations and universities. It is one of the largest programs for industry-university research collaboration in Brazil today,” said Carlos Henrique de Brito Cruz, who served as science director at FAPESP until May 2020, during the launch of a research center in partnership with Norwegian oil, gas, and wind company Equinor. Hosted at the UNICAMP School of Mechanical Engineering, the Center will receive joint investments of R$25 million from FAPESP and the partner company over a period of five years, and an additional R$25 million in the following five-year period, with the university paying staffing and facilities costs. The Center does research on reservoir and oilfield management and is staffed by researchers specializing in areas such as mathematics, computer science, mechanical engineering, and geology. “Equinor has long-term collaborations with leading universities in Norway and other countries, including Brazil, with which we have collaborated over the last 10 years in finding solutions to energy and industry challenges,” Margareth Øvrum, the CEO of Equinor Brazil, told Agência FAPESP during an interview.

Another two centers were launched in 2019. One is hosted at USP’s Luiz de Queiroz School of Agriculture (ESALQ) in a partnership with Koppert Biological Systems, a biological pest management company based in the Netherlands, with a presence in Brazil since 2011. In a joint investment of R$40 million, the center is working to develop new approaches to managing pests and diseases affecting soya, sugarcane, maize, cotton, coffee, citrus, and vegetable crops. The initiative has a staff of around 50 researchers. “We will be responsible for developing products, processes and knowledge to advance integrated pest management and agricultural practices in Brazil. These practices can then be replicated in other tropical countries,” Danilo Pedrazzoli, industrial director at Koppert Brazil, explained during the launch of the center.

The third CPE created in 2019 is a Sugarcane Pest Management initiative in partnership with Grupo São Martinho, one of the largest sugar and ethanol producers in Brazil. The center is hosted at UNESP’s School of Crop and Veterinary Sciences and is developing strategies against sugarcane pests as well as research in the fields of biotechnology and plant resistance. FAPESP and São Martinho will invest R$4 million over the first five years. “Our goal is to gain a better understanding of the biological, ecological, and epidemiological aspects of pests and diseases and use that knowledge to develop advanced and innovative pest management methods. Our industry has already shifted to biological control as its preferred pest management approach,” says Odair Aparecido Fernandes, a professor at UNESP’s School of Crop and Veterinary Sciences in Jaboticabal and the lead researcher at the new CPE. In 2019 an Artificial Intelligence CPE was also formed in a partnership with IBM and USP, and will begin operating this year.

Investments in international research collaborations have also expanded: Foundation expenditure across the different funding mechanisms increased from R$169.8 million in 2018 to R$202.9 million last year. The number of Internship Grants for Research Abroad (BEPE) awarded in 2019 rose to 1,108 compared to 1,076 in the previous year. This includes both short- and long-term grants for scientific initiation, master’s, doctoral, and post-doctoral students and researchers. Of the total in 2019, 634 grant beneficiaries went to institutions in Europe, 395 to institutions in North America, 43 in Oceania, 17 in Latin America, 16 in Asia, and 3 in Africa. 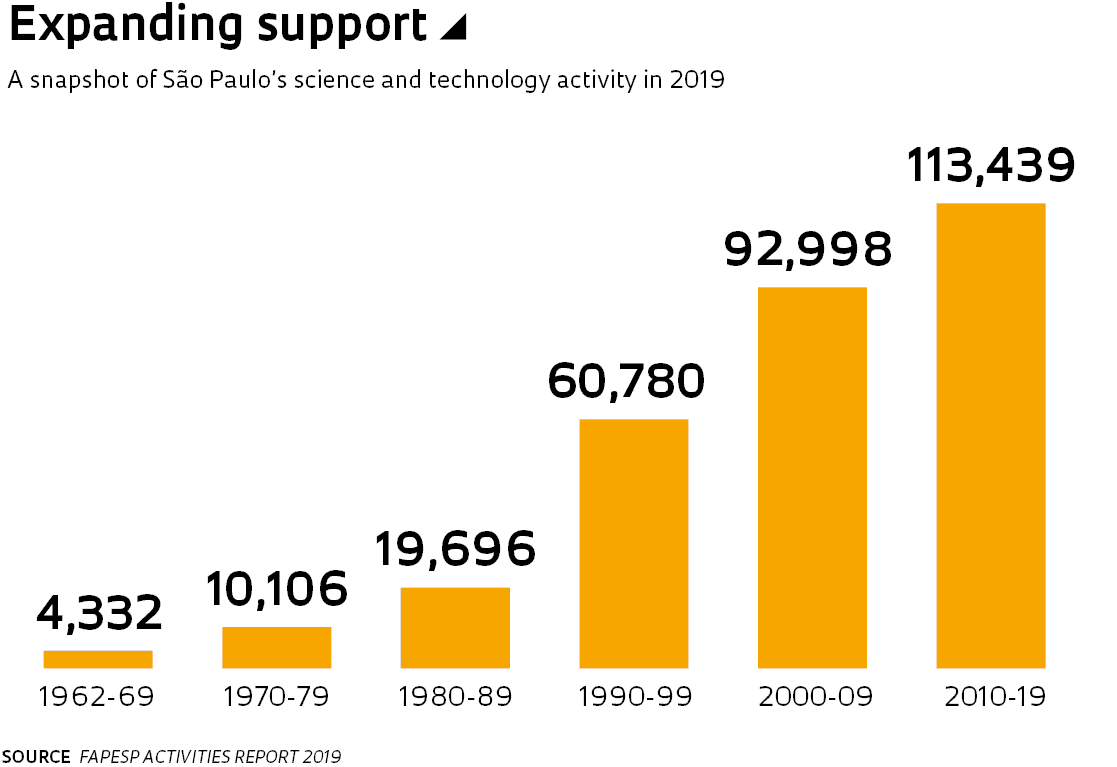 The Foundation has collaborations with 188 foreign organizations and launched 34 new calls for proposals at 28 of these institutions in 2019. FAPESP also organized two editions of its FAPESP Week event—one in London and the other in Lyon and Paris, France. The Foundation’s extensive cooperation with foreign institutions was one reason why São Paulo was selected to host the 8th Annual Meeting of the Global Research Council (GRC)—an organization created in 2012 to share good management practices among research agencies (see Pesquisa FAPESP issue no. 280)—in May 2019. Around 50 delegates from research organizations in 45 countries met in São Paulo to discuss science funding policies and share experiences. The theme of this year’s event was the challenge of responding to growing expectations among governments and the public that research should have societal and economic benefits—and of dealing with the pressure to select projects and analyze results based on potential impact. The meeting was jointly organized by FAPESP, the National Scientific and Technical Research Council of Argentina (CONICET), and the German Research Foundation (DFG).

Year 2019 was also marked by efforts to strengthen FAPESP’s support for the scientific community in São Paulo and for innovative research in local industry. To help train and develop Brazil’s next generation of science leaders, 94 new projects were launched within the Young Researchers in Emerging Centers program in 2019, compared to 54 in 2018. The goal of the program is to attract young doctoral researchers in Brazil and other countries to create new research groups in São Paulo. Also in 2019, the first projects were selected as part of the initial call for proposals for Phase 2 of the Junior Researcher (JR) program, building on high-impact research done by previous JR grant beneficiaries.  In all, 58 Phase 1 grants and 36 Phase 2 grants were awarded in the year. The program is similar to EU-funded European Research Council (ERC) grants, which offer exceptionally gifted junior researchers the opportunity to receive 10 years of funding for research—the Brazilian program provides four years of funding in Phase 1 and five years in Phase 2. Total program expenditure, across research grants and fellowships, was R$69,174,526 in 2019. Out of this total, R$47.7 million was allocated to life science research, R$17.2 million to exact sciences, Earth sciences, and engineering, R$3.98 million to the humanities and social sciences, and R$290,000 to interdisciplinary research. 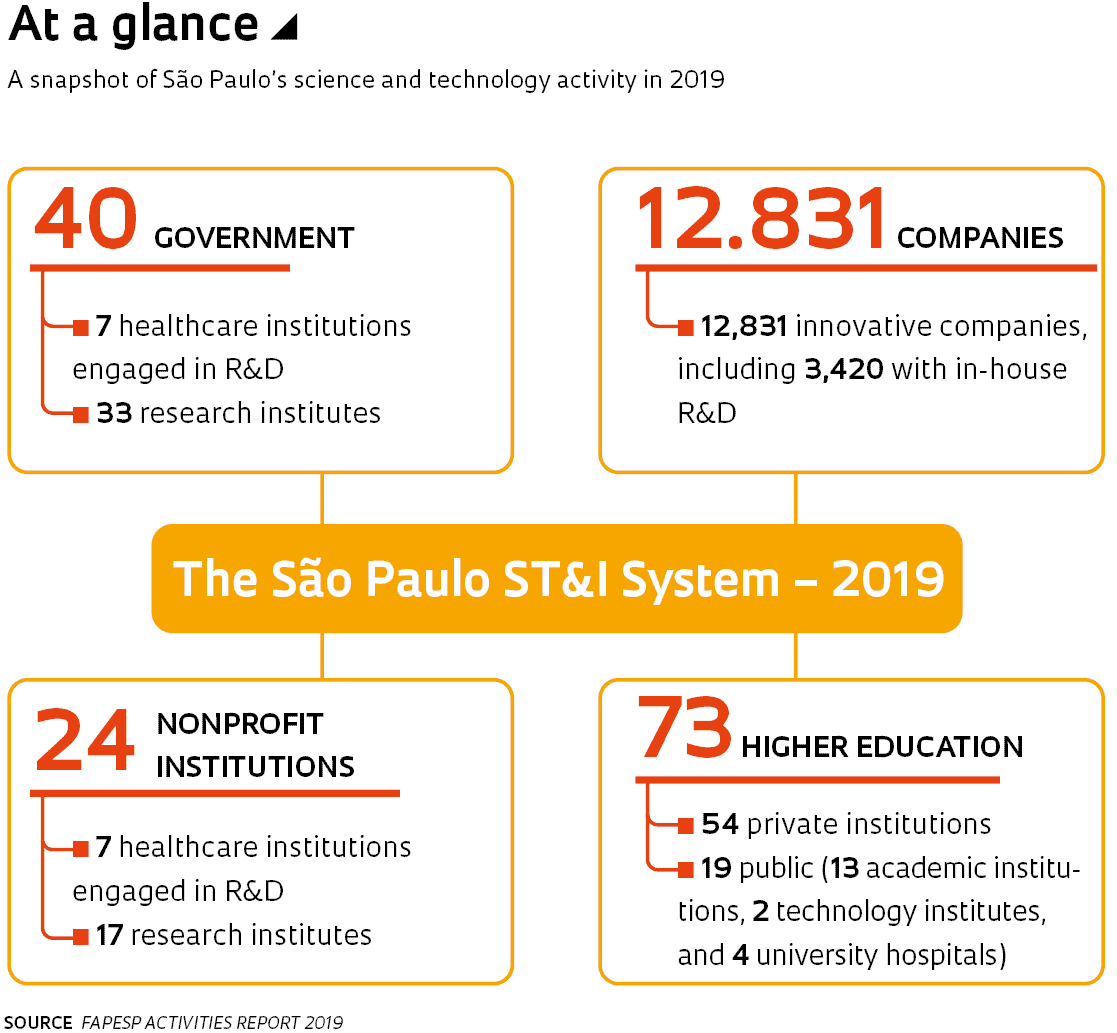 In industry innovation, 234 new grants were awarded within the Research for Innovation in Small Businesses (RISB, or PIPE in the Portuguese acronym) program, increasing the overall grant count to 639 in the year. These grants, combined with research and training grants linked to the relevant projects, generated total program expenditure of R$89.3 million in 2019. The grant count was the third largest in the 22 years of the PIPE program, behind 270 in 2018 and 269 in 2017. An assessment of the program and 189 of its beneficiaries in 2019 found that 80% of projects have been successfully translated into innovation.