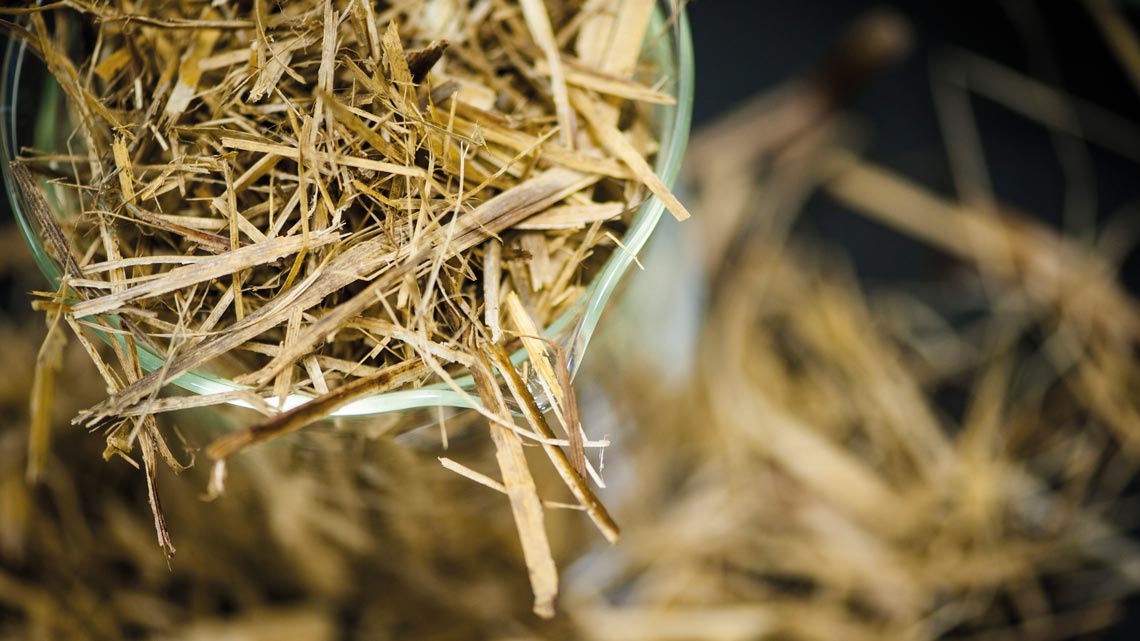 The amount of energy produced from waste materials in Brazil’s sugar and ethanol industry could virtually double by 2030. According to data from the Sugarcane Industry Union (UNICA), Brazil’s 369 sugar and ethanol plants produced enough bioelectricity in 2018 to meet their own energy requirements and leave a surplus of 21,500 gigawatt-hours (GWh) for export to the National Grid (SIN). The surplus, accounting for 4% of Brazil’s total annual electricity usage, is enough to power 11.4 million homes.

The expansion in the coming years is expected to be driven by two main factors. First, the upcoming implementation of the National Biofuels Program (RenovaBio) in January 2020 will provide new incentives for investment in renewable fuel expansion. Zilmar José de Souza, head of the bioelectricity department at UNICA, says that estimates based on data from the Ministry of Mining and Energy’s Power Research Company (EPE) suggest that the program could boost ethanol production from a current baseline of 31 billion liters to 49 billion liters by 2030; this would generate enough waste biomass to produce 34,000 GWh for export to the SIN.

Secondly, the expansion will be fueled by new opportunities to produce energy from two currently underutilized waste materials in ethanol production: stillage, a liquid byproduct from the ethanol distillation process (also known as vinasse); and filter cake, a solid material with high moisture content that is produced during the purification of sugarcane juice. Both substances are rich in organic matter that can be transformed into biogas and a liquid biofertilizer using anaerobic biodigestion—a fermentation process that occurs in the absence of oxygen.

The biogas produced by biodigestion is approximately 62% methane (CH4), 37% carbon dioxide (CO2), and 1% other gases, explains Julio Romano Meneghini, scientific director at the University of São Paulo’s (USP) Research Center for Gas Innovation (RCGI). Thermal power stations can use this biogas as fuel to produce electricity.

Eliminating CO2 through an additional purification step generates a biomethane product that meets the National Petroleum, Natural Gas and Biofuels Agency (ANP) specifications for piped gas, which can be used as fuel in some industries, as a replacement for compressed natural gas (CNG), or as a fuel for thermal power stations to produce electricity. Sugar and ethanol plants can also use biomethane to fuel their trucks and tractors in replacement of diesel. Some of the leading truck and agricultural machinery manufacturers in Brazil have announced plans to launch heavy vehicles powered by natural gas in the near future.

RCGI, an Engineering Research Center (CPE) created by FAPESP in partnership with Shell, estimates in a report published in August that the stillage, cane leaves, and filter cake currently available in the 10 major sugar- and ethanol-producing cities in São Paulo State would be enough to generate 3 billion normal cubic meters (Nm3, a measure of gas volume) of biogas per season.

Lead author Suani Teixeira Coelho, a researcher at USP’s Institute for Energy and the Environment (IEE), says current biogas potential could be used to generate almost 32,000 GWh of electricity, equivalent to around 80% of residential consumption in the state of São Paulo, according to data from the São Paulo State Energy Budget. Alternatively, if upgraded into biomethane, it could be used as a replacement of 30% of the natural gas consumed in the state.

Biodigestion of stillage
Every liter of ethanol produced generates 12 liters of stillage. In the 2018/2019 season the industry produced more than 390 billion liters of this effluent, which can contaminate groundwater with potassium and the air with greenhouse gases such as CO2, CH4, and nitrous oxide (N2O). Much of the stillage produced by ethanol plants is now treated and used as a biofertilizer in sugarcane fields.

André Elia Neto, an environmental and water resource consultant at UNICA, notes that the industry has been in search of better applications for its stillage byproduct for several decades. Generating biogas through anaerobic biodigestion in covered ponds or cylinders has been attempted multiple times since the 1980s. “While the experiments were technically successful, they were ultimately abandoned because the process was sown not to be economically feasible,” he says. 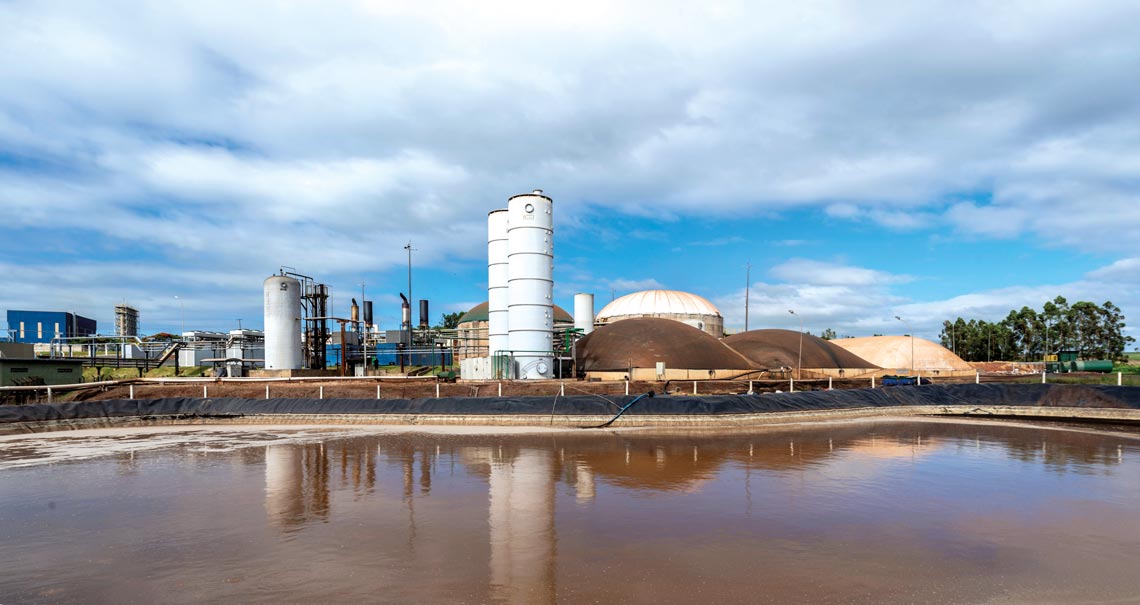 Recently, however, ethanol plants have revived their efforts to produce bioenergy. “There is now greater pipeline coverage to collect the produced biomethane. Diesel prices are also higher than they were in previous decades, providing an incentive for ethanol plants to invest in natural gas–fueled fleets. There is also increasing pressure on the industry to implement environmentally compliant practices for the disposal of waste materials, including stillage,” explains Neto. Using the effluent to produce biomethane would prevent 90% of the greenhouse gas emissions released from stillage when it is disposed of in the environment.

Another recent enabler of bioenergy production is a new biodigestion system that can be fed with a combination of stillage, filter cake, and cane leaves. Developed by Geo Energética, a firm based in southern Brazil, the process uses two biodigesters—one for stillage and the other for other waste materials. Managing Partner Alessandro Gardemann explains that the organic load and energy density in stillage is variable from one season to another, and this makes the biodigestion process spasmodic. The large volumes of stillage that are produced make long-term storage prohibitive, requiring the biodigestion process to be located immediately downstream of the sugarcane crushing operation.

Sugarcane leaves and filter cake have a steadier organic load and higher solid content, so they can be stored in buffer stockpiles and later sent for biodigestion throughout the offseason. “Combining the two waste streams allows plants to generate electricity steadily all year round,” says Gardemann. Geo Energética built its first process in 2012 at Cooperativa Agrícola Regional de Produtores de Cana (COOPCANA), in Tamboara, northwestern Paraná, with a capacity to generate 4 MW of electricity. Toward the end of 2019 the power plant will be expanded to produce 10 MW.

Two other projects are due to start operation next year: one at ethanol giant Raízen’s Bonfim plant in Guariba, São Paulo, with an estimated installed capacity of 138,000 MWh/year, in an investment of R$153 million; and the other at Grupo Cocal’s Narandiba plant in Presidente Prudente, São Paulo, in an investment of R$160 million, with a daily output of 67,000 m3 of biomethane that will be collected by a distribution pipeline network operated by project partner GasBrasiliano. Two biomass power plants secured contracts for their power output in a recent power-purchase auction organized by the Brazilian Electricity Regulatory Agency (ANEEL), demonstrating the economic feasibility of this energy source.

New technologies
Meneghini says that the growing interest in biomethane has provided a stimulus for research into more efficient technologies for biogas purification, a process known as “upgrading.” The conventional technology is filtration using polymer membranes. Two ongoing projects at RCGI are evaluating the potential of new materials, such as ceramic membranes made of zeolite—a porous mineral that does not require the use of chemicals in the cation exchange process (which neutralizes positively charged ions).

Another project is testing membranes made of carbon nanostructures, such as graphene and nanotubes. Physicist Caetano Rodrigues Miranda, of the Physics Institute at USP, explains that much of the research involving carbon nanomembranes is concerned with finding ways to separate methane and carbon dioxide molecules, which have similar diameters. It is difficult to separate them when they pass at high flow rates across conventional polymer membranes.

Souza, of UNICA, believes sugarcane has tremendous bioenergy potential, but that realizing this potential depends to a large extent on having the right public policies in place. The sugar and ethanol industry has lobbied the Ministry of Mining and Energy to implement a power-purchase auction model for the SIN that gives differential treatment to energy from biomass and energy from fossil sources, such as coal and natural gas. This is a global policy issue, as fossil fuel energy normally costs less than energy produced from biomass. “We lag the fossil industry in scale and cost competitiveness, but offer a renewable source with a positive environmental impact,” he says. 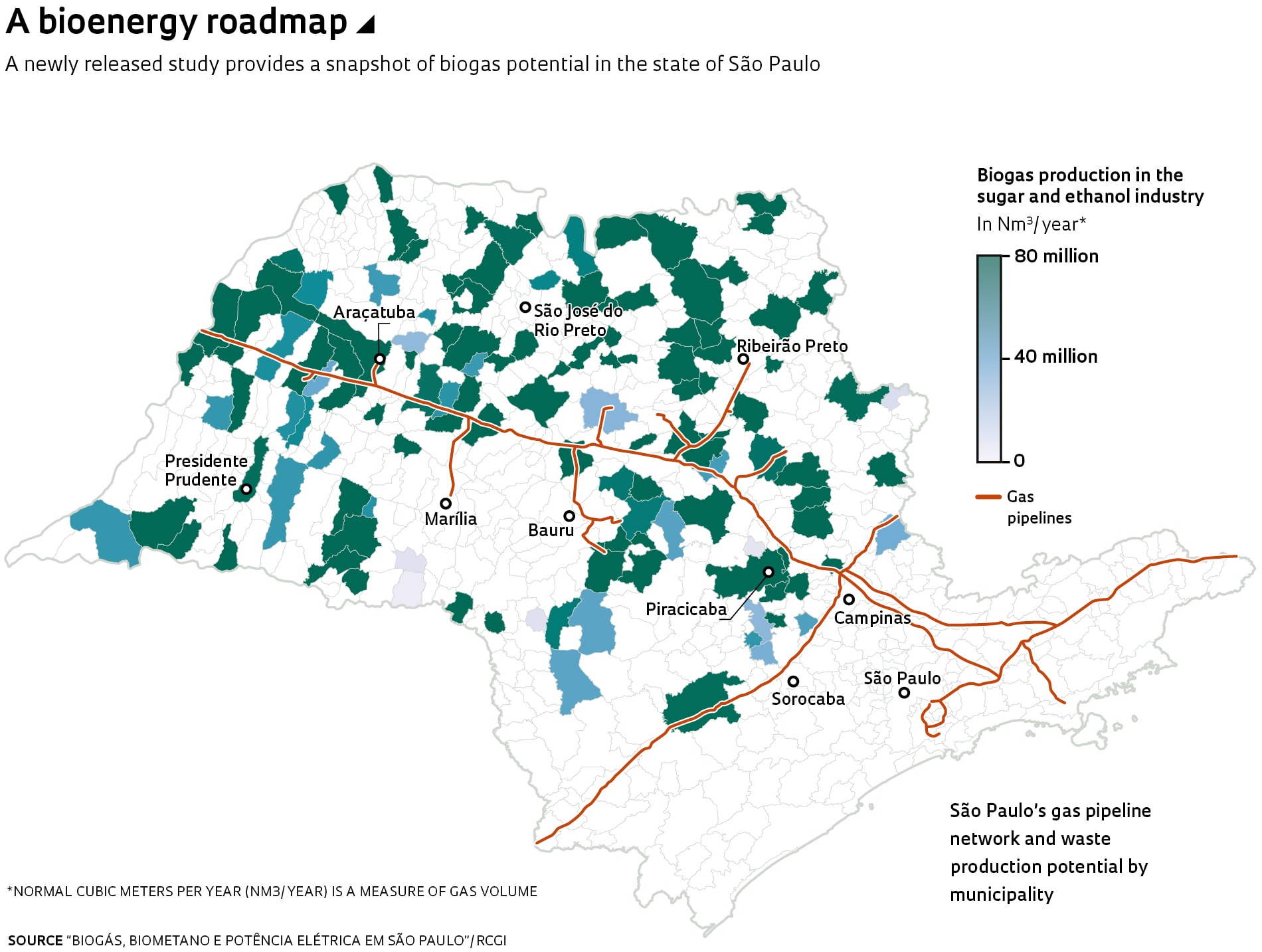 A study titled “Biogas, biomethane, and power generation potential in São Paulo,” released in August by Shell and USP’s Research Center for Gas Innovation (RCGI), developed a set of interactive maps showing the potential for biogas production from municipal and agricultural waste in São Paulo, as well as potential links to the state’s gas distribution pipeline network.
The report found that the amount of biogas that could be produced from all available municipal and agricultural waste would be sufficient to generate 36,200 gigawatt-hours (GWh) of electricity, or the equivalent of 93% of residential consumption in the state. If the biogas were upgraded into biomethane, annual output volumes would be in excess of 3.87 billion normal cubic meters (Nm3), enough to replace 72% of the diesel consumed in São Paulo.

The study’s lead author, Suani Coelho, believes the underutilization of waste-to-energy facilities to produce bioelectricity is due to deficient waste collection systems and the limited number of well-structured municipal landfills. Underinvestment in sewage treatment further limits the supply of waste streams usable in producing biogas. In agriculture, the sector with the best-structured logistics and the greatest potential for bioenergy production from waste is the sugar and ethanol industry.

The maps developed in the RCGI study are designed to support municipal and state policymakers and investors interested in potential biogas and biomethane generation and distribution projects in the state. The study took three years to complete. During that period, the researchers compiled data on waste volumes from livestock farming, crop farming, and municipal solid waste. The data is organized by waste source and geographic location, and supplemented by information about the gas pipeline network in São Paulo State.

The maps are based on data compiled from the Brazilian Institute of Geography and Statistics (IBGE), the Brazilian Power Research Company, Abiogás, consulting firm Datagro, the International Renewable Energy Center (Cibiogás), the São Paulo State water utility (SABESP) and GasBrasiliano, a gas utility operating in the northeastern region of the state.