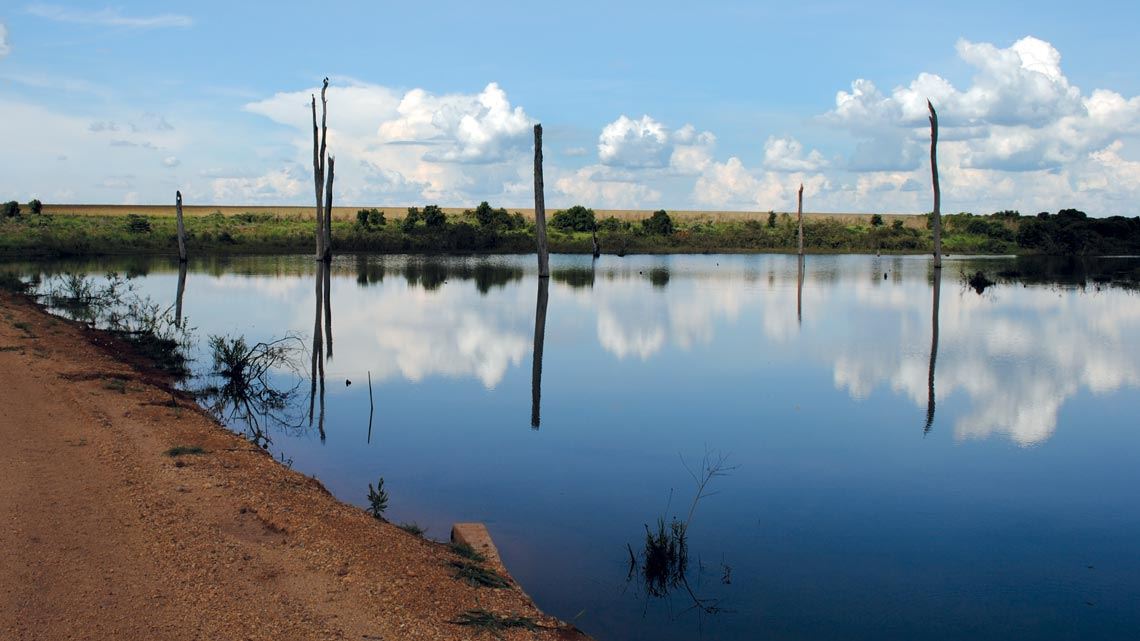 Environmental damage caused by large hydroelectric dams, illegal logging, and the growth of agriculture in the Amazon has been the subject of research for decades. A study by the University of São Paulo (USP) now highlights a type of environmental change associated with these activities, and clearcutting, that has gone almost unnoticed: the proliferation of small reservoirs, lakes, swamps, and ponds in areas degraded by deforestation. The total area of these standing-water environments—which may have been created deliberately or formed accidentally due to changes in land use—favors the expansion of species adapted to non-flowing water ecosystems, such as certain forms of insects, amphibians, and fish.

This phenomenon of an increase of stagnant-water zones is called “lentification” in an article published in June in the journal Perspectives in Ecology and Conservation. “This is the first study, as far as we know, to propose that in deforested areas, standing-water ecosystems may be becoming more common relative to flowing-water ecosystems,” says biologist Luís Schiesari, of the USP School of Arts, Sciences, and Humanities (EACH), who coordinated the research. This hypothesis results from studies that began to be conducted in 2008 in the Upper Xingu hydrographic basin in northern Mato Grosso, the fifth largest drainage in the Amazon, which covers 492,000 square kilometers. One third of Amazonian deforestation occurs in this state. 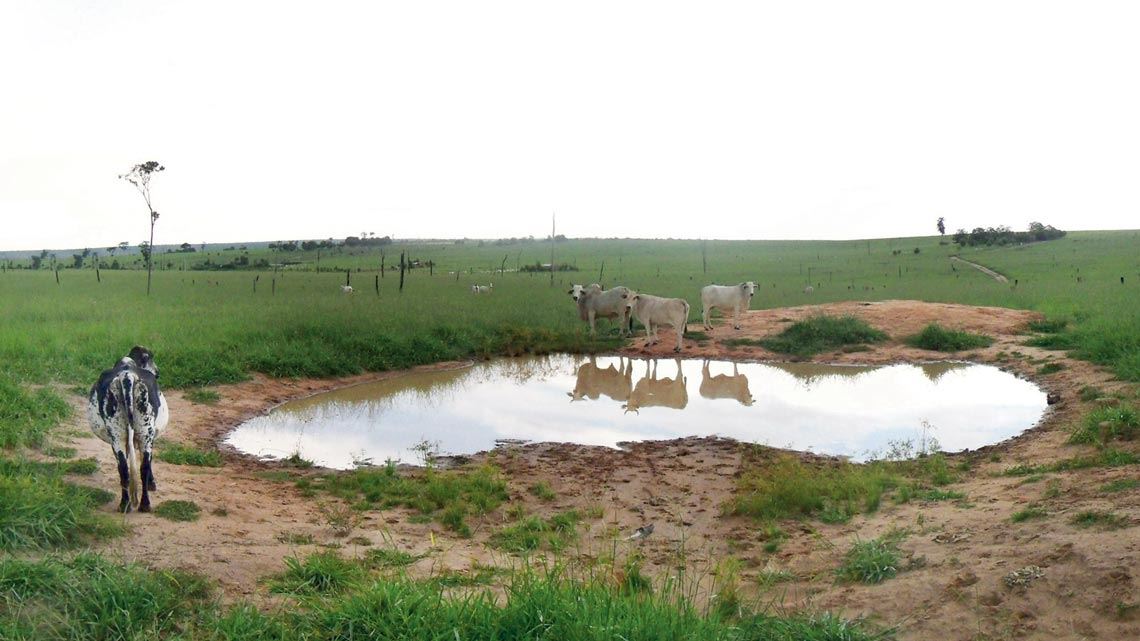 In a Mato Grosso pasture, a rainwater-collection pond for cattle can become a breeding ground for amphibians and aquatic insectsFábio de Sá / UNESP

The field research was conducted between November 2011 and November 2013 in the headwaters region of the Xingu River. These areas are located in the municipalities of Querência and Canarana, where the annual rainfall averages 1,900 millimeters. The researchers marked a total of 26 two-kilometer-long transects (straight lines plotted on the ground) across areas with differing types of land use comprising forests, pastures, and soy plantations. The idea was to ascertain the number of ponds and reservoirs of any size and depth in both the preserved and deforested areas.

At the end of sampling, the researchers observed that there were no reservoirs or ponds in the forested areas crossed by the transects. But, in the deforested environments, the situation was quite different. In the pastures and soybean fields, in each transect they found an average of 0.4 reservoirs and 10 to 12 ponds. Due to this distinction, in these sectors there was a proliferation of amphibians and fish more adapted to stagnant water, or lentic environments. “Amphibians are excellent indicators of hydrologic change, since most species reproduce in standing water,” explains Schiesari. Some of these species are tolerant to environmental degradation, such as the white-spotted tree frog (Boana albopunctata).

In these areas with more ponds, fish such as cará, lambari (tetras), and traíra were also found, which are usually associated with lentic environments or slow-moving sections of streams and rivers. “As expected, the abundance of the small fish Melanorivulus megaroni, which is adapted to life in the ponds of floodplains, was double what we find in streams that cut through the forested areas,” the researcher says. It is important to note that the lentification phenomenon does not necessarily imply an increase in high-quality lentic habitats. “Many of these environments are heated, silted, and contaminated by fertilizers and pesticides,” observes Schiesari.

The warming of waters in the Upper Xingu region had already been observed by biologist Márcia Nunes Macedo, the Water Program director at the Woodwell Climate Research Center in the United States, who is also an associate researcher at the Amazon Environmental Research Institute (IPAM). According to one of her studies—one of several that served as a reference for the Schiesari research team’s field observations—streams in pastures and hydrographic basins planted with soybean are significantly warmer than those in forested areas. “On average, the maximum daily temperature was 4° C higher in pastures and 3° C higher in soy plantations than in the preserved areas,” explains Macedo.

Schiesari believes the ecological imbalance resulting from lentification may contribute to the proliferation of diseases in many deforested areas of the Amazon. “Although several factors are involved, aquatic environments of anthropic origin, such as ponds and small reservoirs, are related to a higher frequency of species of Anopheles mosquitos, which transmit malaria. Likewise, the construction of dams can multiply the incidence of schistosomiasis by greatly expanding the habitat available to the snail that transmits the disease,” she says.

The formation of small reservoirs is among the main factors for the creation of lentic environments in the Upper Xingu. In 2010, through remote sensing analyses, Macedo identified the existence of 10,000 small dams, each with an average reservoir area of one hectare, equivalent to about 1.5 soccer fields. “Many function as water reservoirs for cattle, or lakes for fish farming,” the researcher says. “In addition to engineering projects that have the deliberate purpose of accumulating standing water, there are also roads that bisect streams, which then end up also acting as dams,” adds Schiesari. To Macedo, there is still a need for a comprehensive look at aquatic ecology in these tropical forest areas. “The original creation of the Xingu Indigenous Park did not take into account the location of the rivers’ headwaters, which became vulnerable because they were outside the limits of the conservation area,” the biologist says.

Deforestation is another important factor in the lentification of water resources. When trees with deep roots and leafy tops are replaced by grasses and herbaceous plants (such as soybeans), evapotranspiration, the process that returns rainwater to the atmosphere, decreases. Less water evaporates from the soil, and plants reduce their transpiration. Since less water is pumped into the atmosphere, a larger fraction of rainfall reaches the rivers through runoff or infiltration. Levels in waterbodies rise and the width of the floodplain area increases, where temporary ponds can also form. Machinery traffic and trampling of cattle promote soil compaction, which is another factor that favors pond formation. “Depending on the type of soil, the age of the pasture and the density of cattle, soil compaction in livestock areas can be from 8 to 162 times greater than in forests,” Schiesari says.

It’s difficult to predict the long-term impact the proliferation of ponds and reservoirs in deforested areas in the Amazon will have on biodiversity. “We still don’t know what result this will have on the ecosystem, which is going through many changes,” says agronomist engineer Luiz Antônio Martinelli, from the Center for Nuclear Energy in Agriculture (CENA), at USP’s Piracaba campus (who did not participate in the studies). Analyzing these changes is like putting together a puzzle. “Each research group is putting in a different piece,” notes Martinelli. In his opinion, the contribution of the EACH group’s study was to bring the effect of lentification on Amazonian biodiversity to the foreground.