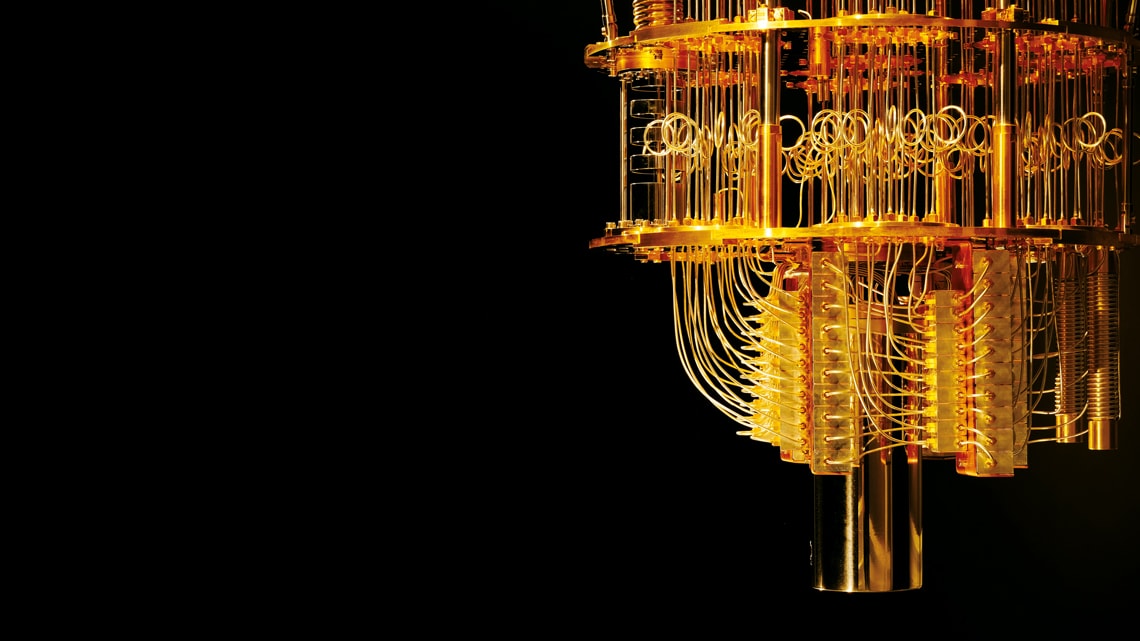 Quantum computers, which utilize the properties of subatomic particles in their processing systems, are finally moving from research labs to the commercial world. An important move in this direction was recently made in the United States by the IBM corporation, with the launch of the IBM Q System One. The first universal quantum computer available to the public, it is capable of various types of operations. This is an important point. Although Canadian company D-Wave Systems introduced its pioneering quantum processor just over a decade ago, their equipment performs only specific tasks, such as solving optimization problems, i.e., choosing the best solution from countless variables.

In late September, the British journal Financial Times reported that Google may have reached “quantum supremacy,” the point at which a quantum computer could perform an operation that a traditional machine would not be capable of. According to their report, the Google-designed Sycamore chip has performed a calculation that today’s most powerful supercomputer, the IBM Summit, would take 10,000 years to accomplish—in just over three minutes. An article detailing the experiment should soon be published by Google researchers in a science journal.

The quantum computer’s trajectory from theory to laboratory has taken many years, and is still far from arriving at a satisfactory stage, even with the recent advances from IBM and D-Wave. In the 1980s, American physicists Paul Benioff and Richard Feynman (winner of the 1965 Nobel Prize) demonstrated, along with Israeli scientist David Deutsch, that quantum mechanics could give rise to a new kind of computing. At the nanoscale, particles have particular properties such as superposition—the combined overlapping of different states—and entanglement, when two or more particles interact and exhibit behavior distinct from what would be expected in the classical mode.

While in classical computation bits (or binary digits) can assume only one value, 0 or 1, where 0 represents a signal without electrical current and 1 a signal with current, quantum computing works with 0, 1, and combinations of 0 and 1 at the same time. These are the quantum bits, or qubits.

These features allow the quantum computer to perform simultaneous calculations faster—by orders of magnitude—than today’s supercomputers. As theoretical physicist Frederico Borges de Brito of the São Carlos Institute of Physics at the University of São Paulo (IFSC-USP) explains, the purpose of quantum computing is not to replace classical computers, but rather to offer a new way to solve problems, such as complex simulations and probabilistic questions that today’s computers have difficulty answering. Brito worked on equipment design at IBM during his postdoctoral internship from 2006 to 2008, and as a researcher at D-Wave from 2008 to 2009. 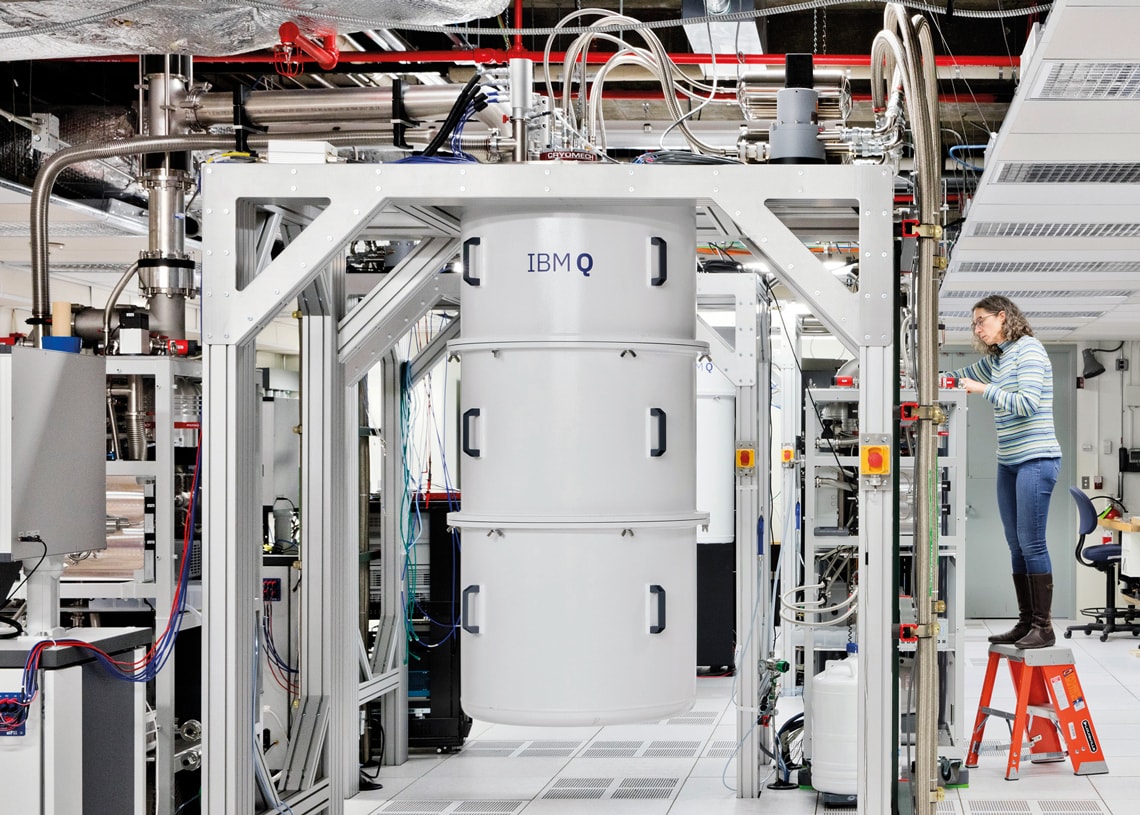 Assembling the IBM Q System One, which occupies a nine-square-meter areaIBM

“Factoring a large prime number is a task that can take years on a classical computer. With a quantum computer, it could potentially only take seconds,” explains Brito. With a quantum computer, cracking cryptographic codes used for banking security may no longer be a challenge. Another operation for which these new machines would be more efficient is in simulating the behavior of molecules. This is expected to have advantages in protein folding (the chemical process in which proteins assume functional configurations), generating new possibilities for the development of pharmaceutical products. Nanotechnology and research on new materials should also benefit, as would the financial sector, where quantum computing could be used for analyzing investment portfolios and the behavior of corporate shares on stock exchanges over time.

Building a quantum computer, however, is a complex task. Current machines take up a ten-square-meter room and their qubits are highly unstable and susceptible to losing their integrity when exposed to nature. Any interference, such as vibration or noise from other power sources may lead to calculation errors. This means they must be isolated from their environment. To maintain their properties, qubits operate at a temperature of -273.15º Celsius, which is very close to absolute zero. The more qubits, the more sophisticated the engineering required. IBM and D-Wave have come up with different solutions to address the problem.

The IBM Q System One is a 20-qubit machine that combines quantum and classical computing systems. The computer, introduced to the public in January, is available in the cloud for commercial and scientific use. According to Ulisses Mello, lab director at IBM Research–Brazil, the company’s goal with the equipment is to show that even though its processing capacity is still limited, the quantum computer is viable and available to the public. It is not just a lab experiment.

At its New York research center the company works with 50- and 70-qubit versions. It’s still a low number, Mello admits, but it’s a step on a path intended to reach a thousand. “Reaching 150 or 200 qubits, where there could already be significant applications in many areas, may not be too far away,” the executive says. “Modeling the caffeine molecule takes something like 1048 bits, something impossible today. With 160 qubits it will be possible,” he says.

IBM is making a free cloud platform called the IBM Q Experience available to the public, which already has over 100,000 users. The company also has more than 60 business partners who are trying out the technology through the IBM Q Network. Auto manufacturer Daimler, the ExxonMobil corporation, and investment banking firm JPMorgan Chase & Co. are among them. There are no Brazilian companies using the network at this time.

Focus on applications
IBM’s Brazilian lab did not participate in the hardware development phase of the IBM Q System One. Its Brazilian researchers are focused on developing applications. Their current task is to identify problems that can be best resolved by the quantum computer, and to look for partners interested in contracting these services. The initial projects seek opportunities in the financial market, logistics, and the chemical industry. One application under development is for IBM’s own research, which is trying to determine how to expand oil extraction in reservoirs by studying the behavior of liquid oil molecules in contact with a solid material.

When Canadian firm D-Wave unveiled the first version of its quantum computer in 2007, it surprised academic researchers by presenting an unexpected processing solution that adopts an adiabatic protocol—where the equipment works at the lowest possible energy level—and not as a circuit, like IBM’s. The advantage, according to Frederico Brito, is that this system can be expanded, incorporating a much larger number of qubits. On the other hand, the D-Wave computer only performs specific tasks. It specializes in optimization problems, such as defining the most efficient logistics route for a truck to deliver ice cream in a congested city like São Paulo, while taking into account all variables, such as the number of locations to be visited, time spent in operation, and the costs involved.

Susceptible to errors
Another limitation of D-Wave machines is that, for now, the system it uses is still prone to making errors. It’s indicated for probabilistic computation—where the answer presented is the most probable—not deterministic solutions, as with classical computers.

Unlike IBM, whose strategy is to sell cloud-computing time, D-Wave decided to market its actual equipment. The first unit was purchased in 2011 by US defense manufacturer Lockheed Martin. With 128 qubits, the machine occupies a 10-square-meter equipment room, and has a cryogenic system capable of cooling the central processing unit. Google and US space agency NASA are among the computer’s customers, which in its current version—the D-Wave 2000Q—offers 2,000 qubits. The company doesn’t disclose the value of its equipment, but a 2014 Time magazine report estimated its price at US$10 million.

The limitations of today’s machines classify them as Noisy Intermediate-Scale Quantum (NISQ), i.e., noisy, medium-sized quantum computers. The “noisy” denomination indicates that they are subject to errors for which they do not yet offer error-correction systems. “One of the themes of this frontier is the development of algorithms that can deal with these limitations, and predicting what could be explored in the near future,” says physicist Leandro Aolita, from the Institute of Physics at the Federal University of Rio de Janeiro (UFRJ). 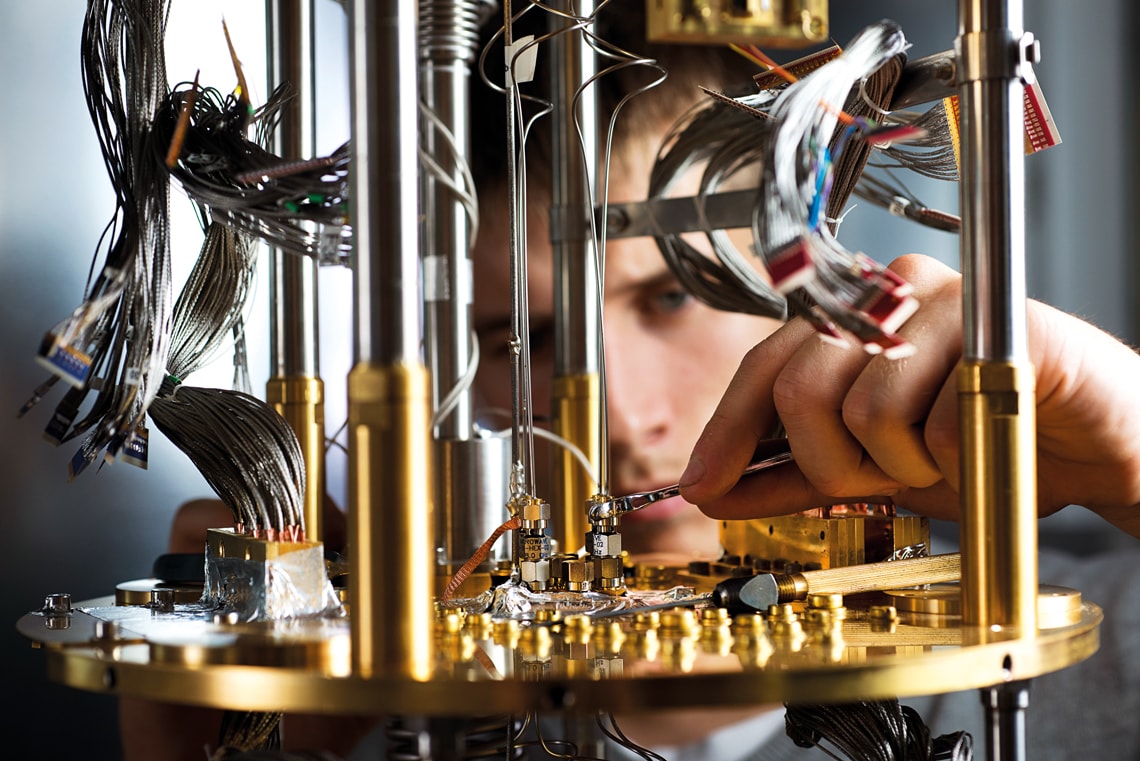 The researcher explains that the possibilities of creating quantum algorithms with today’s computers are still limited. To circumvent this obstacle, most projects utilize hybrid operations that employ classical and quantum computation together. “With classical algorithms it’s almost impossible to establish patterns. But hybrid processing can significantly accelerate this process,” says Aolita.

In Brazil, about 200 researchers are associated with the National Institute for Science and Technology of Quantum Information (INCT-IQ). They are grouped into activities across 12 quantum technology labs. While there currently aren’t any quantum computer projects under development in Brazil, there is an initiative at the Physics Lab on Superconducting Circuits for Quantum Devices at the University of Campinas (UNICAMP), which plans to create the first Brazilian device to use superconducting qubits in 2020. “In the beginning, it will have no more than 3 qubits,” says physicist Francisco Paulo Marques Rouxinol, the lab’s coordinator.

The UNICAMP lab was created to study natural systems of behavior that could be used to develop quantum technologies in the future, such as simulators and memories. “We want to contribute to the study of quantum mechanics at the macroscopic limit, to understand why there is a division between the quantum world and what we observe directly, the world of classical mechanics,” Rouxinol explains.

He believes the availability of quantum computers with higher processing capacity will be crucial for laboratory researchers to test the hypotheses they study. As Frederico Brito of IFSC-USP notes, quantum computing is still in its early stages and the possibilities yet to emerge from its development are unforeseeable. “The only thing we know is that we are probably on the threshold of a revolution,” he states.