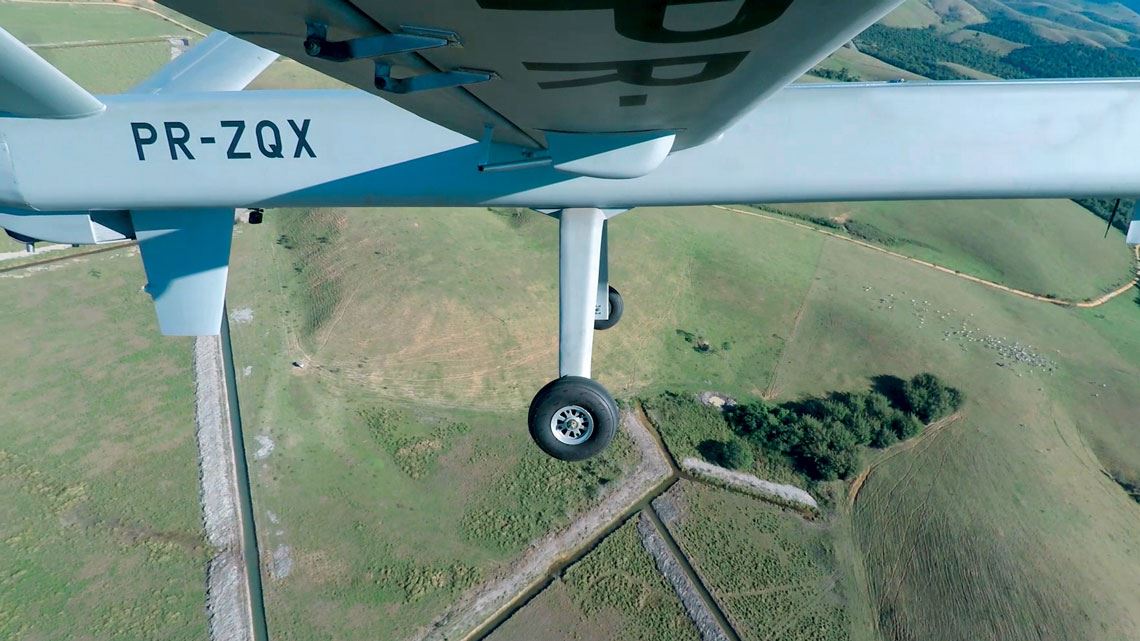 After five years of development, the Atobá made its maiden flight in July 2020

Brazil has come a step closer to entering the group of nations producing large drones, technically known as unmanned aerial vehicles (UAVs). In July 2020, Stella Tecnologia, a firm based in Duque de Caxias, greater Rio de Janeiro, completed the maiden flight of the Atobá, a remotely piloted air system measuring 500 kilograms (kg) in weight, 8 meters (m) in length, and 11 m in wingspan. Named after a large marine bird commonly seen along Brazil’s coast, the UAV is designed for both civilian and military applications and is the largest Brazilian-built aircraft of its kind to successfully take flight.

Around 10 years prior, Brazilian defense contractor Avibras started development of a UAV of the same class as the Atobá, dubbed Falcão, but the project was abandoned before any flight was undertaken—and after at least R$85 million was spent on development (see Pesquisa FAPESP issue no. 211). Currently only a handful of countries—including the US, China, Israel, Russia, Iran, France and the UK—have the technology to manufacture military unmanned aircraft of this size, which have been increasingly deployed in war and conflict zones, especially in the Middle East.

“The Atobá carried out two flight tests, the first lasting 20 minutes and the second a half-hour. Everything went as expected. The aircraft’s stability and responsiveness to commands were excellent,” says Stella Tecnologia CEO Gilberto Buffara Júnior. “It was designed to be simple, fail-proof, and easy to operate and maintain.” The flight tests were conducted from a private aerodrome in Brazil’s southeastern municipality of Casimiro de Abreu on July 20, the day Brazilian aviation pioneer Alberto Santos Dumont (1873–1932) was born.

The Atobá is designed for use by the military in border and coastal surveillance and recognizance missions, and by law enforcement in monitoring major events and in search and rescue missions. It has a 70 kg payload capacity for equipment such as radar systems, surveillance cameras, and multispectral sensors, which capture images using different wave frequencies in the electromagnetic spectrum, such as infrared. 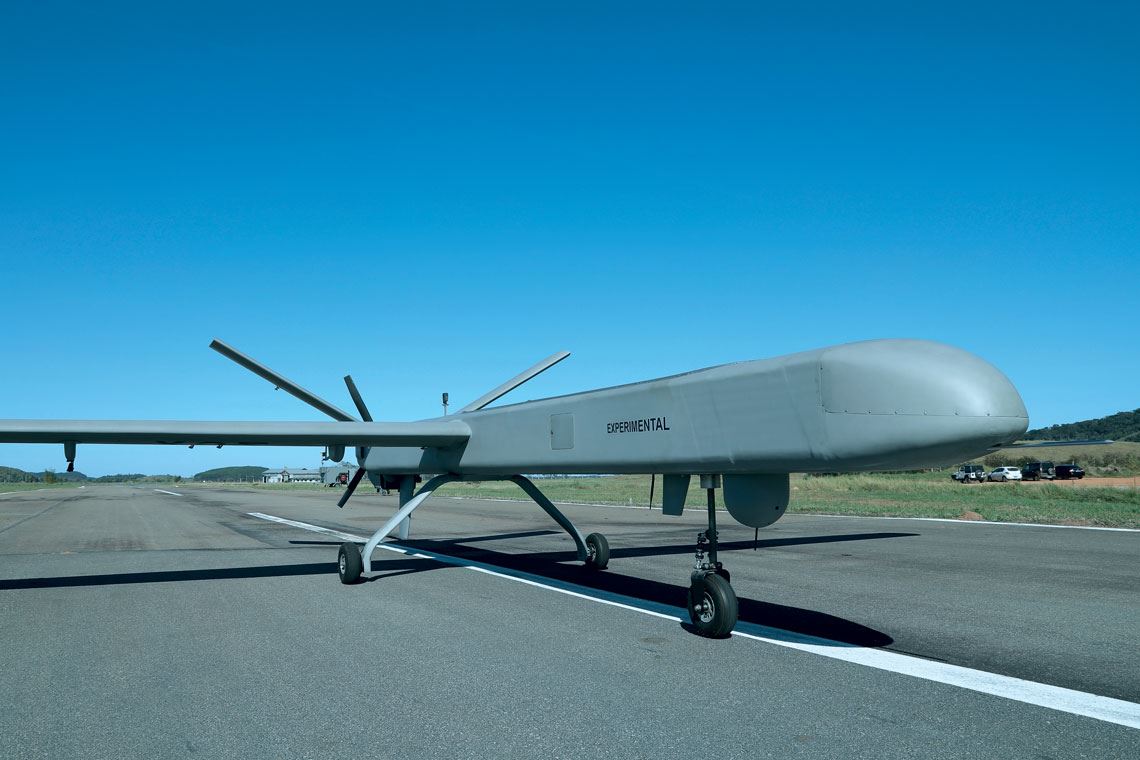 The Atobá was developed at a cost of R$11.5 million and in collaboration with students and professors from UFRJStella tecnologia

Controlled from a ground station, the UAV is propelled by a 4-stroke 60 horsepower (hp) gasoline engine and has an endurance (flight time without refueling) of 28 flight hours. Its range of 250 kilometers (km) is limited by the ground station communication radius. The Atobá can fly at speeds of up to 150 km/h and at altitudes as high as 5,000 m, where it is imperceptible to the naked eye—for comparison, airliners fly at around 11,000 m. Although not designed to carry armaments, the Atobá can be adapted to deploy missiles and bombs within its payload capacity.

Vivaldo José Breternitz, a UAV expert and a professor at the School of Computing and Informatics at Mackenzie Presbyterian University, in São Paulo, explains that the maiden flight of an aircraft, whether crewed or unmanned, is a significant milestone in that it demonstrates the project has been successful so far. But the manufacturer will still need to run a large number of flight tests before the Atobá becomes an operational UAV. “It still has a long way to go,” he says.

And while the drone developed at Stella Tecnologia is a breakthrough for the Brazilian aerospace industry, says Breternitz, it is less sophisticated than other projects being developed elsewhere. “The UAV universe is highly diverse. The US Air Force is working on a project, called Skyborg, to develop artificial intelligence-enabled unmanned combat aerial vehicles (UCAVs) as wingmen for manned fighter aircraft. China, in turn, is developing a UCAV, called Dark Sword, which is expected to fly at speeds as high as 2,400 km/h,” he says.

Even so, Breternitz believes it is important for Brazil to develop the capabilities to manufacture military UAVs in the class of the Atobá. “I very much believe in developing solutions locally, and not only for drones. Initiatives such as Stella Tecnologia’s drive local research, help to develop skilled labor, and build manufacturing capacity,” he says.

For Breternitz, the ideal approach to the UAV market would be that used by successful players in the aerospace industry: find and build world-class capabilities in a niche market to win global market share. A case in point is Brazilian aircraft manufacturer Embraer. After it was privatized in the 1990s, the São José dos Campos-based company specialized in regional, short-haul aircraft and has now become the global market leader in this segment.

Development of the Atobá started five years ago and has cost R$11.5 million so far. “I had no third-party funding; the entire investment came from the sale of my first drone company, SantosLab, and other businesses in real estate. I’m now looking for investors to complete the project,” says Buffara, who still has work to do to refine the UAV’s design, including its heavyish frame. Before the airworthiness certification process begins, the Atobá will be fitted with a locally produced autopilot system in replacement of its current, foreign-made system.

Engineering students from the Federal University of Rio de Janeiro (UFRJ) participated in the project through an academic internship arrangement with Stella Tecnologia. UFRJ also provided access to laboratories for testing, including testing on materials for the UAV frame—the wings and fuselage are made of composite materials that are lighter and stronger than conventional aluminum.

One of the biggest challenges was designing and then building the fuselage. “It was difficult as very little technical information is publicly available on this type of equipment. We were only successful after a lot of trial and error,” says Buffara. Another challenge was integrating the aircraft’s electrical and control systems so they operate properly together. “We had resolve electromagnetic interference issues affecting the different systems.”

In dealing with these challenges, Buffara, who has a degree in business administration, leveraged his extensive experience in drone development. In 2006, SantosLab—which Buffara cofounded with a partner—designed and built a small UAV, called the Carcará, for the Brazilian Navy, with a wingspan of less than 2 m and a weight of just 4 kg. “This was the Armed Forces’ first order for this type of equipment,” he says.

In 2015, Buffara sold his stake in the business, assembled a team of professionals with prior experience of developing aircraft—mostly mechanical and systems engineers, but also aeronautical engineers—and founded Stella Tecnologia to develop the Atobá. Over the previous five years, he has received support from several consultants in developing the UAV’s design.

Nei Brasil, head of the unmanned aircraft department at the Brazilian Aerospace Industry Association (AIAB), believes there is strong global demand for UAV classes like the Atobá, but that the success of the project will largely depend on whether it secures interest from the Brazilian government. “What really matters is whether a firm’s host country will support the development of the project through to production by placing orders,” he says. “A previous initiative by Avibras to build a UAV of this size, the Falcão, was discontinued after it failed to attract commercial interest in Brazil.”

Buffara is currently in talks with the Brazilian military, but no firm negotiations have yet taken place. Stella Tecnologia is accredited by the Ministry of Defense as a Strategic Defense Company (EED)—an approved supplier to the Armed Forces.

The Brazilian Air Force currently operates at least three different UAV models: the Hermes 450 and Hermes 900, made by Israeli company Elbit Systems, and the Heron I, from Israel Aeroespace Industries (IAI). The Hermes 450 is similar in size and operational capabilities to the Atobá; the other two are in a larger class of UAVs weighing more than 1 ton.

“The Brazilian Air Force’s remotely piloted aircraft are used in surveillance missions to provide ground and air forces with accurate intelligence and reconnaissance data,” the Air Force Public Affairs Agency said in a statement about the UAVs. Neither the Air Force nor the Ministry of Defense have responded to requests from Pesquisa FAPESP to comment on whether the government has any interest in the Atobá.

“The Air Force paid about US$25 million for two Hermes 450 UAVs, whereas two Atobá UAVs, including the ground control station and training, would cost a third of that amount,” says Stella Tecnologia’s CEO. The Atobá is not only cheaper, but also boasts a longer endurance than its Israeli competitor’s 17 hours (as specified on the manufacturer’s website), as well as accommodating more advanced sensors and cameras, says Buffara. “We are optimistic about our drone. We hope to complete the project and make it operational later this year.”