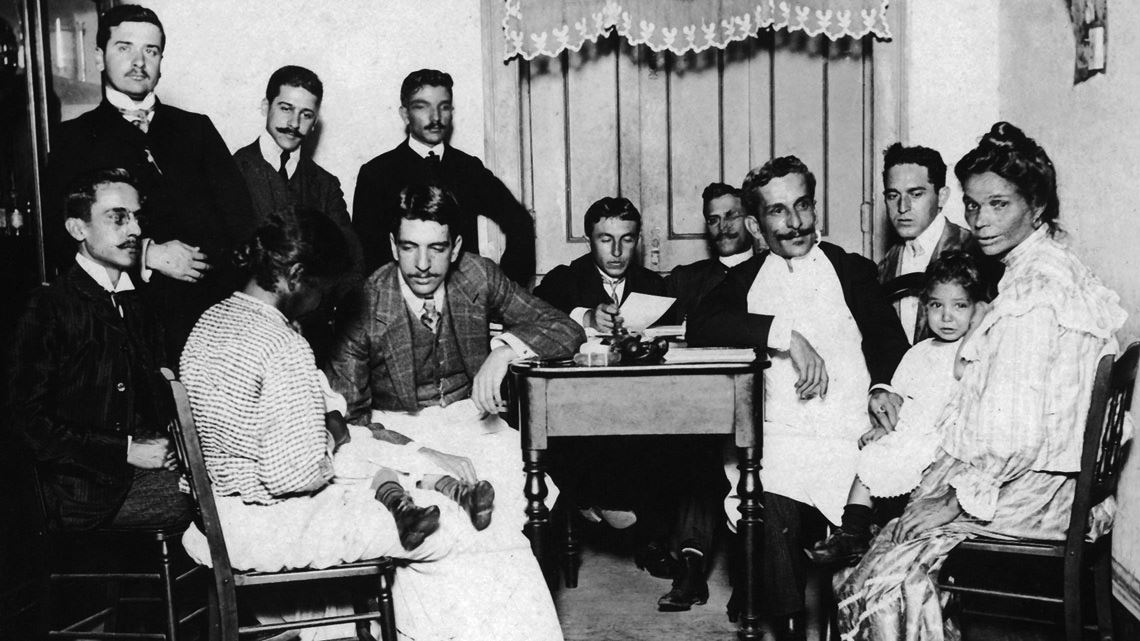 Doctors and their assistants treating children at IPAI, established in 1899

In a seven-page article published in 1875 in Revista Médica (Medical Journal), Rio de Janeiro doctor Carlos Arthur Moncorvo de Figueiredo (1846–1901) reported the successful use of a potassium chloride solution to treat a child with diarrhea, after the mother had told him she had—for whatever reason—given the child salt instead of the formulation he had recommended. Later described in a 42-page study published two years later, this marked the beginning of Figueiredo’s pediatric research—and of pediatrics itself in Brazil. Moncorvo Senior, as he was also called, established working methods, built a clinic in his home to treat children, defended the teaching of pediatrics in the Rio de Janeiro School of Medicine (FMRJ, now part of the Federal University of Rio de Janeiro), and trained doctors who strengthened this medical specialty in Rio, São Paulo, and Porto Alegre.

Like the French doctors that inspired them, the first child-focused physicians Brazil argued that children were not miniature adults and had unique characteristics that must be respected. Their goal was to reduce the high infant mortality rates: in the late nineteenth century, 460 out of 1,000 children who survived birth would die before 7, mainly of diarrhea and tuberculosis. 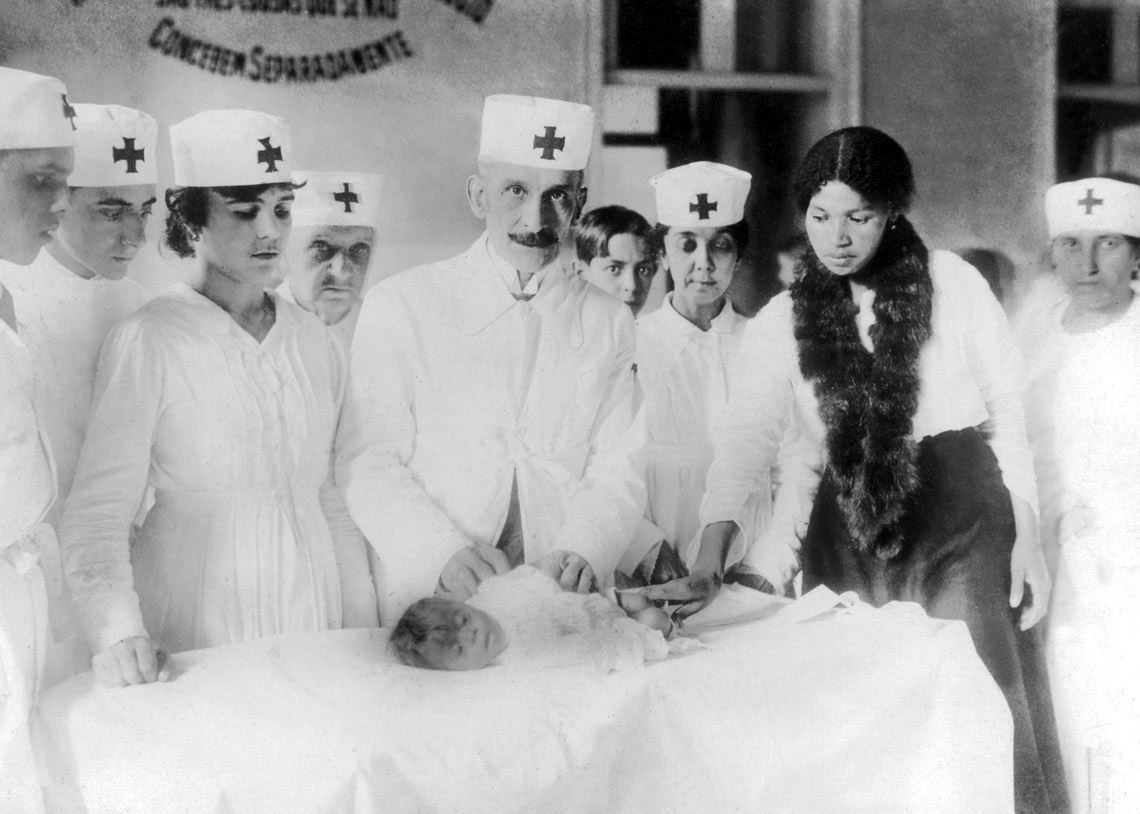 Moncorvo Filho examines a child in 1918, during the Spanish flu epidemicCOC-Fiocruz Archive

To mitigate another problem—the abandonment of newborns in the streets—religious institutions such as Santa Casa de Misericórdia adopted the use of the foundling wheel, a rotating wooden cylinder where mothers could anonymously leave their newborn children, who were then given up for adoption or raised in convents. The Rio Santa Casa records receiving 47,255 children from 1738 to 1888, when slavery was abolished in Brazil, or 315 per year on average.

“Childhood was viewed very differently than today,” notes historian Gisele Sanglard, from the Oswaldo Cruz House at the Oswaldo Cruz Foundation (FIOCRUZ-COC). Because of the 1871 Freedom of Wombs Law, the children of female slaves were born free and could remain with their mothers until the age of 7; by then, they were expected to make a living for themselves. “Poor children, with or without a family, would usually work in factories, machine shops, and Navy arsenals,” she explains. “Workplace accidents involving children were also common.” 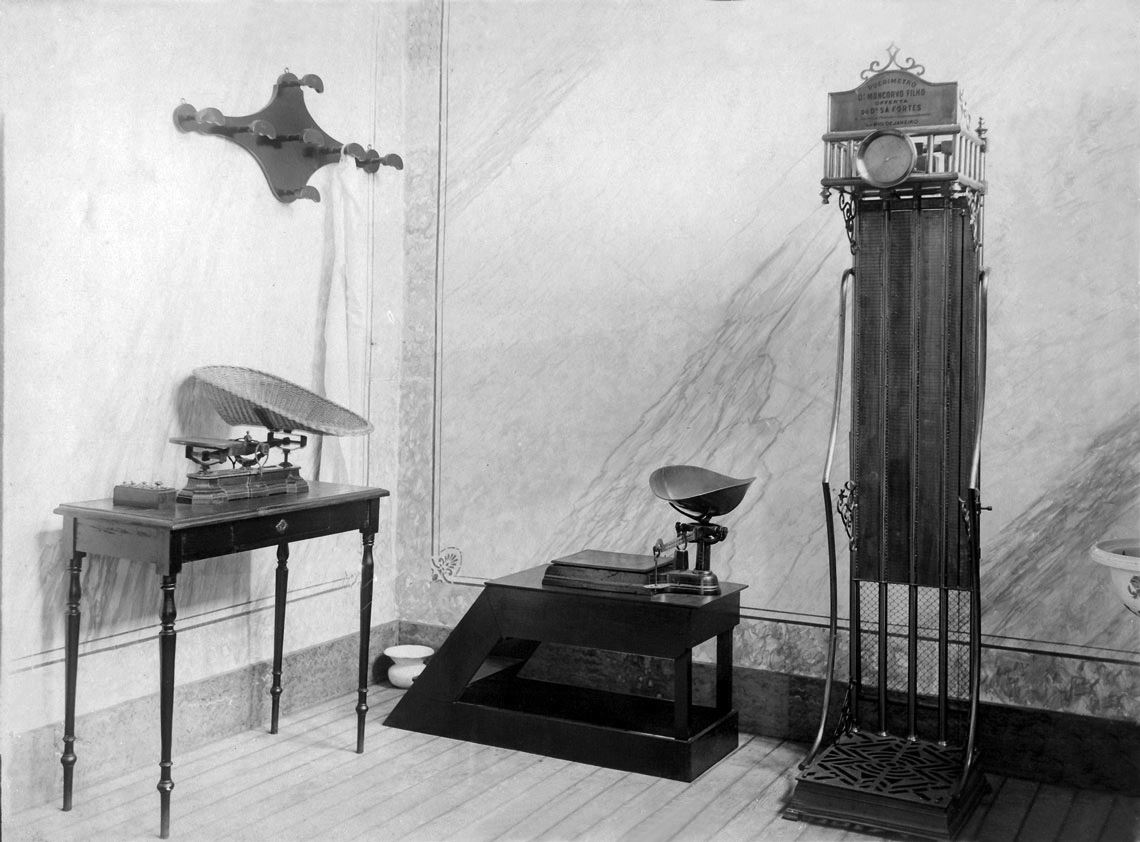 According to Sanglard, since breastfeeding was not in vogue at the time—lower class women had to go back to work soon after giving birth, while higher class women wanted to avoid saggy breasts—female former slaves made a living as wet nurses. Doctors would warn of the risk posed by wet nurses, whose health was not monitored, as they could transmit tuberculosis, syphilis, and other diseases to babies.

“Pediatrics began in a practical context and by the medical elite,” explains historian Virlene Moreira, from the Federal Institute of Bahia, author of an article about Figueiredo published in the April 2020 issue of História, Ciências, Saúde – Manguinhos (History, Sciences, Health Care – Manguinhos). An 1871 graduate from FMRJ, Figueiredo learned pediatrics in practice over the following two years, visiting hospitals in Paris and other European capitals. In 1874, back in Rio, he published an article criticizing medical training in Brazil and proposing reforms, such as offering courses on childbirth and childhood diseases. For some years, he treated adults and children with gastrointestinal issues—his specialty—at his clinic and at Santa Casa, before prioritizing child health care. 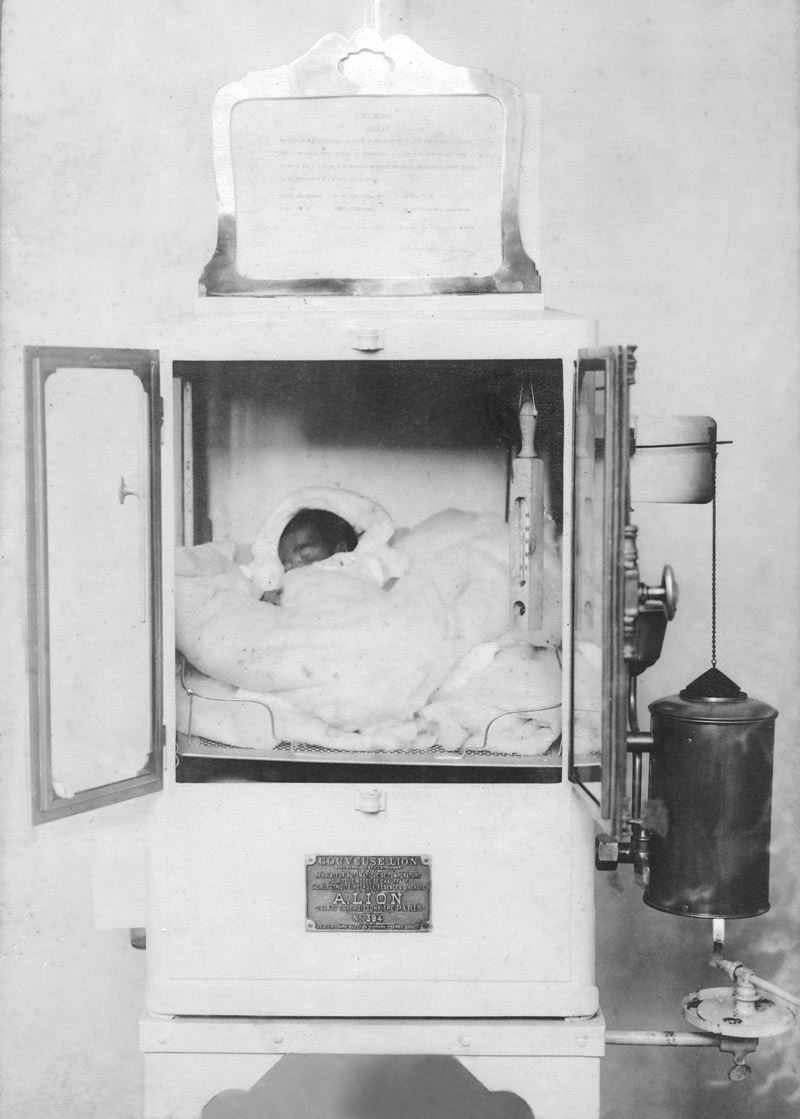 An incubator for newborns in the early twentieth centuryCOC-Fiocruz Archive

At this time, shares Sanglard, “the government only concerned itself with epidemics, otherwise letting people handle their own diseases.” In December 1881, Figueiredo and a group of doctors founded the General Polyclinic Hospital of Rio de Janeiro, initially established in his own home in downtown Rio, to treat sick adults and children. Six months later, he opened a larger establishment provided by the government, with a ceremony attended by Dom Pedro II and other court officials, doctors, and medical students. In both clinics, poor children were treated for free, while the parents who could afford to pay treatment would do so.

The Polyclinic had 12 doctors and a pharmacist and became a place of treatment—with 8,375 children treated from 1882 to 1894—teaching, and research. In 1882, Figueiredo identified and treated a case of childhood whooping cough in the Polyclinic which he then studied for the next 10 years. His work and that of his team gained national and international recognition, with over 60 articles published in União Médica (Medical Union), created by Figueiredo, and other journals from France, Spain, Italy, and the United States from 1883 to 1901.

“The main argument from the first group of doctors to establish pediatrics as its own medical area was that, although the diseases were the same, they evolved differently, because the body of children had its own unique characteristics and demanded other therapeutic approaches,” explains Moreira. In February 1882, Figueiredo proposed that the imperial government set up a course on childhood illnesses. Six months later, a decree was passed authorizing the creation of courses on childhood diseases and surgery in both Empire medical schools—the one in Rio and the one in Salvador, Bahia.

“The appointment of Moncorvo de Figueiredo as chair of childhood diseases and surgery had already been agreed upon by minister Manuel de Souza Dantas [1831–1894], who would forgo the need for a public competition,” noted sociologist Luiz Otavio Ferreira, from COC-FIOCRUZ, in a paper presented at a 2013 history symposium. “It seems, however, that other client interests and regional ties imposed the need for a public competition, which Moncorvo de Figueiredo chose not to enter because he considered himself to be hors concours in pediatrics.” The job at the Rio school was taken by orthopedic surgeon and senator of Bahia Cândido Barata Ribeiro, who had just arrived from Bahia. 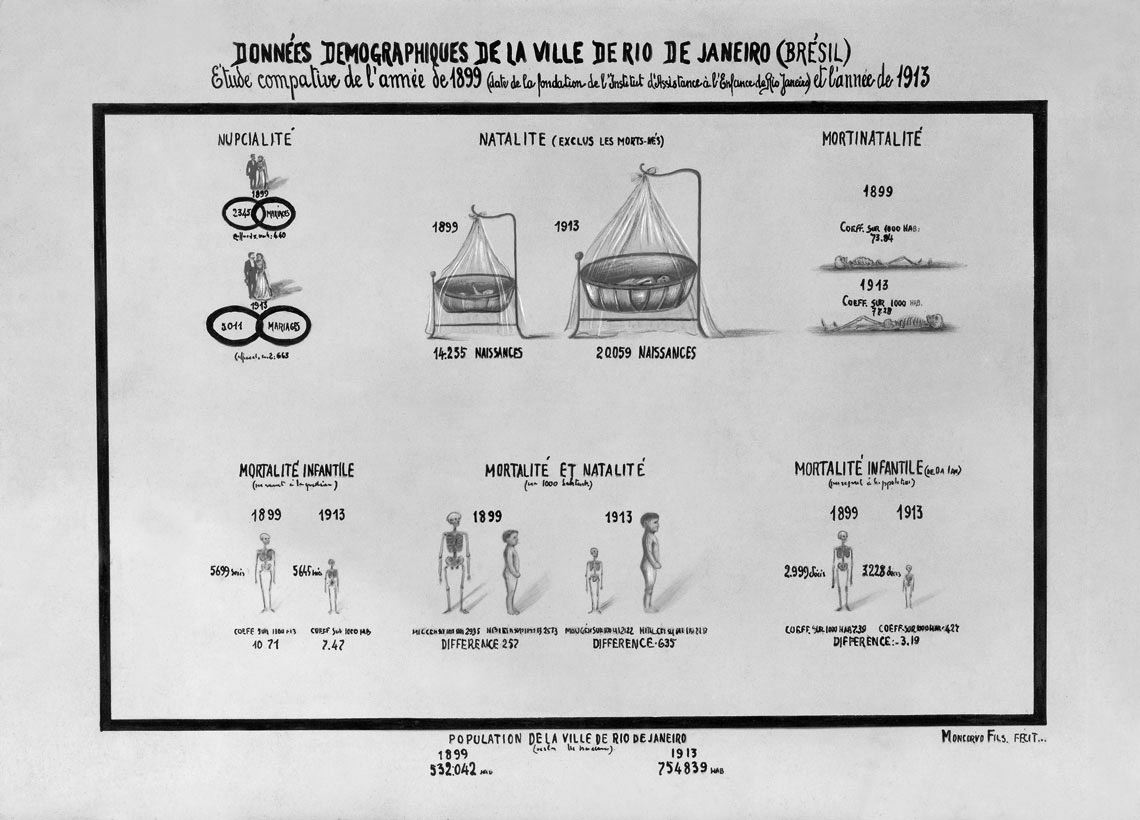 Figueiredo continued to work independently, with a growing group of followers. The theoretical and practical courses of the General Polyclinic trained doctors who went on to develop pediatrics in Rio and bring it into other states. They include Rio natives Antonio Fernandes Figueira (1863–1928) and Carlos Arthur Moncorvo Filho (1871–1944), Pernambuco native Luiz Barbosa (1870–1949), and Rio Grande do Sul physician Olympio Olinto de Oliveira (1866–1956).

An amateur historian, a member of the Brazilian Historic and Geographic Institute, and a poet—who published under a pseudonym in Rio newspapers—Fernandes Figueira moved to Simão Pereira, Minas Gerais, due to his poor health, and continued to treat children there. Based on his observations, he wrote a paper about childhood diseases, published in 1895, which won an award from the National Academy of Medicine. In 1903, he released the 632-page book Eléments de semiologie infantile, in French, which established the differences between the diseases of children and adults and earned him an invitation to return to Rio.

As director of the children’s infectious diseases ward at Hospital São Sebastião, in the city of Rio, Figueira implemented an innovation: that mothers should stay with their hospitalized children. For 14 years, he directed a hospital for children, established in the Rio Santa Casa with support from merchants. Then, as head Inspector of Children’s Health for the National Health Department, he founded children’s clinics and day care centers in Rio neighborhoods and in factories. 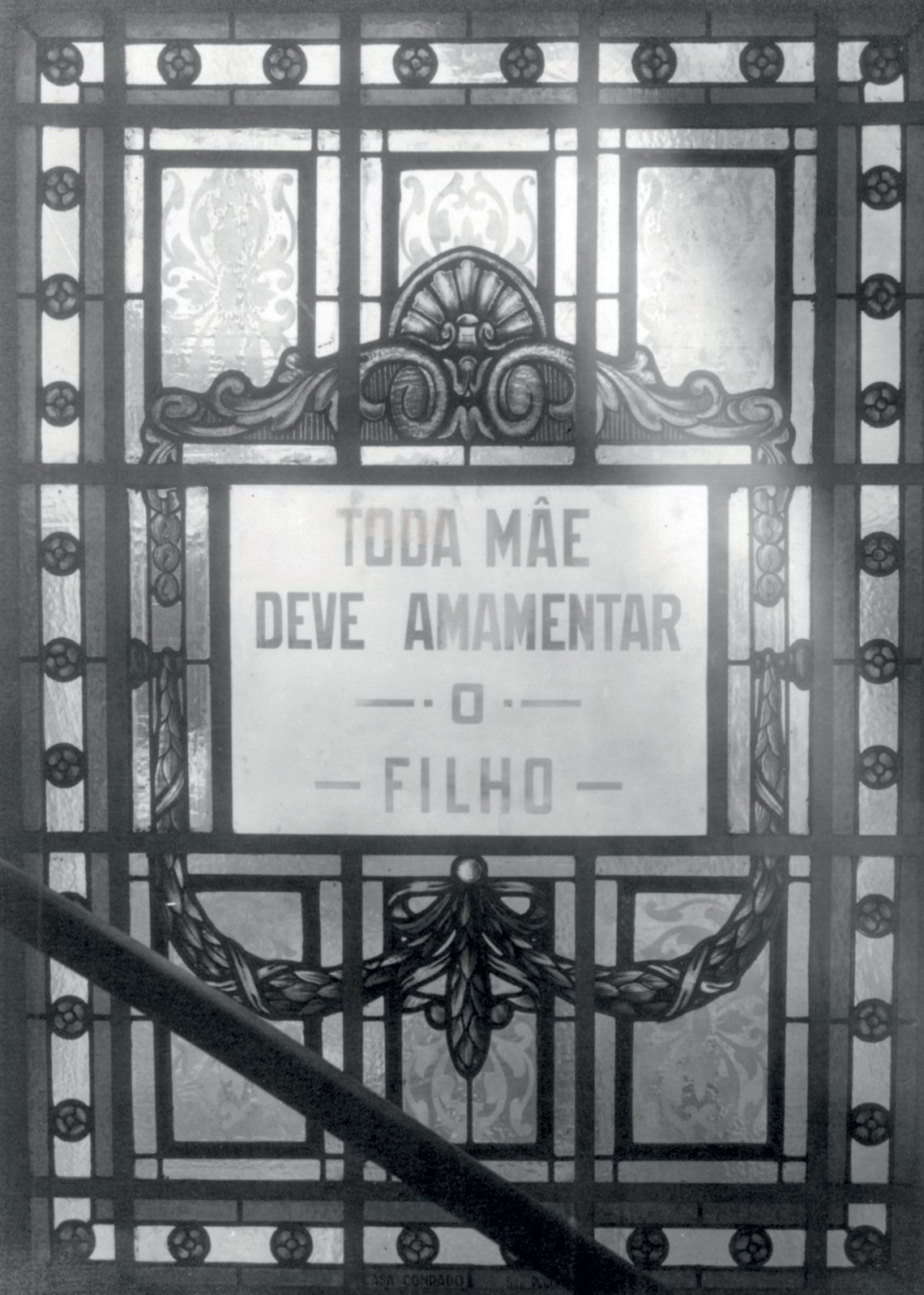 Figueira helped found the Brazilian Society of Pediatrics in 1910 and, in addition to medical papers, he wrote the 1920 book Livro das mães: Consultas práticas de higiene infantil (Guide for mothers: Practical consultations on children’s hygiene), which answered 107 questions from mothers. “Figueira criticized the feeding of newborns using milk from wet nurses and from cows, goats, or donkeys, and advocated instead for breastfeeding by the mother,” says Sanglard, author of Amamentação e políticas para a infância no Brasil: A atuação de Fernandes Figueira, 1902–1928 (Breastfeeding and childhood policies in Brazil: The work of Fernandes Figueira 1902–1928) (Editora FIOCRUZ, 2016).

Pernambuco native, Barbosa, in turn, founded the Botafogo Polyclinic, which opened in 1899 and was funded by philanthropists. At the clinic, he took over as director of child health care after his 6-month-old daughter died of an acute illness. As director of Public Health of the Federal District, he established the Municipal ER, today the Souza Aguiar Municipal Hospital. As a professor of pediatrics at FMRJ, he also helped plan and build the university hospitals.

A direct heir of Figueiredo, who also helped build on his father’s work, “Moncorvo Filho loved statistics,” shares Moreira, from the IFBA. In 1899, he established the Institute for the Protection and Care of Children (IPAI), initially in his own home, to treat sick children and provide social services, giving food to poor families and emphasizing the importance of hygiene and breastfeeding. “He used to argue that the prevention of disease was as important as their treatment,” he says. At IPAI, Moncorvo Filho implemented the practice of puerimetria, to measure what he called the “Brazilian child robustness index,” based on the measurements and weight of about 5,000 children under 14 years old. Based on these records, he invented a device, the puerímetro, to check if a child had a normal growth pattern. 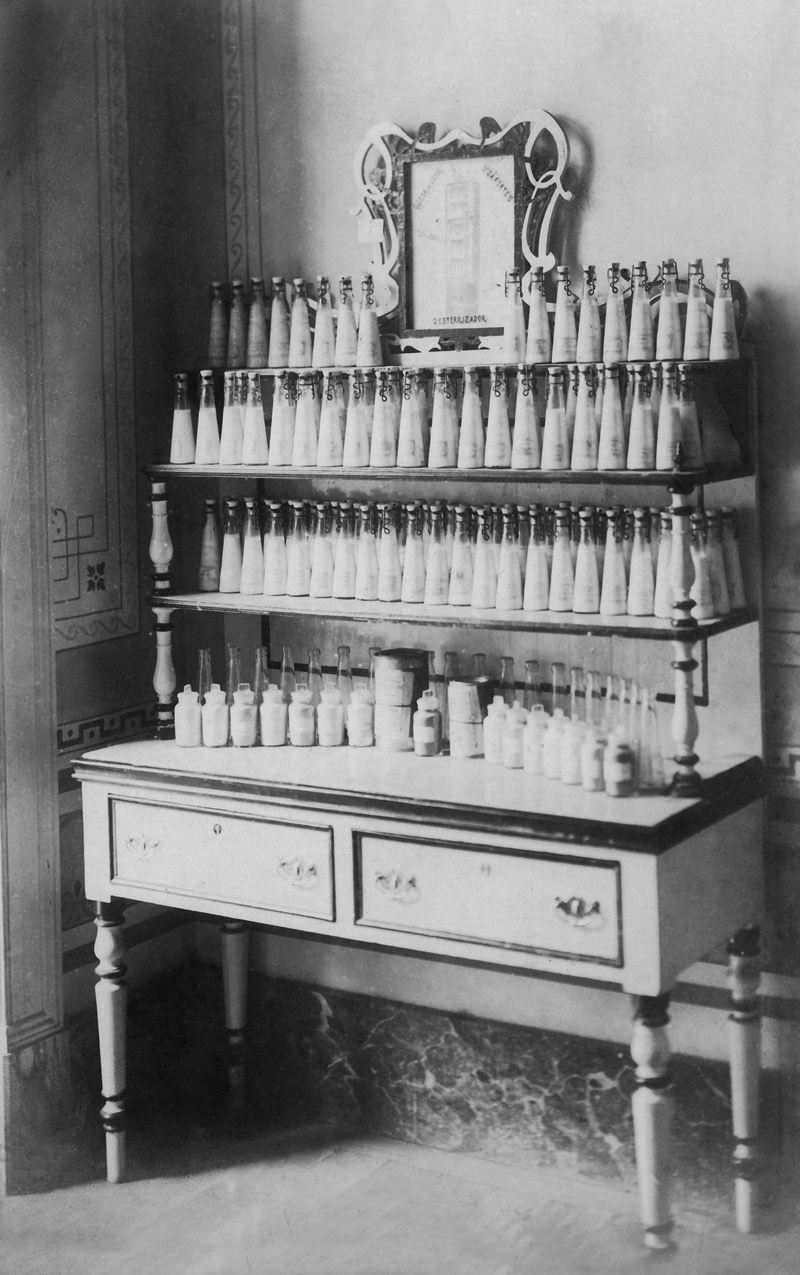 Bahia pediatrician Alfredo Ferreira de Magalhães (1873–1943), a professor at the Bahia Medical School and who also published articles on child diseases, knew his colleagues from Rio, and established a branch of IPAI to offer medical services to poor children in Salvador and built a hospital for children. In Sao Paulo, pediatrics advanced thanks to Rio doctor Clemente Ferreira (1857–1947), who helped in the fight against yellow fever and tuberculosis before directing the state government’s early childhood protection service.

Olympio Oliveira, native of Rio Grande do Sul, opened a clinic for children in the Porto Alegre Santa Casa and taught pediatrics at the Rio Grande do Sul School of Medicine before returning to Rio. Through the federal government, he directed the National Children’s Bureau, established in the 1940s to fight against infant mortality and train doctors in this specialty for public health service.

“Based on their scientific studies, doctors were asked to hold public office positions and implement childcare policies,” notes Moreira. As a result, beginning in 1920, the need for maternal breastfeeding until 6 months of age became consensus; the foundling wheels became rarer before going extinct, in the mid-twentieth century; child labor became illegal; the number of pediatricians in the country grew to 40,000—their current number—and the mortality of children under five years of age fell to 12.4 per 1,000 live births in 2019.