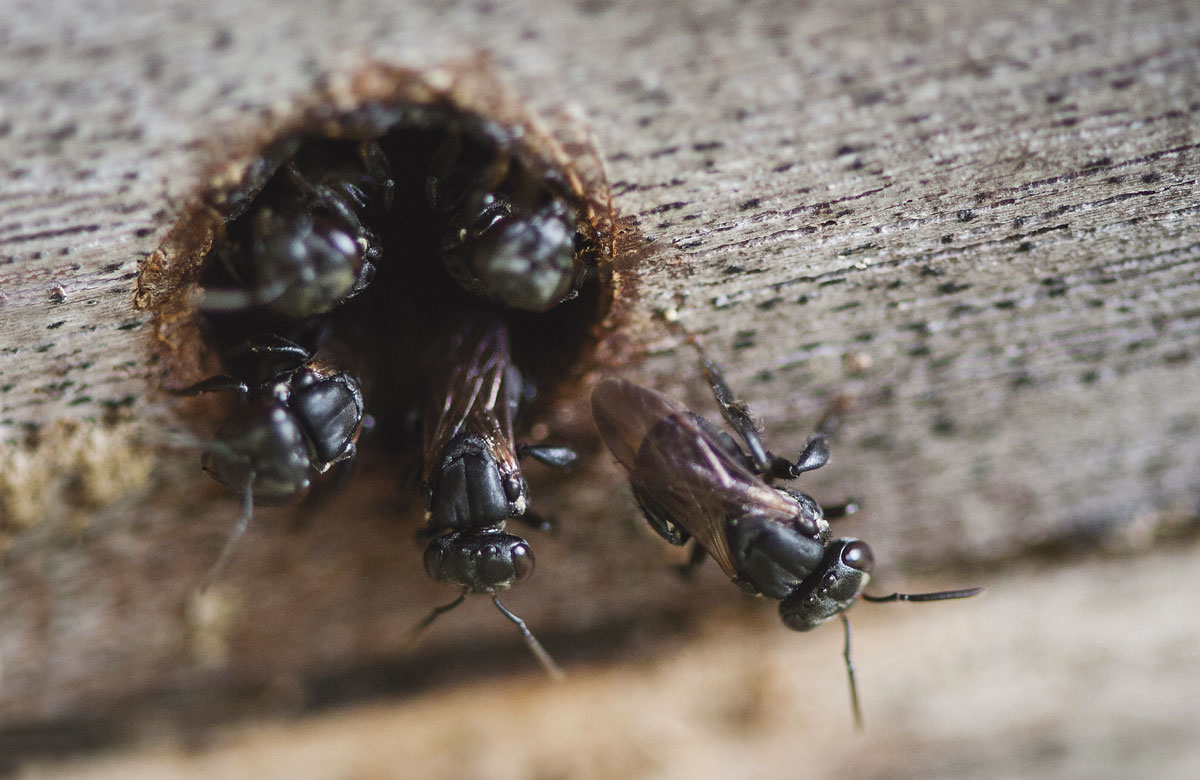 In colonies of the stingless bee Tetragonula carbonaria, queens express fertile status through cuticular hydrocarbons, which suppress the reproductive drive of worker bees

How do social insects such as bees, wasps, ants, and termites recognize each other, organize themselves, and divide tasks in the complete darkness of their colonies? In 2003, when planning his postdoctorate research at the University of São Paulo’s Riberão Preto School of Philosophy, Sciences, and Languages and Literature (FFCLRP-USP), biologist Fábio Santos do Nascimento found that previous genetic analyses and behavioral studies did not provide a satisfactory answer to this question. In search of an answer, he began to study a group of chemical compounds produced by insects known as cuticular hydrocarbons (CHCs), which had already attracted attention from research groups in the United States and Europe. Nascimento and chemist Norberto Peporine Lopes, a professor at the University of São Paulo’s Ribeirão Preto School of Pharmaceutical Sciences (FCFRP-USP), soon found that CHCs signal whether a bee, wasp, ant, or termite is male or female and worker or queen. Each individual, species, and colony exhibits subtle variations in CHC composition that differentiate them from others. These compounds also proved to be crucial for the division of tasks among insect castes and for colony cohesion.

When they release CHCs, queens signal that they are fertile and inhibit the mating drive of workers. These findings were reported in a study by the USP group published in the June 2017 issue of Nature Ecology & Evolution. “It is the chemical signaling induced by queens that keeps the workers dedicated to cleaning and guarding the nest or searching for food,” says Nascimento, who was hired as a professor at FFCLRP-USP in 2009. The teams at Ribeirão Preto also found that queen Melipona scutellaris bees spread CHCs onto the cells where they lay their eggs, signaling that the workers should not touch them.

The CHCs of social insects, which are produced by the subcutaneous glands, form the yellowish wax that covers the external skeleton of the insects. These substances are comprised exclusively of carbon and hydrogen atoms arranged into long, linear structures with single or double bonds between the carbon atoms. “The position of the double bonds between the carbon atoms varies according to the insect species or genus,” says Lopes, “and the variation in the structures of these molecules allows them to recognize individuals from the same hive and permits communication between them.” In 2003, when he began to work with Nascimento, their chemical analysis equipment was suitable for hydrocarbons with up to 40 carbon atoms, but today, they use a new mass spectrometry technique in their lab that allows them to identify even longer carbon chains (60 atoms), which were also seen to differ between males and females and between queens and workers.

Revealing contact
This form of communication relies on physical contact between insects. For example, one ant can recognize that another ant is of the same species or colony by touching its body (particularly its head) with its antennae, which have pores or receptors specifically for identifying CHCs. Thus, the more than one thousand CHCs that have been identified to date are known as superficial or contact pheromones. This classification differentiates these pheromones from sex pheromones, which are released into the air by females that are able to reproduce.

“In their hives, social insects mainly communicate through chemical signals,” says Lopes. “Outside the colony, the primary form of communication between species is visual. If an insect of the same species or another species attempts to invade the anthill, the ants will recognize it as an enemy and attack it immediately.” When light is present, Polistes satan wasps also recognize each other through unique signs on their faces, according to a study conducted by the biologist Ivelize Tannure Nascimento of USP at Ribeirão Preto and published in 2008 in Proceedings of the Royal Society B.

Two days after hatching, the wasps are already producing the colony’s specific CHCs because of their contact with other members of the colony. The composition of these substances may change in response to variations in diet and other factors. Under the guidance of Nascimento, the biologist Lohan Valadares divided a colony of leafcutter ants into two groups: one fed rose leaves and petals, and one given leaves from crepe myrtles (Lagerstroemia sp.), trees with pink flowers that are planted in urban settings. Valadares then transferred ants from one group to the other group; the newcomers were attacked. The analyses indicated that the ants’ smell had changed after their diets were altered. “As the chemical profile of the cuticular hydrocarbons changed, the ants that had been part of the same colony ceased to recognize each other,” says Nascimento.

The ability to produce these compounds must have arisen before their ancestors started living in colonies approximately 100 million years ago. Biologists Ricarda Kather and Stephen Martin of the University of Salford, Manchester, England, examined the chemical profiles of the CHCs of 241 insect species, including 164 species with social habits from the order Hymenoptera, which is the largest insect group with 130,000 species. As they explained in a 2015 study in Journal of Chemical Ecology, the CHC profiles of solitary species were found to be as complex as those of social species.

Another group from England showed that the antennae of Iridomyrmex purpureus ants not only receive chemical signals but also transmit them, building on the observations of Swiss psychiatrist and entomologist Auguste-Henri Forel (1848–1931). At the end of the nineteenth century, Forel removed the antennae from ants of four species and observed that they became disoriented and massed together, revealing that the antennae function as organs capable of capturing chemical signals.

Disoriented ants
Similar to the effects of antennae loss, without CHCs, social insects become disoriented, and social organization breaks down. In the behavior and evolution laboratory at Rockefeller University in the United States, biologist Daniel Kronauer’s team disabled a gene known as orco that produces CHC receptors in Ooceraea biroi ants, which are native to Japan. As soon as they emerged from the larval phase and became adults, the genetically altered ants immediately exhibited strange behavior for this species: They no longer walked in a line but moved aimlessly, as described in a December 2016 article in Proceedings of the National Academy of Sciences (PNAS). The researchers also observed changes in the ants’ brain structures, indicating that these insects require odor receptors for the brain to develop properly.

CHCs explain intriguing social behaviors in insects, far beyond their constant touching of each other with their antennae. “After they get dirty or emerge from water, the ants clean themselves or rinse themselves with their legs as a way of recovering the layer of hydrocarbons that covers their bodies. If they didn’t, the colony’s guards would not recognize them and would not let them enter,” explains Nascimento. Another solved mystery relates to the fact that worker bees of the species Melipona scutellaris decapitate seven-day-old virgin queens that could potentially attract males interested in copulation. By touching the body—mainly the head—of the virgin queens, the workers perceive that their CHCs differ from those of fertilized queens. This perceived difference leads the workers to kill the virgin queens, concludes biologist Edmilson Souza, a professor at the Federal University of Viçosa in Minas Gerais. No major damage is caused to the hive since queens in stingless bee colonies frequently produce eggs that generate queens.

By combining biology and chemistry, these above-described studies complement work on bee genetics begun by the geneticist Warwick Kerr, from São Paulo, in the 1950s and other biological studies on the behavior of social insects began by biologist Vera Imperatriz Fonseca in the 1970s, and they require a multidisciplinary vision from researchers. “Here, in the laboratory,” says Nascimento, “every student and researcher, even biologists, must be a bit of a chemist, learn to use the chromatograph and interpret the results it produces.”

The bright colors of dragonfly wings

The dragonfly Zenithoptera lanei, found in the Cerrado dryland region of northeastern Brazil and known as morpho because of its similarity to the Morpho genus of predominantly blue butterflies, may be the first known insect to have wings in adulthood that are comprised of tissue that is alive and not dead, as previously thought.

The biologist Rhainer Guillermo Ferreira, a professor at the Federal University of São Carlos (UFSCAR), used electron microscopy to identify a network of tubes known as tracheae within the membranes of the intense blue wings of this species.

As described in an article published in the September 2017 issue of Biology Letters, the tracheae vary from 3 to 200 nanometers in diameter and supply oxygen to cells that produce a thick wax that covers the wings. According to Ferreira, the wax reflects ultraviolet radiation, simultaneously accentuating the blue color of the wings and protecting the insect from excessive sunlight. “One of the indications that the wing cells are alive is that the blue quickly loses its brightness after the dragonfly dies,” he says.

The network of tracheae also helps support the wings and control the temperature of these insects. “So far, this is the only species with this type of structure,” he adds. “We looked at 40 other species of dragonflies and did not find anything like this.”