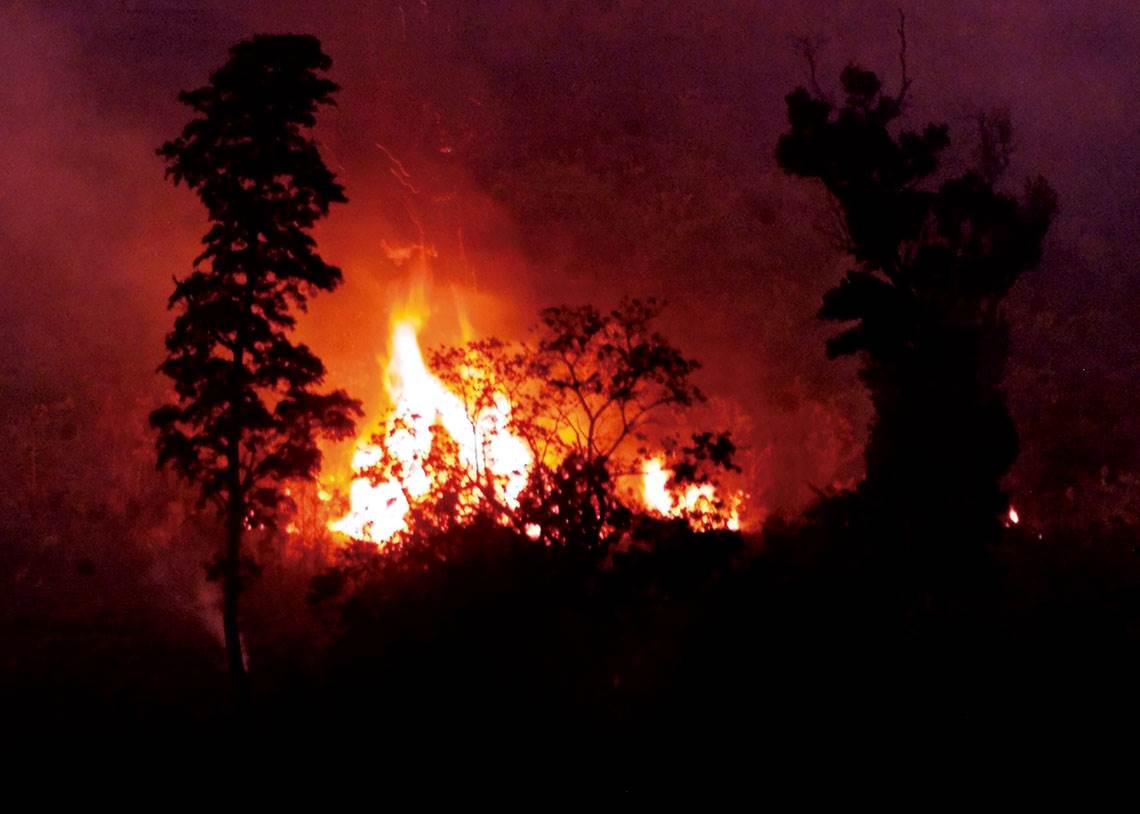 Fueled by dry weather, flames advance through an ecological reserve near Brazlândia, a satellite city of Brasília.

Trees able to resist high-intensity fires—like those that devastated the Pantanal in 2020—suffer a significant reduction in their ability to recover, resprout, and absorb carbon dioxide (CO2) from the atmosphere. As a consequence, native vegetation in burned areas can struggle to regenerate.

Based on satellite data on fires that occurred across the country between 2001 and 2019, researchers from the Federal University of Minas Gerais (UFMG), in collaboration with experts from the University of Brasília (UnB) and the Brazilian National Institute for Space Research (INPE), observed that high-impact fires—the top 10% in terms of intensity, frequency, and area burned—reduced the potential of leaves, especially on trees, to photosynthesize. This decrease was 23% in frequently burned areas in the south and southeast of the Amazon, 19% in the Cerrado (wooded savanna), and 16% in the Pantanal, compared to areas that have never been affected by fires (see map).

In the study, photosynthetic activity and leaf biomass were remotely evaluated over large areas using the normalized difference vegetation index (NDVI), which combines two electromagnetic wavelength ranges (red light and infrared light) from the Modis satellite. This index helps determine the color of leaves: healthy ones are greener and carry out more photosynthesis, while burned ones are red and brown and transform less light energy into carbohydrates.

The lower the photosynthetic activity, the lower the plant’s ability to absorb CO2 and the more difficulty it has producing new leaves. As a result, plant recovery after a fire is slower.

In the Cerrado, however, where natural fires are common, the undergrowth recovers quickly, points out Giselda Durigan, a forest engineer from the Institute for Environmental Research (IPA) who was not involved in the study. In dry environments such as the savannas of Africa and Australia and the Brazilian Cerrado, fires of natural origin help renew vegetation and encourage natural selection of resistant species. Tree trunks are coated with a thick layer of cork, fruits have thick skins, and seeds only germinate after being burned (see Pesquisa FAPESP issue nºs. 291 and 309).

“The reduced rate of photosynthesis and consequent physiological stress are greater in the Amazon because there are fewer fire-resistant species, but it also occurs in the Cerrado, where the plants are adapted to low-intensity fires but not to high-intensity ones,”, says Britaldo Soares-Filho, a UFMG geologist who specializes in environmental modeling, one of the authors of the paper describing the results, published in the scientific journal Frontiers in Forest and Climate Change in March. “In the Cerrado, more intense fires become destructive rather than regenerative.”

Durigan notes that the damage is sometimes reversible: “It is an undesirable simplification to say that in the Cerrado, high-intensity fires are destructive or that the biome is not adapted to them.” According to her, such notions can imply that an area that has suffered from a high-intensity fire is destroyed beyond repair, has no value, and can be replaced by crops such as soybeans.

An analysis of 12,200 images by UFMG biologist Ubirajara Oliveira indicated that the Pantanal was the biome that experiences the most natural or manmade fires, in proportional terms. Fires have consumed 45% of the Pantanal, 34% of the Cerrado, 9% of the Amazon, 8.2% of the Atlantic Forest, 5.6% of the Caatinga (semiarid scrublands), and 1.8% of the Pampas. High-impact fires affected a smaller area. They accounted for 16.5% of the entire burned area in the Pantanal, 8.8% in the Cerrado, and 6.3% in the Amazon, mainly in fragments of native vegetation in areas that have been deforested over the last 20 years. The most intense fires were not recorded in the other biomes.

“Natural fires caused by lightning represent a small fraction of the total—they are low in intensity and occur mainly in the Cerrado at the beginning of the rainy season,” highlights Soares-Filho. “In the Amazon, the vast majority of fires are started deliberately after deforestation, to remove native vegetation from areas that are intended to be used for livestock or agriculture.”

Soares-Filho leads a project funded by the Forest Investment Program (FIP – Cerrado Monitoring), which identifies fire risks in seven national parks in the biome, based on daily information provided by the Sentinel satellite. With further financial support from Brazil’s Ministry of Science, Technology, and Innovation (MCTI) and the World Bank, the project includes teams from the Chico Mendes Institute for Biodiversity Conservation (ICMBio) to prevent and fight forest fires. “National parks are often huge—firefighters can take days to reach a fire,” he explains.

A UFMG study published in the journal Forest Policy and Economics in June 2021 suggested that fire prevention and burning vegetation through a more controlled approach to protect the most sensitive areas reduced the burned area in those seven Cerrado conservation units by 12% between 2012 and 2016. “This type of fire management, which has a local effect, is not enough,” argues Soares-Filho. “We must improve oversight and stop fires started illegally.” The situation could yet worsen. A paper published in Frontiers in Forest and Climate Change this year estimated that even under moderate climate change, high-impact fires are expected to increase by 97% in the Amazon, 95% in the Cerrado, and 74% in the Pantanal by 2050.

“Forecasts always have limitations, but the trend really is toward an increase in the occurrence of fires worldwide, as warned in the most recent IPCC [Intergovernmental Panel on Climate Change] report, issued in August 2021,” says IPA botanist Giuliano Locosselli.

“We are struggling to reduce emissions of CO2, which fires release in large quantities,” he adds. “In turn, this CO2 raises the temperature, leading to more fires, which emit even more of the gas.”