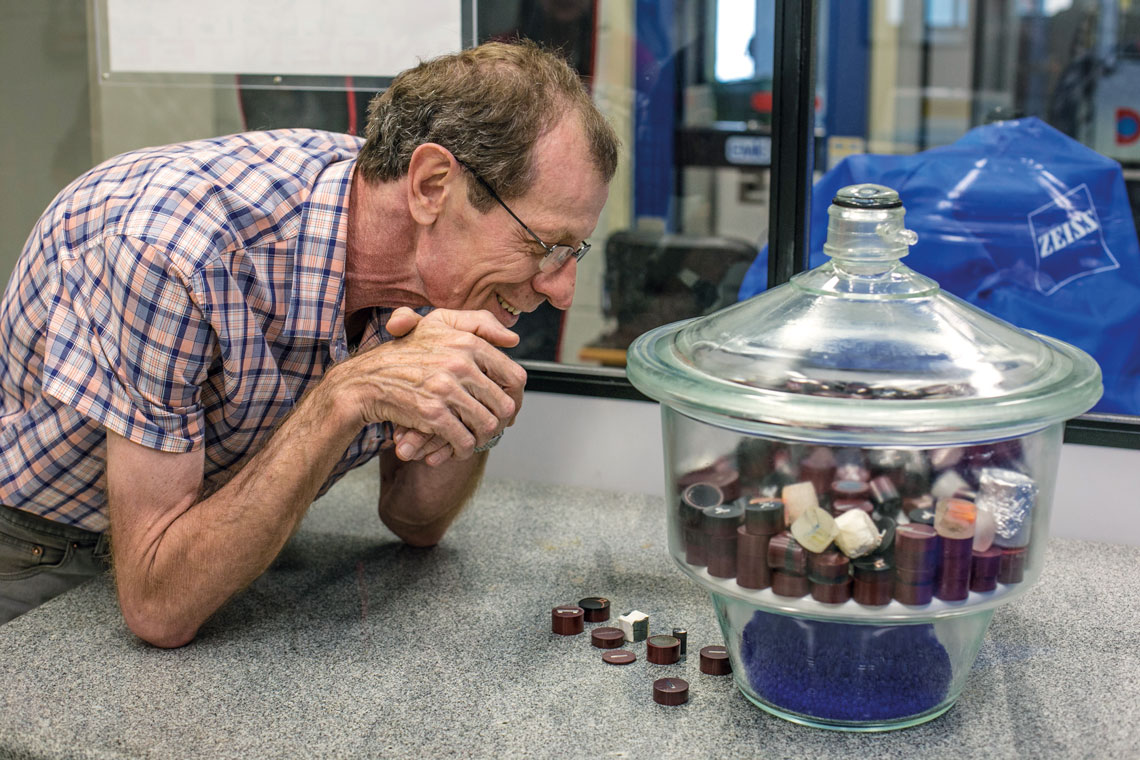 The physicist analyzes metal samples at the LNLS materials laboratory, in 2014

While away undergoing health treatment, engineer and physicist Antonio Ricardo Droher Rodrigues missed the first electron loop around the Sirius ring, the new Brazilian synchrotron light source, on November 25, 2019. He was also not present when the team was able to store electrons in the accelerator for several hours, on December 14 of that same year. But he was there for a photo two days later, when the team was first able to generate enough current to bring synchrotron light to one of the future experimental stations of Sirius. “We did it for him. And he was very happy,” shares Antonio José Roque da Silva, director general of the Brazilian Center for Research in Energy and Materials (CNPEM), located in Campinas. The physicist died on January 3, at the age of 68, of lung cancer. Born in Curitiba, in the state of Paraná, he was married to Liu Lin, leader of the LNLS Accelerator Physics Group, and is survived by her and their three children: Erica, Kevin, and Ian.

Rodrigues obtained his undergraduate degree in civil engineering from the Federal University of Paraná (UFPR) and a PhD in physics from King’s College London. He was in charge of designing the synchrotron accelerator not only for Sirius, but also for UVX, the first in the southern hemisphere, launched in 1997. Both are located at the National Synchrotron Light Laboratory (LNLS), at CNPEM. “Ricardo was a brilliant engineer, and the main contributor to the design of the first UVX synchrotron. He was also the one who designed Sirius and directed the operations that led to its success as a great instrument for science, entirely designed and largely [80%] built in Brazil,” declares Rogério Cezar Cerqueira Leite, president of the CNPEM council. “Furthermore, he was always a committed, kind, and modest researcher. In short, an exemplary scientist and citizen.”

Direct PhD
“I’ve met a lot of exceptional people, but I’ve never seen such technical intelligence and creative ability as his,” shares physicist Cylon Gonçalves da Silva, who led the UVX construction project in the early 1980s, and ran the LNLS from 1986 to 1998. “He was not vain, but he knew his worth. As a leader, he was extraordinary because of his generosity.” Two years into his civil engineering undergraduate program at UFPR, Ricardo Rodrigues began studying X-ray optics, supervised by Cesar Cusatis, coordinator of the Laboratory of X-Ray Optics and Instrumentation of the Physics Department. “He was an exceptional person,” recalls Cusati. “Immediately after graduating, he was accepted into the PhD program at King’s College, with Michael Hart, the inventor of the X-ray interferometer, as his advisor,” he adds. “When he returned to Paraná, he was a fundamental asset for our laboratory.”

Three years later, he transferred to the São Carlos Institute of Physics, at the University of São Paulo (IFSC-USP). “As an engineer, his approach was practical; he was interested in electronics and, during his undergraduate program, he began scientific research in the areas of optics and X-ray instrumentation,” says the director general of CNPEM. When Roberto Lobo, then president of the Brazilian Center for Physics Research, began to put together the Executive Committee of the Synchrotron Radiation Project―which would give rise to both the first Brazilian synchrotron and the LNLS―Rodrigues was a natural candidate. “All it took was to say that a project was difficult, and he would take the bait,” recalls Cylon Gonçalves.

Off to Stanford
Rodrigues joined the executive committee of the project in October 1983. Two years later, at the age of 33, he led the team of engineers and physicists that developed the accelerator ring project at the Stanford Synchrotron Radiation Laboratory (SSRL), in the United States, under the direction of Helmut Wiedemann. “No one knew how to do this in Brazil, so we went there to learn,” shared Rodrigues himself, in an interview with the website O Mundo da Usinagem, in 2019. When construction started for the UVX, in 1986, the physicist was already known as the “machine man,” claims Marcelo Baumann Burgos in the book Ciência na periferia: A luz síncrotron brasileira [Marginalized Science: Synchroton Light in Brazil] (published by UFJF, in 1999). A year later, he became head of the Projects Division at the newly created LNLS.

The UVX was launched in 1997. Four years later, when Gonçalves stepped down as head of LNLS, Rodrigues resigned. “After 15 years of intense work, we were all exhausted,” recalls Gonçalves. After leaving LNLS, in 2002, Rodrigues decided to become an entrepreneur. Along with Liu Lin and electronics technician Carlos Scorzato, a friend from his UFPR days, he set up Skedio Tecnologia. “The idea was to produce instrumentation,” says Scorzato. The company developed civil construction controls, cardiac defibrillators, gauges, industrial pressure sensors, among other items.

New synchrotron
In 2009, the physicist returned to LNLS, following an invitation from José Roque da Silva, who had just become director of the laboratory and was committed to starting the project to build the new synchrotron. After a two-hour lunch, he said yes. “He asked me if building the first synchrotron had been worth it. I replied that UVX was instrumental in training people for a more competitive leap with a new machine. In addition, it was a chance for him to fulfill his dream of producing cutting-edge equipment,” says the director general of CNPEM.

When he began the Sirius project, Rodrigues was, once again, the right man in the right place. The fourth generation synchrotron was created with state-of-the-art technology, comparable only to the Max IV, launched in 2016 in Sweden. “The initial project was to make a third-generation machine; then the committee assessed that the world was ready for the fourth-generation. In one month, we completely redesigned the machine’s optical design and changed the vacuum chamber, which needed to be made of copper. It was a good warm-up. Today, our machine is better than that of Max IV,” stated Rodrigues when interviewed by O Mundo da Usinagem. He led the LNLS team in redesigning the magnetic grid, so that the glow from Sirius was the most intense of all the synchrotrons in operation.

The new machine, which should start operating this year, will enable scientists to produce competitive research. The first six experimental research stations―X-ray nanoscopy, micro and macromolecular nanocrystallography, for example―were selected to meet both the new demands of science and technology and to allow the advancement of research in strategic fields, such as oil and gas, healthcare, and others.