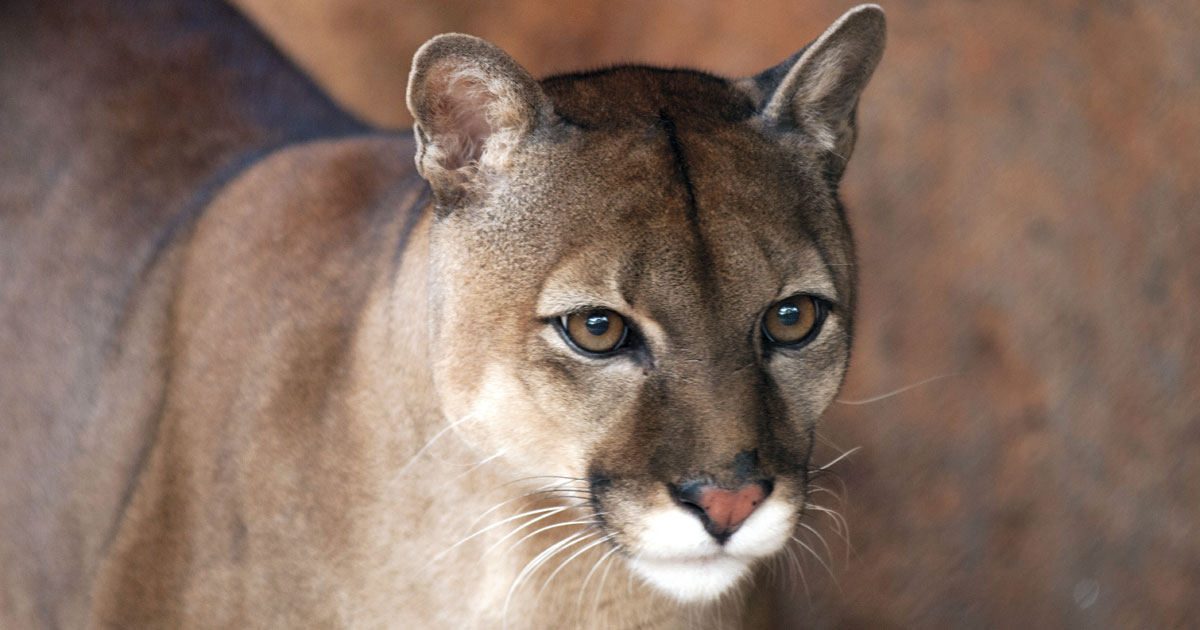 The cougar, which has adapted to large and small areas of forest

Large animals have become scarcer and smaller ones are now predominant, but there have been virtually no global extinctions in the Atlantic Forest according to studies based on the Atlantic Series, a database developed by nearly 400 biologists, ecologists, and forest engineers from Brazil and other countries. By consolidating biological data from museum collections, scientific articles, field studies, online databases, master’s dissertations, doctoral theses, technical reports, and field inventories (some published and others not), the researchers also observed that large and small mammals and birds have demonstrated a certain resilience—an ability to adapt—to the extreme fragmentation of the Atlantic Forest. The coastal forest, which also occupies the states of São Paulo and Minas Gerais, is today about 15% of the size it is estimated to have been five centuries ago when European colonization began, and it is divided into hundreds of smaller areas, most measuring less than one square kilometer.

“Despite having reduced in size by 85%, there has been no mass extinction event in the Atlantic Forest, at least not yet,” says biologist Mauro Galetti, a professor at São Paulo State University (UNESP) Rio Claro campus and one of the coordinators of the project. “There have been local extinctions, such as the southern muriqui (Brachyteles arachnoides), which used to be found across most of the Atlantic Forest and today is very rare, but we found very few global extinctions among the 2,000 species examined.” Three bird species—the Pernambuco pygmy owl (Glaucidium moorerorum), the purple-winged ground dove (Claravis geoffroyi), and the kinglet calyptura (Calyptura cristata)—have not been sighted for more than 20 years and have probably disappeared. Among the amphibians, the only species presumed extinct is the spiny-knee leaf frog (Phrynomedusa fimbriata), seen only in the Paranapiacaba mountains in 1896 and described in 1923.

The harpy eagle: 12 individuals were recorded in the region of studyRicardo Kuehn / Folhapress

Fewer large animals
The studies of the Atlantic Series found that the number of large mammals and birds is falling. The jaguar, peccary (Tayassu pecari), bush dog (Speothos venaticus), harpy eagle (Harpy harpyja), toucan, and forest hawk populations in the Atlantic Forest have decreased as they lose territory or are hunted by humans. Large tree species have become scarcer as a result, says ecologist Milton Ribeiro, a professor at UNESP in Rio Claro, because they rely on such animals to carry their large seeds to places where they can germinate without competition from other trees of the same species.

Biologist Fernando Lima, a researcher at UNESP and the Institute for Technological Research (IPÊ), studied jaguar populations with colleagues from institutions in Brazil and Argentina. The only places they found groups of jaguars larger than 50 in number were the forests of Serra do Mar in Upper Paraná and Paranapanema (western São Paulo) in Brazil, and Misiones in Argentina. “There are very few jaguar populations, none of which are larger than 300 individuals, and they are very isolated, which is putting the species at risk,” Lima says. Because they are so rare, the jaguar is no longer the top predator in the ecological chain, and as a consequence, medium-sized competitors such as the cougar and the ocelot (Leopardus pardalis) have thrived, with unpredictable effects on the populations of common prey such as capybaras (Hydrochoerus hydrochaeris) and peccaries (Pecari tajacu and Tayassu pecari).

The Atlantic Series collates data on the locations and population levels of 296 species of mammal (large and small, from bats to primates), 832 birds, 528 amphibians, and 279 butterflies, with tens of thousands of geographic records for each group. The scientific results derived from this database are being published in the scientific journal Ecology, and the lists of species with their locations and population levels are included in the appendices of each paper and on a website created by the UNESP research group (bit.ly/MataAtlanticA).

The studies show which species are most abundant and which are rarest. Among the large mammals recorded by camera traps, the most commonly seen in the forest is the domestic dog (Canis familiaris). The rarest, meanwhile, include the black-faced lion tamarin (Leontopithecus caissara), with 34 individuals recorded, and the blond capuchin (Sapajus flavius), with 44 recorded across the Atlantic Forest.

The capororoca tree is the champion disperser: 38 bird and mammal species feed on its fruit

The studies also help to identify relationships between animals and plants in the region. In June 2017, the first of the six articles published so far described 8,320 interactions, usually related to feeding, between 331 animals (birds, mammals, fish, amphibians, and reptiles) and 788 plant species. One that stood out was a type of tree found on the slopes and banks of streams. The capororoca (Myrsine coriacea) had the largest number of dispersers of all trees in the region: its fruit attracted 83 animal species, including howler monkeys, blue jays, penelopes, thrush, and other birds. Meanwhile, the muriqui monkey (Brachyteles arachnoides) and the rufous-bellied thrush (Turdus rufiventris) were identified as the frugivores (species for which fruit is the preferred food type) with the most diverse diets, feeding on the fruit of 137 and 121 plants species respectively. “Understanding the relationships between fauna and flora, such as frugivory, herbivory, dispersion, and pollination, is fundamental to defining the functional species groups to be used in reforestation,” says biologist Ricardo Rodrigues, from the Luiz de Queiroz School of Agriculture at the University of São Paulo (ESALQ-USP), who did not participate in the research.

Ecologist Jean Paul Metzger, a professor at USP’s Institute of Biosciences and one of the coauthors of the paper, notes that the database is also a great source for studies on population variation, species locations, and interactions between animal and plant communities. “By studying this data, we can test a series of new hypotheses, such as the link between the extinctions of certain fauna and that of large trees, which has led to a reduction of forest biomass,” he suggests.

“With the Atlantic Series data,” Galetti adds, “we can try to understand how some species are able to survive, even in the face of extreme forest fragmentation.” According to him, there is little research on the ability of animals to adapt to smaller areas where light levels and climates differ, known as phenotypic and behavioral plasticity. The cougar (Puma concolor) can live in forests, eucalyptus plantations, and cane fields, and feeds on of all kinds animals—from mice to cattle. The jaguar (Panthera onca), on the other hand, despite being able to live in closed and open forests such as the Cerrado and the Caatinga, needs large spaces and large prey such as tapirs and peccaries.

Capybaras, whose numbers could increase as populations of large predators declineEduardo Cesar

Gradually, the Atlantic Forest has become better suited to small animals, which are now hyperdominant. Hyperdominance refers to a situation in which a small number of species account for at least half of the flora or fauna in an area. Among the 124 species of small mammals, the big-eared opossum (Didelphis aurita) and the black-footed pygmy rice rat (Oligoryzomys nigripes) predominate. “Hyperdominance is a result of fragmentation, because certain species adapt better to smaller areas, but we do not know to what extent,” says Galetti. “The possibility that this is a general pattern in tropical forests could open a vast field of research in an effort to understand how a species becomes hyperdominant.” A 2013 study published in the journal Science indicated that of the 16,000 tree species found in the Amazon, 227 (1.4% of the total) are hyperdominant, while another 11,000 account for just 0.1% of the total.

Two centuries of bird records
A study on birds in the region, coordinated by biologist Erica Hasui, a professor at the Federal University of Alfenas, Minas Gerais, was published in February and offers a broader perspective than the other papers based on the Atlantic Series. The study examined 183,814 records of 832 species collected from 4,222 locations between 1815 and 2017. Based on this information, Hasui and biologist Luis Fábio Silveira, curator of ornithology at the USP Museum of Zoology, verified that the black-fronted piping guan (Aburria jacutinga), which in the 1800s was found in forests across almost all of southeast Brazil, now lives only in the Atlantic Forest’s largest fragments, located primarily in São Paulo State.

The inventory contains just 12 records of harpy eagles, all in large areas of Atlantic Forest: the oldest record is from Cantagalo, Rio de Janeiro, in 1850, and the most recent was in Iporanga, São Paulo, in 1992. There are also records from the late nineteenth century of now-rare species found in parts of the city of São Paulo, such as the São Paulo tyrannulet (Phylloscartes paulista), a gray bird with a yellow chest that grows up to 10 cm in length, which was observed in the neighborhoods of Santo Amaro and Ipiranga in 1897 and 1899 respectively.

The black-faced lion tamarin is the rarest monkey in the Atlantic Forest, with just 34 recorded individualsPaulo Gil / Zoosp

Other studies based on the database are expected to be published by the end of the year, including analyses of amphibians, butterflies, primates, ants, pollinators, and trees. Finnish ecologist Otso Ovaskainen, from the University of Helsinki, Finland, encouraged Brazilian biologists to pool their data in 2015, and commented on the new scientific literature now being produced: “It is fantastic that all of this data is now accessible to researchers working on tropical ecology. It is especially important to understanding the impact humans have had on these ecosystems, through forest fragmentation and deforestation, for example. The possibility of combining this information in different ways is very exciting,” he said.