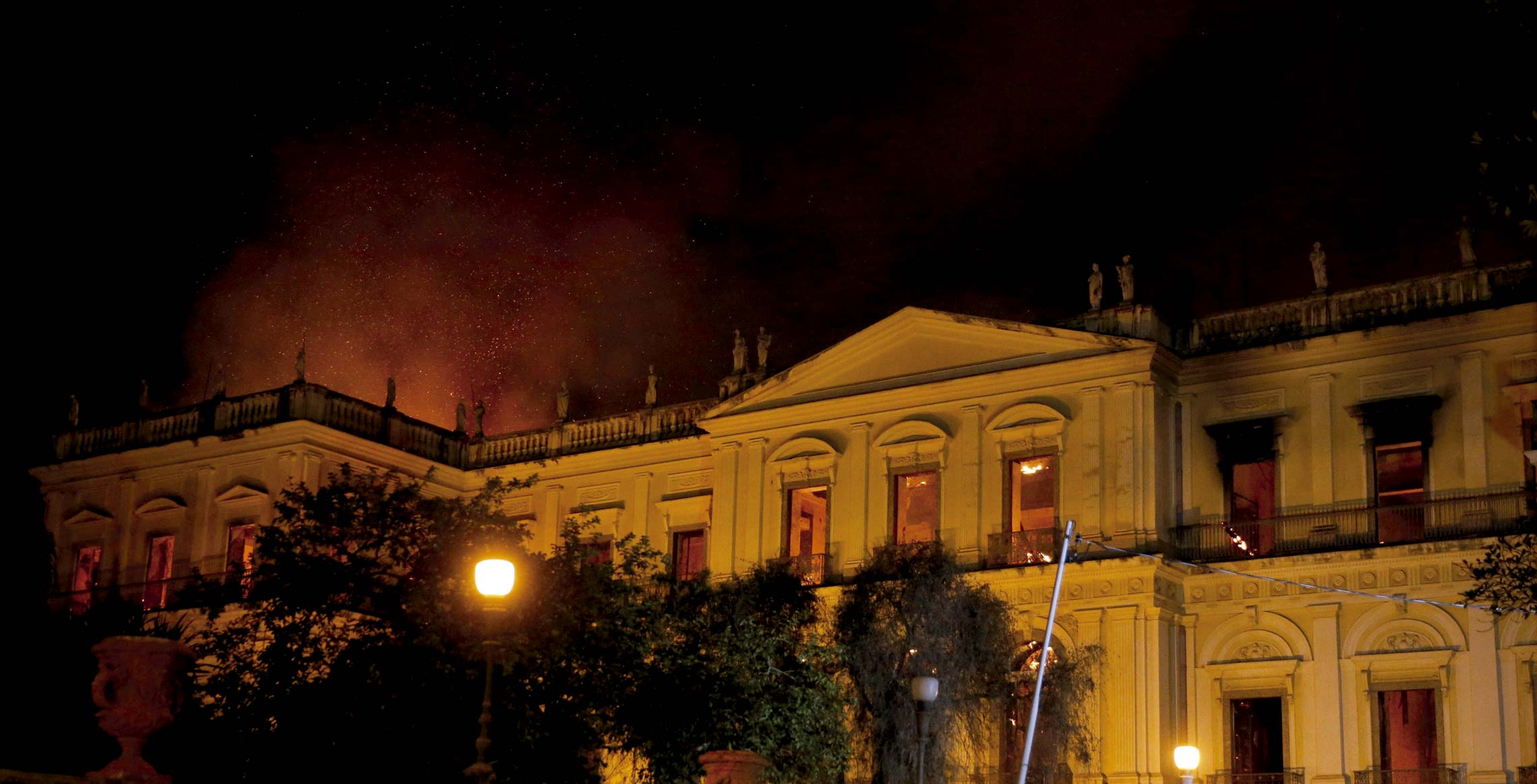 The São Cristóvão Palace, home to the National Museum, on the night of September 2

The National Museum closed for the day at 4 p.m. on a warm, September 2, Sunday afternoon in Rio de Janeiro. One hour later, the last lingering visitors exited the 13,600 square-meter compound, a palace built in the nineteenth century as the official residence of the Brazilian monarchy at Quinta da Boa Vista, now a municipal park on the north side of the city. At 7:30 p.m., museum staff called the Fire Department. A fire that had apparently begun on the second floor threatened to overtake the historical building. Some researchers tried to enter the building to salvage their materials, but the fire soon spread out of control and by 10:00 p.m. had buried the largest collection of natural history, archaeology, and indigenous and African cultures in Latin America, with more than 20 million items, under ashes and rubble.

The fire raged on for six hours before it was extinguished, destroying a precious wealth of heritage. About 2 million items were in other buildings of the compound and were spared. The exterior walls of the historic building—visit-worthy in itself—withstood the blaze, but much of the roof collapsed, and entire floors caved in. It is possible that salvageable items will yet be found in more fire-resistant cabinets housed in less-affected parts of the building. Hopes are high that at least some items of irreplaceable historical and scientific value will be recovered. Among the most important items are an 11,000-year-old skull dubbed Luzia, one of the oldest human fossils in the Americas; sarcophagi and mummies brought to Brazil by emperor Pedro II; artifacts from the African kingdom of Dahomey that had been donated to the Brazilian imperial family; and a collection of items from Pompeii, the Roman city destroyed by the eruption of Vesuvius almost 2,000 years ago.

Identifying and restoring these objects as part of an archaeological heritage preservation project led by museum staff will be the third and last step in the recovery effort. The first—which has already begun, and for which the Brazilian Ministry of Education has provided funding of R$9 million—will involve installing perimeter fencing, erecting a temporary roof, and shoring the walls. This will secure the site for the Federal Police to conduct an investigation before the building is turned over to the search team. Reconstructing the building, and the collection itself, will be the next step.

In the days following the tragedy, museums in Brazil and around the world offered to donate items to help rebuild the collection. Images of the museum’s now-lost specimens are being compiled to preserve the memory of what was lost and hopefully recreate items using 3D printers. The United Nations Organization for Education, Science, and Culture (UNESCO) has announced that its network of geoparks—or protected geological heritage areas—around the world will collect items to donate to the museum’s collection. UNESCO has also pledged to support efforts in the coming months to identify items of scientific value under the rubble.

Funding for reconstruction, to the tune of at least R$50 million, in a project lasting at least three years, has yet to be obtained. For several years there had been plans to build a dedicated building to house the entire collection, leaving the main building for exhibitions only, but museum officials were unable to secure the necessary funding. Fire protection systems were nonexistent in the palace. In June, the Federal University of Rio de Janeiro (UFRJ), which runs the museum, the Association of Friends of the National Museum, and the Brazilian Development Bank (BNDES) had signed an agreement under which the institution would receive R$21.7 million to start a modernization project, but due to restrictions imposed by electoral law, the funds could only be disbursed in November, and will now likely be channeled to the emergency works. Rebuilding the collection itself will be a much costlier effort, lasting at least a decade.