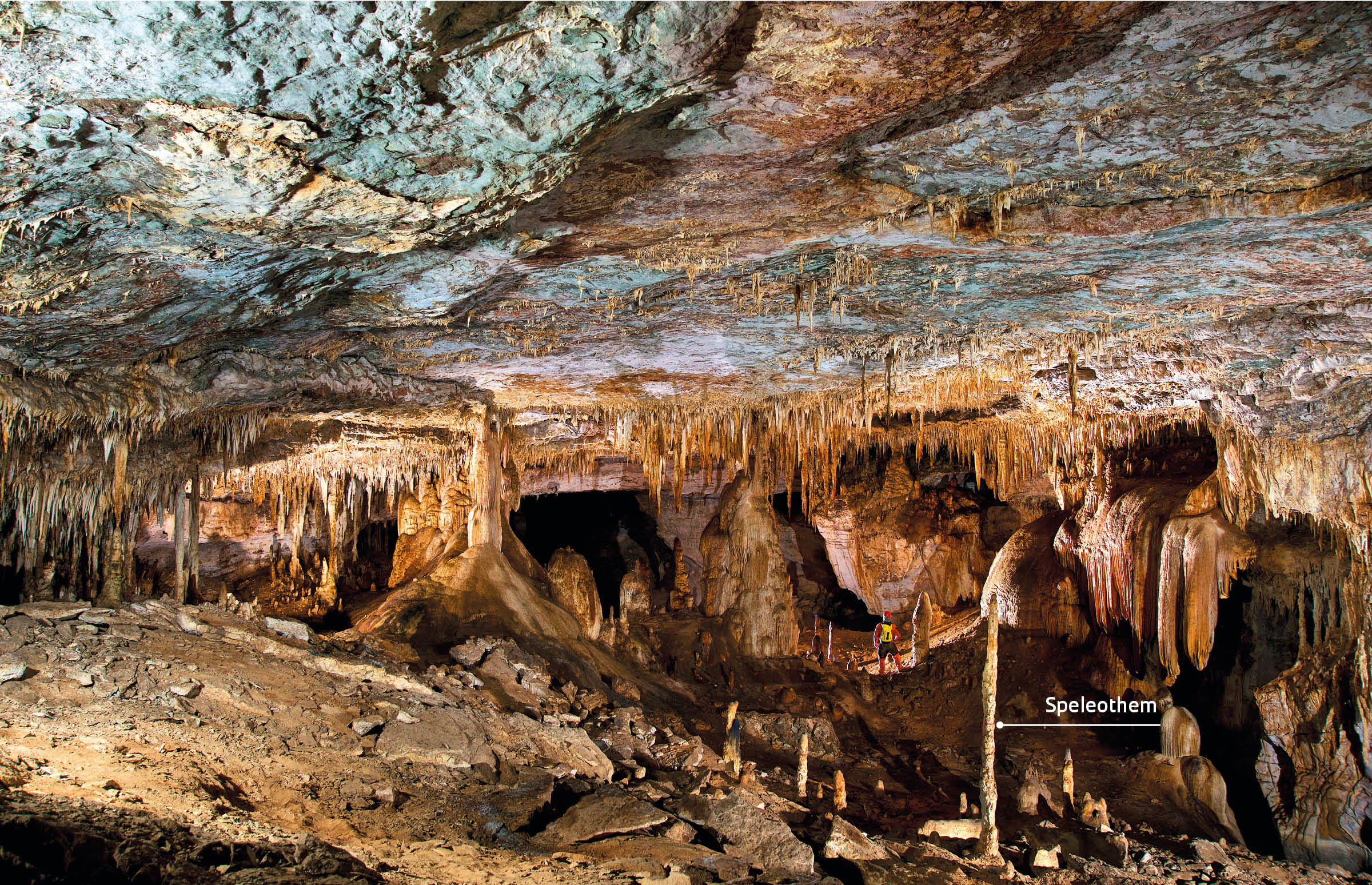 One of the galleries of the Toca da Boa Vista cave in Bahia, where speleothems are formed by limestone-rich water dripping from the ceiling of the cave

Between 120,000 and 12,000 years ago, the global climate was far colder than it is today. In both winter and summer, average temperatures around the North Pole were about 16 degrees Celsius (°C) lower than today. The cold was not continuous and uniform over these 108,000 years, however. There were 26 periods when the temperature dropped a further 10°C, during which glaciers covered much of the land that currently forms North America, northern Europe, and Asia. Six of these periods are particularly special. Named Heinrich events after Hartmut Heinrich, the German geologist and climatologist who described them in 1988, they were marked by an even more drastic and abrupt cooling. In a matter of years, temperatures dropped even further and glaciers advanced towards the equator, with icebergs reaching as far south as the Iberian Peninsula and northern Africa.

During these Heinrich events, which lasted from hundreds to thousands of years, heavier snowfall caused continental glaciers and ice shelves to break up as they advanced across the sea, launching an armada of icebergs into the subtropical regions of the North Atlantic. The climate in South America was also affected, with low global temperatures and changes to the ocean’s salinity altering how heat was transported to regions north of the equator and modifying the circulation of winds that carry humidity. But the changes were less radical. Temperatures were 5°C lower than today and there was no formation of glaciers, but there was significantly more rainfall. At times, the area that today is central and eastern Brazil was so wet for so long that parts of the Atlantic Forest in the Northeast expanded far enough to meet the Amazon rainforest.

“Heinrich events certainly intensified rainfall in central and eastern Brazil,” says geologist Nicolás Stríkis, from Fluminense Federal University (UFF) in Rio de Janeiro. Stríkis and his colleagues from Brazil and abroad presented their conclusions in an article published in the scientific journal PNAS in early April. They found evidence of greater rainfall in the central-eastern region of Brazil during Heinrich events by analyzing rocks formed in caves in the states of Minas Gerais and Bahia over the last 100,000 years. The water from the rivers and rainfall seeps through the roof of the limestone caves and dissolves the rock, which solidifies again as it hits the ground below, forming speleothems. These rock formations grow larger as rainfall increases, and they store chemical information about the water and limestone in the period during which they were formed, allowing scientists to reconstruct the climate of the past.

During his PhD at the Institute of Geosciences of the University of São Paulo (IGC-USP), which he completed in 2015, Stríkis and his supervisor Francisco William da Cruz Junior collected about 50 speleothems from the Lapa Grande and Lapa Sem Fim caves in the Cerrado (savanna) region of northern Minas Gerais, and from the Paixão and Marota caves in the Cerrado of Bahia. They measured the ratio of two oxygen isotopes found in 6,000 water and limestone samples taken from 13 speleothems and used this data to recreate a hydrological profile of the region over the last 85,000 years.

Filipa Naughton, a paleoclimate expert from the Portuguese Institute for Sea and Atmosphere (IPMA), helped the Brazilians compare the dates of the wettest periods in central and eastern Brazil with those of Heinrich events in the North Atlantic. As the icebergs that formed in times of extreme cold melted, thicker sediments (from fine to coarse sand) covered the thin mud of the ocean floor; marine sediment collected in northern Portugal in 1995 contains traces of icebergs from six Heinrich events, which coincide with the coldest periods of the last glacial period.

“In South America, Heinrich events generated major climate changes, where environments may have transformed from dry to wet within just a few decades,” explains Cruz. The speleothems from Minas Gerais and Bahia indicate that it rained heavily in this region of Brazil during five of the six Heinrich events, which occurred at 10,000-year intervals, on average. It rained most heavily and for the longest around 48,000 years ago, during Heinrich event number 5 (HE-5), and 39,000 years ago, during HE-4; both periods lasted somewhere between 1,500 and 3,000 years. The increased rainfall in the Cerrado described by Stríkis and Cruz has previously been identified in part of the Caatinga (semi-arid scrublands) region by geologist Augusto Auler. In the early 2000s, during his postdoctoral fellowship at the Federal University of Minas Gerais (UFMG), Auler mapped the Toca da Boa Vista cave—the largest cave in Brazil at 120 kilometers long—collecting speleothems from there and two other caves in Campo Formoso, a municipality in the semi-arid region of northern Bahia.

By dating and analyzing the speleothems in partnership with foreign researchers, he was able to reconstruct the region’s rainfall pattern for the last 210,000 years. According to the data, the area was not always so dry. There were long dry periods, but every 20,000 years or so, the climate became wetter, the researchers reported in a 2004 article in the journal Nature. The periods of heaviest rainfall coincided with four Heinrich events from the last glaciation (HE-1, HE-4, HE-5, and HE-6). According to the researchers, HE-4 lasted about 3,000 years in the region, enough time to change the profile of the local flora and to enable the emergence of corridors of denser vegetation that may have connected the Atlantic Forest and the Amazon, which today are more than 1,500 kilometers apart.

The researchers also found evidence that taller and greener vegetation, more typical of a humid climate, existed in what is now the Caatinga. While studying her PhD at IGC-USP, paleobotanist Patrícia Cristalli found limestone rocks in the valleys of the Salitre and Jacaré rivers in Bahia that range in age from 11,000 to more than 600,000 years old and contain fossilized leaves of plants typically found in the Atlantic Forest and the Amazon rainforest. Known as tufa, these rocks form on the bottom of dried up rivers that were once rich in calcium carbonate. “The tufas are an indication that there was moving water in the region,” says Cruz, who participated in the expedition to collect the samples.

A few years earlier, in Pilão Arcado, an area of ​​dunes within the Caatinga in northwestern Bahia, palynologist Paulo Eduardo de Oliveira found 11,000-year-old sediments containing fossilized pollen from large Amazonian trees, such as those of the Simarouba genus, which can grow as tall as 35 meters. “In some areas of the Caatinga, which is today dominated by cactus, there were once forests typical of humid climates, with species commonly found in the Amazon,” says Oliveira, now a professor at IGC-USP. “The tufas provided macroscopic evidence of what I had already observed on a microscopic level,” explains the researcher. While studying sediments from the last glaciation, Oliveira also found pollen grains from trees typically found in the Araucaria moist forest in what is now the Cerrado region of Minas Gerais.

These and other fossilized pollen records, in addition to rainfall data obtained from caves in Brazil, Peru, and Bolivia during studies on the origin of biodiversity in the Atlantic Forest and the Amazon, reinforce the hypothesis that the Amazon and the Atlantic Forest may have been joined together at more than one point in time during the not-so-distant past. “These wetter periods, usually a few thousand years long, may have led to the intermittent formation of vegetation corridors between these great forests,” says Stríkis.