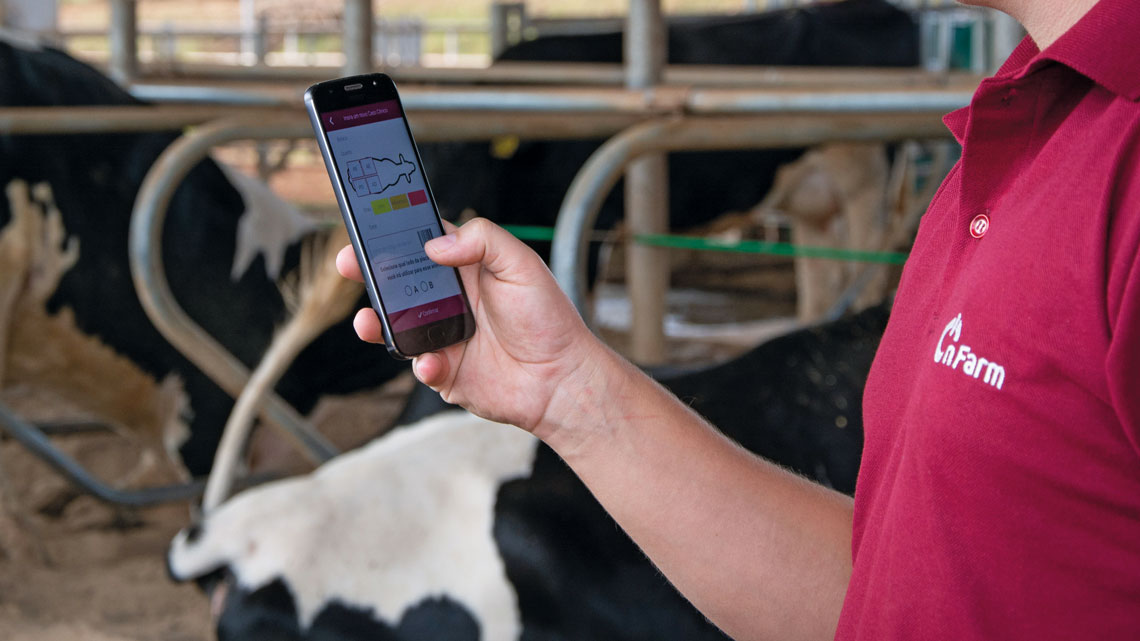 OnFarm can diagnose mastitis in dairy cattle within 24 hours

Mastitis, a mammary gland infection, affects well-being in dairy cattle and causes losses of R$6 billion in Brazil’s dairy farming industry. In addition to the cost of treatment and reduced milk production, farmers need to discard any milk containing residual antibiotics used in treatment. But identifying the precise cause of the infection can be difficult, so most farmers use broad-spectrum antibiotics for treatment. Specialists estimate that in 30% of cases these drugs are unnecessary and cows will heal on their own.

As a solution to the problem, OnFarm, a startup based in Pirassununga, São Paulo, created a system—consisting of a mini-lab dubbed SmartLab, a growth medium, and a data management and decision-support application—that allows farmers to identify the root cause of the mastitis within 24 hours. Tests are done on site using a microbiological culture of a sample of milk from the infected animal. A quick diagnosis allows farmers to select the best approach to managing the disease. More than 300 cattle farmers have purchased the OnFarm kit since it was first placed on the market in 2018.

OnFarm is one of the 1,125 agribusiness startups identified in a survey, titled “Radar AgTech Brasil 2019,” conducted by the Brazilian Agricultural Research Corporation (EMBRAPA) in collaboration with investment fund SP Ventures and consulting firm Homo Ludens. These innovative, technology-based firms—known as agtechs—form one of the pillars of Brazil’s agribusiness innovation ecosystem, alongside universities, research centers, large agricultural corporations, farm input and equipment manufacturers, and investors.

“Brazil is a hotbed for the development, validation, and deployment of new technologies created by agricultural startups. This is largely due to the importance of agriculture in Brazil and the industry’s vibrant innovation environment,” says Daniel Trento do Nascimento, secretary for innovation and new business at EMBRAPA. “Brazilian agtechs have access to a robust knowledge base that has been built over the years by institutions such as EMBRAPA, ESALQ [the Luiz de Queiroz School of Agriculture at the University of São Paulo], FEAGRI [School of Agricultural Engineering at the University of Campinas], UNESP [São Paulo State University] in Jaboticabal, IAC [the Crop Science Institute, in Campinas], and UNICA [the Sugarcane Industry Union].”

The study found that most agtechs (47%) are focused on creating technologies used downstream of livestock farms, such as in food storage, logistics and transportation, packaging systems, and food safety. Around one-third (35%) are developing solutions for on-farm operations and 18% for upstream activities, including genomics, biotechnology, and animal nutrition.

In 2018 these 1,125 agtechs received total investments of US$80 million, four times the figure in the previous year. The EMBRAPA report shows that the agtech ecosystem has grown consistently over the past five years, on the back of an active venture capital environment and strong demand for new technologies from leading agribusiness players.

Luis Claudio Rodrigues de França, director of the Department of Agricultural Innovation Support at the Ministry of Agriculture and Food Supply (MAPA), notes that while 79% of agtechs are located in the Southeast and South of Brazil—and especially in São Paulo, Piracicaba, and Campinas—the movement is occurring countrywide. “There are a large number of active startups in the Midwest and in MATOPIBA [an acronym formed by the initials of Maranhão, Tocantins, Piauí, and Bahia, designating a region that is considered one of the last agricultural frontiers in Brazil],” says França. “Agtechs are playing an important role in accelerating innovation in farming.”

One distinguishing advantage of these firms is their ability to rapidly develop, test, and bring innovative solutions to market. This agility is enabled by a leaner and less rigid structure than in traditional agribusiness companies. “Whereas in the past the innovation model was built around large corporations and research centers, today it largely revolves around startups, many of them incubated at and supported by universities,” says José Tomé, a cofounder of AgTech Garage, an innovation hub based in Piracicaba.

Founded in 2018, AgTech Garage recently launched a Fellowship Program to integrate universities with the hub’s innovation community of startups, farmers, and agribusiness corporations. “Agtechs are not always able to solve farming problems on their own. They often need more in-depth knowledge or a technology partner. Our Fellowship Program is designed to mediate this process,” says Tomé.

Pulse, an innovation hub in Piracicaba run by Raízen—Brazil’s largest producer of sugar, ethanol, and bioenergy—has a total of 28 resident startups, of which 21 have ongoing pilot projects on Raízen-owned farm properties. Pulse has partnered with names such as Brazilian telecommunications carrier Vivo, Swedish telecommunications company Ericsson, and EsalqTec, a startup incubator at ESALQ. Pulse and its partners are jointly developing a rural connectivity project called Agro IoT Lab.

Founded in 1994 at Fazenda Areão, an experimental farm adjacent to the ESALQ campus, EsalqTec currently hosts 70 companies including resident startups, associates, and pre-incubation enterprises. Spanning an area of 130 hectares, the farm has the connection infrastructure needed to seamlessly collect data and develop and improve new digital technologies.

Agribusiness innovation is also being supported by funding through graduate and doctoral research grants. Since the mid-1990s, FAPESP has awarded nearly 280 grants for digital farming research at universities and research centers throughout the state of São Paulo (see graph opposite).

“FAPESP has played a central role from the beginning through its investment in research projects related to precision agriculture. This funding led to the first studies and developments in the field in Brazil, and helped the country to break away from its reliance on imported technologies,” says agricultural engineer Paulo Sérgio Graziano Magalhães, a member of the Multidisciplinary Center for Energy Planning at the University of Campinas (NIPE-UNICAMP).

One of the first FAPESP-funded projects in this field, in 1996, developed a system for monitoring sugarcane-harvesting operations using sensors and GPS (Global Positioning System) technology to map out crop yields. The research grant was awarded to doctoral student Fábio Marcelo Serpa, under the supervision of Magalhães at FEAGRI-UNICAMP.

Around the same period, the Foundation funded another two pioneering projects in agriculture. The first, at ESALQ, was similar to the project led by Fábio Serpa at UNICAMP. The ESALQ project developed an automated system for monitoring mechanized harvesting of grain crops in the state of São Paulo using a differential global positioning system (DGPS). The second project attempted to develop a device for formulating and dozing solid fertilizers at variable rates with the aid of a GPS system.

In the last two decades, technology-based firms in São Paulo have received 50 grants from the Research for Innovation in Small Businesses program, RISB (PIPE in the Portuguese acronym), to develop new solutions for digital agriculture. With funding from the RISB/PAPPE Grant offered by FAPESP in partnership with the Brazilian Funding Authority for Studies and Projects (FINEP), Campinas-based firm Agrosmart developed a system for digitizing pest traps—yellow cards with an adhesive coating used to capture psyllids. These insects are responsible for spreading citrus greening, the most prevalent disease affecting citrus groves. Farmers use these cards to flag grove areas that have become infected and require pesticides.

Agrosmart has also launched a cloud-based platform that allows farmers to monitor field operations in real-time. Sensors spread across the field are used to sense environmental conditions including air humidity and soil moisture, temperature, probability of precipitation, and wind direction and speed.

New Business Director Guilherme Raucci explains that the data are transmitted by satellite and are used to generate reports and recommendations on risks and opportunities for a diverse range of crops. The information is stored on a cloud-based platform called Agro-smart Cultivo Inteligente, which farmers can access remotely. The system also sends WhatsApp alerts to farmers’ mobile devices.

A recent study led by researchers at USP underlined the importance of investing in human capital for the agriculture industry in São Paulo. The study, titled “FAPESP support for the development of agriculture in the State of São Paulo, Brazil,” found that every R$1 invested in research and development (R&D), higher education, and rural extension generated a return of R$12 to the local economy as a result of increased farm productivity. The study was part of a research project conducted between 2013 and 2018.

Since 1996, FAPESP has awarded more than 270 grants for digital farming research.