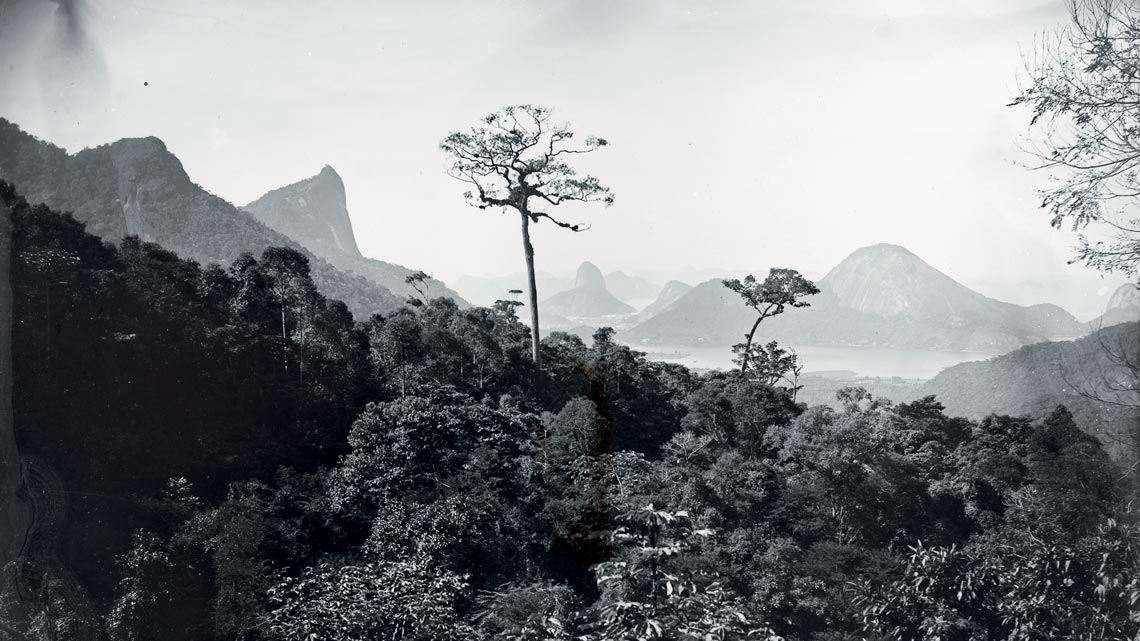 If he were alive today, famed naturalist and politician José Bonifácio de Andrada e Silva (1763–1838) would probably be deeply shocked by the huge, persistent fires in the Amazon and the Pantanal. Two centuries before today’s images of burning vegetation and charred animal remains began circling the globe, the “Patriarch of Independence” was already expressing indignation against the environmental degradation instituted in colonial Brazil based on predatory extractivism. “Destroying virgin forests, as has been practiced in Brazil up to now, is an insufferable extravagance, a horrendous crime, and a massive insult to nature,” he wrote in 1821, a year before he participated in the Independence movement alongside Dom Pedro I.

Although he cannot be considered an environmentalist in the modern sense, José Bonifácio contributed to the introduction of ecological issues in Brazil and an environmental concern that remains to this day. “He was part of a group of intellectuals who, at the turn of the nineteenth century, began to criticize the careless exploitation of natural resources,” explains historian José Augusto Pádua, from the Federal University of Rio de Janeiro (UFRJ), a researcher specializing in the issue. José Bonifácio studied law and natural philosophy at the University of Coimbra in Portugal.

“He had direct contact with Enlightenment knowledge-building regarding what they called the ‘natural system.’ After returning to Brazil, Bonifácio advanced the idea that economic progress must not come at the expense of destroying the forests,” says Pádua. “At the time, he began to theorize that the loss of forests would end up harming rural production, because it would decrease rainfall, degrade soil and, in the end, cause desertification,” the researcher points out. Thus, the issues that occupied José Bonifácio concerned the more efficient and rational use of nature to ensure an improved economy—an idea now associated with the concept of sustainable development.

Environmental conservation movements began to emerge in the second half of the twentieth century. Even so, Bonifácio played a decisive role in the earliest days of environmental awareness in Brazil, argues Padua. “His writings guided debates between politicians, legal scholars, and the men of science of his time.” Other intellectuals continued the work of environmental criticism. Abolitionists like Joaquim Nabuco (1849–1910) and André Rebouças (1838–1898) argued that, as long as slavery existed it would not be possible to establish a healthy relationship between people and land use in Brazil. 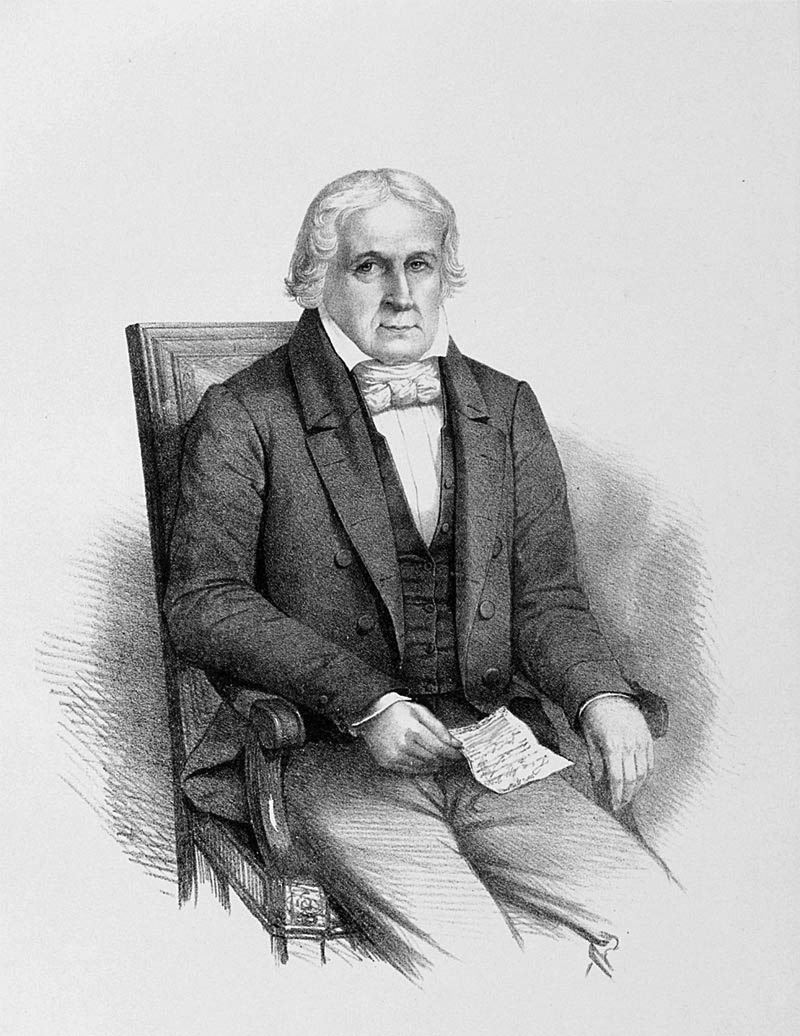 A few small attempts to influence governments worked out, such as the restoration of the Tijuca Forest, in Rio de Janeiro, from 1861 to 1874. “A group of intellectuals convinced the government that deforestation was causing droughts in the city,” says Padua. Much of the region had been cleared for the production of coffee and charcoal. The reforestation project required planting 100,000 seedlings from native tree species.

It wasn’t until the beginning of the twentieth century that the belief that preserving nature could only be guaranteed by the government took root, as historian Ingrid Fonseca Casazza details in an article published in July in the journal História, Ciência, Saúde – Manguinhos. The most significant changes occurred in the 1930s, at the beginning of the first Getúlio Vargas (1882–1954) administration, when scientists involved with environmental issues were assigned positions in government. “They acted by implementing legal instruments for the rational management of natural resources,” writes Casazza.

She highlights the work of botanist Paulo Campos Porto (1889–1968) as director of the Institute of Plant Biology of the Ministry of Agriculture, which was closed in 1938. In Casazza’s evaluation, Porto played an integral role in establishing natural resources management policy during that period. As Secretary of Agriculture for the state of Bahia, in the 1940s, the botanist created the Monte Pascoal National Park in the Porto Seguro region, with the mission of preserving local fauna and flora.

The environmental agenda ceased being the sole province of specialists and began to become a mainstream issue in society during the 1960s. “It was the moment when the intellectual debate on conservation began to move closer to the counterculture movement,” observes the historian and environmentalist Samyra Crespo, a senior researcher at the Ministry of Science, Technology, and Innovation (MCTI). “The discussion was no longer focused solely on promoting the rational use of natural resources, which allowed space for reflections on how to save humanity and the planet,” she explains. 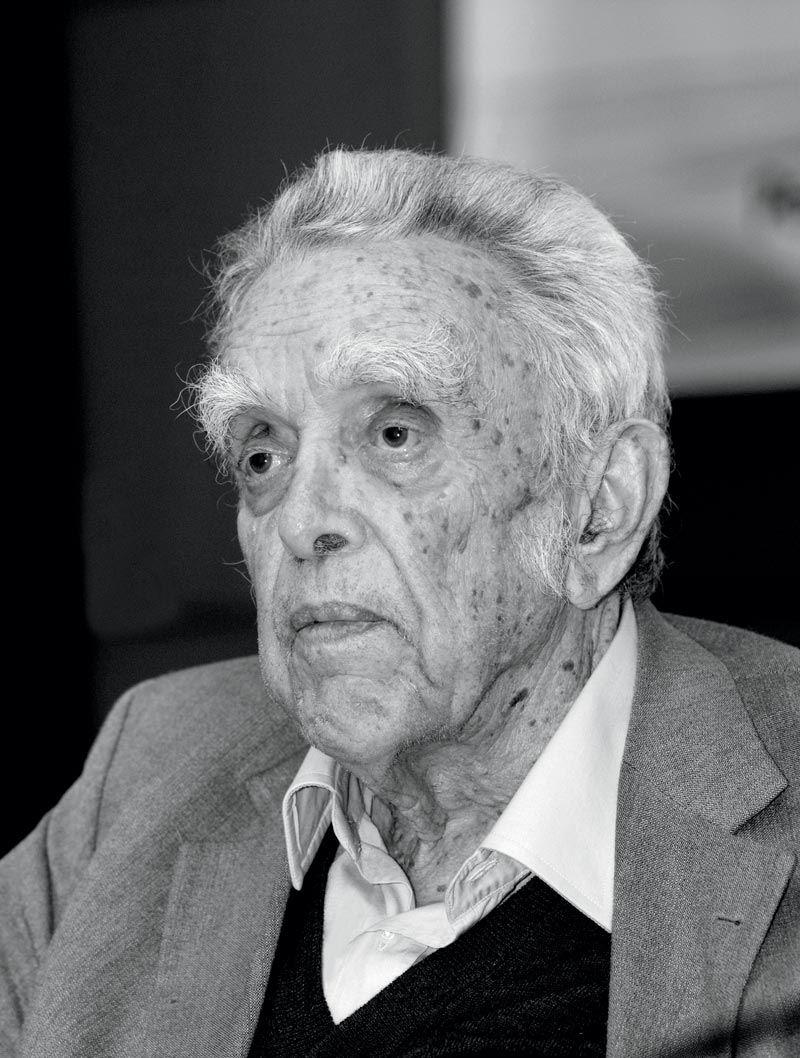 An important turning point in the environmentalism of the period was the publication of the book Silent Spring in 1962 by American biologist Rachel Carson (1907–1964). “It’s a classic of environmental literature. Carson investigated and exposed the use of pesticides and their effect on people and the environment,” Crespo comments. Newspapers republished excerpts from the book; there were repercussions in Congress, and U.S. president John F. Kennedy (1917–1963) instituted a commission to study the issue (see Pesquisa FAPESP issue no. 202).

In Brazil, the work’s impact was primarily felt in academia. Paulo Nogueira-Neto (1922–2019), professor emeritus at the University of São Paulo (USP), belonged to the group of environmentalists that were influenced by Carson, recalls sociologist Pedro Roberto Jacobi, from USP’s Institute of Energy and Environment. “Nogueira-Neto was special secretary for the environment between 1973 and 1985 and stands out as one of the primary drafters of Brazilian environmental legislation.” Since then, Jacobi adds, regulations on the production and disposal of chemical products has become stricter, aimed at avoiding contamination and preventing disasters.

As in other countries, environmentalism in Brazil entered a new chapter with the Stockholm Conference, organized by the United Nations in 1972. It was the first major meeting of heads of state to discuss environmental issues. Meanwhile, most in the political arena were not taking ecological activism very seriously.

The expansionist logic of the military dictatorship (1964–1985) prevailed in Brazil, which included the construction of hydroelectric dams and roads in indigenous territories. “Their utopia was to make the country highly industrialized,” states Jacobi. Environmentalists’ entry into this field of political dispute manifested in eco-development, which sought to reconcile economic development with conservation. The concept was developed by economist Ignacy Sachs, of the School for Advanced Studies in the Social Sciences, in Paris. 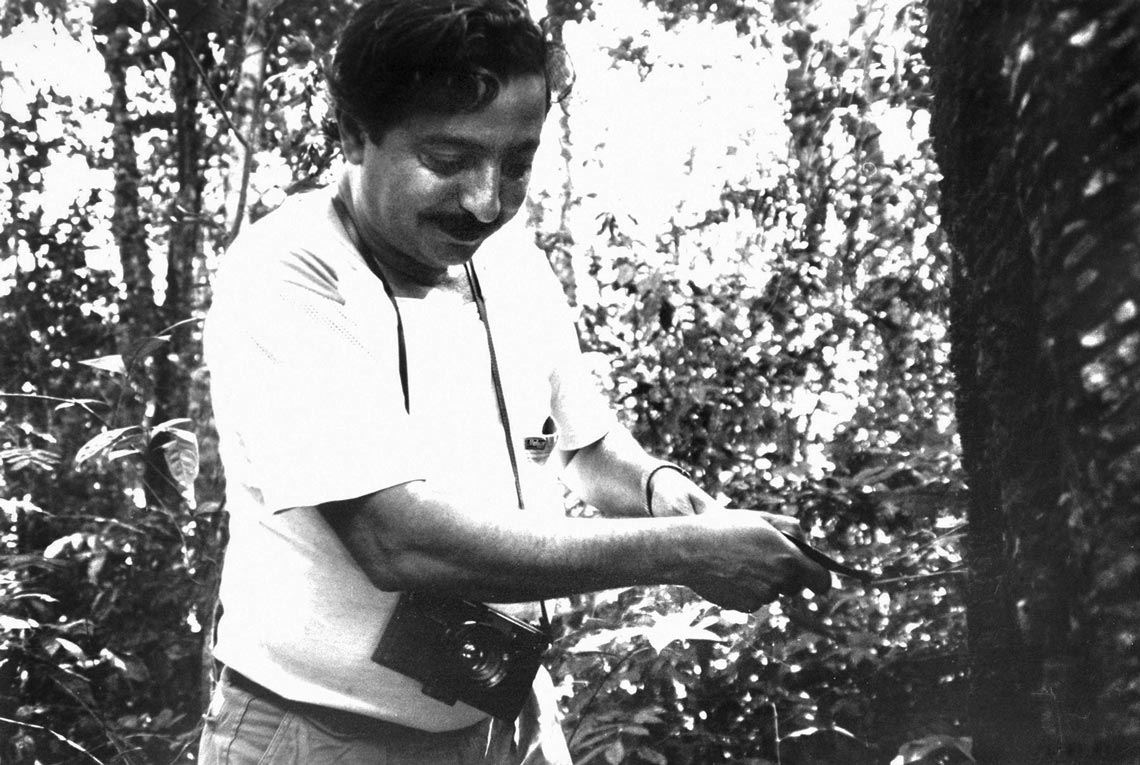 Sachs came to Brazil from Poland at the age of 14. He graduated in economics at Cândido Mendes University, in Rio de Janeiro, and maintained a close relationship with Brazil, where he taught at universities during the 1980s. “Environmentalism began to consider the potential for models of development that take into account the economic vocation of Brazilian biomes, such as the Amazon and the cerrado [wooded savanna], and the cultural differences between peoples,” Crespo says.

At the same time, far from urban centers and universities, a more popular sort of environmentalism was gaining strength and mobilizing fishermen and rubber tappers. “They were workers who were fighting to preserve the environment to defend better living conditions,” explains Pádua. One of the foremost representatives of this movement was the union leader Chico Mendes (1944–1988) from Acre State, who united the rubber tappers whose very survival depended on preserving the Amazon rainforest. Mendes was murdered as a result of his activism.

In 1975, the term “global warming” was first published in the journal Science in an article by American oceanographer Wallace Broecker (1931–2019). A few years later, in 1979, NASA introduced the concept of “climate change” in a study on the effects of carbon dioxide (CO2) on the planet’s climate. The environmental debate gained a global dimension and new actors: nongovernmental organizations such as Greenpeace and the WILD Foundation were also created during that era. 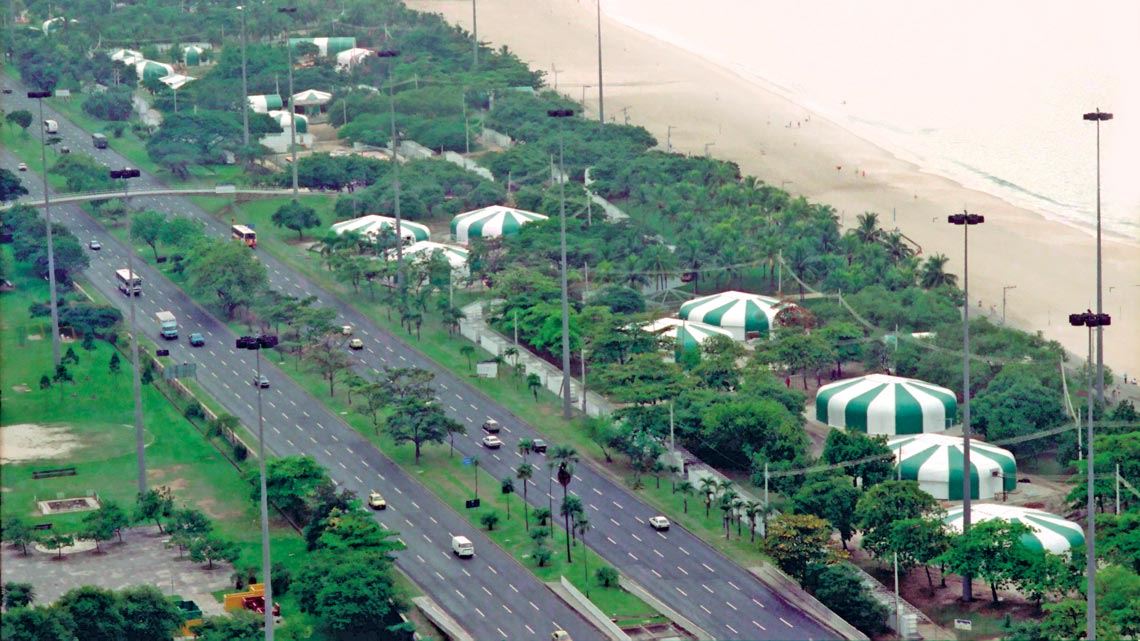 Pavilions used for presentations and debates at the 1992 Earth Summit, a milestone in the consolidation of international interest in socioenvironmental problemsEurico Dantas / Agência O Globo

In Brazil, environmentalists first began to organize in local groups in order to expand the dialogue with the business and political sectors. One example is the Gaucho Association for the Protection of the Natural Environment, one of the first ecological communities in Brazil, created in 1971. One of its founders was agronomist José Lutzenberger (1926–2002), who contributed to legislation to control the use of agrochemicals in the state of Rio Grande do Sul, reflected in the Brazilian Agrochemicals Act of 1989. Additional concerns during the 1970s regarding the safety issues and environmental impacts of nuclear energy also mobilized environmentalists and scientists. Brazilian NGOs, such as SOS Mata Atlântica, began to emerge in the 1980s.

International interest in socioenvironmental problems linked to climate change only consolidated in the early 1990s. One major milestone in this process was the United Nations Conference on Environment and Development, known as the 1992 Earth Summit, which resulted in the creation of the United Nations Framework Convention on Climate Change. The Intergovernmental Panel on Climate Change (IPCC) had been conceived by the UN four years earlier to systematize scientific studies on climate change. “This boosted the professionalization of environmentalism. NGOs started to conduct research, produce technical reports, and collaborate with universities and government agencies in monitoring operations,” reports Jacobi.

Increased cooperation between environmentalists and public authorities was also strengthened after Brazil’s re-democratization [beginning in the mid-80’s], says Crespo, of MCTI. The decentralization of political and administrative power generated a demand for technical staff to assume positions in state and municipal environmental agencies, which contributed to many environmentalists becoming government managers.

Today, Brazilian environmentalism faces “even larger than usual” challenges in Padua’s estimation, referring to an “unprecedented lack of regulatory control.” At the same time, he sees an opportunity to strengthen the movement. “Highlights in the response to the ongoing attacks on the environment are the defense by institutions like INPE [National Institute for Space Research], which monitors deforestation in the Amazon, and more active mobilization by environmental organizations to reinforce awareness throughout the country.”