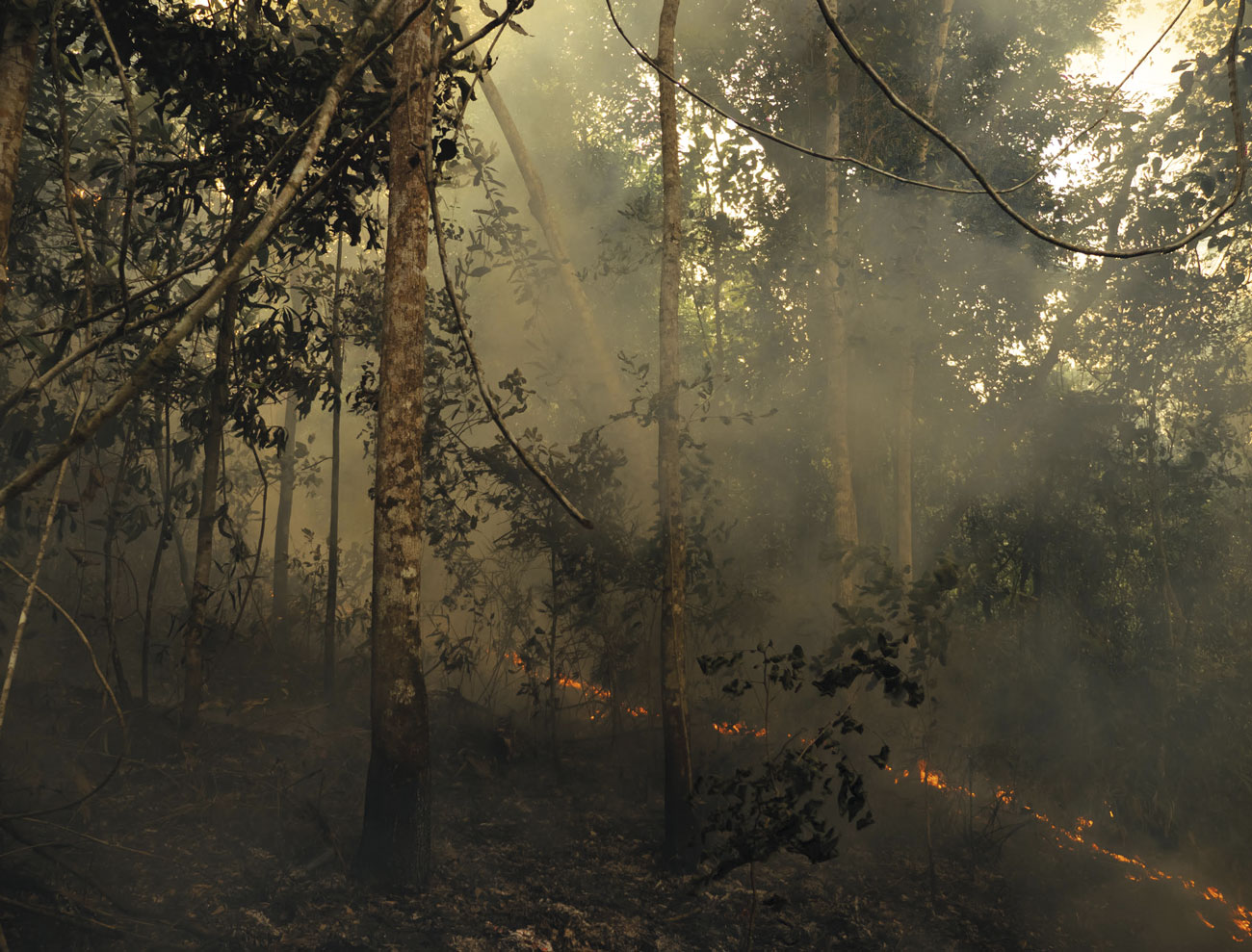 Forest fires in Santarém, Pará: changes in rainfall caused by El Niño contributed to the longer dry season in the region in 2015

A report released in November by the Dutch publisher Elsevier showed that over the past five years, more than 27,000 articles were published around the world on the topic of disaster science, an area that investigates the risk of natural and human-caused disasters. This number represents 0.22% of the total number of papers in all knowledge areas which were indexed in the Scopus database between 2012 and 2016. A sizeable portion of the articles (9,571) address topics related to geological disasters, such as earthquakes and landslides (see graph). Analysis of these scientific works indicates that the frequency of these events has increased over the past 50 years, partly because of population growth in coastal zones and risk areas, as well as intensification of events associated with extremes of climate variability such as floods and droughts.

Another result was the observation that production on natural disasters is very low in emerging countries which are strongly impacted by natural disasters. For example, the Central American country of Belize is one of the nations that has suffered the greatest economic losses from hurricanes, but only one article was published on this subject by authors there in recent years. Other cases are Haiti in the Caribbean, with only 42 papers published, and the African nation of Madagascar, which did not produce any scientific studies in this field. “It is necessary to stimulate research on natural disasters, a new area throughout the world which requires integration of various disciplines ranging from the natural to the social sciences,” says Osvaldo de Moraes, director of the Center for Natural Disasters Monitoring (CEMADEN), an agency connected to the Brazilian federal government which participated in the Elsevier study.

Adam RonamThe survey indicates that China is the most productive country in this field, with 6,301 articles published and an emphasis on prevention. Next is the United States, with 6,287 projects, most dealing with immediate responses to accidents and recovery of destroyed areas. Also notable are the United Kingdom (1,351) and Japan (4,017). This latter nation is distinguished by the impact of its production, measured by the number of citations; Japan is the most specialized country in disaster science, dedicating 0.66% of its scientific production to this area. This rate is three times higher than the global average of 0.22%.

Asia is prone to natural disasters, which leads Chinese and Japanese scientists to develop competence in this area. According to the report, 9 of the 10 most prolific institutions in disaster science are located in these two countries: the first is the Chinese Academy of Sciences, and second is the University of Tokyo. Columbia University in the United States is the first non-Asian institution on the list.

The report showed that research activities in each country naturally tend to reflect the types of disasters that occur in each region. For example, Japan specializes in earthquakes and tsunamis, while scientists study meteorological disasters and biological agents in the United States and environmental catastrophes in India. Brazil stands out for research on hydrological disasters such as droughts, floods, and landslides. Although few articles are published on disaster science, Brazil does not lag behind in terms of the impact of its publications when compared to countries that already have an established tradition in this area. “The number of citations for the papers in the area of hydrological events is higher than the national average,” says Osvaldo de Moraes.

Spotlight on Brazil
He explains that the country has a tradition of this type of research. “Every time you conduct an environmental impact study to build a hydroelectric power plant, climate impacts must be assessed in the region along with which areas are susceptible to flooding. This dynamic has required research on hydrological disasters alongside the use of resources to generate electricity,” observes Moraes. This was not the case for the area of geological disasters, for example; Brazilian geology is more focused on oil and mineral exploration than studies on mass movements and soil science.

Extreme events that have occurred in Brazil in recent years, such as a tornado that hit the state of Santa Catarina in 2009 and landslides that devastated seven cities in the mountainous region of Rio de Janeiro in 2011, have mobilized scientists and decision-makers. The Atlas brasileiro de desastres naturais [Brazilian atlas of natural disasters], which was created by the Federal University of Santa Catarina in 2013, showed that three times more disasters occurred in the country between 2000 and 2009 than in the previous decade. More recent projections indicate increased risk of natural disasters such as floods, landslides, and extreme droughts in the coming decades (see Pesquisa FAPESP, issue no. 249). “Here there are no hurricanes or strong earthquakes, but we have a history of a very large number of hydro-meteorological disasters,” says José Marengo, General Coordinator of Research and Development at CEMADEN. The institution was created in 2011 to develop a plan for preventing and addressing disasters in conjunction with the federal government.

In broad terms, CEMADEN uses information on meteorology, geology, and hydrology provided by the National Institute of Meteorology, the National Water Agency, and the Brazilian Geological Survey (among other resources) to develop models and detect areas of physical vulnerability in the country. This information is compared with data on social vulnerability, for example the number of children and elderly people in the region, collected by the Brazilian Institute of Geography and Statistics (IBGE). CEMADEN has a team of 30 researchers and 60 technicians who are responsible for creating the models and issuing daily alerts. “For example, the whole policy of trucking in water and providing drought payments that the federal government implements in the Northeast is based on information that CEMADEN passes to the president’s chief of staff,” says Moraes.

The role of researchers in the process of providing scientific advice to governments was another aspect evaluated by the Elsevier survey. It found that a substantial proportion of the 27,000 articles published in disaster science over the past five years focused explicitly on public policies: 7.5% of the articles had the word “policy” in their title, abstract, or keywords. “Research in disaster science is increasingly able to influence politicians,” said Fumihiko Imamura, an engineer and director of the International Research Institute of Disaster Science (IRIDeS) of Tohoku University in Japan. “In our case, for example, scientists who work in this area are part of the Central Council for Disaster Mitigation, an agency of the Japanese government responsible for drafting policies to reduce disaster risk. It is a way of ensuring that researchers’ opinions will be heard before measures are implemented.”

Imamura explains that IRIDeS operates in 38 fields of knowledge. “We investigate the physical aspects behind natural disasters on a global scale, such as mega-earthquakes, tsunamis, and extreme weather conditions,” he explains. The institution also works to construct disaster response and mitigation technologies based on lessons learned during events such as the Isewan Typhoon in 1959, the Great Hanshin-Awaji Earthquake of 1995, and the 2011 Tohoku Earthquake and subsequent tsunami.

Collaborations
Imamura believes that the main benefit of the Elsevier report is that it calls attention to the need to solidify more international partnerships in disaster science. This is because the nations with higher rates of deaths due to natural disasters, like Haiti, tend to have a low volume of academic production in this area. “These are poor countries that do not have budgets sufficient to support scientific capacity. This is one of the reasons why international research collaborations should be highly encouraged and motivated,” suggests Imamura. The Japanese engineer stressed the contribution Brazil can make. “Nearly 50% of the disasters between 1995 and 2015 were hydrological. Brazil has a strong research capacity in this area, and could therefore play an important role in international cooperation.”

Osvaldo de Moraes recalls that CEMADEN was designated to coordinate a working group in the area of disaster prevention and mitigation which was created in 2015 by the BRICS countries (Brazil, Russia, India, China, and South Africa). CEMADEN also has a partnership with the Meteorological Office in the United Kingdom to develop models which assess the impact of drought in the Brazilian semiarid region. Another collaboration involves the European Union’s Joint Research Center (JRC), to improve hydrologic modeling systems.

There are challenges that researchers from Brazil as well as other countries need to face in order to consolidate disaster science, observes Gilberto Câmara of the National Institute for Spatial Research (INPE), a member of the FAPESP Research Program on Global Climate Change. “Conducting studies on natural disasters presupposes a willingness to work in interdisciplinary environments, which does not always occur,” he says. “Assessing the possible risk of disasters is something complex. It is not enough to know whether it will rain a lot in a certain region; you must also know who will be affected by the flood. This requires researchers in the natural sciences to work together with anthropologists and sociologists,” explains Câmara, who was elected the new secretariat director of the Group on Earth Observations (GEO). The GEO has its headquarters in Switzerland, and is a global network of governmental organizations, research institutions, and companies with a mission to create solutions to manage information and data related to Earth observation.

Câmara notes that one of the institution’s goals is to promote open sharing of data and models that help fulfill the Sendai Framework for Disaster Risk Reduction, a document which encourages the creation of strategies to reduce damage caused by natural disasters by 2020. “The exchange of information between countries must be broadened, and data about earthquakes and floods must be available, for example. Only then will we be able to build better models,” says Câmera.