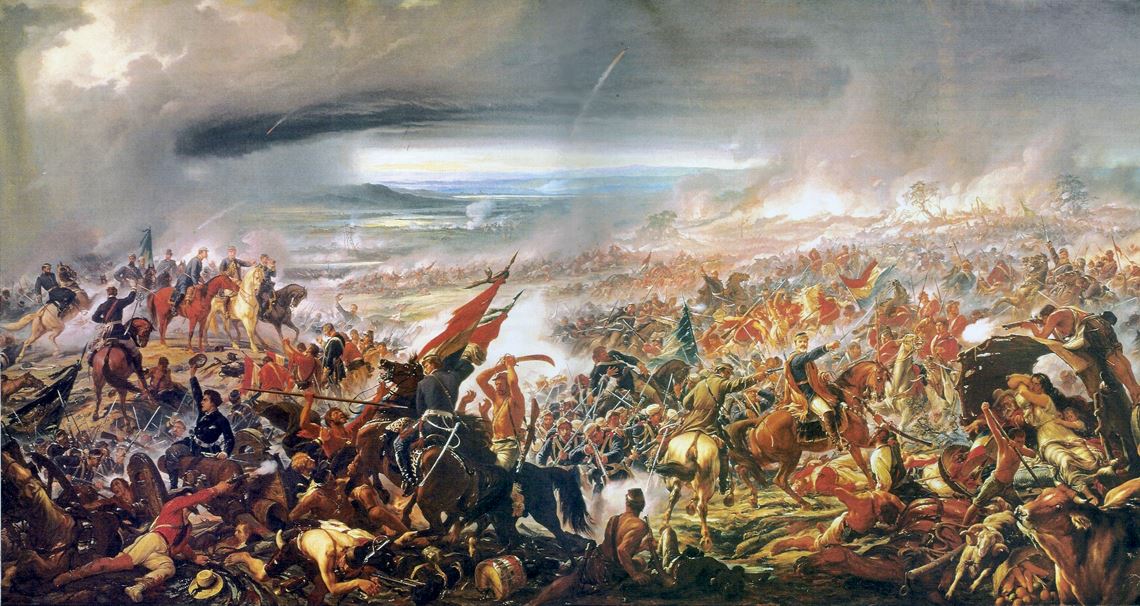 The Battle of Avay in December 1868, as portrayed in an oil painting by Pedro Américo between 1872 and 1877
Carlos Fioravanti
Issue # 309
nov. 2021
EpidemiologyHistoryPublic health

In 1982, historian Jorge Prata de Sousa was browsing the Army Archives in downtown Rio de Janeiro when he came across a collection of 27 logbooks, each with 100 to 370 pages, documenting the activities of the 10 field hospitals that tended to the sick and wounded during the Paraguayan War, the largest armed conflict in the history of South America, lasting from December 1864 to April 1870. Sousa was unable to examine them immediately as he was just about to leave for México to attend a master’s degree program, but the opportunity came in 2008 during his postdoctoral research at the Oswaldo Cruz Foundation’s National School of Health Policy (ENSP-FIOCRUZ), and since 2018 he has been conducting further research in correspondence with Janyne Barbosa, a professor of history at Fluminense Federal University (UFF).

A review by Barbosa of records showing patients’ names, age, rank, reason for hospitalization, treatment, dates of admission and discharge, and number of recoveries and deaths, shed new light on the burden of disease during the war: around 70% of Allied troops (Brazil, Argentina, and Uruguay) may have died from infectious diseases, mainly cholera, malaria, smallpox, pneumonia and dysentery.

Their research provides new insight into the causes of the high death toll during the war—in which Paraguay fought against a Triple Alliance of Brazil, Uruguay, and Argentina—including the poor sanitary conditions in which the soldiers lived and fought. Historians had previously assumed, but without hard evidence, that disease had killed more soldiers than battle wounds had. The war ended with around 60,000 casualties on the Brazilian side; Paraguay, which lost the war it had started by invading the then province of Mato Grosso, lost around 280,000 troops, more than half its population. 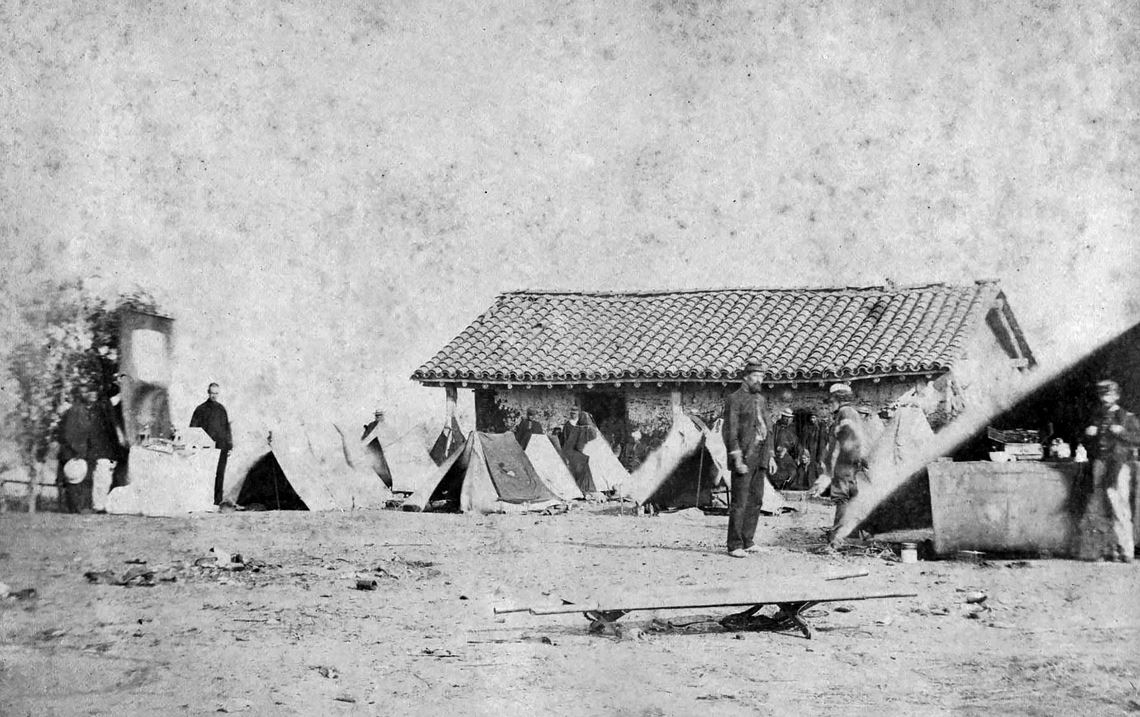 “Other wars during that period were also marked by a high death toll from infectious disease, including the Crimean War in Russia, from 1853 to 1856, and the American Civil War, from 1861 to 1865,” says Sousa, who authored the book Escravidão ou morte: Os escravos brasileiros na Guerra do Paraguai (Slavery or death: Brazilian slaves in the Paraguayan War; Editora Mauad, 1996). These wars were all fought in trenches—excavations that provided shelter for the troops but were conducive to the spread of infectious diseases due to poor hygiene, the abundance of rodents, and the wet conditions.

“The Paraguayan War was an epidemic war,” says Barbosa. “Infectious diseases were a fact of life throughout the war, which was punctuated by outbreaks of diseases like cholera.” Leonardo Bahiense, a historian doing postdoctoral research at the Federal University of Rio de Janeiro (UFRJ), concurs: “Cholera alone accounted for at least 4,535 Brazilian deaths throughout the war.” Based on documents at the Brazilian Historical and Geographic Institute, he found that in the first half of 1868, 52.5% of allied deaths resulted from intense dehydration caused by the bacterium Vibrio cholerae, and 3.6% from other diseases referred to generically as fevers. “Paraguayan soldiers and prisoners of war [PoWs] with cholera,” adds Barbosa, “were often ordered to be abandoned on the roadside when the troops moved from one camp to another.”

Reports from survivors of the war lend support to these findings. In A retirada da Laguna (Retreat from Laguna), a book first published in 1871 in French and three years later in Portuguese, army engineer Alfredo Taunay (1843–1899) describes the cholera outbreaks as “a hidden enemy” that “gave no quarter.” “The plague is the greatest enemy we have,” field marshal Manuel Luís Osório (1808–1879) reported to the Minister of War, Ângelo Muniz da Silva Ferraz (1812–1867), when he took command of the troops in July 1867. 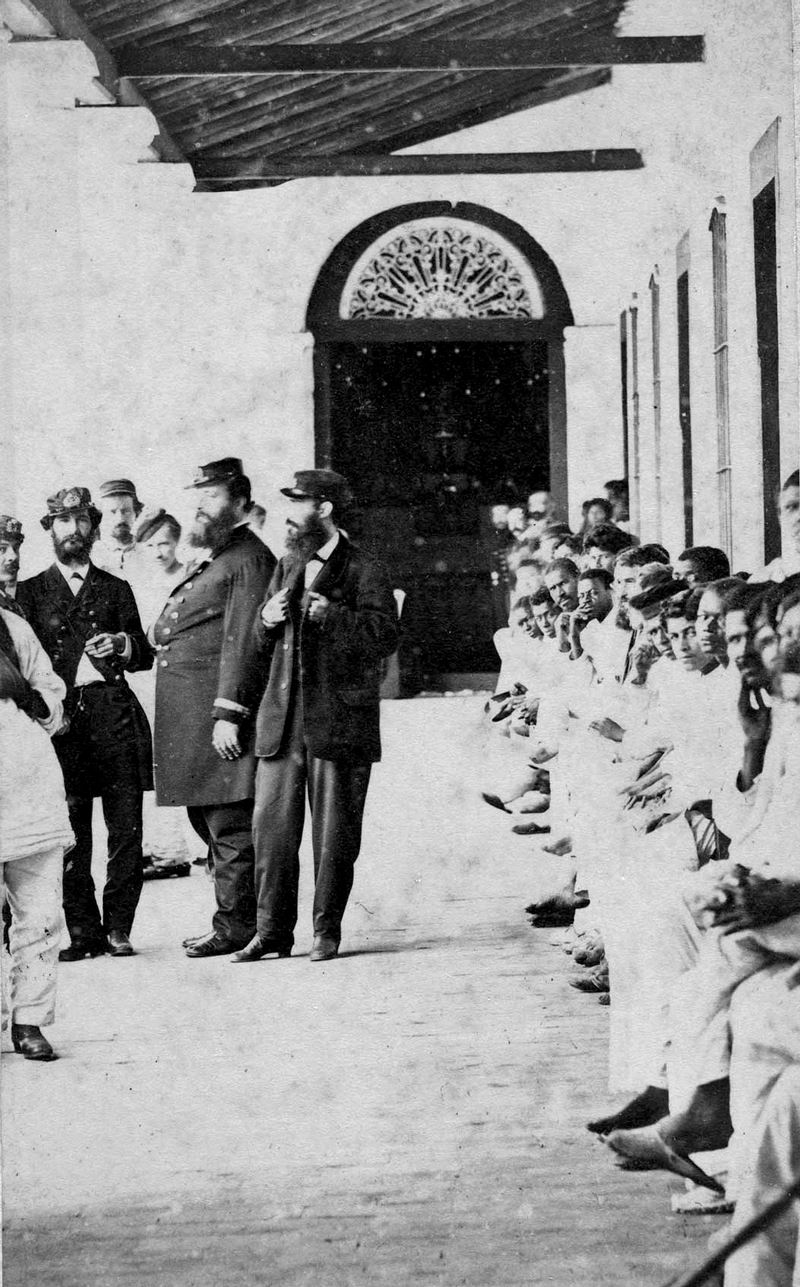 Troops and patients at a Navy hospital in Asunción, Paraguay, in 1869Carlos Cesar / National Library

In the logs retrieved from the Army Archives, Barbosa found records of a type of infectious disease that was rarely mentioned in reports at the time—sexually transmitted diseases: “Syphilis was everywhere. Officers blamed either their wives or their lovers. Women, and especially Paraguayan women, would prostitute themselves at the camps for food.” One peculiarity of the Paraguayan War is that soldiers’ mothers, daughters, sisters or companions would go with them to wash their uniforms and cook.

Even moving from one place to another had its risks. “A group of physicians and nurses departed in April 1865 from Rio de Janeiro and joined a battalion of 500 soldiers in São Paulo. But they had to stop two weeks later in Campinas, where a smallpox outbreak killed six troops,” says José Maria Orlando, an intensive care physician who authored the book Vencendo a morte – Como as guerras fizeram a medicina evoluir (Conquering death: How wars drove progress in medicine; Matrix, 2016). Nearly nine months later, the group risked contracting malaria from the swarms of insects living in the swamplands they had to cross to reach the battlefields.

“Many soldiers were not vaccinated for smallpox, and carried diseases with them from their hometowns,” notes Maria Teresa Garritano Dourado, a historian at the Historical and Geographical Institute of Mato Grosso do Sul, citing documents found in the Navy Archives in Rio de Janeiro. Dourado, who authored the book, A história esquecida da Guerra do Paraguai: Fome, doenças e penalidades (The forgotten story of the Paraguayan War: Hunger, disease, and punishment; UFMS, 2014), describes yet another enemy: the inclement weather. “Soldiers from the North had no winter clothes and often froze to death, unaccustomed as they were to the freezing southern climate,” she says. “They were fighting not only against the enemy, but for survival in the camps.”

General Dionísio Evangelista de Castro Cerqueira (1847–1910), who spent time at the front and wrote the book, Reminiscências da campanha do Paraguai, 1865–1870 (Memoirs from the Paraguayan campaign, 1865–1870; Army Library, 1929), reported that the drinking water at the camps was “yellow and thick with pollution from the surrounding corpses.” The dead were heaped in piles or dumped into rivers, contaminating the water. The way animals were slaughtered and cooked was also problematic: the guts and other unused parts would be left to rot in the sun, filling the camps with foul odors. “Flocks of vultures would scavenge and devour the remains,” wrote the officer. 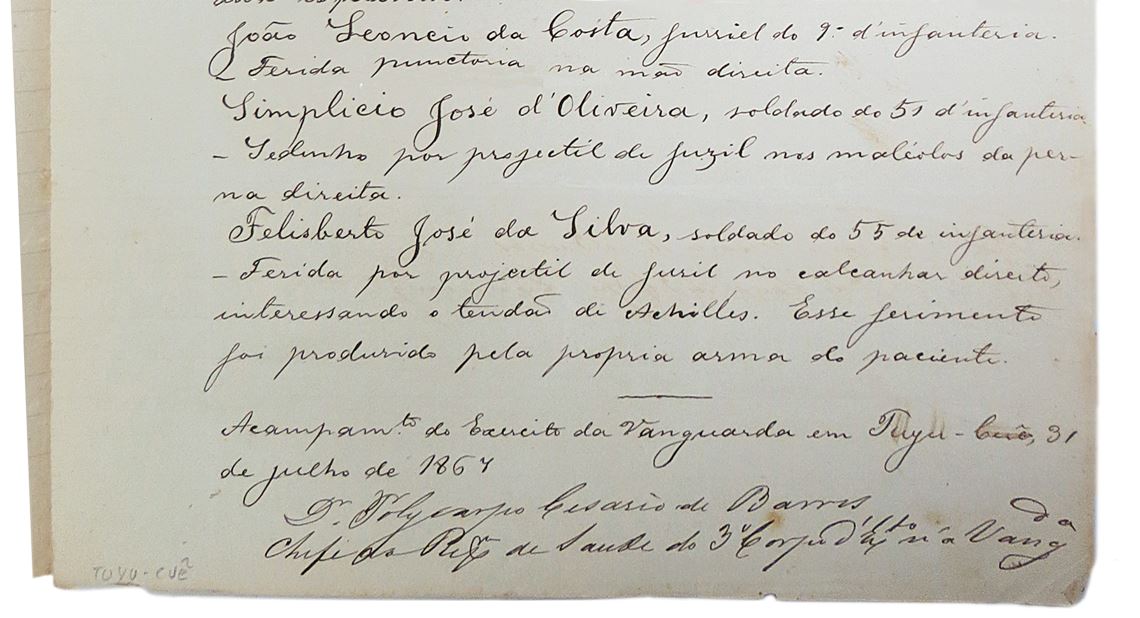 A logbook of soldiers admitted to field hospitals, found in the Army ArchivesArmy Archive / Reproduced from Janyne Barbosa / UFF

The wounded in battle
Civilian surgeons who were sent to the front, says Bahiense, initially learned their trade from reports written by medical teams in previous wars. During the Napoleonic Wars (1803–1815), Dominique Jean Larrey (1766–1842), chief surgeon of the French Army, required that surgical teams be stationed near the battlefront so they could provide prompt care, and that the wounded be evacuated quickly in horse-drawn ambulances. During the Crimean War, Florence Nightingale (1820–1910) introduced what Orlando refers to as the “ICU [intensive care unit] philosophy”: placing critical patients in beds nearest to the nursing station so that they could be watched more closely, and less critical patients further away.

“During the Paraguayan War, there was a broad and fruitful debate about surgical techniques,” says Bahiense. Surgeons discussed, for example, whether it was best to amputate [an arm or leg wounded by a bullet, machete or bayonet] immediately after injury or whether to wait for the soldier to get used to the idea of having been wounded. Even if surgeries were successful, the soldiers could die soon after from sepsis due to a lack of awareness of the need for, and proper methods of, sterilization. He found that orders for drugs (especially chloroform for anesthesia, and opium as a painkiller), bandages, and hospital clothes were made regularly as they were constantly running out. 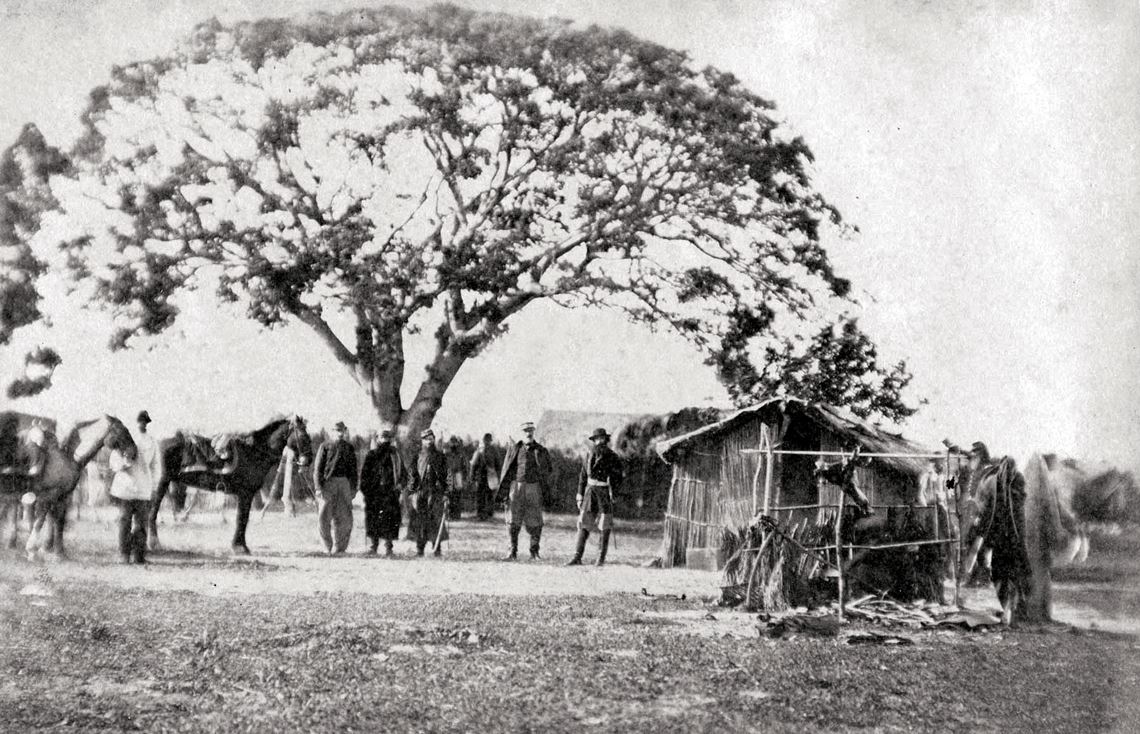 Argentine general Bartolomé Mitre with his officers in the region of Tuiuti, the scene of the bloodiest battle of the war, in 1866, where around 7,000 soldiers were killed and some 10,000 woundedExcursão ao Paraguay / National Library

“Wars, like epidemics, have turned the world into a testing ground, and although they took an immense human toll, they accelerated the discovery of new surgical techniques and new methods of treating burns and infectious diseases,” says Orlando. It was only during World War I (1914–1918) that the scales tipped and deaths from battle wounds outnumbered those from diseases—by a factor of two.

This shift can be explained first by improved hygiene and second by the introduction of new treatment methods—including the administration of saline solutions directly into soldiers’ veins to compensate for loss of blood. Beginning in World War II (1939–1945), the use of antibiotics such as penicillin helped to further curb the number of deaths from wound infections. During the Korean War (1950–1953), fewer amputations were necessary thanks to the development of new vascular surgery techniques. 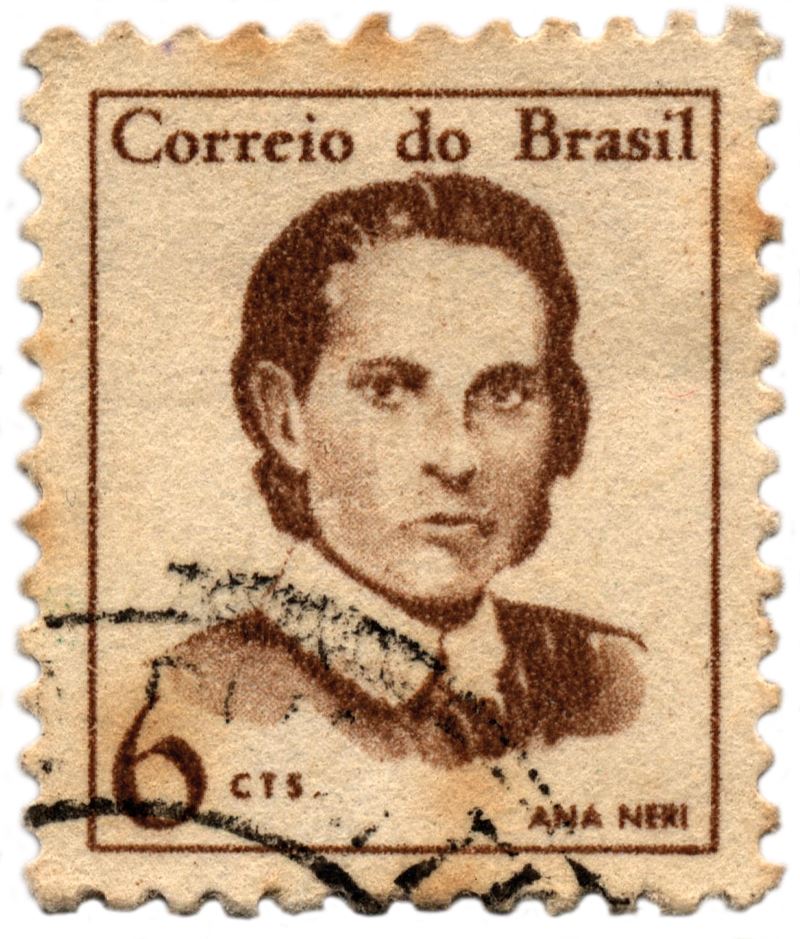 Anna Nery, a volunteer nurse later rewarded for her efforts by the EmperorReproduced

Bahiense points to yet another reason for the high mortality from infectious diseases during the Paraguayan War: “Brazil had not yet established a nursing profession like in the US and Europe.” Surgeon assistants were soldiers, corporals or Paraguayan PoWs who had attended crash courses on nursing. These were later replaced by nuns or by the women who accompanied the troops.

Among these was Anna Nery (1814–1880), who became an influential figure in the early days of nursing in Brazil. When two of her children were recruited to the front and ended up being separated, she enlisted as a volunteer to help tend to the wounded. With permission from the government of Bahia, Nery accompanied the troops, learned the basics of nursing from nuns in Rio Grande do Sul, and worked as a nurse in field hospitals on the battlefront. In recognition of her efforts, Emperor Dom Pedro II granted her a lifetime pension, which she used toward the education of her surviving children.