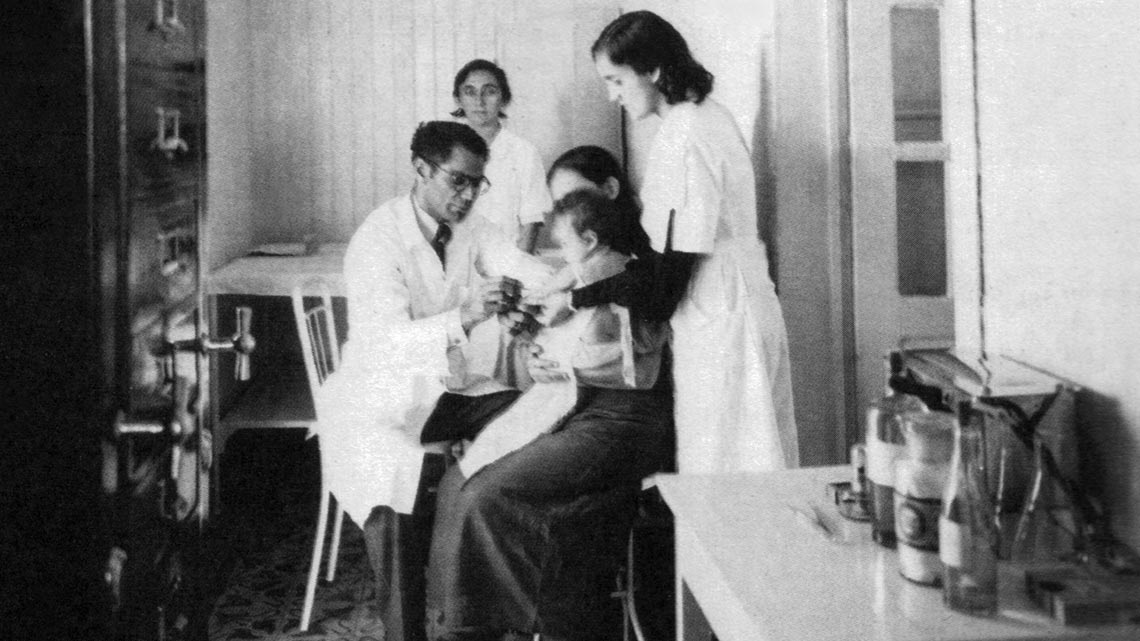 After shutting down for four years, in April 2020 the technical team of the Ataulpho de Paiva Foundation (FAP), in Rio de Janeiro, resumed production of the Bacillus Calmette-Guérin (BCG) vaccine. The interruption resulted from quality requirements imposed by the National Health Surveillance Agency (ANVISA), which in turn motivated vaccine imports. FAP is the only Brazilian manufacturer of the tuberculosis (TB) vaccine. The preventive measure first saw use in 1921 in France, and arrived six years later in Brazil, to protect newborns, children, and adolescents against the principal forms of tuberculosis, such as pulmonary TB.

The BCG vaccine is given to babies in Brazil while still in the maternity ward or by the end of their first month. BCG is prepared with a live, attenuated version of the bacterium Mycobacterium bovis, a species similar to M. tuberculosis, which is responsible for the disease in humans. “Like Covid-19 today, tuberculosis affected all social strata, although the poorest were and still are the most affected, because of their precarious living conditions, which promotes transmission of the disease,” says physician and disease historian Dilene Raimundo do Nascimento, from the Oswaldo Cruz Foundation (FIOCRUZ) of Rio de Janeiro. She authored the book Fundação Ataulpho de Paiva—Liga Brasileira contra a Tuberculose: Um século de luta (The Ataulpho de Paiva Foundation – Brazilian League against Tuberculosis: A century of struggle) (Quadratim/FAPERJ, 2001).

Despite the BCG vaccination’s effectiveness—up to 80% in children and adolescents—and the prospect of treatment with medication, tuberculosis is far from being eradicated. In 2019, it infected 14 million people and caused the deaths of 1.4 million, according to the World Health Organization (WHO). In Brazil, in 2020 the Ministry of Health recorded 66,819 cases and 4,500 deaths. 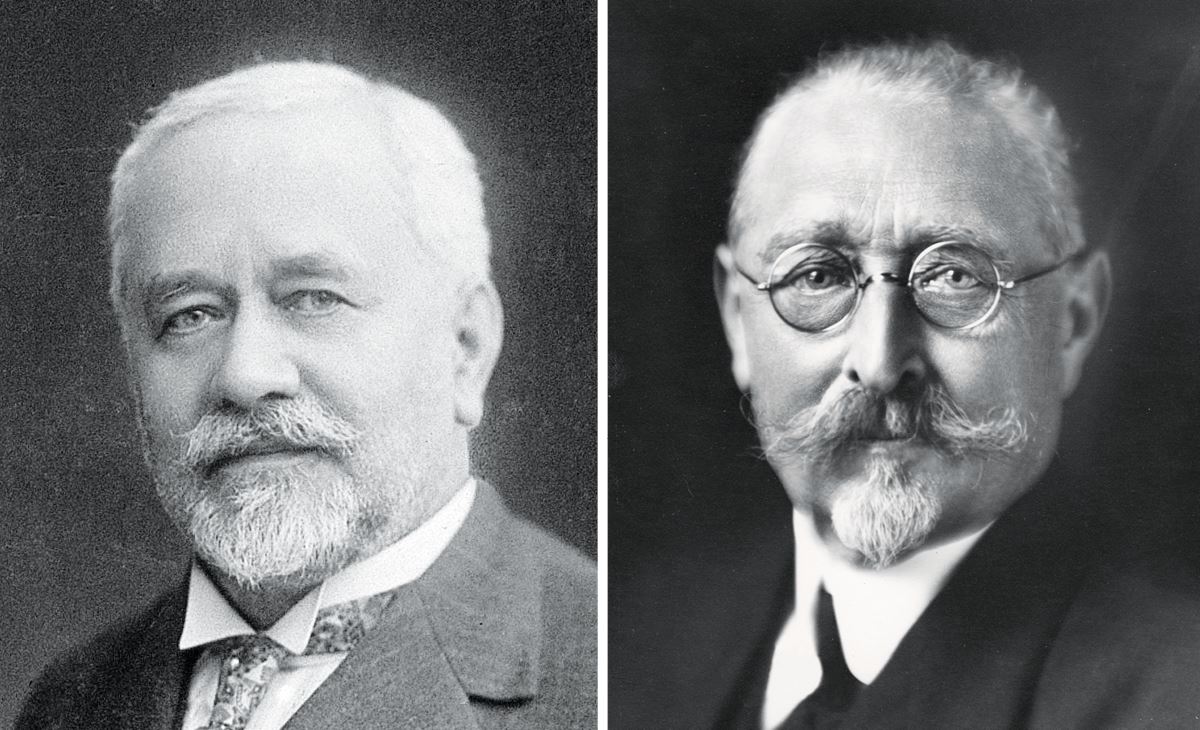 Albert Calmette and Jean-Marie Camille Guérin, the creators of the tuberculosis vaccine, the result of 13 years of workWikimedia Commons

Paris, Berlin, Lille, Rio
Tuberculosis was given its current name in 1839. In a book published that year, German pathologist Johann Schönlein (1793–1864) coined the term from tubercles, a term used since the seventeenth century to name the nodular lesions found in the lungs of autopsied cadavers. Until that time it had only been known as consumption, because it seemed to consume those sick with the disease, causing continuous weight loss.

Also known as white plague or chest disease, tuberculosis began to be understood scientifically in the mid-nineteenth century. In 1867, French military surgeon Jean-Antoine Villemin (1827–1892) communicated to medical colleagues at the French Academy of Medicine in Paris that, based on his experiments in rabbits, guinea pigs, dogs, and cats, tuberculosis was an infectious disease. He noted that the disease was common in densely populated cities and among military personnel who shared the same tent, indicating that proximity could facilitate its transmission.

Encouraged by Villemin’s discoveries, at the Berlin health department German bacteriologist Robert Koch (1843–1910) began work to find the cause of tuberculosis in August 1881. He infected guinea pigs with material extracted from patients, waited for the animals to become ill, and examined tissue samples prepared with different staining techniques to facilitate visualization under a microscope. On his 271st attempt, he found thin, spiral bacilli that, when cultivated and applied in animal models, proved to be responsible for the disease. 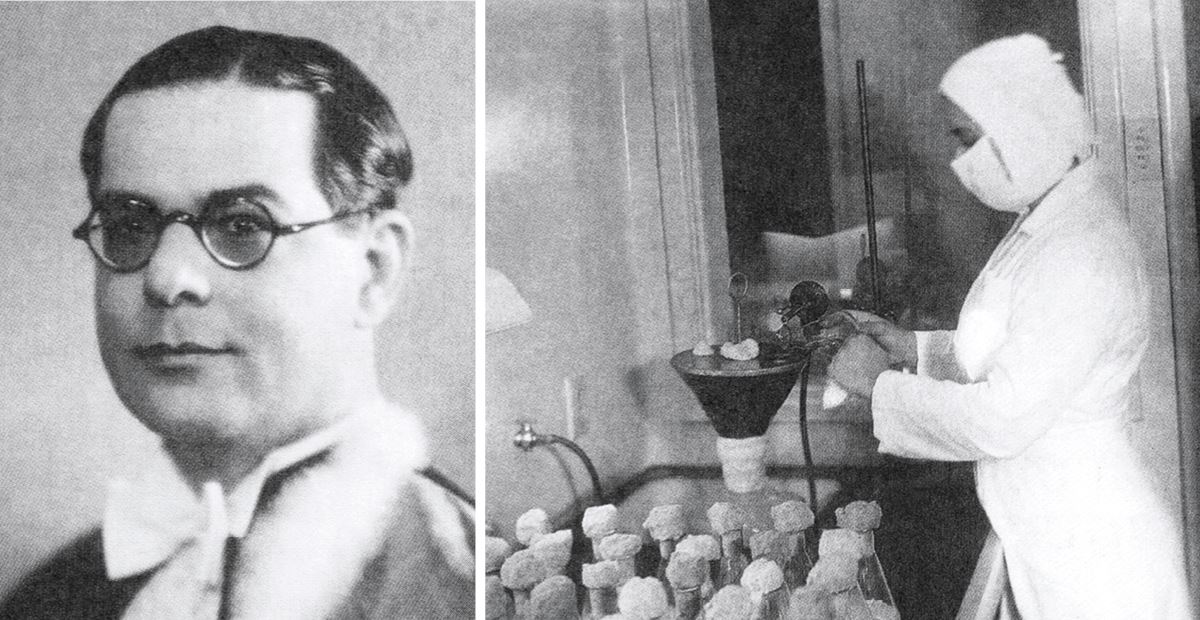 Arlindo Assis, who adapted the techniques for culturing the bacteria used in BCG, in Rio de Janeiro (right, in 1952)FAP Collection

On March 24, 1882, in a presentation at the Berlin Society of Physiology, Koch reported that he had found, in sick people and animals, what he called the tuberculosis bacillus, which was distinct from all other known bacteria. The following month a medical bulletin from the German capital published his lecture; Koch sent a copy to the Irish surgeon John Tyndall (1820–1893), who lived in London, and published an abstract in The Times on April 22. The New York Times reported the discovery on May 3, 1882, coining the name the bacterium has been called ever since, “Koch’s bacillus.”

Five years later, Carl Pflügge (1847–1923), Koch’s colleague and compatriot, showed that the bacillus could be transmitted through droplets released when coughing, or even by talking. This conclusion motivated the use of face masks to prevent spreading the disease, a measure now adopted against Covid-19.

Koch also formulated a vaccine candidate developed using disease-causing bacteria in 1890, called tuberculin. The formulation failed, although it has become a method for diagnosing the infection. In recognition of his work on tuberculosis, Koch was awarded the Nobel Prize for Medicine in 1905. 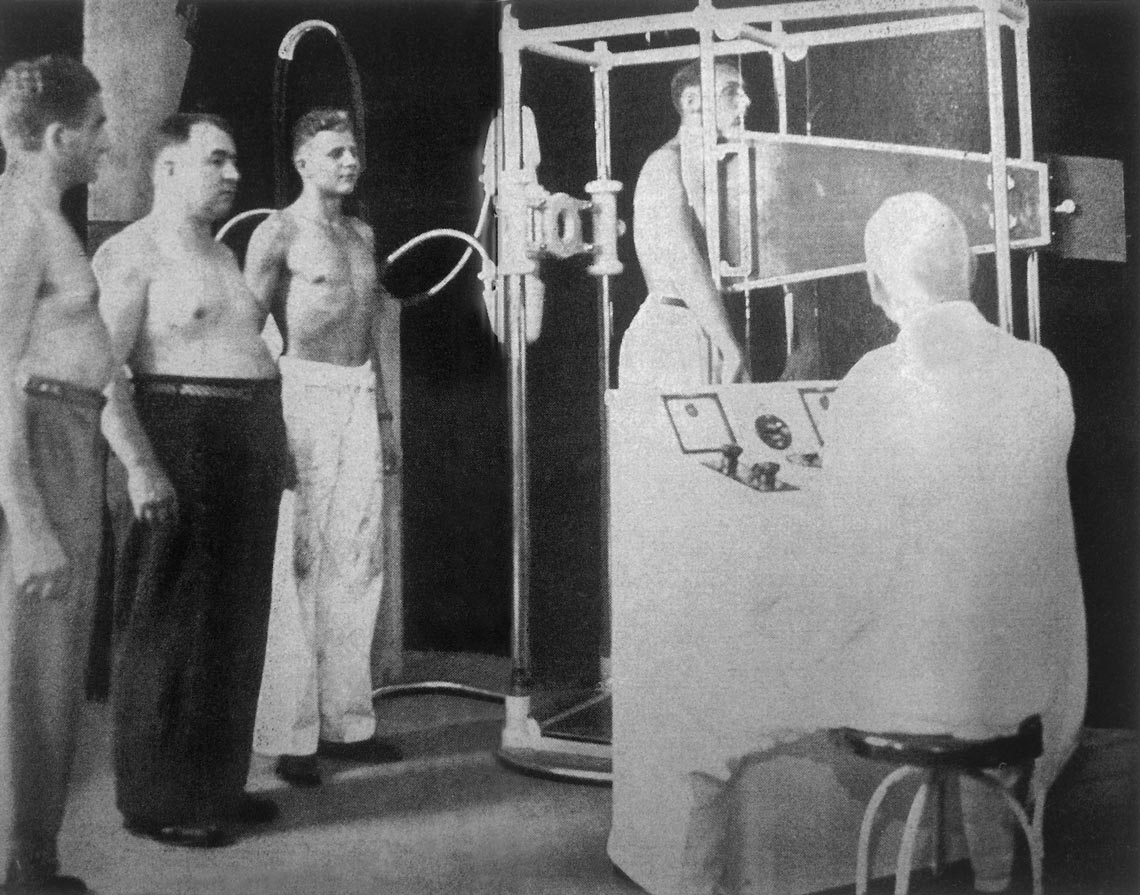 In 1908, at the Pasteur Institute unit in Lille, in northern France, bacteriologist Albert Calmette (1863–1933) and veterinarian Jean-Marie Camille Guérin (1872–1961) began to search for a vaccine based on a strain of M. bovis isolated from the udder of a cow with tuberculosis. They grew the bacteria in bile (a liquid produced by the liver) from cattle, with glycerin and potatoes. In 1921, after making 231 subcultures with decreasing virulence, they obtained a strain that could be injected into guinea pigs, rabbits, oxen, and horses without producing the disease, but which activated the defense mechanisms against the bacteria that caused it. Later that same year, the first test, given to a newborn child born to a woman with tuberculosis at the Charité Hospital in Paris, went well.

In 1925, Uruguayan bacteriologist Julio Elvio Moreau (dates of birth and death unknown), from the Pasteur Institute in Lille, delivered a sample of Calmette and Guérin’s attenuated bacillus and the recipe for making the vaccine to a friend in Rio de Janeiro, Bahian physician Arlindo Raymundo de Assis (1896–1966), at the School of Medicine of the future Fluminense Federal University. Initially working at Instituto Vital Brazil, Assis experimented with the so-called Moreau strain in rabbits and oxen.

In 1927 Assis moved with the bacilli and his equipment to the Brazilian League against Tuberculosis, the initial name of the FAP. The foundation received its current name in 1936, in honor of the legal scholar and Supreme Court justice Ataulpho de Paiva (1865–1955), who was a founding partner of the league. Assis monitored the first Brazilian BCG test, when pediatrician Almir Rodrigues Madeira (1884–1972) applied a dose to the newborn Therezinha de Jesus Lopes, on August 30, 1927.

“In 1930, with the expansion of health services in the state of Rio, the League stopped its healthcare work attending people with tuberculosis, and completely dedicated itself to the production of the vaccine, which was applied by teams from government agencies,” observes Nascimento. On the island of Paquetá, across from the city of Rio in Guanabara Bay, the league ran the Queen Dona Amélia Preventorium for children whose parents were infected by tuberculosis. 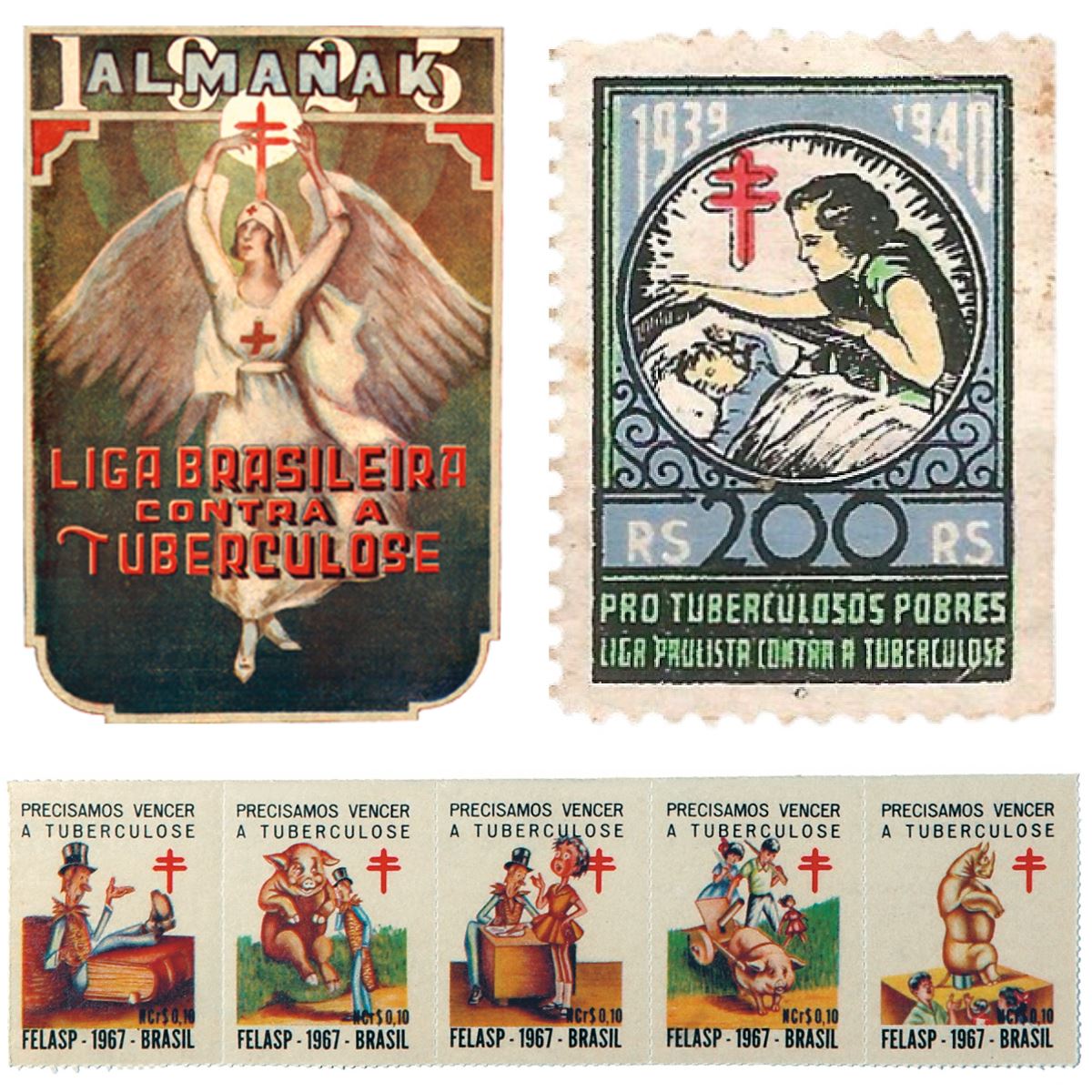 In 1936, São Paulo physician Manoel Dias de Abreu (1891–1962) obtained the first clear images from a device he had invented, based on X-ray technology, which allowed him to see signs of tuberculosis not detectable by other diagnostic techniques. His technique, which gained the name “abreugraphy,” also called chest photofluorography, was quickly adopted for mass diagnosis in Brazil (see Pesquisa FAPESP issue nº 228).

World War II made it difficult to import ingredients for the culture medium used to grow the bacteria that make up the vaccine. “Arlindo de Assis made another culture medium with very Brazilian, confidential ingredients, which worked very well and is still used today,” says physician Luiz Roberto Castello-Branco, scientific director at the foundation. “The culture medium must have favored mutations of the Moreau strain, which causes fewer side effects than those in other countries.” He believes it was also because of the war that the Pasteur Institute in Paris lost the French strain and asked the FAP for a sample of the strain being used in Brazil in order to continue producing vaccine in France.

In 1972, FAP began to produce the vaccine in lyophilized (dehydrated) form, which facilitates transport and conservation; after being reconstituted with saline solution, each 0.1 milliliter dose contains at least 200,000 live bacteria. BCG is also used to protect those living with people who have Hansen’s disease (leprosy), and to treat leishmaniasis.

The method of producing the vaccine has changed little. The bacteria multiply on the surface of a culture medium based on starch and amino acids, are then divided into other containers where they continue to grow, and after three months are purified, lyophilized, and packaged. FAP now plans to produce 7 million doses of BCG against tuberculosis and 100 million of a version used to treat bladder cancer. Castello-Branco says that as a result of the four-year interruption in production, the foundation is no longer the sole supplier for the Ministry of Health, which is now also supplied by the Serum Institute of India.

The Covid-19 pandemic made the fight against tuberculosis more difficult. “The pandemic has accentuated the barriers to accessing diagnosis and treatment, as hospitals have prioritized Covid-19 cases and fewer people are seeking medical help,” says psychologist Carlos Basilia, coordinator of the Brazil Tuberculosis Observatory, linked to the National School of Public Health (ENSP) of FIOCRUZ. “The pandemic wiped out 12 years of progress in the global fight against tuberculosis.”