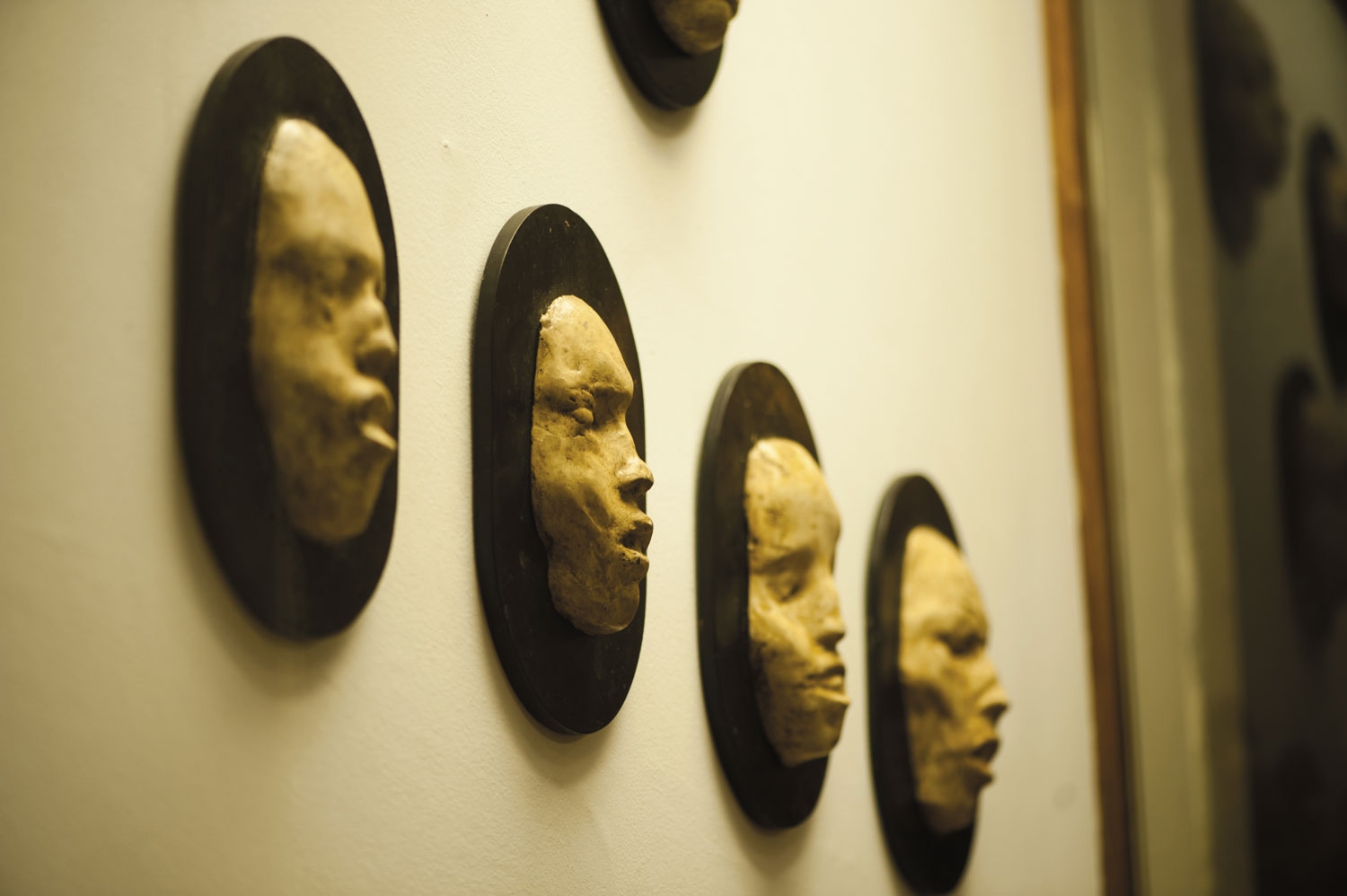 As one of the curators of the 3rd Bahia Biennial, São Paulo communicologist Ana Mattos Porto Pato entered the Estácio de Lima Museum of Anthropology and Ethnography in Salvador, Bahia for the first time on March 8, 2014. The museum, which had been closed to the public nine years earlier, occupied a room at the Nina Rodrigues Institute of Legal Medicine in the neoclassical-style Department of Public Safety building. Among dozens of cardboard and Styrofoam boxes, Pato and the team from the Museum of Modern Art of Bahia, which was responsible for organizing the Biennial, found photographs, documents, and approximately 500 artifacts, including weapons, folk art objects, medical instruments, and clothing, belonging to cangaceiros (northern outlaws). They also discovered hundreds of skulls with scarce information about the dates, authors, or locations regarding when, where, and by whom they were collected. The labels for two mummified bodies only stated that they were a “Carajá Indian woman” and a “half-breed.”

“We were confronted with a police museum and a history of pain, racism, and violence against the poor and marginalized,” Pato reported in a 2015 article in the journal Revista CPC, which is published by the Center for Cultural Preservation at the University of São Paulo (CPC-USP). In September 2017, when recalling the experience, she commented: “Sacred Candomblé objects seized by the police sat alongside deformed fetuses, weapons, and drugs.” She further examined the experience in her doctorate, which was completed at the beginning of this year at the School of Architecture and Urbanism at the University of São Paulo (FAU-USP) under the guidance of Giselle Beiguelman.

The opening of the boxes comprised another chapter in the debate about what to do with the collections of museums of criminal anthropology, which for some years have occupied academic environs in Bahia, Rio de Janeiro, and São Paulo. Researchers linked to the universities argue that the collections should be maintained and opened for public visitation, while social movements and family members demand the removal of the remains of close relatives still held by the museums. In general, the fates of collections such as these are uncertain throughout the world.

The field of criminal anthropology was created in the late nineteenth century by the Italian physician Cesare Lombroso (1836–1909), who applied biological determinism to the criminal field; he was confident that it was possible to identify a person’s propensity for criminality by means of their physical traits. Physicians from Bahia, Rio de Janeiro, São Paulo, and Pernambuco supported his propositions—which would prove to be unfounded decades later—to reinforce the idea of racial degeneracy. In vogue at the beginning of the twentieth century, racial degeneracy claimed that the country’s backwardness was a consequence of miscegenation with blacks and Indians, who were considered inferior. In São Paulo, German zoologist Hermann von Ihering (1850–1930), founder and first director of the Paulista Museum at the USP, defended the extermination of indigenous peoples.

In Salvador, Raimundo Nina Rodrigues (1862–1906), a physician and Lombroso follower, established a museum at the Bahia Medical School to house a collection of objects intended to attest to the inferiority of the Negro. In 1905, a fire destroyed the collection, which included the head of Antônio Conselheiro (Antônio Vicente Mendes Maciel, 1830–1897), the leader of the Canudos rebellion. In 1958, a disciple of Rodrigues, physician Estácio Luiz Valente de Lima (1897–1984), reopened the museum at the School of Medicine. Because he was also the director of the Nina Rodrigues Institute of Legal Medicine, Lima received the heads of seven cangaçeiros who had belonged to the gang led by the legendary Brazilian bandit Lampião, who was killed by police in 1938. Lima left them on display for decades on the grounds that they were a way of identifying criminal types. After intense debate, the families of the cangaceiros buried the heads in 1969. In 2010, after the museum had already been transferred to the Institute of Legal Medicine and as a result of negotiations that had begun approximately 10 years earlier, most of the Candomblé objects were transferred to the African Museum at the Federal University of Bahia (UFBA).

Burial
In 2014, after unpacking the collection, Pato proposed to a group of artists selected for the Biennial that they work with the objects. In an exhibition at the Public Archive of the State of Bahia, Minas Gerais artist Paulo Nazareth lay among the skulls and performed symbolic burial ceremonies for the two mummified bodies, which he placed in a wooden urn after an entire day of praying for them. Those who entered the exhibition saw the urn and the video, but not the mummified bodies.

The administrative documents from the Estácio de Lima Museum remain in the Public Archive, where they were placed for the 2014 exhibition. The documentary collection consists of 403 text documents, 697 iconographic documents, and 8 photographic negatives. They are organized and are only available for public viewing with the permission of the Department of Public Safety of Bahia, according to Teresa Mattos, the Archive’s director. Mattos adds that the board of the Pedro Calmon Foundation (FPC), in association with the Department of Culture of the State of Bahia, sent a letter to the Department of Public Safety requesting possession of the documents in February 2017. The director of the FPC, Edvaldo Mendes Araújo, says he hopes the material will be released for public viewing by November, which is Black Awareness Month, “to serve as an example of intolerance and religious discrimination.”

Lombroso was not as simple as his reinterpretations in Brazil, says UFBA anthropologist Livio Sansone

The management at the Department of the Technical Police of Bahia (DPT), through a note from their communications office, said that it recognizes the historical importance of the documents, understands the need for access to them and “is still evaluating the request for the permanent housing of the collection at the Public Archive of Bahia.” In March 2017, items from the collection used in the exhibition at the Public Archive were returned to the DPT, the administrative group responsible for the Estácio de Lima Museum, which remains closed.

Keep or Return?
Italian anthropologist Livio Sansone, a UFBA professor and one of the coordinators of the Digital Museum of African and Afro-Brazilian Memory, criticized the breaking up of the collection, which, according to him, should be kept together and open to the public as a way of promoting debate about social and racial segregation. “The skulls of the cangaceiro outlaws and the sacred objects of the Candomblé seized by the police elicit painful memories, but we have to deal with the contradictions instead of erasing everything,” he said. More generally, he pointed out, “we need a museological plan to organize institutions, set goals, and ensure the continuity of the collections.”

As an example of one possible course of action, Sansone cites the Cesare Lombroso Museum of Criminal Anthropology in Turin, Italy. Created by Lombroso in 1892 and closed to the public in 1914, it reopened in 2011 with a vast collection of skulls, mortuary masks, photographs, and pieces of skin from criminals. “Today’s organizers have created an anti-racism museum that discusses the mistakes of a scientific theory and maintains the items in the collection without repatriating anything,” commented the UFBA professor, who is also a researcher at the Italian museum. “Lombroso was not in favor of the massacre of native peoples or imperialism, nor did he believe that interbreeding could degenerate a people. He was not as simple as his reinterpretations in Brazil,” he stated.

The rights of ownership of ethnographic museums have been questioned in several countries. On the basis of international law, the Organization for African Unity rescued the body of a 27-year-old warrior killed in 1830 that had been taken to Europe by a French merchant and kept in a museum in Spain for 170 years. His body was buried in Botswana in 2000. In the United States, three museums in Seattle, Denver, and Chicago had to return objects and bodily remains to indigenous peoples in Canada from whom they had been taken. On the other hand, anthropologist João Pacheco de Oliveira, a researcher at the National Museum of the Federal University of Rio de Janeiro (MN-UFRJ), in a 2007 article in the journal Tempo, observed that “museums can be very useful for indigenous people who have undergone violent deculturation and have suffered from actions against their values, technologies, and beliefs. The museum is a powerful instrument for instilling and reinforcing identity boundaries, rejecting the prejudice and invisibility with which such communities are treated in other contexts.”

Black Magic
American art historian Amy Buono, a professor at the University of California, Santa Barbara, considers the Rio de Janeiro Civil Police Museum an example of “a parable for understanding how Brazil’s material culture intersects with institutional power and disciplinary practice,” as she wrote in a 2015 article in the Getty Research Journal. Created in 1912 at the former police headquarters, the museum served as a classroom for corps students and was opened to the public in the 1930s. Like the Estácio de Lima Museum, it brought together objects considered illegal: weapons, gaming materials, drugs, counterfeit money, Nazi banners, and objects from Candomblé worship sites.

The images, musical instruments, gourds, conch shells, and other religious items formed the Black Magic Collection; these were registered in 1938 by the National Institute of Historic and Artistic Heritage (IPHAN). The fate of this collection, which is not on public display, is also uncertain. In June of this year, Mothers of Saints (Candomblé priestesses), black movement activists, intellectuals, and politicians launched the Libertem Nosso Sagrado (Free Our Sacred Objects) campaign through the Human Rights Commission of the Legislative Assembly of Rio de Janeiro. They plan to reclaim approximately 200 objects placed in a collection and in a museum that expresses religious prejudice.

Preto Amaral
“We should not destroy the museums’ collections, but rather recapture the memories to show the horrors that we are still living,” suggested historian Paulo Fernando de Souza Campos, a professor at Santo Amaro University (UNISA) in São Paulo. In his doctorate, he revived the story of miner José Augusto do Amaral (1871–1927). A son of slaves freed by the Law of Free Birth and unemployed after deserting the army, Preto Amaral (Black Amaral, as he was known) was arrested in São Paulo on charges of having sexually violated and murdered three teenagers. Physician Antonio Carlos Pacheco e Silva (1898–1988), director of the Juquery Hospital and originator of the School of Psychiatry at USP, “used the case of Preto Amaral to apply the theory of the degeneration of races,” stated Paulo Campos. “To medical science and the law of the early twentieth century, the Negro was a born criminal,” he said.

Amaral died of tuberculosis five months after being arrested without ever going to trial, and he was considered Brazil’s first serial killer. In 2006, the Companhia de Teatro Pessoal do Faroeste (People of the Wild West Theater Company) staged the play “The Crimes of Preto Amaral”, which was based on his story, and in 2012, the Office of the Public Defender of the State of São Paulo organized a symbolic trial at the USP School of Law. In it, Preto Amaral was acquitted for lack of evidence.

The São Paulo Police Museum, which is known as the Crime Museum and is part of the Police Academy based within the USP (Cidade Universitária campus), kept a bust of Preto Amaral on display. At the request of relatives, the piece was removed from the exhibition space and stored. “It could have been kept on display,” Campos said, “to show how medicine and the law constructed a representation of blacks as criminals.”