Researchers who violate ethical standards, by fabricating data or plagiarizing the work of others, for example, are generally punished administratively through funding suspensions, bans on supervising students, or dismissal. Rare cases of criminal charges almost always relate to cases where the effects were not limited to the academic environment. In 2015, for example, Dong-Pyou Han, a former biomedical researcher at the University of Iowa, USA, was sentenced to four and a half years in prison for manufacturing and falsifying data in clinical trials of an HIV vaccine. The criminal proceedings arose mainly because his acts of fraud constituted a threat to public health.

The idea that scientific misconduct should be treated as a crime has gained momentum in recent years, with numerous papers published discussing the need for more incisive approaches to curb the growing number of cases. A study published in the journal Medicine, Health Care and Philosophy in August examined the potential benefits and limitations of criminalizing ethical breaches in science. One of the advantages, notes the article, is that punishments would be applied more consistently and fairly. “In the current system, universities decide how to deal with cases of misconduct,” said one of the authors, William Bülow, a professor at the Department of Philosophy of Stockholm University, Sweden. “This process can potentially be arbitrary and unpredictable because it allows researchers who have committed the same type of misconduct to be treated differently depending on the institution where they work.”

One limitation highlighted by Bülow is the difficult nature of determining which cases deserve to be punished by the law. “It is important to note that not all instances of fraud, for example, are harmful to the point of constituting a crime,” he says. According to Bülow, the main risk is that scientists who have made unintentional mistakes could end up facing criminal investigations. “We need to be cautious regarding the number of issues that should be treated as a crime,” he says. 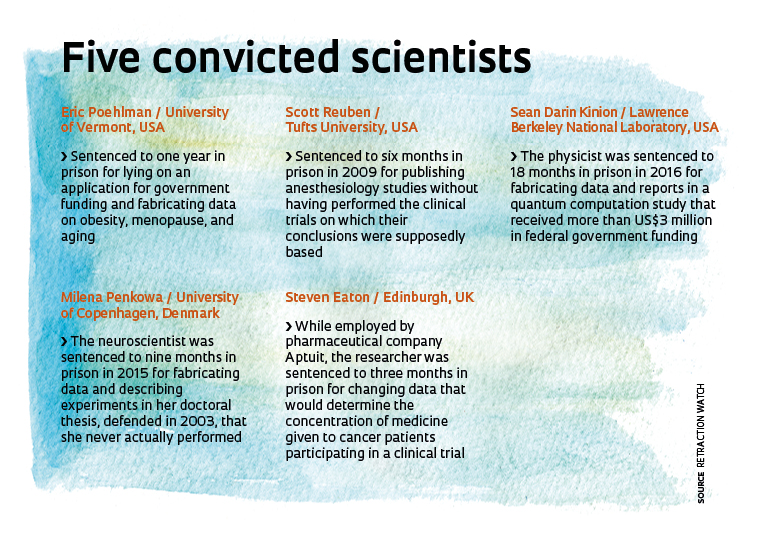 Serious fraud
In the last decade, several authors, such as Benjamin Sovacool, from the University of Sussex, UK, and Julian Crane, from the University of Otago, New Zealand, have argued for the need to criminalize at least the most serious forms of scientific fraud, especially data fabrication, falsification, and plagiarism. Bülow, however, argues that restricting criminalization to only some types of misconduct fails to consider the complexity and diversity of ethical violations. “Other forms of misconduct, such as selective reporting, negligence, and inappropriate use of statistics, are often excluded from criminalization proposals,” he says. The Swedish researcher believes that these dubious practices are also serious and should not be tolerated.

One of the main arguments in favor of criminalizing scientific misconduct is that harsher penalties could help curb intentional fraud. Rita Faria, a professor at the School of Criminology at the University of Porto, Portugal, says that there are weaknesses in this line of thought. “In society, crimes do not stop being committed just because they are criminalized,” she says. According to Faria, individual punishment could result in scientific institutions neglecting their responsibility to prevent misconduct by creating educational programs and promoting research integrity. She argues, however, that criminological perspectives should be applied in studies analyzing scientific misconduct.

In a book chapter published in September, she draws a parallel between scientific misconduct and white-collar crime, which is usually committed within companies or public agencies. “White-collar crimes, such as counterfeiting and money laundering, are committed in pursuit of financial profit. Comparatively, scientists who falsify data do so in an attempt to guarantee further research funding. And in both cases, the fraud is mostly perpetrated by middle-aged men at the peak of their careers,” she says.

A study published in 2017 showed that it is still rare for cases of scientific misconduct to be punished through the legal system. Journalist Ivan Oransky, founder of the website Retraction Watch, identified 39 researchers from seven countries that have been criminally charged between 1979 and 2015. The sanctions ranged from having to pay restitution and fines, to prison sentences. The cases were identified by searching Google and Retraction Watch using keywords such as “scientist” and “charged.” “Of the 39 scientists charged with a crime, only 14 were convicted for issues directly relating to their research,”
says Oransky. Of this total, three faced criminal charges related exclusively to scientific activity, while the other 11 had also committed other crimes, such as misappropriation of funds or bribery. Two investigations have resulted in charges against multiple researchers—seven scientists in China were charged with embezzlement and four in the United States with bribery. Only five of the more than 250 cases of scientific misconduct punished by the US Office of Research Integrity (ORI) in the same period led to legal penalties.