The area covered by water from the Solimões river and its tributaries may have been four times larger between 250,000 and 45,000 years ago (what it looks like today, above)

Much of the current landscape in central and western Amazonia was formed around 45,000 years ago. According to a study published in the journal Quaternary Science Reviews in March, non-flooded forest known as terra firme was formed as a result of changing river courses and shrinking floodplains. Between 250,000 and 45,000 years ago, várzea type wetlands in the region may have been as much as four times larger than today—one and a half times the size of the entire state of São Paulo. As these wetlands reduced in size, the trees that grew there, which were up to 20 meters (m) high and partly submerged for a good part of the year, were replaced by the surrounding terra firme forest, which is more biologically diverse and whose trees grow as tall as 60 m. It was this process, according to the authors of the study, that gave rise to the current landscape in this region of Amazonia.

“The process of rivers being reshaped, wetlands receding, and terra firme taking over has probably occurred several times over the last two million years in this region of the Amazon,” says geographer Fabiano Pupim, from the Diadema campus of the Federal University of São Paulo (UNIFESP), who coordinated the study. The conclusions were reached by calculating the burial age of sediment samples from 25 points along the banks of a 1,000-kilometer stretch of the Solimões river, between the cities of Manaus and Santo Antônio do Içá, in October 2015. The changes may have occurred over an area of one million square kilometers (km2), equivalent to about 20% of the rainforest that covers northern Brazil and parts of its neighboring countries. The study is part of the Biota Dimensions program promoted by FAPESP and the US National Science Foundation, which brings together Brazilian and American scientists in search of an integrated perspective of natural phenomena.

The results reinforce the previous findings of geologist Dilce Rossetti, from the Brazilian National Institute for Space Research (INPE). In a series of studies, started in 2005 with an article in Quaternary Research, Rossetti’s team analyzed 250 sediment samples, finding that the sedimentary soils of central Amazonia formed in the last 380,000 years. “There is no doubt that the central region of the Amazon rainforest really is very young,” she says. In collaboration with biologists, Rossetti identified that the terra firme forests around the river Madeira underwent several phases of expansion between 6,000 and 920 years ago, as detailed in an article published in the journal Ecosphere in 2018. 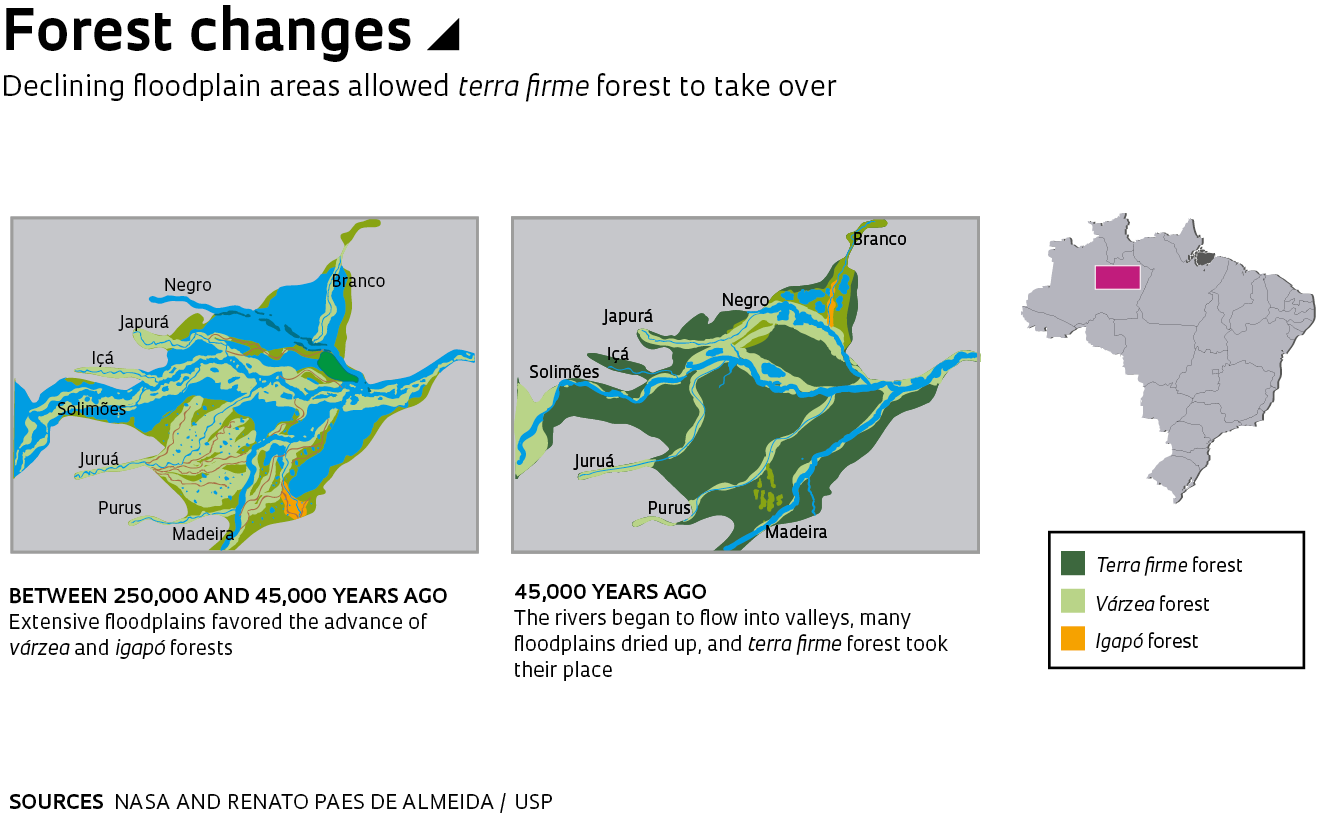 River courses
Geologist Renato Paes de Almeida, a researcher from the Geosciences Institute of the University of São Paulo (USP) who works with Pupim, illustrates the changes using a Google Earth image with a series of white winding lines fanning out from the Solimões river and one of its tributaries, the Juruá. The lines correspond to channels that carried water in the remote past but later dried up. “The current river courses we see in central and western Amazonia are less than 45,000 years old,” he explains.

He does not rule out that changes may have occurred even more recently. Rossetti found that some stretches of the Madeira river have moved 30 km to the east over the last 40,000 years, and a middle section of the Branco river connected with another river about 18,000 years ago, making it a tributary of the Negro river. Major river course changes occurred over even less time in the Pantanal, such as the Taquari river, whose mouth has moved about 100 km in less than 20 years.

According to Rossetti, the changes are caused by rainfall variations, which alter the volume of sediment transported by the rivers, as well as by movements in the layers of rock that form the Amazon basin, called tectonism. “In Humaitá, in the south of the state of Amazonas, we found sedimentary deposits that formed after a seismic shock occurred there about 1,800 years ago,” says the researcher. “Tectonic movements usually lower land levels, increasing flooded areas and killing off vegetation en masse.”

Both research groups—one from USP and UNIFESP and the other from INPE—found Podocarpus, Ilex, and Alnus pollen grains in the sediment of central Amazonia, plants usually found in colder forest environments, such as the Andes. According to Austrian geologist Andrea Kern, from the USP group, the diversity of pollens suggests changes in vegetation structure. Rossetti adds: “Sub-Andean plant species were able to adapt to the middle of the Amazon rainforest before the last glacial maximum, between 38,000 and 32,000 years ago.”

From a biological perspective, the most visible implication of these changes was the reduced area of two types of floodplain forest: igapó, which is a type of forest periodically flooded by blackwater and clearwater rivers such as the Negro river and the Tapajós river, respectively; and várzea, which is seasonally flooded by whitewater rivers like the Solimões river. These have been replaced by terra firme forest, which is never flooded.

The decrease in wetland areas may also have influenced other transformative processes in the region. “From time to time, plant and animal communities have to undergo major changes, depending on the size of wetland and terra firme areas,” says biologist Camila Ribas, a researcher at the National Institute of Amazonian Research (INPA) and coauthor of the article in Quaternary Science Reviews.

According to Ribas, varying levels of connectivity between animal and plant populations caused by adaptation to different environments influences how species are distributed, leading to isolation or expansion. “Terra firme birds have flourished in the central Amazon, while lowland birds have declined in number,” she says. “Transformations of the landscape were likely the cause of many recent changes in species distribution, explaining the great biological complexity we see in the Amazon today.”