A study of 20 cities in different Latin American countries has revealed the emergence of a new agent—armed groups engaged in illicit activities such as drug trafficking and contraband—as the leading cause of instability in the region over the past 15 years. “Until the 1990s, conflicts between States were the predominant factor. Today, non-state actors are the principal sources of violence in the region, in what some researchers are referring to as a “new war,” says lead author Rafael Antônio Duarte Villa, a professor in the Department of Political Science at the School of Philosophy, Languages and Literature, and Humanities at the University of São Paulo (FFLCH-USP).

A 2017 World Bank report ranked Latin America and the Caribbean as the most violent region in the world, with 24.7 homicides per 100,000 inhabitants. “In many Latin American nations, social violence has increased to warlike levels. Of the top 50 most violent cities in the world, 42 were in the region,” says the report. According to Villa, the drug trafficking economy and drug cartels emerged first in cities in Colombia and Mexico in the mid-1980s. “But in the following decades the drug trade became widespread,” he says.

Accounting for a significant portion of the illegal economy, the actors involved include smugglers and drug traffickers such as the infamous Mexican drug cartels; paramilitary groups in Nicaragua and Venezuela; the Bacrim, or criminal gangs, in Colombia; and drug gangs like the Comando Vermelho (CV) and Primeiro Comando da Capital (PCC) in Brazil. “They have also led to the emergence of new forms of government to fill the vacuum where states have failed to meet basic needs such as physical protection and social well-being—especially among the most vulnerable population,” says Villa. As a result, some areas in Latin American cities now have a government model that involves both state and non-state organizations. To arrive at their findings, Villa and political scientist Camila de Macedo Braga, a member of the project team, held more than 120 interviews since 2018 with government officials and civil servants, including federal police, representatives of the Armed Forces, diplomats, mayors, councilors, public security secretaries, public prosecutors, civil society, community leaders, researchers, and representatives of nongovernment organizations engaged in conflict mediation or public programs, in countries such as Venezuela, Colombia, Bolivia, Nicaragua, Paraguay, Mexico, Brazil, and Honduras.

Drug trafficking and smuggling are a common threat to nations in the region, says Villa, but one that has not been dealt with in a cooperative manner. Although there are forums on combating drug trafficking and other illegal activities, such as the Inter-American Observatory on Drugs—a committee created in 2000 by the Organization of American States (OAS)—there is currently no institution with the decision-making power or capabilities to develop and implement transnational measures to deal with these challenges. “Some countries consider these to be domestic issues and that transnational strategies could threaten their sovereignty,” says Villa.

Another recurring response from countries like Brazil, Mexico, and Colombia has been the use of the Armed Forces against drug traffickers and smugglers. “The military occupation of Rio de Janeiro in 2018 is an example of this,” says the USP researcher. Héctor Luis Saint-Pierre, coordinator of the Institute for Public Policy and International Relations and a professor in the San Tiago Dantas Joint Graduate Program in International Relations at São Paulo State University (UNESP), the University of Campinas (UNICAMP), and the Pontifical Catholic University of São Paulo (PUC-SP), notes that the Washington Consensus introduced in 1989 called for Latin American states to use their Armed Forces to combat “new threats” of continental scope, including drug trafficking, with the support of US military aid.

“Countries had different initial reactions to the new guidelines. While Colombia, for example, accepted military aid from the US in the 2000s to help fight drug traffickers, Brazil saw it as a threat,” says Saint-Pierre. This has since changed and countries across the continent have increasingly deployed the military for non-war missions. “However,” he says, “I think that more than a visible presence of police on the streets, the problem of drug trafficking requires international mechanisms for cooperation among judicial, police, and financial-intelligence agencies to intercept transnational money laundering, for example.”

In relation to the role that Brazil has played in this regional context, Oliver Stuenkel, of the Fundação Getulio Vargas (FGV) School of International Relations in São Paulo, explains that the country has historically kept a low profile in affairs involving the region. Before the mid-1990s, Brazilian heads of state seldom visited their South American neighbors. “This is remarkable if we consider the historical challenges facing countries in the region in areas such as drug trafficking, smuggling, and the environment,” he says. Whereas studies have shown that those States that have a dominant weight in a given region will generally attempt to exert leadership in its affairs, Brazil has failed to take a prominent role in solving challenges affecting Latin American nations, despite occupying half the territory and being the largest economy on the continent. 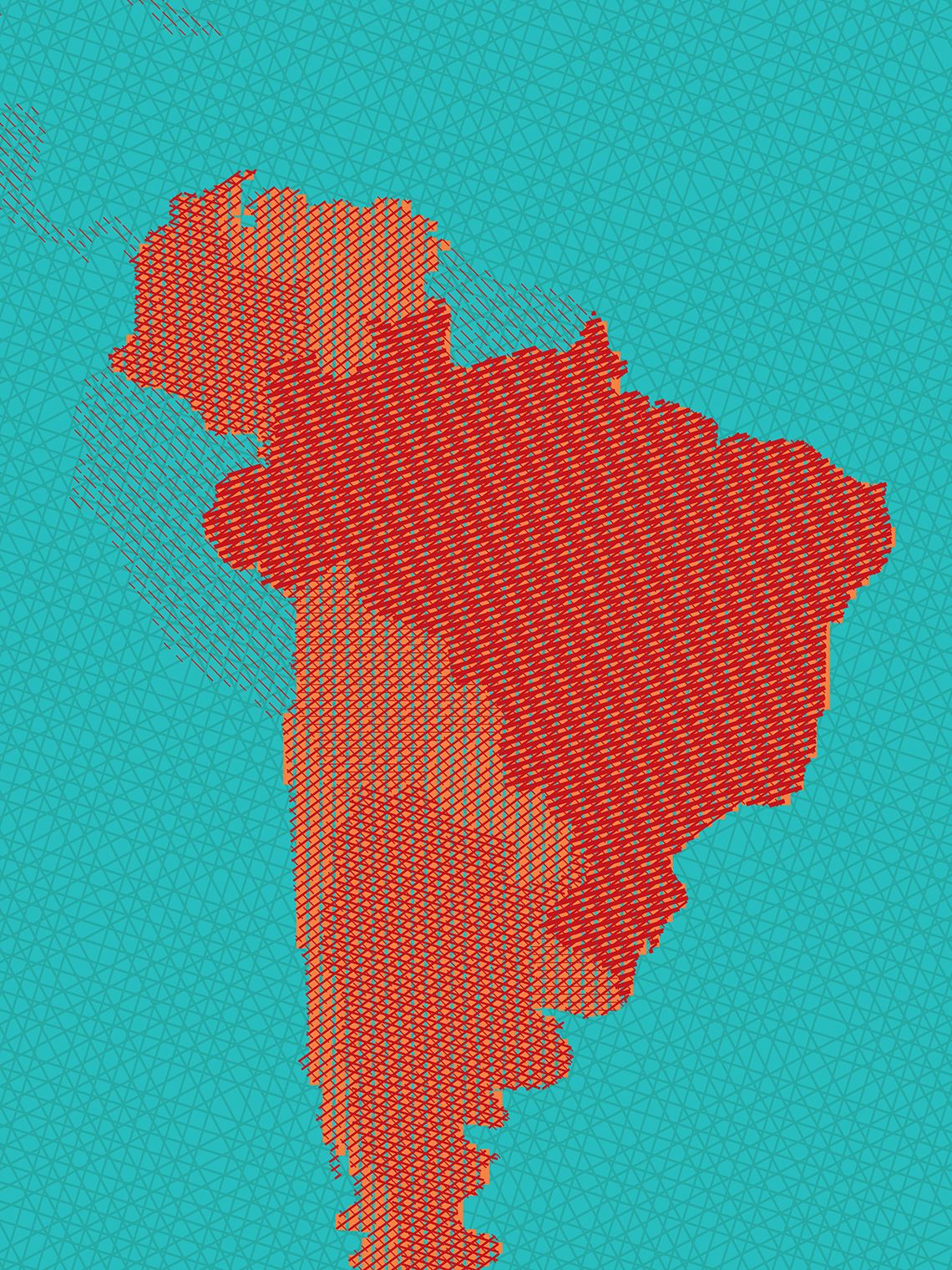 Bruno AlgarveStuenkel investigated this phenomenon in a recent study in which he reviewed official documentation and interviewed chancellors and former chancellors, former presidents, diplomats, and politicians involved in foreign policymaking in different South American countries. Despite its economic growth, political stability and global ascension in the decade starting in 1995, Brazil’s ability to influence the region remained limited, says the researcher. Stuenkel found that Brazilian leadership in dispute resolution has occurred only incidentally, as was the case in the Brasília Peace Accord signed in 1998 between Ecuador and Peru to end a decades-long territorial dispute. “By mediating an amicable resolution of the dispute, Brazil helped to open dialog between the two nations and to create a normative framework under which democratic rules would be observed in the region,” he says.

This was in contrast, Stuenkel recalls, to the 2010 diplomatic crisis when the Venezuelan government severed relations with Colombia over its allegations that Venezuela was harboring guerrillas of the Revolutionary Armed Forces of Colombia (FARC). “Brazil was expected to mediate the resolution of the dispute, but didn’t. In interviews with members of the Colombian government, we learned that Brazil declined to help even at Colombia’s request,” he says. Brazil’s foreign-policy stance, explains Stuenke, was that if the country aggressively pursued regional leadership, it could be seen as a threat by its neighbors. “As a result, Brazil’s role in crisis resolution has been limited and dependent on the size of the conflict, geopolitical interests, and ideological alignment with the government of the country in question,” he says.

These conclusions were drawn from a review of documents from the ministries of foreign affairs of Brazil and countries such as Bolivia, Paraguay, Uruguay, and Argentina, as well as from interviews. Throughout the year, these interviews will be available in a database kept at the Center for the Research and Documentation of Contemporary Brazilian History (CPDOC), at the FGV School of Social Sciences. In Paraguay, Ecuador, Bolivia, and Venezuela, organized archives of official documents—both historical and recent—are either lacking or not publicly available, says Stuenkel. Placing these documents in the CPDOC database will allow other researchers to expand the scope of their research beyond Brazilian diplomatic sources.

The studies by Villa, Braga and Stuenkel are part of a recent series of ​​investigations in international relations (IR) that aim to diversify both the objects and the sources of research. Up to the 1990s, Brazilian studies in the field were produced by diplomats and primarily focused on examining decisions by the Ministry of Foreign Affairs (MRE), as well as trade matters. Over the years, with the consolidation of the country’s democratic process, researchers have also turned their attention to Brazil’s standing on the international stage and regional integration efforts.

The first undergraduate IR program in Brazil was created in 1974 at the University of Brasília (UnB), with diplomats forming most of the faculty. Beginning in the 1990s, a period that saw a growing presence of multinationals in the country, additional undergraduate programs were created at private universities primarily, and the first graduate programs were structured. While IR studies in the 1980s revolved around the policies formulated by the Brazilian Ministry of Foreign Affairs, the creation of the first graduate programs in the following decade led to research into States’ interactions with each other, i.e. their cross-border dynamics. “In the last 20 years, studies have also addressed the interactions between the external landscape and domestic policy, a trend that has intensified in the last decade,” says political scientist Marcelo de Almeida Medeiros, a professor of comparative international policy studies at the Federal University of Pernambuco (UFPE).

“IR research has ventured beyond traditional domains involving national security and defense to cover social issues such as migration, labor, technology, and health,” notes Amâncio Jorge Silva Nunes de Oliveira, a professor in the Department of Political Science at FFLCH-USP and scientific coordinator of the Center for International Negotiation Research at the Institute of International Relations (CAENI-IRI-USP). The research agenda has mirrored the development of Brazil’s diplomatic strategy, says Nunes. In the 1980s, Brazilian diplomacy was based on an economic model that sought to displace imports. “Brazil then had limited influence on the international scene, but in 1990 began to expand its engagement in the world economy, leading to a shift in diplomacy. The Ministry of Foreign Affairs adopted new priorities and worked to create a regional economic model, achieve integration with countries in the Southern Cone and expand Brazil’s participation in multilateral organizations, such as the World Trade Organization [WTO],” says Oliveira. The last five years have witnessed a new shift, he says, with Brazil no longer regarding its relations with the global South as a priority. “There has been a drastic change in alignment with global partners as Brazil tightens its ties with the US,” he concludes.