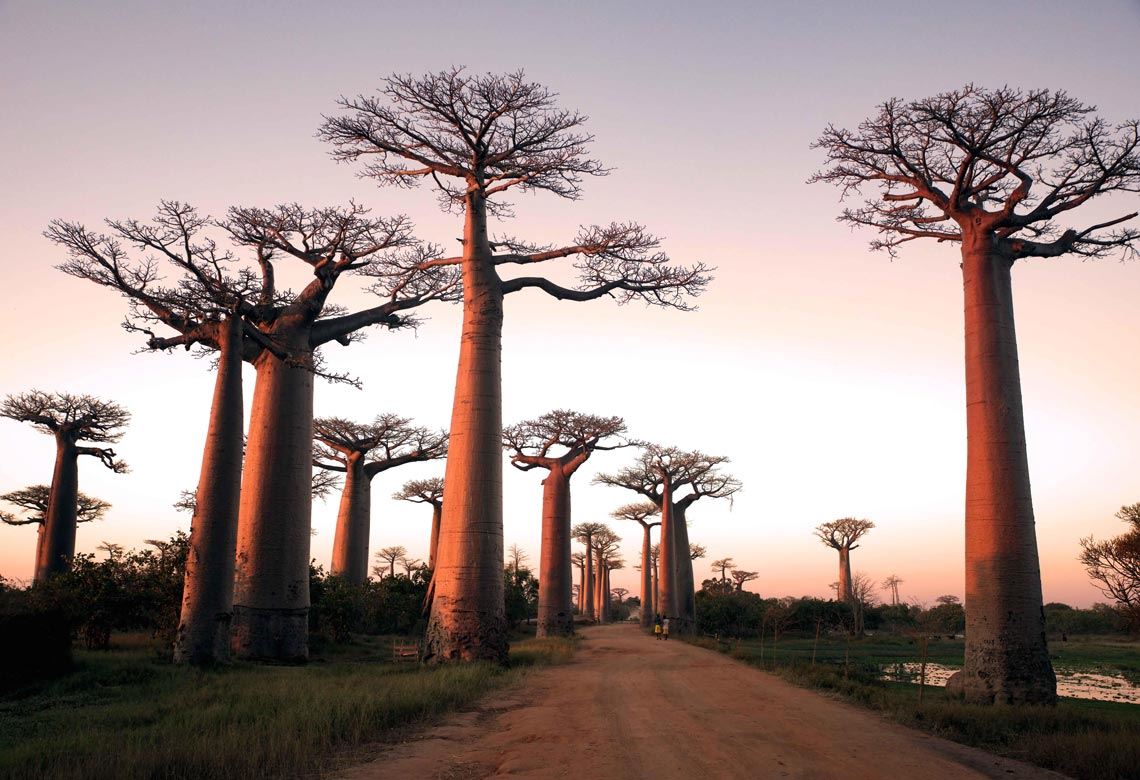 A road flanked by baobabs, a tropical species that can live for over 1,000 years, in Madagascar

A new paper by a group of Brazilian biologists provides insight into how climate affects tree growth and longevity in tropical and temperate forests around the world. In a collaboration with European and Chilean colleagues, the researchers analyzed tree longevity and growth rates based on tree-ring data for 3,343 populations and 438 different tree species, including 284 tropical species and 154 temperate ones. Their findings show that, on average, warm-climate trees grow twice as fast as those in temperate or boreal forests. But lifespans in the tropics, at least for the species they analyzed, are typically much shorter. While the tropical tree species they studied live for an average of 186 years, species at higher latitudes have an average lifespan of 322 years.

The researchers compiled data from 200 previous studies on tropical species in Amazon, African, and Asian forests, and on temperate species in both hemispheres including North America, Europe, Asia, Argentina, and Chile, and in areas in New Zealand and Australia, such as Tasmania. “Our research goes contrary to the belief that there are lots of thousand-year-old trees in the tropics,” says botanist Marcos Buckeridge of the Institute of Biosciences at the University of São Paulo (IB-USP), who led the study, published on December 14 in PNAS. That is not to say there are none, but that they are less abundant than previously thought.

The longest-living tropical species, according to the paper, is the baobab (Adansonia digitata), the only warm-climate species known to live for longer than 1,000 years. “These trees, which grow in African savannas, can store large volumes of water in their succulent stems. This allows them to grow rapidly while also living to a very old age,” says Giuliano Locosselli, an expert in tree-ring dating and the lead author of the paper. Locosselli completed doctoral research under Buckeridge at USP before recently joining the Botanical Institute of São Paulo. “Their water storage capacity allows these trees to reach a massive size without experiencing water stress. The largest individual is roughly over 9 meters in diameter.”

The second longest-living tropical tree species after the baobab can live for around half a millennium. Found in Central America, Hymenolobium mesoamericanum can reach an age of 560 years, according to the study. Teak (Tectona grandis), a hardwood species native to Asia that has been introduced in Brazil, has a lifespan of up to 523 years. A species endemic to Brazilian biomes, but present in much of Latin America, the guanandi (Calophyllum brasiliense) lives to an average age of 490 years.

Data compiled on trees in colder and drier forests show that these species have much longer lifespans. In extratropical regions, the oldest trees can live well past a millennium. Of the tree populations analyzed in the study, the three longest living are a trio of pine species native to North America: Pinus resinosa (2,006 years), Pinus longaeva (1,965 years), and Taxodium distichum (1,621 years). The first of the three can grow up to 50 m tall.

The study also analyzed whether the age and growth rates of tree species in tropical lowland forests are affected by changes in temperature and water availability. Their findings are concerning, especially in the current context of progressive global warming from rising greenhouse gas concentrations. “The lifespans of tropical trees decrease significantly under dryer and warmer conditions in the tropics, likely affecting the dynamics of forests and their ability to remove carbon from the atmosphere and store it as biomass. These changes can disrupt entire food chains, not only in these ecosystems but also in temperate forests,” says Buckeridge. “We’re sounding a red alert because our work shows that mortality among the oldest-living trees increases sharply when mean annual temperatures exceed a threshold of 25.4 °C.”

For this component of their study, the researchers used a climate model developed by the UK’s Hadley Centre, one of the major models adopted by the United Nations (UN) Intergovernmental Panel on Climate Change (IPCC). Based on this model, the 25.4 ºC threshold will be reached in tropical regions between 2030 and 2050. Many studies have suggested that a higher concentration of carbon dioxide (CO2), the dominant greenhouse gas in the atmosphere, can act as a fertilizer for many plant species. In tropical environments, this would cause forests to grow and build up biomass more rapidly, which would in theory be beneficial for the climate. Plants would then remove part of the excess carbon in the atmosphere, helping to counter global warming. The problem, according to the study, is that while trees would grow faster, they would also die sooner because of the higher temperatures.

In warm tropical lowlands, for example, where broadleaf tree species are dominant, the PNAS paper found a consistent decreases in tree longevity in dryer regions when annual mean temperatures exceed 25.4 °C. “This could explain observed increases in tree mortality in tropical forests, including the Amazon, and shifts in forest composition in western Africa,” says Locosselli. The study results suggest that conditions supporting only lower tree longevity in tropical lowlands are likely to expand under future drier and especially warmer climates. “There could be a shift in species composition in tropical forests, but not wholesale mortality,” says Locosselli.

David Lapola, an ecologist at the Center for Weather and Climate Research Applied to Agriculture, at the University of Campinas (UNICAMP), says that while the new paper provides some interesting findings, further field observations are needed to provide a clearer picture of what could happen to the world’s forests as a result of global warming. “Many studies in the Amazon, for example, have indeed shown that tree lifespans are declining. But tree-ring data do not account for an important trend observed in loco that could offset the decreasing longevity: although trees are now dying sooner, new trees are also sprouting up faster,” says Lapola.

He also believes there is no evidence to support a prediction that 100 or 200 years from now, tropical forests will have less biomass and will undergo savannization. “Declining longevity has limited implications and is not the only factor controlling forest dynamics,” analyzes Lapola. “Other functional changes could occur, such as a proliferation of species that are more resistant to drought,” he says.