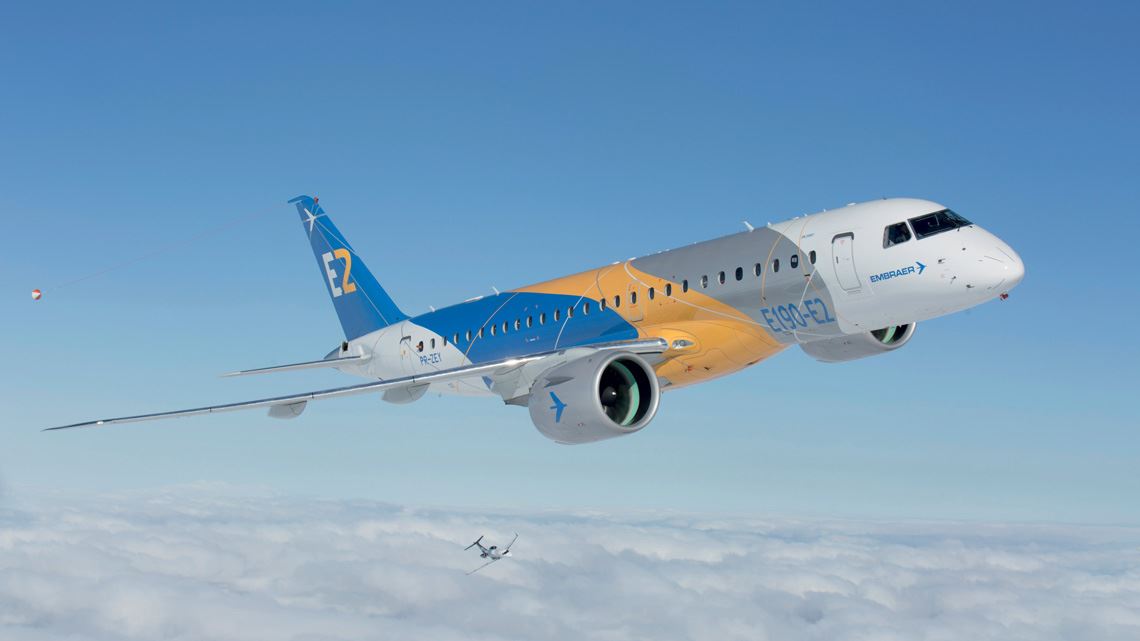 Year 2020 will be one to forget for Embraer. With the outbreak of the novel coronavirus pandemic, the aircraft maker, based in São José dos Campos, southeastern Brazil, was hit by a perfect storm. On the one hand, the pandemic severely impacted the global airline industry, causing new aircraft sales to plummet. And to make matters worse, Boeing announced in April last year that it would withdraw from a deal it had signed in 2018 to acquire Embraer’s commercial aviation division, where its highly successful E-Jet family is produced. The Brazilian company would have received an injection of US$4.2 billion for the division, and would gain a 20% stake in a newly created joint venture, with the remaining 80% held by the US aviation giant (see Pesquisa FAPESP issues 268 and 291). The cancellation of the deal led to an arbitral dispute that remains pending, with the former would-be partners blaming each other for the agreement going sour.

The effects from such a turbulent year were visible in Embraer’s balance sheet at year-end 2020. Aircraft deliveries dropped by 34% from the previous year (130 units compared to 198) and the company’s order backlog shrank by 15%, to US$14.4 billion. Total revenue across the commercial aviation, executive jets, and defense and security divisions fell by 10% to R$19.6 billion, hurt primarily by poor performance in the commercial aviation division, while net losses nearly tripled from R$1.32 billion to R$3.62 billion. “The pandemic has meaningfully impacted the results of our business,” Embraer CEO Francisco Gomes Neto acknowledged in an earnings call in 2020. “2021 will still be a challenging year as the crisis has not ended yet and the scenario remains uncertain and volatile.”

To return to growth, Embraer has made innovation a core element of its new business plan for 2021 through 2025. “Amid this difficult time, we have continued to invest in innovation because we know that technological development is an imperative to compete in the global market,” engineer Luís Carlos Affonso, Eletrobras’s senior vice president for Engineering, Technology Development, and Corporate Strategy, told Pesquisa FAPESP. “We’ve identified several key innovation levers, or areas where we want to innovate and which we see as are crucial to our continued competitiveness and longevity as a business. These include sustainability, electric propulsion, autonomous flight, aerodynamic efficiency, and artificial intelligence.”

Plans have been created for each of these areas to ensure the company can continue to design and build competitive aircraft, says Affonso. “We’re investing in open innovation projects, building partnerships with science and technology institutions and other companies, and approaching research funding agencies for support,” he says. This research is being spearheaded by the company’s renowned engineering team, one of its biggest assets. “Engineering is among Embraer’s greatest strengths. We have approximately 3,500 development engineers forming a central research body spanning all business units,” he explains.

One of Embraer’s most recent research projects, a collaboration with researchers from USP’s São Carlos School of Engineering (EESC), found that minute changes in wing geometry can decrease aircraft noise by around 20%. The project, launched more than 10 years ago, received funding of R$3.7 million from FAPESP through the Research Partnership for Technological Innovation Program (PITE).

The engineering department is also where early studies preceding the development of new aircraft are carried out. One new project, a passenger turboprop for regional flights, with versions seating 70 and 90 passengers, will compete in a market currently dominated by Franco-Italian aircraft manufacturer ATR. The goal of the project is to develop advanced aircraft with 25% more seats than the competition, 20% more speed, and 15% lower operating costs per passenger. 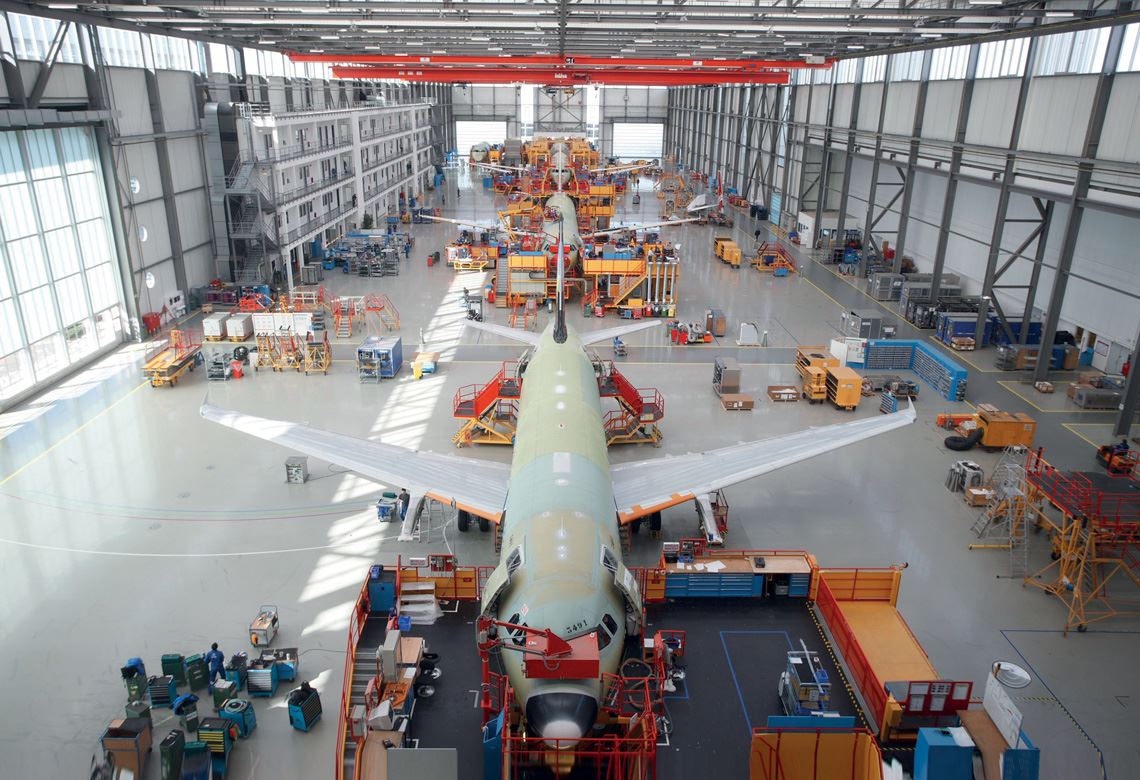 “Turboprops are making a comeback because they are more economical and generate less CO2 [carbon dioxide] emissions,” says Affonso. “But current models are cramped and uncomfortable. Our proposition is to combine the advantages of turboprops [sustainability and fuel savings] with added space and less noise and vibration.”

“There’s definitely a market to be explored, as the regional turboprop Dash 8 [built by Canadian planemaker De Havilland] is nearing the end of production and ATR’s program is more than 30 years old. Embraer’s program has a good shot at success,” says Richard Aboulafia, an aviation industry analyst and vice president of aerospace and defense consultancy Teal Group.

Marcos José Barbieri Ferreira, an economist and aerospace expert at the University of Campinas School of Applied Science (FCA-UNICAMP), believes a turboprop would allow Embraer to claim the 70-to-100-seater market for its own. “European aircraft manufacturer Airbus only makes planes for more than 100 passengers. And Embraer has more than the required expertise to design and develop turboprops.”

Another study, launched under a memorandum of understanding with the Brazilian Air Force, could lead to the development of a new light military transport aircraft. Dubbed STOUT (Short Take Off Utility Transport), the new tactical transport will be designed for short, narrow, and unpaved runways such as those in the Amazon. With a high-wing design, a rear loading ramp, and capacity for 30 soldiers, the utility aircraft will replace the Brazilian Air Force’s older C-95 Bandeirante and C-97 Brasília.

Among the STOUT concept’s new features is hybrid propulsion, with a combination of turboprop and electric engines. “The study [to develop the aircraft] will also seek to explore new technologies to provide solutions to the Air Force’s extreme demands, such as different system architectures, innovative platform solutions, and hybrid-electric propulsion, among others,” Embraer stated in a press release.

“The new study is good news. It’s a project at the frontier, the future of aviation,” says Ferreira. Like the regional turboprop, the STOUT program is still at an initial stage and will take at least four years to complete following approval by the Board of Directors. 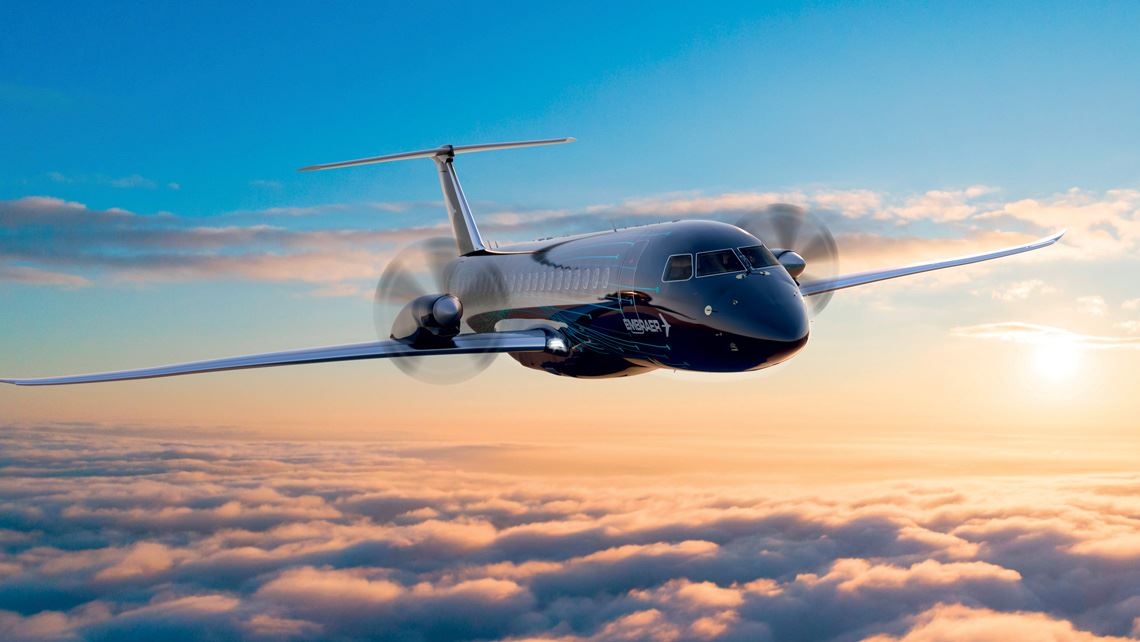 Embraer’s new strategic plan predicts the company will only resume growth next year. “2020 was a year of survival, with Embraer having to buckle up and make tough decisions; 2021 will be a year of stabilization. We should see renewed growth in 2022,” predicts Affonso. The aircraft maker hopes to reach pre-pandemic revenue levels in 2023, and exceed them in either 2024 or 2025.

For this to materialize, Embraer is banking on its highly successful portfolio of modern aircraft. In its flagship commercial aviation division, securing new orders is the immediate goal, with talks currently underway with several airlines, including German Lufthansa. When the pandemic recedes, the aviation market will be particularly favorable for smaller aircraft.

“COVID-19 is reshaping aviation demand. We are likely to see more direct, nonstop flights between medium-sized cities. This will allow people to spend less time in airport lounges. Smaller aircraft are ideally suited for these types of flights,” explains aerospace engineer Jorge Eduardo Leal Medeiros, a professor in the Department of Transportation Engineering at the University of São Paulo’s Polytechnic School (POLI-USP).

In the defense division, Embraer hopes to secure additional orders for its C-390 Millennium multi-mission airlift aircraft, after recently signing a contract for two units with the Hungarian government. Hungary is the second European nation to select the C-390 Millennium, alongside Portugal (five units) and the Brazilian Air Force (28 aircraft), the program’s development partner. The aircraft is the largest plane ever made in Brazil (see Pesquisa FAPESP issue no. 225).

Embraer’s executive aviation division has also performed well, setting a revenue record last year and accounting for 29% of the company’s net revenue. The commercial aviation division had a similar share of net revenue (30%), down from 50% before the crisis. The company’s executive jet portfolio includes four different models, with the Phenom 300 becoming the world’s best-selling light jet for the ninth consecutive year in 2020, according to the General Aviation Manufacturers Association (GAMA).

Aviation industry analysts interviewed by Pesquisa FAPESP agree that Embraer is traversing one of the most delicate chapters of its history post-privatization in 1994, but believe the company has the resilience to weather the turbulence and resume growth.

“Embraer’s financial results have been neither better nor worse than those of its rivals. It’s been a bad year across the board,” says Aboulafia. Airbus, the current industry leader, reported losses of R$7.4 billion last year, while Boeing, beset by problems in its grounded 737 MAX program, sustained even higher losses at R$65 billion.

In addition to the challenge of reorganizing itself as an independent company, Embraer needs to work aggressively to close the gap to its competitors, especially Airbus, in terms of supply chain cost-effectiveness. “But Embraer has always thrived on its own and will continue to do so.” Company executives have said they no longer intend to dispose of or create any joint ventures involving any business units.

The analyst’s reference to Airbus as a competitor is explained by the European company’s recent entry into the up to 150-seat segment, a niche market dominated by the Brazilian aircraft maker. In 2017 Airbus acquired the CSeries commercial jet program from Canadian Bombardier, then Embraer’s biggest rival. The program’s two models have been renamed as the A220 family. The smallest (A220-100) seats up to 135 passengers and is a competitor to Embraer’s largest jets, the E190-E2 and E195-E2, with seating capacities of respectively 114 and 146 passengers. In 2020 Airbus delivered 38 units and received 64 new orders for its A220 family, which also includes the A220-300, a 160-seater.

“Embraer missed a good opportunity when its partnership with Boeing was undone. The competitive landscape has now become more challenging,” says Leal Medeiros. “Airbus offers a broader product range, has greater bargaining power, and will be a tougher rival than Bombardier was in the past.”

Aerospace engineer Graham Warwick, executive editor at Aviation Week, one of the most respected publications in the aviation sector, agrees that the outlook for Embraer is challenging, but puts it into perspective. “Embraer doesn’t need a backlog the size of Airbus’s or Boeing’s to survive. All it needs is new orders,” he says. “As the aviation market rebounds, new orders will be placed and some will end up going to Embraer, enough for it to survive or even grow.”