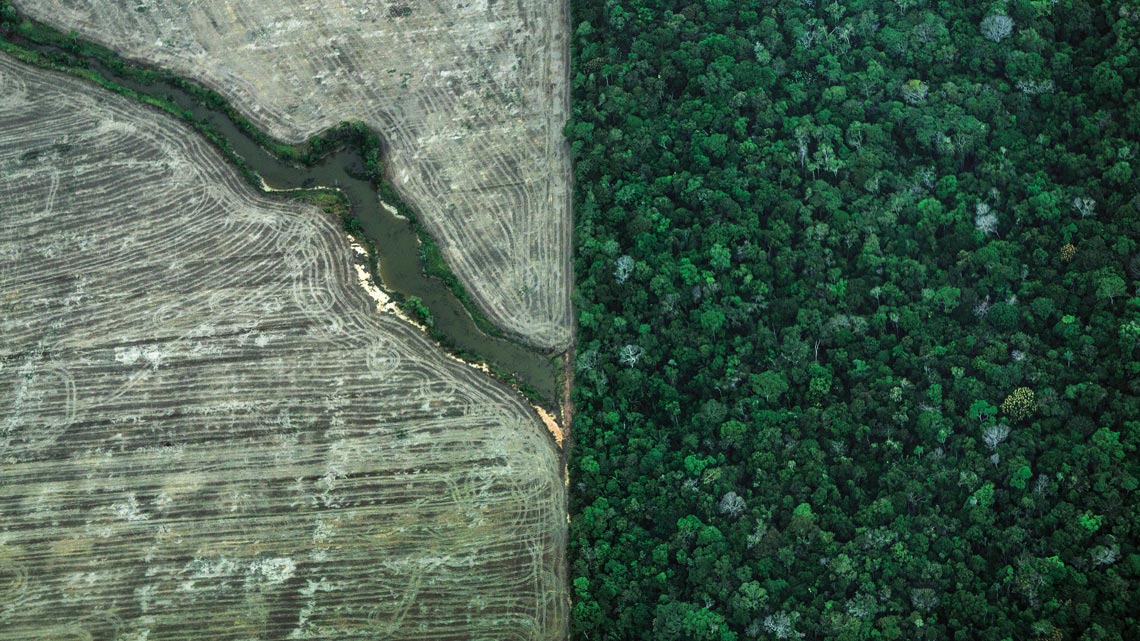 Preserved stretch of rainforest in Mato Grosso, alongside an area cleared for soybean production

The climate in the Amazon—the world’s largest rainforest—is changing. Roughly half of Brazil is covered by rainforest, where annual precipitation is at least 2,000 millimeters (mm) per year and the average temperature is 27 ºC. With roughly 20% of its original area now deforested, many areas are now showing signs of becoming warmer and drier. The effects are most strongly felt in and around the deforested areas, which are highly concentrated in—although not restricted to—the southwest, south, and east borders. Northwestern Amazonia, naturally wetter and better preserved, likely because it is more difficult to access, has remained relatively undisturbed by natural pressures and human activity.

If these trends continue or worsen over the coming decades, these two regions of the Amazon could become significantly more distinct and contrasting by the middle of this century. A classic rainforest with dense tropical vegetation would stretch from west of Manaus through neighboring countries until reaching the Andes. The second Amazon, meanwhile, which would begin east and south of the Amazonian capital and would cover much of Brazil, would represent the materialization of the fears held by most climate and ecology scholars: fragmented and partly transformed into a savanna with long droughts, former rainforest areas would be taken over by sparse Cerrado vegetation and farmland.

Read more:
– The rainforest
– Paulo Moutinho: Standing in the forest
– Growth without destruction
– Lauro Barata: The network of natural wealth

“The western side of the Amazon is what the east was like in the past,” says chemist Luciana Vanni Gatti of the Greenhouse Gases Laboratory at the Brazilian National Institute for Space Research (INPE). “What we don’t want is for the east to be the future of the entire region.” Gatti is one of the leaders of an international project that for the last 10 years has been studying what is known as the carbon balance of the Amazon rainforest: the difference between the amount of carbon emitted and the amount absorbed by vegetation in the region. One of the major current scientific debates is whether the Amazon remains a carbon sink, a role that the rainforest has always played in recent decades, or whether it has now become a carbon source. In the former scenario, trees in the forest continue to grow, and through photosynthesis, they remove more carbon dioxide (CO2)—the main gas associated with the greenhouse effect—than they emit through respiration. They thus help to mitigate global warming. But in the latter, the region releases more carbon into the atmosphere than it absorbs.

This possible role reversal is caused by the increase in tree mortality, which could be associated with major droughts in the region over the last 20 years. In this scenario, dead trees emit CO2 and methane into the atmosphere. The biomass of the Amazon’s vegetation and soil has an estimated carbon stock equivalent to ten years of carbon dioxide emissions from around the planet—roughly 400 gigatons of carbon dioxide. Gatti’s research, including a study published in the journal Nature in 2014, suggests that in extremely dry years, such as 2010 and 2015, the Amazon no longer functions as a carbon sink. “Current research also indicates that eastern Amazonia is becoming a carbon source. Most years, the western region removes enough carbon to offset the output from the east. But this balance could be tipped.”

The area under most pressure is the eastern and southern Amazon, but the data is concerning for the entire region. Records from three independent international climate centers—NASA’s Goddard Institute for Space Studies, the US National Climatic Data Center (NCDC), and the UK’s Met Office Hadley Centre for Climate Science and Services—indicate that in the last 40 years, the average temperature in the Amazon has risen by 0.7 °C. Most of the increase has occurred in the last two decades, with 2016 being the hottest year in the region, according to a review article published by Brazilian and European researchers in the scientific journal Frontiers in Earth Sciences in December last year. “The last three major droughts in the region, in 2005, 2010, and 2015/16, were classified as extreme events that historically occur every 100 years,” comments the lead author of the paper, climatologist José Marengo, head of the Research and Development department at the Brazilian Center for Natural Disaster Monitoring (CEMADEN). “The climate in the Amazon is becoming more unpredictable. Over the last 10 years, we have also had three megafloods, in 2009, 2012, and 2014.”

Variations in precipitation rates in the northern Amazon over recent decades are more nuanced than the temperature changes. In this regard, the dichotomy of east vs. west is even more stark. Recent studies indicate that total rainfall in the Amazon as a whole has not changed significantly over the last four decades, or that it has only declined very slightly. But breaking the analyses down by subregion and period of the year reveals a number of trends. 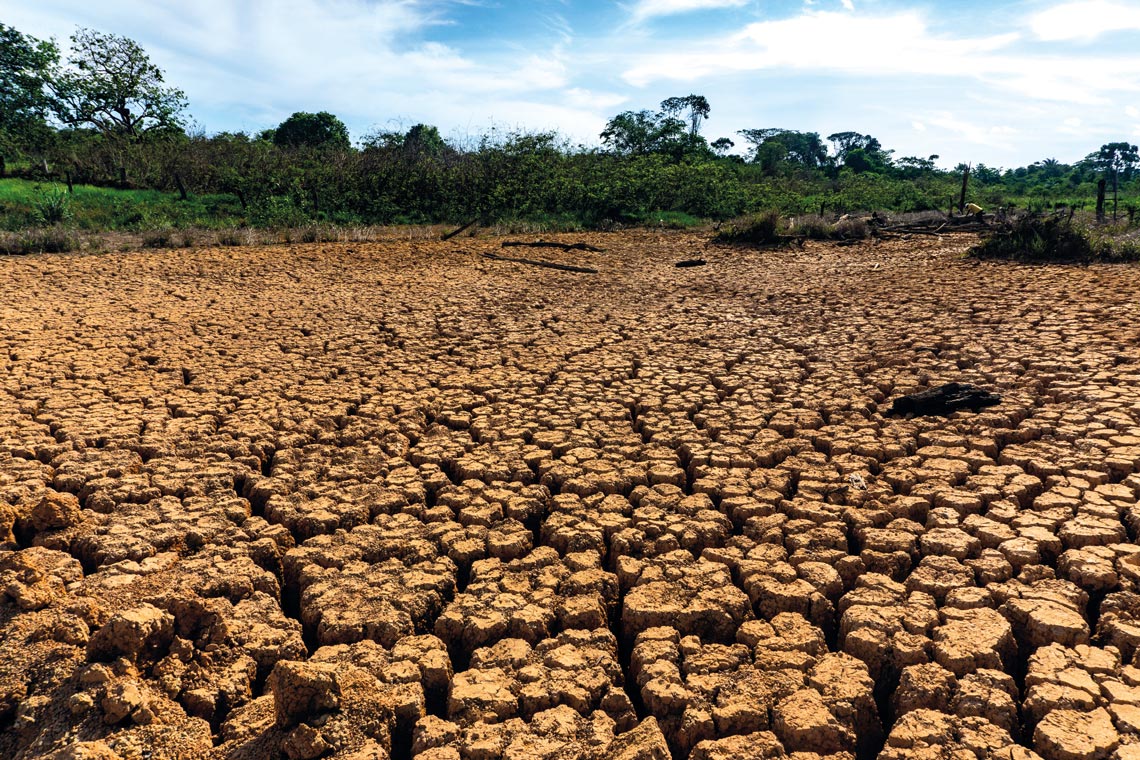 Dried up spring in the Xingu basin, near the Xingu Indigenous ParkRogerio Assis

The evidence shows that the southeast, where the so-called arc of deforestation, which accounts for 75% of all deforestation in the Amazon, is located, suffers from more prolonged droughts during the dry season. The northwest, meanwhile, appears to be experiencing the opposite phenomenon, with greater rainfall during the wet season. Between 1981 and 2017, rainfall in southeast Amazonia between September and November fell by 18%. In the northwest, rainfall between March and May increased by 17%. The findings were published by climatologist Jhan Carlos Espinoza of the Geophysics Institute of Peru in the scientific journal Climate Dynamics in September 2018. The study used data from two rainfall monitoring centers in the Amazon: CHIRPS, which is run by the University of California, Santa Barbara, and HOP.

The increased number of days with little to no rain during the dry season is potentially one the most disruptive events with respect to the climate and vegetation in the Amazon. “If the dry season extends to four months, we will reach a point of no return for the rainforest,” says climatologist Carlos Nobre, from the Institute of Advanced Studies at the University of São Paulo (IEA-USP). “The Cerrado regularly goes more than four months without rain. Such a long drought would not support a rainforest like the Amazon.” In this scenario, the severe water scarcity could lead to the so-called savannization of the rainforest. This process would see the dense and closed forest typical of very wet climates replaced by vegetation similar to the Cerrado, which is formed of shrubby plants and few trees, characteristic of drier environments. Rainforests have more impact on the climate as they provide more water vapor and draw more carbon from the atmosphere than the Cerrado.

Between 1950 and the mid-1970s, droughts in the south of the Amazon, classified as rainfall of less than 50 mm per month, began in late May or early June and ended in the last few days of August. Over the past four decades, the drought period has increased by 15 to 30 days, lasting until almost October, as shown in the paper written by Marengo. In an editorial published in the journal Science Advances on February 21, 2018, Nobre and American biologist Thomas Lovejoy, from George Mason University, USA, wrote that if 20–25% of the Amazon is cleared, the rainforest will reach a point of no return. Previous studies put this turning point at a deforestation threshold of between 20% and 40%.

The type of vegetation that grows in any biome is affected by variations in temperature and especially precipitation. There are almost no plants, for example, in deserts, due to the extreme scarcity of water. This relationship also exists in the Amazon, but as part of a feedback mechanism where the huge tropical forest helps maintain the extremely wet climate of the northern region. This is because the Amazon processes at least half of its rainfall in its own water cycle. Water vapor from the Atlantic is captured and processed by the trees in the forest, and then redistributed regionally or carried to the central south of the continent. “Each tree pumps 500 liters of water into the atmosphere every day. This function is only effective if the rainforest cover remains continuous,” comments ecologist Paulo Moutinho, from the nongovernmental organization Amazon Environmental Research Institute (IPAM). Felling trees undermines the synergy between climate and vegetation in the rainforest. More rainfall leads to more trees, and more trees lead to more rainfall.

Theoretically—and paradoxically—the increase in greenhouse gases could have a positive effect on the Amazon, acting as a fertilizer for vegetation. With more CO2 available in the atmosphere, plants would be able to perform more photosynthesis and grow more. Even a mature forest like the Amazon, where much of the vegetation has passed the initial growth stage, could benefit from this atmospheric fertilization. The current CO2 level, at around 410 parts per million (ppm), is a record high. The conditions are ideal for this hypothesis to be tested. This is one of the goals of AmazonFACE, a project involving Brazilian and foreign scientists who plan to spray high concentrations of CO2 in stretches of intact forest to study the consequences.

Preliminary research has been conducted around two instrumentation towers. Early results, obtained from computer modeling and field data (with no carbon dioxide enrichment), indicate that atmospheric fertilization could be limited. “The low levels of phosphorus in Amazonian soil seems to restrict the trees’ ability to absorb extra carbon from the atmosphere by about 50%,” says ecologist David Lapola of the State University of Campinas (UNICAMP), one of the authors of a paper based on these early results published in the journal Nature Geoscience in August. It is not yet known whether global warming could have a positive impact on certain plant species via CO2 fertilization.