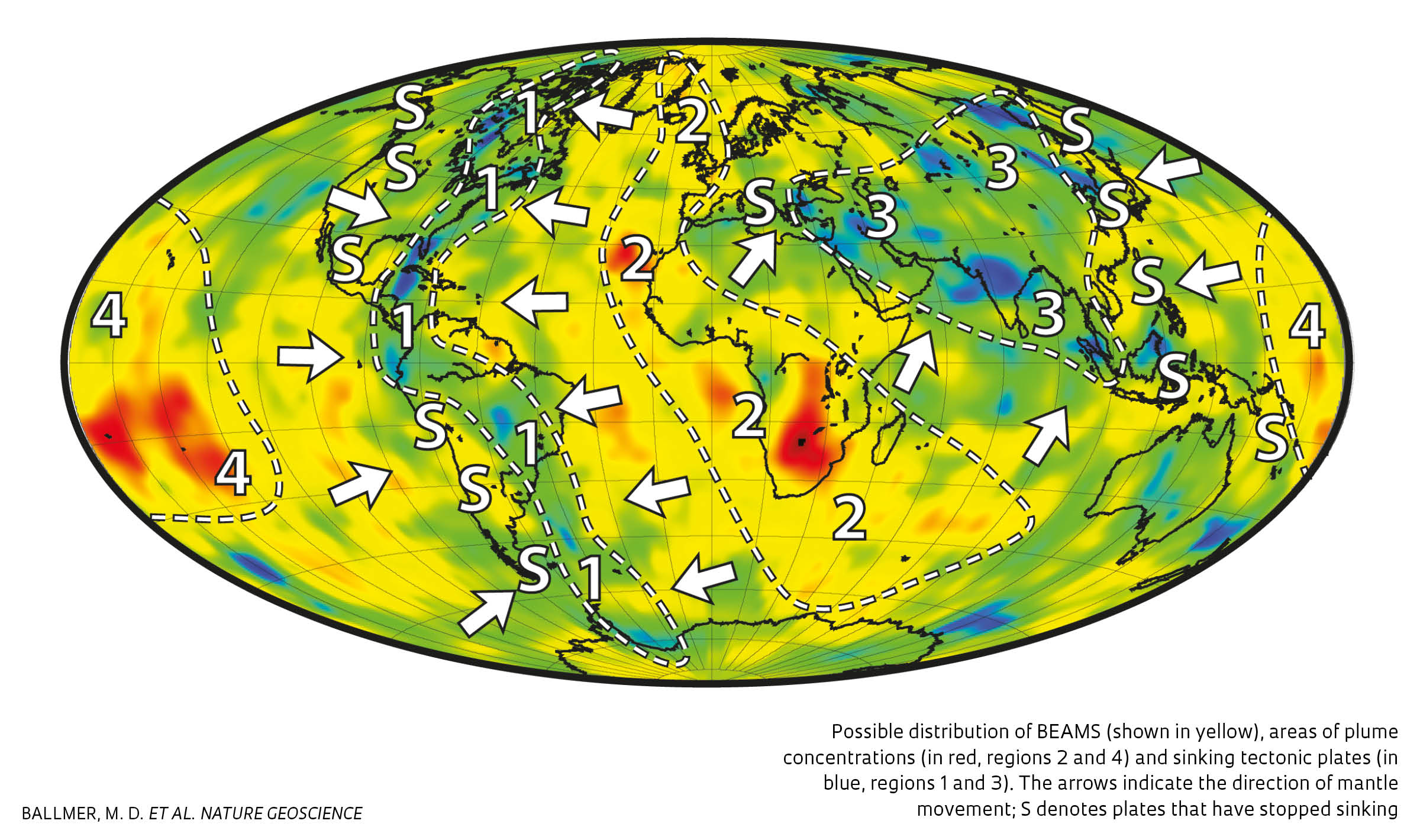 The Earth’s interior is believed to contain immense blocks of rock. Because these rocks are denser and more rigid than the material around them, they likely stabilize the movements of the mantle, i.e., the layer between the Earth’s surface and core, which comprises approximately 80% of the planet’s volume. Known as bridgmanite-enriched ancient mantle structures, or BEAMS, these blocks are thought to span thousands of kilometers (km), lie at least 1,000 km deep and float on the lower mantle, near the boundary of the Earth’s core almost 2,900 km below the surface.

A team of researchers from the Tokyo Institute of Technology and the Swiss Federal Institute of Technology Zurich (ETH Zürich), along with Brazilian physicist Renata Wentzcovitch of Columbia University in the United States, proposed this new hypothesis about the composition and mechanics of the lower mantle in a study published in Nature Geoscience on February 27, 2017. Although not considered complete, this hypothesis explains a number of phenomena, such as the upwelling of less dense rocky material from the mantle to the surface and the sinking trajectory of the edges of tectonic plates formed by the crust and upper mantle in the planet’s interior. Both of these phenomena might occur in the less viscous regions between BEAMS.

The above mentioned researchers developed this hypothesis based on two pieces of evidence about the composition of the mantle. The first piece was obtained indirectly with tomographic models, which indicate the consistency of the planet’s interior based on changes in the velocity of seismic waves. These waves, which are generated by earthquakes, pass through the interior of the planet at velocities that depend on the density and temperature of the material they traverse.

The second piece of evidence was obtained directly in the form of primitive meteorites called chondrites, which are rich in magnesium and silicon. Although these rocks came from space, they are likely the same material that formed the Earth’s interior 4.5 billion years ago. The composition of this type of meteorite indicates that the lower mantle may be compositionally different from the next closest layer to the surface, i.e., the upper mantle. The outermost layer of the mantle begins immediately below the Earth’s crust and extends 660 km downward, with rocks at temperatures that increase with depth and reach up to approximately 1,600 degrees Celsius (ºC) at the boundary with the lower mantle. In the lower mantle, the rocks are denser and the temperature ranges from 1,600ºC to 3,700ºC at the boundary with the core.

The researchers confirmed that these indicators of the composition of the Earth’s interior were not consistent with a hypothesis established in the 1960s; according to this hypothesis, the upper and lower mantles have the same composition. “The ratio between the amounts of magnesium and silicon in the Earth is likely the same as that of the Sun, because the two were formed from the same nebula,” Wentzcovitch hypothesized. “The upper mantle contains 25% more magnesium than silicon, in the form of magnesium silicate (Mg2SiO3). If that ratio held true in the lower mantle, there would be less silicon on Earth than expected, based on the composition of the Sun or of chondrites.”

In the study, the researchers assumed that the lower mantle has more silicon than the upper mantle, increased the proportion of this element and performed two-dimensional numerical computer simulations of the possible movements of that deep planetary layer. The simulations indicated that much of the mantle formed soon after the birth of the planet might remain to this day in the form of a mineral known as perovskite or bridgmanite (MgSiO3), without mixing with the adjacent region formed by rocks with a 20 to 30 times lower viscosity. Consequently, the more viscous material, i.e., the BEAMS, could be vestiges of the planet’s earliest existence. “Our simulations indicated that these rigid blocks did not become more liquid as the Earth evolved,” explained Wentzcovitch, who has studied the possible processes involved in the formation and transformations of bridgmanite in the planet’s interior (see Pesquisa FAPESP Issue No. 198). “The silicon that appears to be missing must be hidden in the lower mantle.”

Chondritic meteorites such as this, which was found in northwestern Africa, help scientists better understand the composition of the Earth’s lower mantleH. Raab / Wikimedia Commons

“We don’t know how many BEAMS there are, but there probably aren’t more than three or four,” she noted. “Our next project will be to define them accurately, through a detailed analysis of the changes in velocity of seismic waves.” Proving the existence of BEAMS is a very difficult task. In April 2017, an international group of scientists announced their plans to be the first to penetrate the mantle, probably in 2030, using the vessel Chikyu to drill to 11 km below the surface; this depth is still far above the 2,000 km level where silicon-rich blocks can be found.

The current hypothesis assumes that tectonic plates likely sink in the less viscous region between the BEAMS and extend down to the bottom of the mantle. The intriguing previously identified fact that some plates stopped at a depth of approximately 1,000 km might be explained by the possibility that they encountered a BEAM, which hindered subduction. Conversely, the material in the deep mantle could also rise to the surface through the regions between the rocky blocks.

This study also indicates that the BEAMS may determine the origin and trajectory of plumes, which are jets of hot, low-density rock, 100 to 200 km in diameter, that flow from the mantle-core boundary and rise to the surface, creating volcanic regions such as the archipelagos of Fernando de Noronha, Hawaii and the Galápagos. On the basis of this hypothesis, the researchers produced a map showing the possible distribution of BEAMS and plume-rich regions concentrated in southern Africa and the central Pacific Ocean.

An international team of scientists plans to use this vessel, the Chikyu, to drill into the Earth’s crust to reach the mantle in 2030JAMSTEC

Limitations and interactions
In a comment published in the same issue of Nature Geoscience, geophysicist Frédéric Deschamps, a researcher at the Institute of Earth Sciences, Sinica Academy, Taiwan, noted that the BEAMS hypothesis may explain the movement of tectonic plates in mantle regions with lower viscosities and the locations of volcanic regions over the plumes. Nevertheless, he said that the two-dimensional model cannot fully describe the spatial heterogeneity of seismic wave velocity measurements at depths greater than 2,500 km. To better understand this situation, he suggests that “three-dimensional simulations would be needed.”

“The simulation presented in Nature Geoscience is one step further in our understanding of the lower mantle,” commented geophysicist Eder Molina, a professor at the Institute of Astronomy, Geophysics and Atmospheric Sciences at the University of São Paulo (IAG-USP). “The fact that modeling does not explain some tomography records may be due to the limitations of its having been done in two dimensions rather than three, but it could also be a consequence of an error in the model or problems with seismic wave detection, which is not an infallible method.”

Physicist João Francisco Justo Filho, a professor at the USP Polytechnic School who has worked with Wentzcovitch since 2007 but was not involved in the research published in Nature Geoscience, observed, “The proposed geodynamic model is the simplest possible one for producing plausible results. There are, however, other chemical elements, such as iron, hydrogen and oxygen, that can change the viscosity of the mantle rocks, even in small proportions.” In a study published in 2013 in Physical Review Letters, Wentzcovitch, Justo and Zhongquing Wu of the University of Minnesota showed that increased pressure in the deepest layers of the Earth could alter the magnetism of iron, increase the viscosity of rocks containing bridgmanite and ferropericlase, another mineral, and promote the formation of BEAMS.