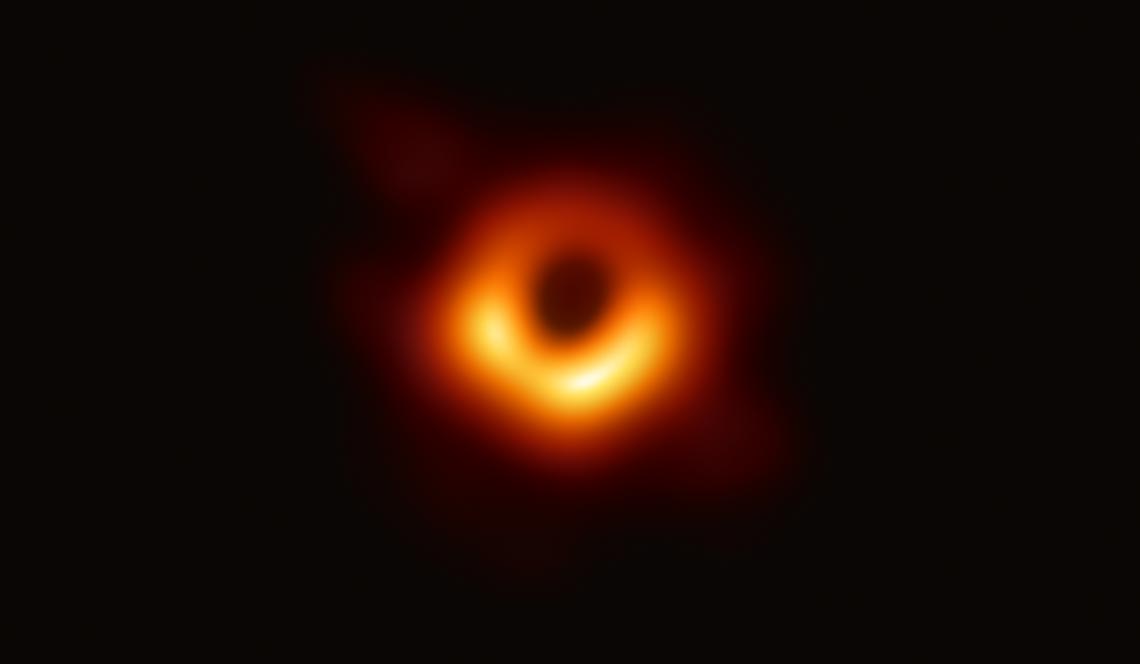 Image of the black hole at the center of galaxy M87, reconstructed from microwave signals picked up by radio telescopes

Pōwehi. The expression loosely translates as “an embellished dark source of unending creation,” and comes from the Kumulipo, an eighteenth-century Hawaiian chant about the origin of the world. Pōwehi is the name chosen by Larry Kimura, a professor of native languages at the University of Hawaii, USA, for the black hole recently made famous as the first to ever be captured in an image.

Presented at a press conference on April 10, the picture reveals a slightly blurred orange ring around a black central circle. It was generated from the first observations of visible light surrounding a black hole—in this case, the black hole at the center of the Messier 87 (M87) galaxy, located in the constellation Virgo. The name Pōwehi still needs to be submitted for approval by the International Astronomical Union before it can be formally adopted.

The dark circle inside the ring of light at the center of M87 is the shadow cast by the event horizon, a region where gravity is so massive that nothing can escape its pull—all matter and energy that crosses the event horizon ends up compressed into a single point, known to physicists as a singularity. The ring, represented by colors ranging from light yellow to red, is the innermost portion of a disk of ultra-hot gases that spin around the black hole before crossing the event horizon and disappearing. The black hole can only be seen because of the shadow its event horizon casts over these glowing gases.

The image is the most direct evidence of a black hole ever captured. It is the result of a joint effort by more than 200 researchers from the Event Horizon Telescope (EHT) project, an international consortium that used data from eight radio astronomy observatories located around the planet, programmed to function together like a huge, Earth-sized radio telescope. 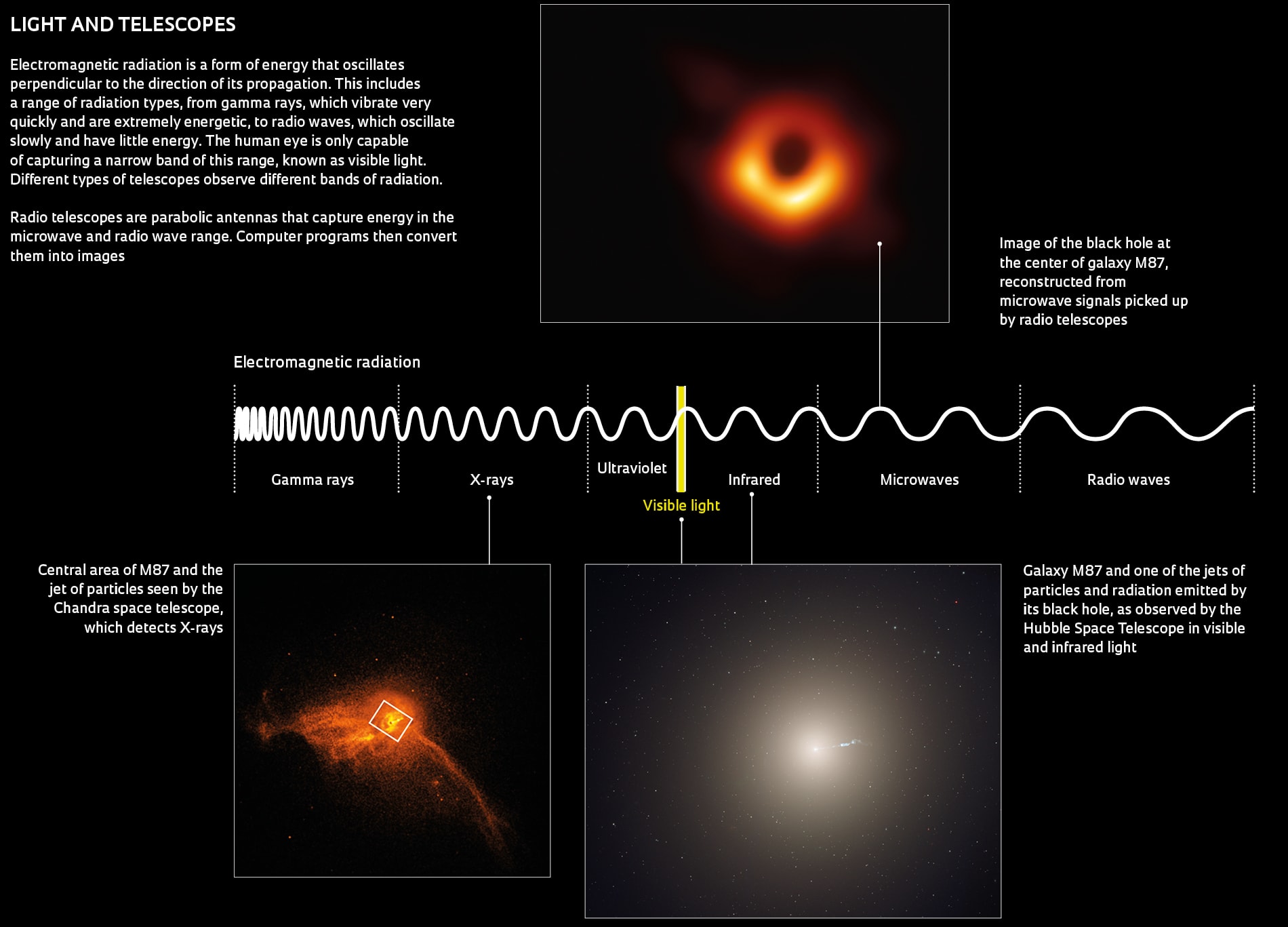 “We have seen what we thought was unseeable,” said American astronomer and EHT project director Sheperd Doeleman when presenting the image at a press conference in Washington, USA. “We have achieved something presumed to be impossible just a generation ago,” said Doeleman, who is a researcher at the Harvard-Smithsonian Center for Astrophysics in Massachusetts.

Black holes are one of the most mysterious objects in the Universe. Their existence was first theorized in 1916, after German physicist and astronomer Karl Schwarzschild (1873–1916) published a solution, calculated between battles against Russia during the First World War, to Albert Einstein’s (1879–1955) equations of general relativity. Schwarzschild’s solution defined the distance from which a body of extremely high mass would attract everything around it. The higher the mass concentrated in the singularity, the greater the distance, known as the Schwarzschild radius, becomes. It can be used to determine the event horizon of a black hole. Einstein and other physicists of the time were fascinated by the results, but believed it unlikely to occur in nature. It was not until half a century later, with the publication of theoretical studies on massive rotating bodies and the observation of celestial objects that could potentially be black holes, that scientists began to seriously consider the possibility that these objects may exist.

“Since the 1960s and 1970s, there has been indirect evidence of the existence of these objects,” says astrophysicist Daniel Dutra, from the Federal University of Santa Catarina (UFSC). “Having an image of the event horizon, however, gives us a confidence that would be difficult to achieve with indirect evidence alone, no matter how much of it we had.”

Although the black hole in M87 has an extremely high mass, about 6.5 billion times greater than that of the Sun, it is difficult to observe the brightness of the gas around it. The black hole is so far away (roughly 55 million light-years from our planet) and the shadow of its event horizon is so small from our perspective (as seen from Earth, it is comparable to the size of an orange on the surface of the Moon) that we have only recently developed the capability to see it. The new technique adopted by the EHT team involved using eight radio telescopes together, with advanced algorithms treating the data and reconstructing the image.

Based on the calculations of general relativity, astronomers theorized that if a black hole was located in a bright region, such as within a glowing gas disk, we would be able to see a shadow of a certain shape and size. But no telescope with a high enough resolution to do so had ever existed before.

The observations that enabled the scientists to generate this famous image were made in April 2017 and generated roughly 5 petabytes of data (5,000 terabytes—the equivalent of around 5,000 years of digital music), which was stored on hundreds of hard disk drives and transported physically to two analysis centers by airplane. The teams working at these centers spent two years correlating the data from the different telescopes and making any necessary corrections. The data interpretation and analysis methods were presented in six scientific articles published in a special issue of The Astrophysical Journal Letters in April.

“The image obtained by the EHT team represents the limit of our knowledge,” says theoretical physicist Bruno Carneiro da Cunha, from the Federal University of Pernambuco (UFPE).

Although the picture is not in perfect focus, it is still considered a major scientific achievement for two reasons. The first is that it allows us to more accurately estimate the characteristics of the black hole in M87—previous estimates, for example, put its mass at 3.5 billion times greater than the Sun. The second—and most important—is that it confirms another aspect of the theory of general relativity, enabling scientists to accurately describe even the most extreme phenomena of the Universe. The first proof of Einstein’s theory was the observation of light curving as it passed the Sun 100 years ago, detected during the 1919 eclipse. 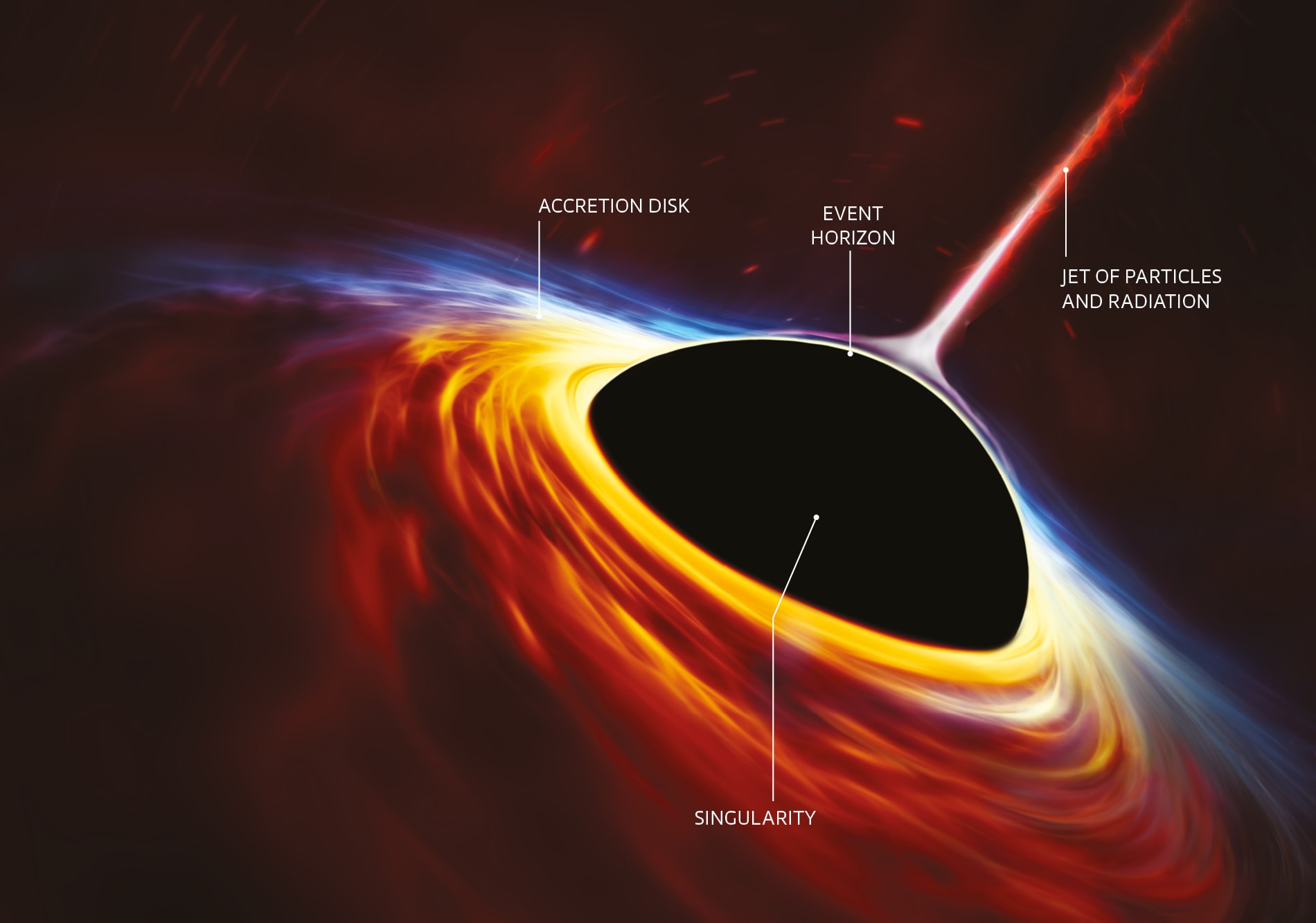 Black holes are extremely dense celestial bodies. They contain a huge mass (millions to billions of times greater than the mass of our Sun) in an infinitely small space called a singularity. As a result, they distort space-time and attract everything within their reach. They are fed by a superhot gas disk known as the accretion disk, which is pulled in by gravity and spirals around the event horizon, the boundary beyond which nothing can escape. As it rotates, the black hole drags the disk and distorts its magnetic fields, creating jets of particles and radiation.

“The observation of an event horizon of this size using calculations from the theory of general relativity will dramatically reduce the time and money spent studying alternative gravitational theories,” says theoretical astrophysicist Rodrigo Nemmen, from the University of São Paulo (USP).

“The shadow at the center of M87 is considered the most direct evidence of the existence of black holes, although it is not the only evidence,” explains physicist George Matsas, from the Institute of Theoretical Physics at São Paulo State University (IFT-UNESP). In September 2015, the Laser Interferometer Gravitational-Wave Observatory (LIGO) in the USA gathered further indirect evidence when it detected gravitational waves generated by two black holes colliding.

Avery Broderick, a researcher at the Perimeter Institute and the University of Waterloo, both in Canada, noted during the press conference in Washington that the theory of general relativity explicitly describes the components of black holes. Data obtained by LIGO and the EHT, he says, suggests that small and large black holes are similar in nature and likely behave in the same way.

According to Brazilian astrophysicist Lia Medeiros, a member of the EHT collaboration and currently a researcher at the University of Arizona, USA, the results will help us to better understand the geometry and behavior of the disk of matter that feeds black holes. “There is still a lot than needs to be understood. For example: how are the jets emitted by some black holes, such as the one in M87, created?” she says.

The EHT researchers expect to able to obtain sharper images of the black hole in galaxy M87 over the coming years. Three other radio telescopes will soon join the network, increasing its potential resolution by about 30%. But a picture of another black hole may come first. Known as Sagittarius A*, the black hole at the center of our galaxy (the Milky Way) has a mass 4.1 million times greater than the Sun and is situated 2,000 times closer to Earth than the black hole in M87. According to Doeleman, these images are more complex and the EHT team is still working on them.