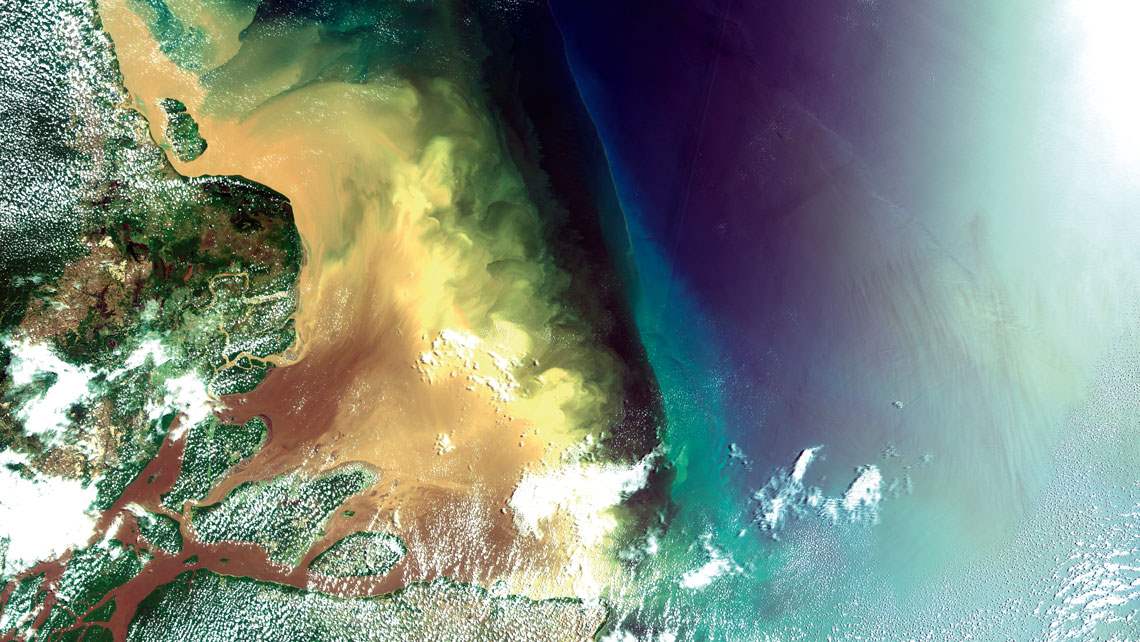 The Amazon River, the longest and most voluminous in the world, constantly pours colossal amounts of fresh water and sediment into the western Atlantic Ocean. Three hundred million liters enter the ocean every second near Marajó Island in Pará, equivalent to almost 20% of the water contributed to the sea by all the rivers on Earth. This torrent of water flows from the Andes to the Atlantic over the course of a month, carrying suspended particles equivalent to the mass of Sugar Loaf Mountain in Rio de Janeiro. Enriched with sediment and nutrients dragged along the river’s 7,000-kilometer (km) course, the water is not diluted immediately upon reaching the ocean. Instead, it forms an extensive plume of dark water almost 30 meters (m) deep that flows over the salt water for almost 200 km out to sea. Propelled by winds and underwater currents, the plume extends 2,300 km northwest and has its own fauna not found in other regions of the ocean.

This large body of nutrient-rich freshwater acts as a fluid, porous barrier. It separates several marine species found in the Caribbean from those that live south of the Amazon River mouth, but allows others to pass through. Its role as a barrier was first noticed in the early 1970s by scientists outside Brazil. Now, two studies led by Brazilian biologists have described the plume’s evolving influence on the formation and distribution of fish and other marine animals in the Western Atlantic.

“The Amazon plume performs a similar function in the ocean as the river itself does in the interior of the continent, separating species or populations of the same species on opposite banks,” explains Brazilian biologist Luiz Rocha, curator of ichthyology at the California Academy of Sciences, USA. Rocha has been studying the plume’s influence on the diversification and distribution of reef fish for over 20 years and is coauthor of an article set to be published in the Journal of Biogeography. In the paper, he and his colleagues from the Federal University of Rio de Janeiro (UFRJ), Federal University of Santa Catarina (UFSC), and Charles Darwin University, Australia, show that the plume’s impact has progressively increased over the course of the river’s evolution. In the last 2.4 million years, its ability to isolate populations has grown so much that it now affects large fish and has increased the rate at which new species emerge.

The researchers reached this conclusion by comparing the time of separation between species (or populations of the same species) on opposite sides of the barrier with changes in the volume of water and sediment transported by the Amazon. Analysis of debris deposited at the river mouth suggest the plume was first formed between 9.4 million and 9 million years ago. Its arrival in this region of the Atlantic coincides with the uplift of the northern Andes and the emergence of a primitive form of the Amazon River.

In its early stages, which lasted until 5.6 million years ago, the amount of freshwater and sediment discharged into the ocean was small, enough to deposit 5 centimeters (cm) of sediment at the river mouth every millennium. Over the next 3.1 million years, the load increased sixfold, eventually leading to the deposition of 30 cm per millenium. The third and most recent phase of the river’s evolution began around 2.4 million years ago, during which the concentration of suspended material quadrupled and the amount of sediment deposited every thousand years reached 120 cm. “As sedimentation rates increased, the barrier became less permeable to shallow reef fish,” says Rocha. 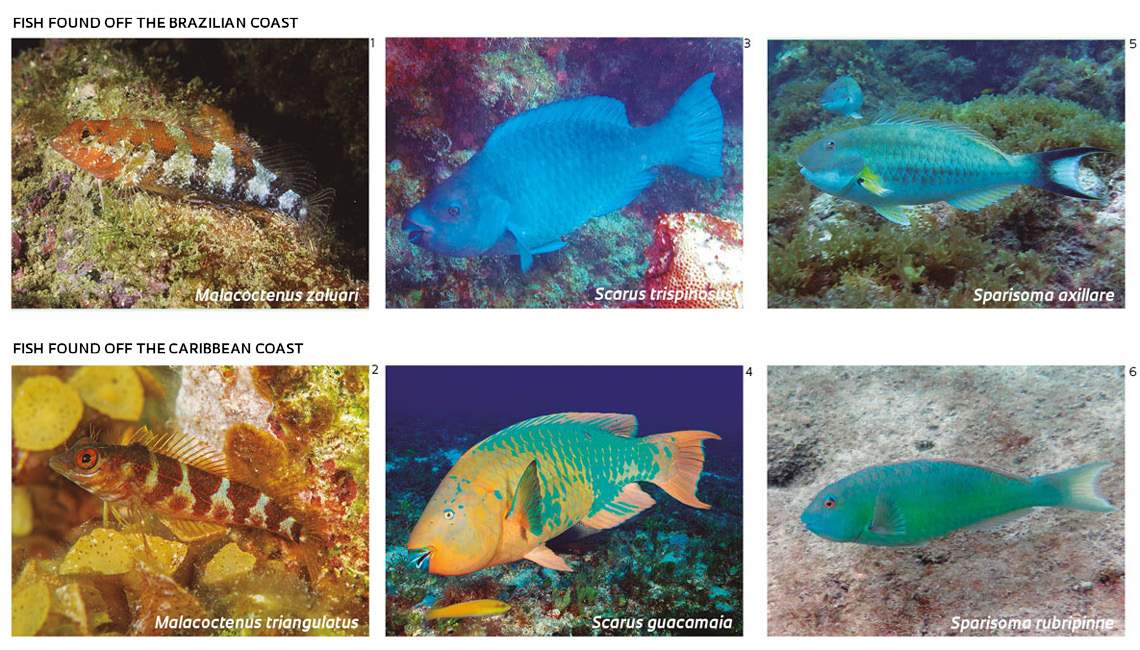 Under the supervision of Fabio Di Dario from UFRJ and Sergio Floeter from UFSC, PhD student Gabriel Araujo analyzed 21 regions of the genomes of almost 150 reef fish species found along the Brazilian coastline and in the Caribbean Sea to establish the separation time between them. The fish had a wide range of sizes and characteristics, from Malacoctenus zaluari, a 10-cm-long silver fish with orange dorsal stripes and black spots that never strays far from where it is born, to the Atlantic goliath grouper (Epinephelus itajara), which is 2.5 m long and has a greenish body covered with dark spots.

The species were then allocated into 110 pairs. Each pair comprised one species found in the Caribbean and another found off the Brazilian coast or represented two different populations of the same species separated by the plume. The dividing effect of the muddy freshwater torrent was observable in 60 of these pairs, which were affected during one of three moments during the Amazon’s evolution. There was no impact on the other 50, which occur across this entire stretch of the Western Atlantic.

The plume had a proportionally greater influence on cryptobenthic species—fish less than 10 cm long that live near the seabed and hide in the reef, such as the genus Malacoctenus—than on larger fish. Of the 23 cryptobenthic species currently found in this region of the Atlantic, 20 (87%) likely emerged due to the influence of the plume, which divided unique populations of the same ancestral species. The same phenomenon was observed in 46% of the 87 larger species, including the rainbow parrotfish (Scarus guacamaia), a 1.2-m-long Caribbean fish with a green body, orange fins, and blue mouth, and the greenback parrotfish (Scarus trispinosus), a 90 cm fish whose color is more uniform found off the Brazilian coast.

“The smaller species were the first to be separated by the plume. This effect only becomes evident in larger species in the last 2.4 million years,” says Floeter, from UFSC. The freshwater torrent separating the surface waters of the Caribbean from those of the Brazilian coastline led to the emergence of 16 cryptobenthic species in the first 4 million years of its existence. These fish are highly unlikely to cross the barrier because they generally travel short distances and their larvae only live in the water column for a short time.

While the plume initially had less of an impact on larger fish, the effects intensified over time as the amount of sediment and water turbidity increased. Of the 31 separation events recorded in the last 2.5 million years, 13 involved species larger than 50 cm. One of the most recent occurred just 100,000 years ago, giving rise to the stoplight parrotfish (Sparisoma viride), found in the Caribbean, and the reef parrotfish (Sparisoma amplum), found off the coast of Brazil.

Changes in the plume’s chemical and physical properties during the Pleistocene were accompanied by more frequent oscillations in sea level, which fell to more than 50 m below the current level in at least three periods. Because of the limited diameter of the plume, it has less of an effect on the movement of species between the Brazilian coast and the Caribbean during periods when the planet is warmer and the sea level is high, like now. Some of these fish use the enormous reef of calcareous algae, coral, and sponges outside the Amazon River mouth—which extends from Pará to French Guiana—as a corridor between the Brazilian coast and the Caribbean. In the ice ages, when the sea level was lower, the freshwater plume covered much of the continental shelf, preventing reef formation and hindering the movement of marine organisms.

What Rocha and Floeter’s group observed in reef fish appears to be true for a wide variety of sea life. In a study published in the journal Scientific Reports in January, biologist Everton Tosetto and researchers from the federal universities of Pernambuco (UFPE), Rural Pernambuco (UFRPE), and Paraíba (UFPB), and the Institute for Research for Development (IRD) in France analyzed the plume’s influence on the distribution of 8,375 species from 17 major animal groups (phyla) found in the Western Atlantic, from the Caribbean Sea to Cabo Frio in Rio de Janeiro.

A wide variety of creatures was studied, including microscopic organisms that form plankton and are passively transported by ocean currents, animals that live on the sea floor, such as anemones and polychaetes, and others that move freely and independently such as crustaceans, fish, and even birds. “Previous research has focused on specific phyla. We showed that the Amazon River plume is a barrier to the dispersion of the main marine animal groups,” says the biologist, who is doing a postdoctoral fellowship at IRD.

The group found that the plume is more than a divider between two areas with distinct faunas. It in itself is an ecosystem with its own unique biological diversity. Its physical (higher turbidity) and chemical (lower salinity and higher nutrient concentration) characteristics favor the growth of a considerable number of species that might not be able to withstand the conditions of seawater.

A comparison of the number of species shared between the three regions also reveals that the coast of Brazil and the plume are fauna “exporters”: 45% of Brazilian species and 65% of species from the plume also live in the Caribbean, while only 25% from the Caribbean are found off the coast of Brazil and 21% in the plume. These data suggest that in many cases, the plume acts as a semipermeable filter that allows organisms to pass in one direction more than the other,” says Tosetto. The preferred direction of dispersion is from south to north, probably as a result of ocean currents, particularly the North Brazil Current.

In a paper published in the journal Science of the Total Environment in March this year, UFRJ oceanologists Fabiano Thompson and Camille Leal and their team analyzed communities of microorganisms—bacteria and archaea—that inhabit two sponge species found between Panama and Rio de Janeiro: Monanchora arbuscula and Xestospongia muta. They concluded that the Amazon plume did not affect the distribution of these sponges or the microorganisms that live inside them, which are important to their health.