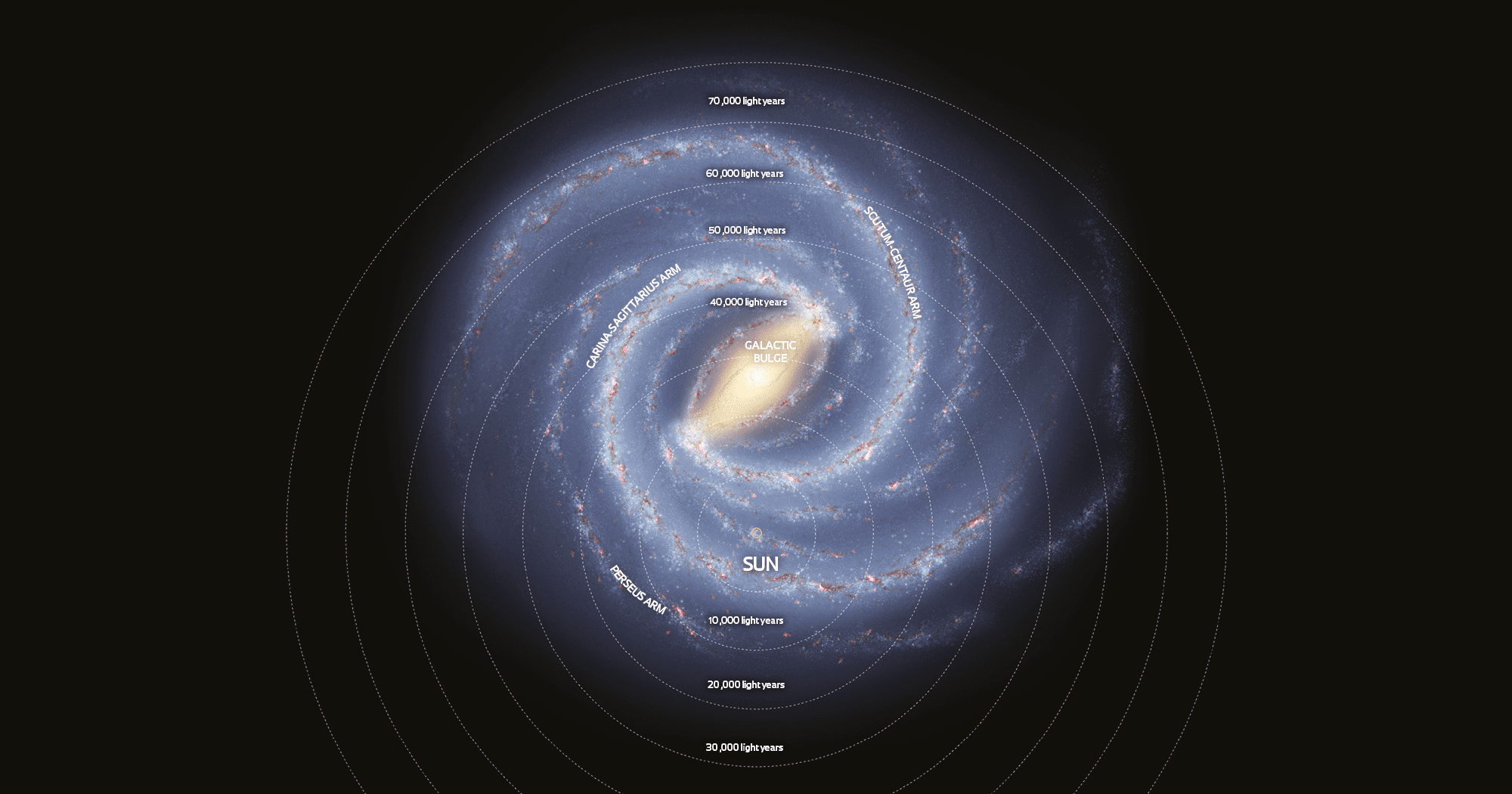 An international group of astronomers directly observed stars from the Carina-Sagittarius arm, located at the top left of this artist's depiction of the Milky Way

The Milky Way, the galaxy in which the Sun and its planets are located, is a gigantic cluster of gas, dust, and somewhere between 100 billion and 400 billion stars, held together by gravity. Astronomers describe it as a spiral galaxy, with a voluminous central region called the bulge, which is shaped like a football, from which curved arms—long bands of stars—emerge, orbiting the galactic center. Astronomers themselves, however, have doubts about the structure of the Milky Way. The gas and dust accumulated towards its interior make it difficult to see the components closer to the center, or what’s located beyond that center (see illustration). It is unknown, for example, if the bulge is made up of one dense band of stars that forms a bar, which is common in spiral galaxies, or whether, in the case of the Milky Way, the bar is doubled, forming an X. It’s also been debated for some time whether the stars of the disc—the thin region around the bulge—are grouped into two or four main arms.

Some of these questions, which are important for learning how the galaxy was formed and could further evolve, should begin to be answered in coming years thanks to the recent discovery of some rare, comparatively tiny areas of the sky that open toward the direction of the galactic disk, and feature low concentrations of gas and dust. Known as low-extinction windows, these regions absorb little light from the stars they hide, allowing most of their luminosity to reach Earth. They are like clean patches in the middle of very dirty glass, which permit telescopes to capture the light emitted by stars on the other side of the galaxy. In an article published online in the Monthly Notices of the Royal Astronomical Society in February, Brazilian astronomer Roberto Kalbusch Saito of the Federal University of Santa Catarina (UFSC) describes what he observed by looking through a specific low-extinction window, WIN1733-3349, located in the direction of the Milky Way’s center.

Nicknamed Oscar’s window, it was identified in 2018 by Chilean astronomer Oscar González, a researcher at the UK Astronomy Technology Centre in Edinburgh, Scotland. González is one of Saito’s collaborators on the VISTA Variables in the Via Lactea (VVV) Survey, which used a telescope in Chile to map nearly one billion stars in the central region of the galaxy. The window discovered by the Chilean astronomer occupies a relatively modest area of sky equivalent to that of a full moon, which is about the same size as the other (approximately) ten known windows. Oscar’s window, however, is of singular importance to astronomers because it is the closest to the galactic center and is located on the same plane as the disk. “If there were perfect observing conditions, this position would allow us to see the entire part of the disc located beyond the center of the galaxy,” Saito says.

They haven’t seen that far yet, but evidently have already seen what is on the other side. On a star map created by the VVV, Saito searched the stars located in the direction of Oscar’s window. He identified three groups of red giants, a type of star of whose known brilliance is used in calculating galactic distances. The first and closest was 24,500 light-years from the solar system, in a region where the disk merges with the galactic bulge; the second group was 32,500 light-years away, inside the bulge; and the last is 44,800 light-years distant, on the other side of the galaxy. “Through this window, we saw stars from the galactic disk, the bulge, and even the spiral arm on the other side of the Milky Way,” says Argentine astronomer Dante Minniti, from Andrés Bello University, in Chile. Coauthor of the current study and coordinator of the VVV, years ago Minniti found another of these windows, named WIN 1713-3939, or Dante’s window, which is also close to the galactic center.

These windows, the Argentine astronomer believes, should make it possible to directly map the spiral arms located on the other side of the galaxy, called galactic antipodes, and to resolve doubts that have lasted decades. In the mid-1920s, observations by American astronomer Edwin Hubble (1889–1953) pointed to the existence of other galaxies besides the Milky Way. Hubble also proposed a system that classified galaxies by shape. Over the following decades, various research groups dedicated themselves to surveying the stars and characterizing the structure of the Milky Way.

However, the mathematical models used to predict the galaxy’s structure—with either two or four spiral arms—are based on data that were almost always obtained indirectly. Some of these data come from mapping the gas clouds that are scattered across the galaxy, and indicate where stars may exist. Other data derive from mapping the stars located in the same galactic hemisphere as the solar system. This distribution of stars is then projected to form the other half of the disc, and assumes the galaxy is symmetrical. “Very little of our information results from the direct observation of stars located beyond the center of the galaxy,” explains Saito.

Using direct observations of stars seen through Oscar’s window and two other windows further from the galactic center that are also located in the disc’s plane, Saito and Roberto Kammers—who completed his master’s degree under Saito’s supervision—analyzed the distances and movements of stars located beyond the bulge. Although not yet published in a science journal, the results suggest that they are seeing one spiral arm of the disk on the galaxy’s far side. “Various information indicates that we are looking at the innermost spiral arm located beyond the bulge, the Carina-Sagittarius arm,” Saito says. Another study conducted by Saito and Minniti, in collaboration with Kammers, analyzed the distribution of the stars in the galaxy’s bulge that were observed by the VVV Survey. In an article recently submitted for publication, they concluded that the center of the Milky Way contains a double bar shaped like an X, as was proposed by Italian astronomer Manuela Zoccali and American astronomer Andrew McWilliam in 2010.

By peering through low-extinction windows, astronomers hope to better characterize the structure of the Milky Way. “The study is important for improving the models that tell us how many stars there are in the Milky Way, how they are distributed, and for improving our models of the galaxy’s evolution,” comments astronomer Hélio Perottoni, who is completing a postdoctoral internship at the University of São Paulo and specializes in the structure of the Milky Way.