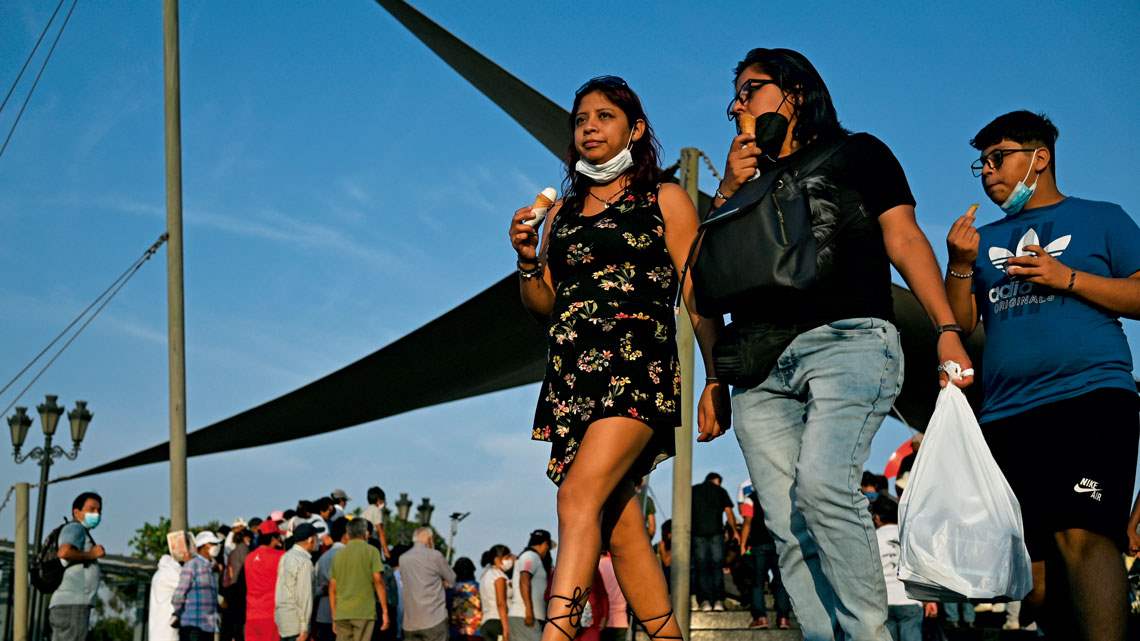 Two women enjoy ice creams with masks pulled down to their chins in Lima, Peru, in early April

The official number of new COVID-19 cases and deaths has been falling weekly worldwide since the end of March, according to data from the World Health Organization (WHO). Between April 11 and 17—the most recent period for which global data was available at the time of writing—5.6 million cases and 18,200 deaths were recorded, down 24% and 18% respectively from the previous week. These encouraging figures have led to lots of countries further reducing restrictions, which were already being relaxed, with a good number even ending the mandatory use of masks in most situations, especially in open spaces.

Although outbreaks of cases and small increases in deaths are still occurring in some areas and countries, such as parts of China, the end of the pandemic, or at least a change of its status to a global endemic, is now being discussed as a possibility in the near future if there are no major surprises in the coming months. “Making predictions about the pandemic is always risky—the probability of making a mistake is high. Having made that caveat, it is implicit—at least in my opinion—that we still do not have the scientific evidence needed to declare the pandemic over,” says Eliseu Alves Waldman, an epidemiologist from the School of Public Health (FSP) at the University of São Paulo (USP). According to the scientist, it is important that we monitor patterns in COVID-19 cases and deaths in the Southern Hemisphere in the coming winter.

We must continue our efforts to reduce transmission of the coronavirus, argues Waldman. “Despite the clear differences between the two diseases, if we want to imagine what endemic COVID-19 might look like, we can look at the transition from pandemic to endemic AIDS at the beginning of this century. The accumulated scientific knowledge, measures designed to prevent transmission, and the introduction of effective treatment options have all helped reduce the number of new cases and deaths and led to an increased chance of survival and improved quality of life for people infected with HIV,” explains the USP researcher. “But measures for preventing HIV transmission, such as using condoms, are still recommended. We should expect something similar with endemic COVID-19.”

Epidemics are defined by significant increases in the number of cases of a disease in a population or area compared to its normal incidence. Pandemics are the same phenomenon but on a (nearly) global scale. Endemic status, which COVID-19 appears to be heading toward, indicates that an infection or health problem is recurrent or chronic in an area, but with a foreseeable incidence rate and a consistent pattern of repetition within a certain period, with no unexpected elevations (see graphic).

Roughly 60% of the global population has been fully vaccinated against COVID-19 and one in 16 people on the planet has been infected with the novel coronavirus. This suggests that today, more than two years after the first cases of COVID-19, much of humanity has antibodies against SARS-CoV-2. Although reinfections are possible and the exact level of cellular immunity conferred by exposure to the virus and vaccines is unknown, it is reasonable to assume that the pandemic will progressively—but not necessarily linearly—become less severe in the near future. “It is likely that new variants of the coronavirus capable of circumventing existing immunity in the population will emerge and cause resurgences of cases. However, this process is unlikely to be followed by a significant increase in deaths,” says Waldman.

Fernando Spilki, a virologist from Feevale University in Rio Grande do Sul and coordinator of Brazil’s National COVID-19 Omics Network (Rede Corona-ômica BR), believes there is no single exact parameter to signal the end of the pandemic. “People want the coronavirus to disappear from the planet once and for all, but that’s not going to happen,” says Spilki. The incidence patterns of infectious diseases such as AIDS, tuberculosis, and malaria indicate that some pathologies can continue to affect global society for a long time. “The number of deaths caused by COVID-19 will probably start to equal flu deaths. That could be an indication that the pandemic phase of the disease is nearing its end. But this health crisis will not be ended by decrees,” comments the virologist.

On April 22, the Brazilian Ministry of Health signed an ordinance officially ending the national state of emergency that had been declared as a result of the pandemic. At the time, the rolling average number of deaths was around 100 per day, a low number. The index represents the average number of daily deaths over the last 14 days.

The current health crisis caused by the novel coronavirus bears similarities and differences with the Spanish flu pandemic of 1918. The world was clearly different back then and so was our knowledge of science. A century ago, for example, the flu virus had not yet been isolated, nor was there a vaccine for it. As a result, this aggressive variant of the influenza virus infected one in four people worldwide, killing an estimated 20–50 million, equivalent to 2–5% of the global population. COVID-19 has so far officially caused 6.2 million deaths, less than 0.1% of the world’s inhabitants.

“The Spanish flu pandemic ended after it spread through the entire population,” said American historian Christian McMillen of the University of Virginia, USA, in an email interview. The implication is that a form of herd immunity was achieved. In the last quarter of 1918, the Spanish flu—caused by the H1N1 subtype of the influenza virus—began to become less of a problem. Deaths plummeted. Cases too. And life returned to normal.

In his 2016 book Pandemics: A Very Short Introduction, McMillen explains that there is more than one way for a pandemic to end. The book examines major health crises that occurred in the past, from the bubonic plague in the Middle Ages to more recent diseases. Some of these health emergencies have still not completely ended. “Tuberculosis, malaria, and AIDS are current endemic pandemics, as I labeled them in the book,” says McMillen. 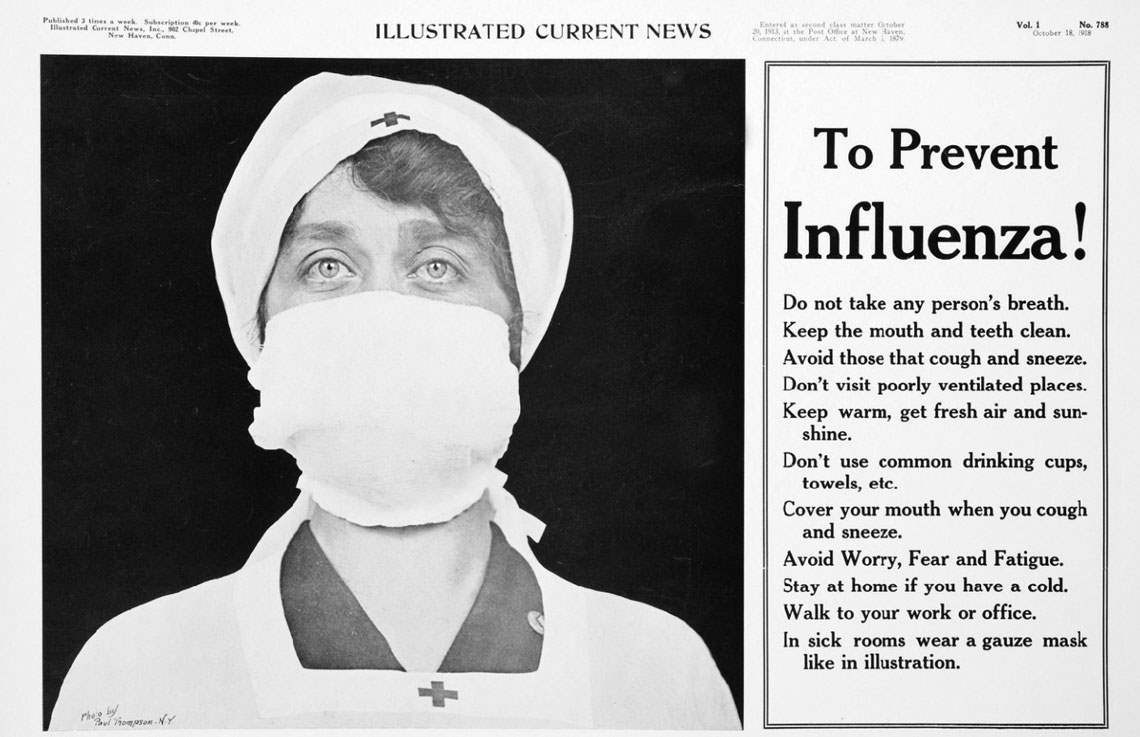 In the middle of the last decade, tuberculosis killed more people than at any other time in history, according to the historian. Official figures from the WHO recorded 1.8 million deaths from the disease in 2015. In 2020, in the first year of the COVID-19 pandemic, it killed 1.5 million people, of which 214,000 also had HIV. These are high figures. Tuberculosis, now treatable, is one of the oldest recorded diseases. Researchers have already identified lesions caused by Koch’s bacillus, the mycobacterium that causes the lung disease, in a 500,000-year-old skull found in what is now Turkey.

Of all the pandemics humanity has faced, none has been more frightening than the bubonic plague, known simply as “the plague” in the fourteenth century. The disease is transmitted to humans by fleas from rats infected with the bacteria. The plague first emerged in China and hit Europe in the mid-1300s, as documented in a book by Italian writer Giovanni Boccaccio (1313–1375). “It is an unparalleled book on the representation of the plague. Boccaccio didn’t know what caused the pandemic. Faced with the onslaught of the disease, all of humankind’s wisdom and ingenuity was useless,” recalls McMillen.

For those who are tired of living with COVID-19 for more than two years, the story of the plague could be discouraging. There were three major waves of the disease, which was a major health concern for a very long time. “England recorded cases between the years 1340 and 1666 and then never again,” says the historian.

It is difficult to predict what will happen with COVID-19 in the immediate future, let alone the long term. Spilki says there are some paths that should be followed to help ensure the pandemic continues to ease. “The coronavirus will carry on circulating. But collective efforts are needed, to give regions in Africa or the Americas better access to vaccines, for example. Even in China, there is an older population that has not yet been immunized. These are things that need to be monitored,” says the virologist from Feevale. “We can’t have too many illusions about the new normal. Global safety needs to be one of the top priorities.”

Experts warn that the potential legacies of the current pandemic on society and public health, such as the voluntary use of masks in enclosed spaces by people when they are sick, seem to have been quickly abandoned by significant portions of the population as the numbers of COVID-19 deaths and cases has fallen. In the same vein, international agreements on manufacturing and distributing vaccines to the poorest countries have not been successful in providing immunization to the most needy populations across the globe. All this seems to indicate that the lessons learned from other pandemics, from the Middle Ages to the present day, are being forgotten. “We must not be discouraged, but we should not necessarily be too optimistic,” acknowledges Spilki.